Yesterday was another rainy, gloomy day. Hence, no Friday yard sales. Today's forecast called for warmer temperatures (!) and sunny skies (!!), so I decided to check out Craigslist for any local sales. I found a Church Sale that was only about a mile away. This morning it was still cool, but it was finally dry, so we decided to head out.
First stop was the Church Sale - lots and lots of stuff scattered from one end of the parking lot to the other. As I went from table to table, I noticed that things either weren't marked or they were randomly marked with stickers, masking tape, magic marker - a little bit of everything. I decided I better inquire about the prices before I started picking things up. When I did ask, the ladies told me to gather up what I wanted and to just make a "love offering" of what I felt was appropriate and what I could afford. Now, normally, I hate sales where things aren't priced, or they ask for donations. But, I felt I could gather up what I wanted and pay a decent amount that I was comfortable with and not feel cheap for offering too little or like I got taken advantage of since it was "a donation".
So, what did I get? And, what did I pay? Let's see... 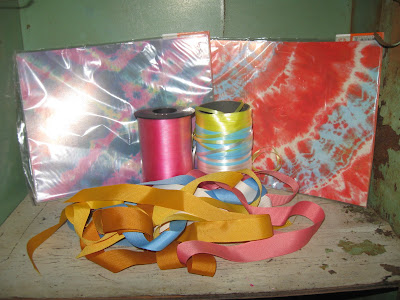 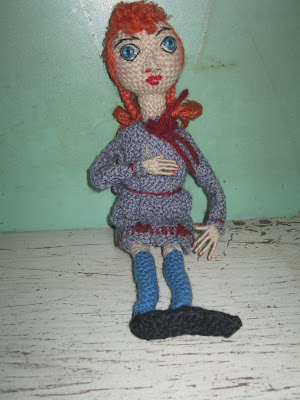 A hand made knitted doll - her fingers are amazing - tiny and well made. 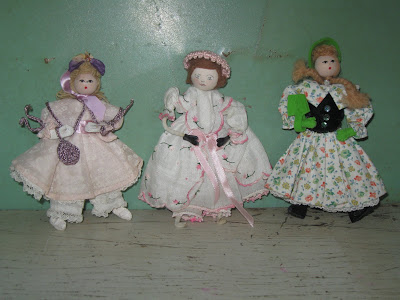 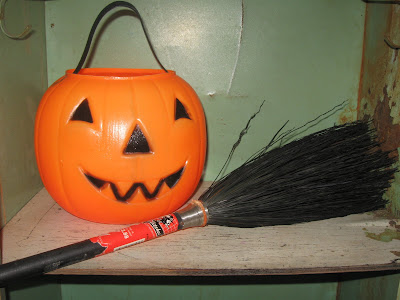 An older Empire blow mold Trick or Treat pumpkin and a old child's witches broom. I think I had one of those brooms for Halloween when I was a kid. 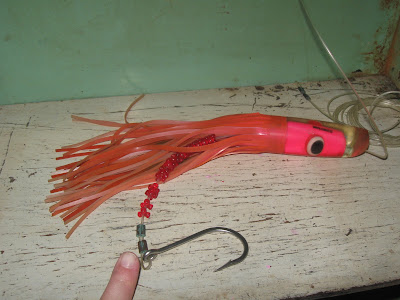 A giant fishing lure - see my finger? It's HUGH! (I know how to spell HUGE, but I see it all the time - HUGH SALE!) Back to the lure - not sure what on earth it is - a store display? I know one thing, that giant hook is SHARP. 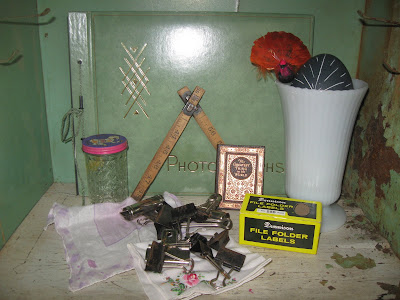 Old Photo album with black pages, old jelly jar, slide rule, small book, milk glass vase, Emu Egg, small feathery bird, two handkerchiefs, lots of old binder clips with a bit o' rust on them and a box of Dennison labels. I normally don't "do" milk glass, but this is a nice vase and I am always needing a vase for my Zinnia's that I cut in the backyard. 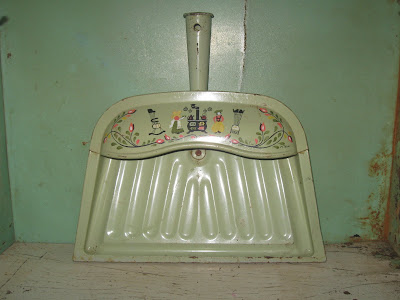 This old metal dustpan brought back a childhood memory the instant I saw it. I don't think I've ever seen one at a sale before, but when I saw this one, I remembered that my Mom used on like it when I was kid. I'll probably use it when I sweep the porch.
Not pictured are 42 pieces of jewelry still in their original packages - necklaces, earrings, bracelets - nice stuff. Each one had a $9.99 price tag on it. There were probably two hundred packages, and I am slightly kicking myself for not getting them all.

Now, here's where it gets interesting. I walked past a cardboard box many, many times and saw a garish brass light fixture sticking out. But, one more walk past and the sunlight hit inside just right, and I saw a crystal. So, I looked all the way in. 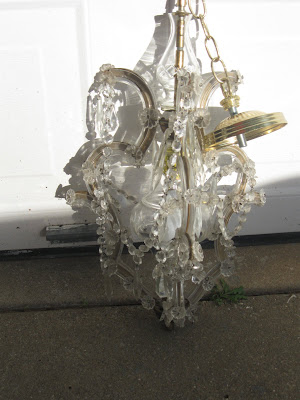 A chandelier! A good one - a very old one too - one with lots of crystals and drops. Someone had rewired it with a new cord and fixture, thus the garish bright brassy top. When I got it home, I discovered that the glass curvy parts that covered the metal parts were all broken, but the crystals, drops, flower shaped glass discs and all the crystal pieces were in great condition. So, I dismantled the entire thing and now I have a HUGH (ha) bag of crystals. 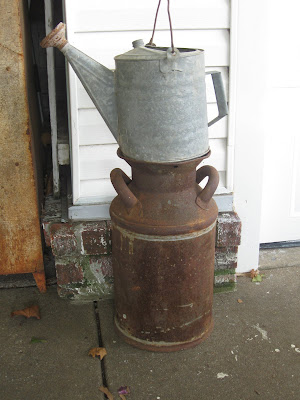 The old watering can was the first thing I picked up when we got there. The "Cream City" can was sitting in between two PODS that they were using for storage. When I went to pay, I asked the lady if the can was for sale. She said she really didn't know, but surely it must be since it was there. I decided I better see what my "Love Offering" was going to be before I got the milk can or anything else. I decided I would offer $20.00 and see what they countered with - but the lady said, "Oh, my goodness, that is more than generous!" Then I said, "Can I grab the milk can too?" And she said, "I thought you were including that already." 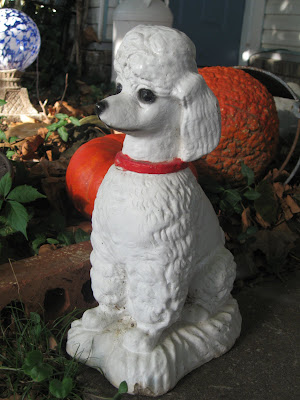 When I went to grab the milk can I spotted this funny concrete poodle too. I offered more money, but she wouldn't hear of it. I'm not really a Poodle kind of gal, but I think she will look just dandy sitting by my retro pink glider.
So, how did I do for $20.00?
Posted by Shara at 9:43 PM