When I was growing up, we had a lot of cars. My Dad would buy one and we would drive it awhile. A few weeks, a few months, maybe even a year and then he would sell it. Sometimes he would buy one and sell it a few days later. Sometimes my Mom couldn't find her car at the grocery store because she couldn't remember what she had driven there.
This is only a small part of the ones that I actually remember us owning....
Red Cadillac
White Cadillac
Green Cadillac
Black Cadillac
1937 Oldsmobile
Red Volkswagen Beetle 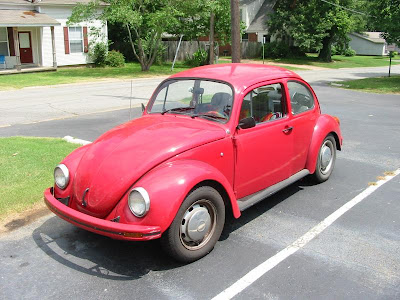 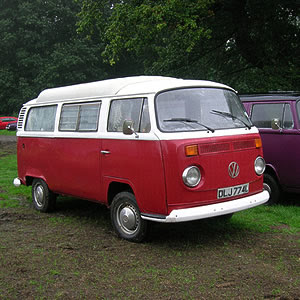 Gray Thunderbird
Blue 1973 Mustang
Brown Mustang
White Subaru
MG Sprite
MG
These are just the ones I can remember. There were more. Many more. One time when I was just a baby we were living in Kansas. We had this very long driveway and I think the story was that he had six cars parked one behind the other. He went out to leave for work and the back one wouldn't start. He had to call a cab (or ride his bike, I can't remember) to take him to work. This was very unsettling to my to mother who was not happy about having six cars in the first place.
My dad got off work at 3:00 in the afternoon, so he often picked me up from school. I never knew what he would be driving, so I picked a parking spot across the street at a Church for him to wait for me. That way I could always find him now matter what he was driving. One day he picked me up in an old chippy peeling paint pickup. My crush was walking with me and I was mortified that he saw me getting into that truck. Ack! I begged my Dad not to ever pick me up in that again! The next day he picked me up in our cherry red 1963 Split Window Corvette. 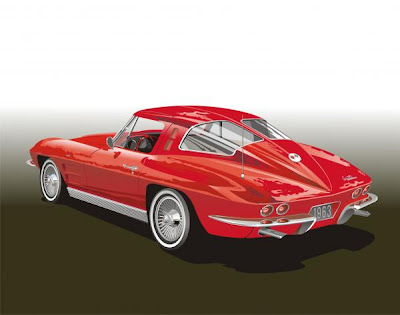 Much better. The crush was impressed! (Sadly, only with the car.....)
So, with all these strange cars coming and going, I never knew quite what to expect to see in our driveway on any given day. You can imagine my horror when I got off the bus one day and saw this in the driveway. 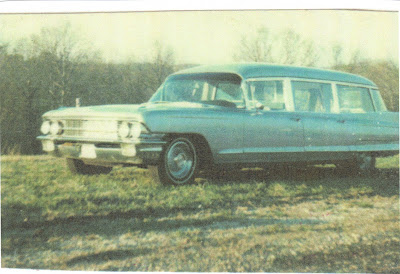 A hearse! A real honest to goodness hearse complete with a million little doors and pockets in the back that we never, ever ever opened the entire time we owned it. Ever. My dad was under strict orders to never, never, ever, ever pick me up from school in the hearse. Ever. I don't remember him ever doing it, so he either didn't do it or I have blocked it out and it will come out in therapy one day. I do remember that he would load up his buddies and they would go through the drive up window at the local donut shop and order through the driver's window and then pull up a bit so the guys in the back could order too. They found it hysterical. The donut lady? Not so much.

And, after all these years, I still never know what my Dad will be driving when I see him pull in my driveway. As long as it isn't a hearse - that's fine by me.

*All photos gleaned from the Internet but are exactly what we had. The Hearse photo is our actual car. Why I only have a photo of that one, is beyond me!

**I was going to title this "Little Red Corvette" by Prince, but that song is so totally not about a car. Oh my! We never actually had a pink Cadillac, but man, that would have been so cool!