This, That and The Other & A Mean Guy

Tuesday was another long day for The Breadman. Today he is very discouraged and very quiet. And for me to say he is quiet is a big deal because he is not a talker in the first place. His job has always taken precedence over everything else and always been foremost in his mind. Now he says he just wants to run away from it all. I think it will get better once he gets into it, makes some changes to the route and makes it more his. I wasn't really complaining about the long day or the pay cut (it's small, we're fine) even though that is rough. It's just that you guys understand how it is to be in the same house as a cranky man, right? NOT FUN.

This morning I made my first Craigslist purchase. I am always looking on Craigslist, but I've never bought anything. I've seen a few things that tickled my fancy (like a stack of old metal picnic baskets that I couldn't afford), but never anything that I really needed. Well, yesterday I was going through the listings in my town and spotted a very nice upright freezer for a song! It is practically new, still has the tags inside and everything. It is sitting in this guys garage bone empty except for the top of his daughter's wedding cake on the top shelf. (I'm hoping he forgets to take that out. Wedding cake! Yum!) It was cold and rainy today so we made arrangements to pick it up on Sunday. I saved about $600.00 by finding it on Craigslist. I'm hooked now!

I made a quick run to the thrift today. The lady that runs it was all upset about the new laws about toys and stuff that went into effect today. They had just cleared out the entire toy area and trashed it all. I don't completely understand the whole thing, but it seems like a real mess and a whole lot of toys headed for the landfill. She was asking my advice on things (she seems to think I am a big time reseller), but I didn't have much advice on the matter. 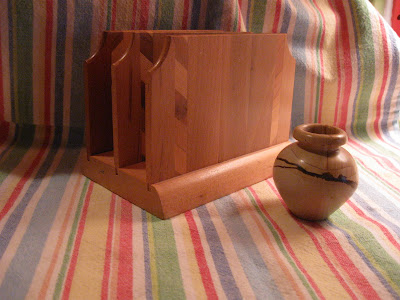 This old 50¢ letter holder has neat edges and wood inlay. I'm already using it to hold my incoming/outgoing Valentine's. Or as The Bean's third grade teacher said, Valen-times. Ack. The little $1.00 vase is just the right size for my little collection. But, this one is made of stone and that is a first for me. 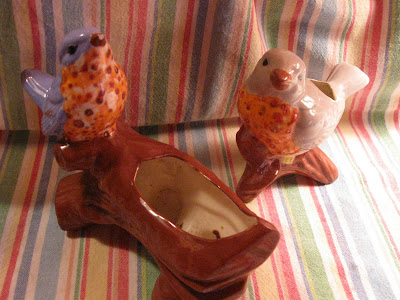 I never, never, never, never, never buy homemade ceramics because they are usually butt-ugly and look like, well, homemade ceramics. But, this little pair of birdie planters were just too stinking cute. And, at only $1.00 for the pair, I just had to bring them home. I am really on a bird kick lately anyway.
After the thrift, it was time for Unified Volleyball practice for The Bean. I don't think I have mentioned that he was started playing again this year. The Coach was his PE teacher from First to Fourth grade and she still invites him to play even though he is homeschooled. He really enjoys it. This year he has moved onto the Senior Team which is 7th through 12th. The Breadman and I help coach 4th - 6th grade. (I am so not a sportsman.) We have practice every Wednesday from 3:00-4:30.
Today the Coach was going to be late so she asked me to go early and set up the nets and stuff. So, we get there about thirty minutes before the kids and find the doors locked and the entire high school girl's softball team inside practicing hitting. I knocked on the door until the Coach came over. I said, "We are here to play Volleyball." He said, "We are here every day. We will be out of here by 4:00. Come back then." Oh, no he didn't! He only saw the three of us and four little fourth grade boys so I suppose he didn't think it was that big of a deal to toss us out. But, I knew that we were supposed to have the Gym today and not his softball team. I really didn't know what to do since I had 59 other kids on the way from three other schools and no way to contact them. Not to mention all the parents that wouldn't even be there until 4:30 to pick them up.
I finally found the Principal and she offered to let us practice in the cafeteria. Now, I don't know how many Volleyball games you have been to, but it is not a sport that was meant to be played in a cafeteria with a low ceiling. We would have broken out the lights in a matter of minutes. Plus, this is the Unified team which means that it is half Special Olympic Athletes and half Team mates. Some of those kids, both Athletes and Teammates can't hit that ball for squat. It would have been a disaster. I finally agreed to let the kids go into an empty classroom out of the freezing cold and rain until we could decide what to do about everything.
In addition to me and The Hubs, there is one other Coach from the High School that coaches the Senior kids. Let me just say that he is strict. And he can be very, very nice and he can be very, very, very scary when he wants to be scary. So scary that when he was a teacher at the Elementary School, I had to pull The Bean out of his class because he was absolutely terrified of the guy. Not long after that they moved him to teach the older kids. He's just that scary! (I digress. Is anyone still reading this? Hello????) That Coach hadn't made it yet, so I decided to see if maybe, just maybe, he could handle the Softball Coach.
When he got there he saw us standing outside and said, "What's up?" We told him that the Softball Team was in there and the Coach said they were not leaving. He said, "Oh. They. Are. Leaving." Minutes later we were in the gym, nets up volleying as usual.
Sometimes it's nice to have the mean guy on your side.
If you haven't been over to Sarah's lately - be sure to visit this week to see all the fabulous goodies we all made and received in her Heart To Heart Swap this year. I made little glittery paper treat cones that she showed today. There are some really talented ladies out in blogland. It was such fun to open a box chock full of Valentine goodness all made by different crafters.
So, how's that for a post that went every which way but loose? ;o)
Posted by Shara at 9:28 PM