He Works Hard For Less Money

The Breadman had some job changes recently. He still is The Breadman, he's just The Breadman with a new route. He had been extremely local for the past ten years. Now he has to drive to Oklahoma everyday. That's not as bad as it sounds - we aren't too far from Oklahoma - about 40 miles or so. He left the house this morning at 1:30 AM and got home at 6:00 PM. He had help all day too or he would have been even later. He was in a new area and didn't know where things were so they had to drive around aimlessly until they found the next place on the route. I mean, he had a rough idea where things were, but hadn't ever been to these places in the past. And, it turns out, since the guy that had the route before him was laid off due to the job changes, he didn't do a damn thing the past two weeks. No bread picked up, no racks picked up, sale ads ignored, etc., etc. So, not only did The Breadman have to work himself nearly to death, he had so bend over backwards and apologize for the lack of service they had been receiving and promise them that he would take better care of them. The kicker to this long awful day is that he is now making about $100.00 less a week than he was in the past. More hours, harder work, less money. Yea, that's the ticket. (It will pick up in the summer when bread sales soar, but until then, geesh...) 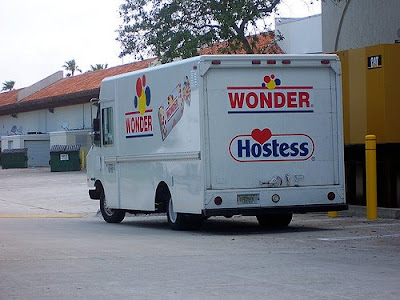 The Bread Mobile
The reason for the job changes is that Interstate Brands aka Wonder Bread was baking all the Great Value Bread for all the Wal-Mart stores. They had been doing this for fifteen years. Suddenly, Saralee came in and made a lower bid and took over the Great Value line. Now, I know this may seem trivial and boring, but it really made an impact on our lives since Wal-Mart is The Breadman's main stop and pretty much supported our family. Plus, this means that a new company is making the Great Value bread and it will be different than consumers have been buying and eating and probably liking pretty well. So, if you try the bread and don't like it - TELL SOMEONE!!!!
It also rained today and The Breadman hates to be wet. Hates it. That is an understatement. He is a bear when it rains and he has to be out in it. So, rain compiled with a longer route, a longer day, less money and rain equals one terribly horribly cranky Breadman.