'Twas The Night After Christmas 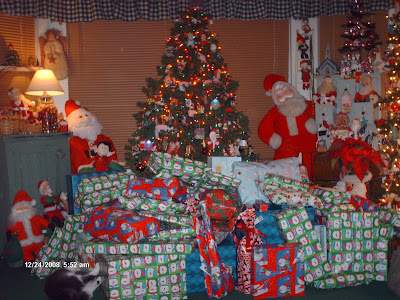 Well, Christmas is over. Been there, done that. Guess how many people participated in this gift exchange at my house? 20? 30? No, only five of us. (We bring the presents in about five minutes before we open them so it is a big surprise to see them all)
The Breadman came from a house with little means and two parents that never made holidays special. On his birthday, he would get a Wal-Mart bag with a card in it and one gift. Something like a pair of shorts or a T-shirt. It was never wrapped either - just in the bag with the receipt because it didn't matter what size he needed, they just bought it and he had to deal with it. That was when he was old enough to do exchanges. Before that he pretty much got a football every year. Santa never visited, he never had a stocking, the Easter Bunny never came and left an Easter Basket. Instead, he could pick out one of those pre-made baskets at the store (you know the ones that look stuffed with goodies but it really only has a coloring book, some crayons and about three pieces of candy in it?). I always felt sorry for him for not having fun holiday memories. But, then again, he never knew he was missing anything, so he was a happy guy. I have a photo of him when he was not even three and he is all happy and smiling and running in his yard. It makes my Mom cry because he just looked so damn happy and he didn't know he had a sad poor life.
So, the point of that depressing little story is that I make holidays a BIG DAMN DEAL. I don't care if The Bean ever remembers any of his presents, but I know he will remember the pile of presents, everyone coming together, our meals, making candy, baking cookies, decorating our Gingerbread house (that we buy after Christmas and decorate for Valentine's Day), etc. etc., etc. It took The Breadman a few years to get the hang of it, but he gets it all now. He pretty much only buys for me, I buy for everyone else. But, he does a good job. I get more than one thing, And he wraps them! Yea, Breadman!

So, what did he buy this year? 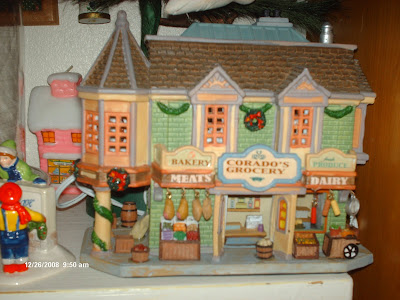 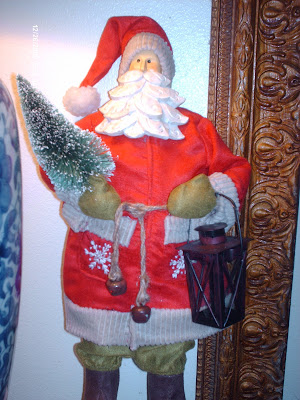 A Santa for my Santa collection. Actually, The Bean picked this one out. And, even though it killed me to find out he bought this the day before Christmas at full price and today it would have been half price, I still like him. I was told that this Santa was chosen because he is holding a rusty lantern and he looks old. One point for the rust factor. 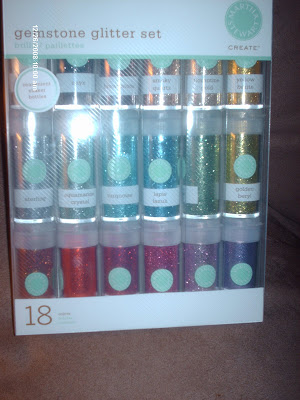 The Mac Daddy Martha Stewart Glitter Pack. Eighteen bottles of super fine wonderfully colored glitter for all my glittering needs. I had admired this at the store one day, but never thought he would a) hear me or b) remember it five minutes from then or c) actually buy it. But, he did all three. This is especially interesting as I rarely ever do anything crafty when he is around nor do I show him my crafty things I make. Three points for glitter!

He also bought a professional candy thermometer which I had mentioned outloud a few times, a Calaphon Dutch Oven (which I will try to think of as thoughtful, but jeez..a pan????) and a $30.00 Gift Card for El Yum-O Chick-fil-A. Two points for the thermometer, three points for the Chick filA gift card and minus one point for the pan. So, how did he do in all? Ten points! Yeah! (I do appreciate the pan, it's just that I bought an entire new set of Farberware pans not too long ago.) *Edited to add that he was the recipient of many, many goodies, almost all bearing a Razorback insignia of sorts. He is difficult to buy for, so anything Razorback usually fits the bill. 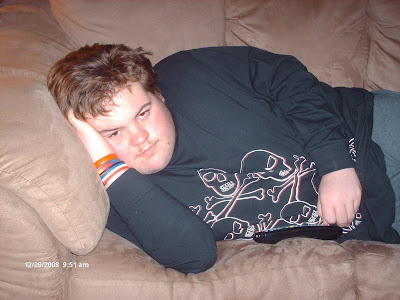 The Bean is having tummy trouble - I hear a stomach bug is making the rounds. No throwing up or anything, just general yuckiness. He has to feel better soon as he has a slew of new board games, electronic games, DS games, DVD's, books, a bright orange IPOD Nano and a, dare I say it, an Electric Guitar waiting to be played, watched, read, loaded and fired up.
I hope everyone had a Merry Christmas. I know it's not about the gifts or any of that - it's about family and memories. And, I hope you have lots of those to get you through until next year.