It Was Still A Great Day

Friday, The Bean and I passed by a road with a sign pointing to a "Lake" that I have seen for 25 years, but never investigated. You know about that whole "Road Less Traveled" business. So, we decided to go see that Lake. When we got there, there was a new bicycle and walking trail that had been recently completed over the dam. We walked about a mile on the trail until it took a couple turns and curves. I was very surprised when we came to a huge iron bridge with a big waterfall running underneath. It was beautiful. I can't imagine that I never knew it was right there. 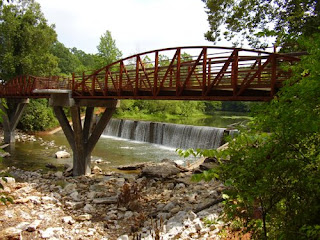 Oh, the magic of Google - Here is the bridge and the waterfall. The Mall is just on the other side of the highway. I still can't believe this is right there!
(I took a ton of photos, but, alas, they are on the camera that I can't unload on this old computer). We sat on the park benches and watched the water for quite awhile, then walked the mile back to the car and went home.

When we got home and I had brought in all the purchases of the day, I went to put my purse and keys up. That's when I noticed that I didn't have my cellphone. Crap. I called it, but I couldn't hear it ring, so we went to the car and tried again, but it wasn't in there either. Crap. It had to be on that darn trail. I grabbed my purse and we went back to the lake, not bothering to change out of our "stay at home" not so attractive clothes and shoes. It was Friday afternoon - a few minutes before 5:00 pm and I had to drive completely across town including traveling on the Interstate, which I just do not do. Especially at Rush Hour. But, I wanted to get there, find the phone and get home. Along the way, I commented that I wish I would have at least grabbed my watch, I felt naked without it.

We got to the Lake and retraced our steps. All our steps. But, no phone. We called it to see if maybe it would ring in a ducks mouth or something. I really don't know what our logic was at that point. We even visited the Bait Shop at the Lake to ask if anyone had turned in a phone. The aging bald headed (but very nice) man said he hadn't been there long, "But, let me call Mama." He called Mama, asked her about the phone, thanked her, added in an "I love you Mama" and told me no phone had been turned in. (It was worth the whole trip back just to hear that little chubby bib-overall wearing guy tell his Mama he loved her).

I decided to give up and hope and pray that someone had found it and would call me later to return it. We drove home, checked the messages to no avail and called the parental units to let them know that I no longer have a cell phone. DH came home and we discussed what to do because my contract is just about to expire and my plan isn't available any longer so we are trying to stay under the radar until they figure that out and raise my bill. I didn't mean to lose it. DH recently dropped his cellphone in the toilet as it was swirling in a flush. That cost us a cool $50.00. We decide to give it until the next day before we cancel the phone, just in case someone calls to say they have found it. I mourn for my photos that I never learned how to download and I wonder how I will find all the lost phone numbers in my Phone Book.

I walked into the bedroom to take off my watch, but as I remember I am not wearing it - I look on the dresser and there is my watch with my cellphone laying right beside it. Seriously.