This morning I had quite the interesting email. I was contacted by the Producers of "Wife Swap" on ABC to be a part of the show. They had found my blog and contacted me. They are looking for Garage Sale/Thrifty people to be on it. I love "Wife Swap", it's one of my favorite shows, but it is definitely something I will be not doing. Lordy, I'd have to move my piles of treasures and they'd have a heyday with the whole DH working 90-100 hours a week thing. I will admit that knowing that TV Producers were reading my blog was quite the thrill! She complimented me on my blog, so that was pretty cool, to say the least. I did promise that I would send the word out to all of my Thrifty Peeps in case anyone else wanted to be on the show. (Contact me if you seriously want the info.)
I told my Mom about "Wife Swap", who was floored and it left my Stepfather speechless- and that's a big deal. He's a talker! But, when I asked my Dad, the non TV watcher, if he had ever heard of "Wife Swap", he said, "That's a sex show, right?" Yes, Dad. It's a sex show and your daughter is going to be on it. I couldn't hardly even tell him they wanted me to be on it after he said that. Patooey. 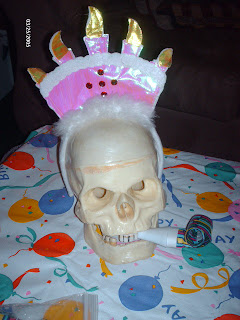 Because I don't like photo-less posts...
Some of the decor from my Birthday Party - courtesy of The Bean.

My stomach issues seem to be gone, but now I have all over flu like symptoms. Today I commented that my hands felt like ice, but in reality they were really hot. I took my temperature and had 101.4. It was about 98 degrees outside today, but I spent the day on the couch wrapped up in two huge heavy polar fleece blankets shivering. I feel better tonight, and think I will feel even better after a good nights sleep - I only slept about three hours last night. I watched a ton of Infommercials. Man, they sell some crap in the middle of the night. And, for anyone that read the E. Coli comments - I do live fairly close to where that happened, but I've never been there. Just the flu/bug/virus crap. But, I do appreciate the news.
Posted by Shara at 9:35 PM