The Night The Lights Went Out

The other night, I was standing in the shower all shampooed up (well, just my hair anyway)with my eyes squeezed shut when I realized it suddenly was very dark in the room. I got the shampoo out of my eyes and peeked out the shower door. The night light was still on so that meant the power was still on. I did the old "Shave and a Haircut" Knock*knock*a*knock*knock* on the shower wall which is code in our family for, "Help," "I forgot underwear," "I forgot a towel," "I forgot my underwear and my towel." The Bean came to my rescue and asked through the door (you can't see the shower from the door, don't worry)why I was showering in the dark. I told him that I hadn't been. The switch was in the "On" position, but was clearly "OFF". We had been having problems with having to flick it after turning it on to keep it on. I knew we would have to have an Electrician come out and rewire it one of these days. When we had the Electrician come help install the Air Conditioner, I was sick that I still had a tricky light switch even after paying him $350.00.

So, I decided to take matters into my own hands. The next day, I flipped off the circuit breaker and took off the switch plate (dropping my beautiful porcelain switchplate and smashing it to smitereens in the process). I tightened up the wires and the screws, but when I turned the circuit breaker back on, it was still wonky. And, maybe even a bit more wonky than it was before I looked at it. I decided it needed a new switch and not just tightening.

That required a trip to Lowe's. Simple enough. Ha. When I got to Lowe's I found the blue sign that said "Electrical" and entered an aisle with nine eight foot long sections of electrical switches. It was also packed with men in white t-shirts and painters pants with drywall sticking on them and paint in their hair throwing around fancy terms like "Two 20" and "One 10" and "copper wiring". I felt a bit overwhelmed. I came close to pushing that "NEED HELP" button, but I decided to close out the world and read the descriptions on each and every one. This was a difficult because on the other side of the aisle was the Doorbell demo area and The Bean proceeded to demo each and every doorbell in the joint. Including the one that played the entire "Hallelujah" Chorus.

But, I prevailed. I finally found the switches (there are light switches and lighted switches, which light up and would be helpful, but we are not wired for those) and sorted out the heavy duty switches from the regular switches and the dimmer switches and the three way switches and the zzzzzzzzzzzzzzzz. Wait, what was I looking for? Oh yes, Single Light, Single Switch, Copper Wire Switches.
Finally, I found the single switch for a single light switch, found copper wiring switches and found a white switch. Wah-lah! Perfect. But, wait, we have a bathroom fan switch under the same plate. And, it's almond. "Oh what the heck, I'll replace them both!", I said. Obviously the pretreated lumber fumes had gotten to me at that point.

On the way out I ventured by the switch plate covers and saw that my fancy bathroom plate that I had paid nearly $15.00 for was on Clearance for $2.98, so I grabbed a new one. What the heck.

I returned home, got my trusty Phillips and Flathead screwdrivers and pliers and turned off the circuit breakers once again. I even rigged up a lamp on an extension cord and ran it down the hallway so I had full-on bright light instead of trying to hold a flashlight. (Smart, right?) I unhooked the old light switch, rewired the new switch, unhooked the fan switch and rewired it too. Went to the garage, turned on the circuit breaker and guess what? 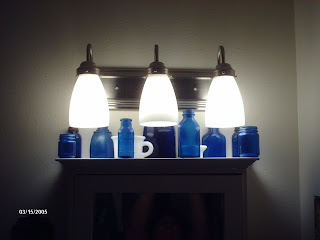 Light that stays ON!

*Pat*Pat*Pat* That's me, patting myself on the back. And, I'm not bitter, but the old DH didn't even say "Good job" or "Wow" or "Thanks!". Not a word. Jealous, is my guess. Something about "manhood" and "testosterone" or some other crap. 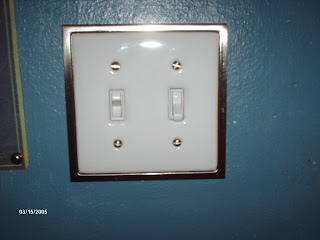 I wonder if I could have installed that new A/C unit?

In the words of Reba, "Craaaaaaaaaaaap."