Shop 'til You Drop

(Pssssst. Hey! Quick. Does anyone know how I can hide seven bags of Hobby Lobby stuff from my husband??????????)

The Bean and I got up early and headed out the door at 9:00 this morning. That is early for us now that we are on our new "at home" schedule. We get up early, but leaving the house early just doesn't appeal to us. I had heard a rumor that Target might be going to 90% off this morning, so I wanted to get there early. Once we did got there, it was still 75% off. Isn't it sad that I am disappointed when it is "only 75% off"? I have really gotten cheap and tight in my older/wiser age. I picked up a few things that I can use year round including two big wooden stars with rusty star inserts. They are actually tree toppers, but I am going to let DH loose with a pair of wire cutters and see if he can get that foolish corkscrew contracption off them. I want to put them in the panes of the old window I hung above the couch to hold our Christmas Cards. The cards are gone (well, okay, they are not gone as 99% of my Christmas stuff, sans the tree, is still up all over the house), but I do want to leave the window up there from now on. So, I want to rusty-junk it up.

Since Target was sort of a disappointment, I asked, er, begged The Bean to let me have a spin around Hobby Lobby. He is a good sport and doesn't do the typical teenage boy stuff like roll his eyes, wear his I-Pod or walk ten paces behind me. In fact, he is quite the opposite. He likes to look and shop and drag crap home as much as I do. His poor, poor wife. I knew that Hobby Lobby was only ("only"!) 66% off so I really just wanted to look around and see what they had. When we got there, the sign on the door said, "80% off all Christmas." "Get a cart!", I said as I darted through the door. They had plenty of super cute fun things, but I did really good. I only succomed to four tchotckes and a tabletop feather tree. I bought a lot of fun trims, edgings, pompoms, ribbons, garland letters, scrapbooking things, glitter, beads and lots of other craty things that I should be able to use in my crafty eneavors and turn into more money next year. 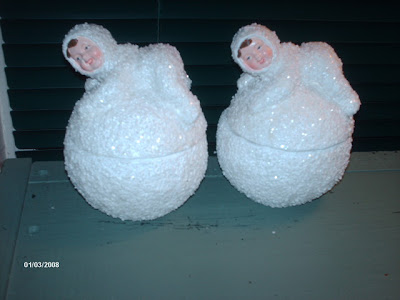 Here are two of the things I had to grab. The snowballs are boxes. Too cute and glittery! My rational was to buy them as possible gifts next year. Yea, right. The Bean and I shone with glitter on our faces the rest of the day.

It turned out to be seven big Hobby Lobby bags full of stuff in the end. But, I spent the evening taking the robbon off the spool, opening all the packages and condensing it into one of my vintage picnic baskets so it is hidden. Yea, for me!

We ate lunch at Chick-fil-A. We had bought two $20.00 gift cards in order to get the free calendars before Christmas. So, today we used two coupons for free sandwiches and used the gift card to pay $4.66 for waffle fries and one drink. Not a bad deal.

Next it was on to Wal-Mart for groceries. No deals there! $125.00 later we left. It was only about 32 degreees at that point, so I didn't mind leaving the groceries in the car while we did a quick thrift run. I deserved it at that point!

At the thrift, I donated our old winter coats, then had a look around. There was a box of little junky toys and stuffed animals and I started digging in it. I always find a goodie in the toy box. And, I did! I found a little miniature Steiff Leo the Lion. That's two Steiff in less than six months after never having see one EVER. It was a quarter and made the entire trip worthwhile. In fact, I can't think of anything else I bought except a vintage Rock 'Em Sock' Em Robot Game that the Bean found. Oh yes! I bought a lampshade which was the reason I went to the thrift in the first place. I priced them at Target, and decided to check the thrift first. Found the exact size and style I needed for 50¢. So, the lampshade I needed for 50¢ and a Steiff thrown in for 25¢. Not a bad thrift trip, I suppose.

What after Christmas Clearance Goodies have you found this year?
Posted by Shara at 9:15 PM