Friday after The Bean and I fit some halfway educational things into our day, we, of course, hit the thrifts. This was a town 20 miles away, so these were new thrifts for me. One was the Battered Woman's Thrift and it was a pretty good one. Very low prices and a bulletin board by the door with lots of Specials on it - 1/2 Price Jeans, Shirts, Jewelry, Vases and Record Albums that day. I'd hit it frequently if it were closer.
And now, on to the thrifting... 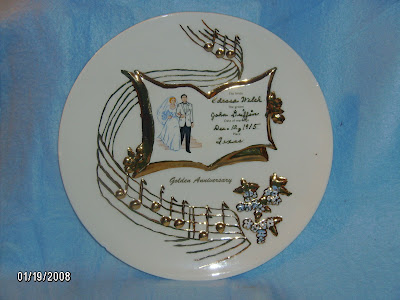 This is a hand painted 50th Wedding Anniversary Plate. I normally would have shyed away from something like this - but check out the wedding date - 1915! So, the plate is from 1965, which is an antique in itself (Hey! Wait a minute! I was born in 1966!)not to mention they were married in 1915. I thought it might sell, not sure though. It was only 75¢. 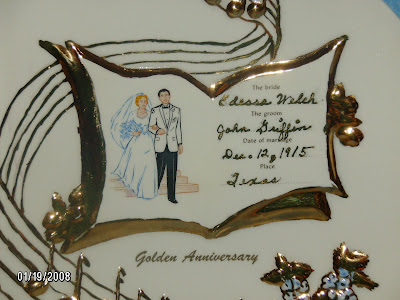 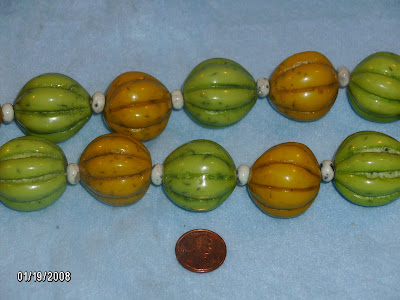 And this fabulous glass bead necklace was $1.00. The beads are huge, as you can see from the penny in front. Not sure what I'll do with it, but it is pretty cool. It has a little gold tag with a name on it, but I can't quite make it out. Those darn 1966 eyeballs of mine. 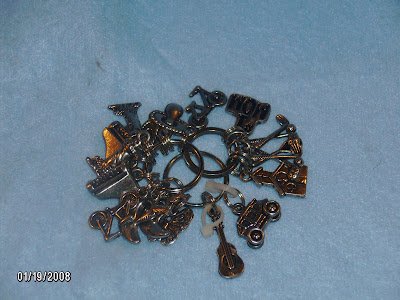 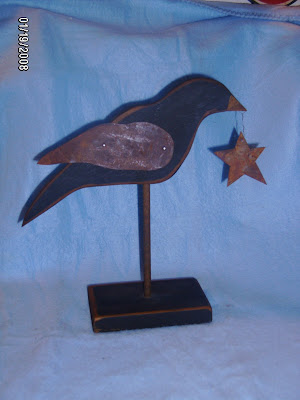 This crow was $2.00. Love the rusty star in his mouth. I have quite a bit of crows as that is The Bean's Cherokee name (Crow Walker) and I am on a bit or a star kick right now, plus who doesn't love rust? 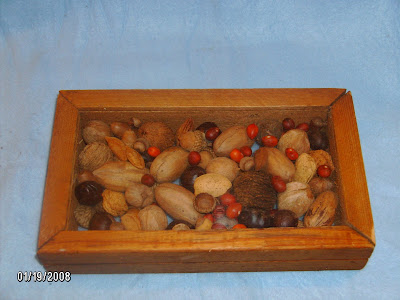 I must be nuts for buying this. Ha ha. This handmade wooden box has glass on both sides and houses nuts of all sorts inside preserved for prosperity. I have no idea why anyone took the time to do this or really why I even bought it, but I did. It was 75¢ and now that I have it home, I really love it. It's just quirky. When I saw it, I put it back, but decided to get it since it was so cheap. I wonder if it was from someone's childhood home from all the trees or something - acorns, pecans, walnuts, almonds. Well, I guess I just answered my own question - I don't think I've ever seen an almond tree. Oh well, it's fun Folk Art. 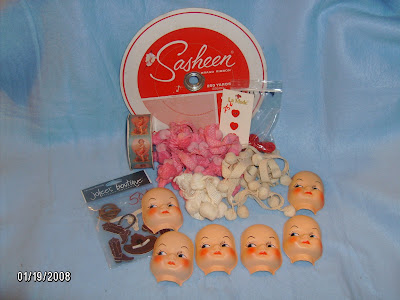 I got excited when I found an entire aisle of craft items. None of the thrifts that I frequent really have a craft area. I love the pompom fringe - I've already used the white in my Sweet Goodness Hanging Heart Swap Project. The card of buttons, bag of red buttons (the price read "29 red buttons - 25¢"), all six doll faces and the pompom fringe were all 25¢ each. They had six packages of the doll faces, but I only bought one package. Of course, now that I'm home, I'm wishing I had bought them all as I now have an idea for them. Doh! The cowboy scrapbooking stickers were 50¢ and the roll of cupid ribbon was 25¢. The giant roll of Sasheen ribbon was 75¢. I recently learned that vintage Sasheen ribbon is all the rage. What luck to have found a roll. 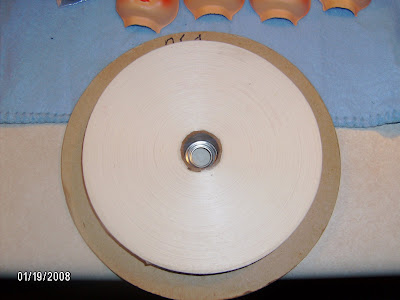 Today, on the not so thrifty front, we bought a new couch. New, new. Like from a retail store new. Of course, it was on sale and today they were paying the Sales Tax, but still - NEW! I never would have found a used one that I liked anyway, but there is just something about a used couch. Eeew. A girl's gotta have her limits. We'll be picking it up Wednesday, so I'll post a photo then. It's pretty blah - taupe and plain, but that's what we wanted. Man, the furniture today is so fanceee and big! We had a terrible time finding a plain old couch. I didn't want a lot of fancy material or 100 pillows on it. Just a couch. One that would fit into my old junky rusty chippy yard sale decor. You know what I mean, right?
Posted by Shara at 9:08 PM