Sunday morning I was trolling my boards seeing what people were finding at Target. "Hidden deals" we call them. Things that are ringing up at Clearance prices, but a) are not priced and/or b) or do not look like items that should be clearanced. I had sworn that I wouldn't return for more! But, I casually mentined to DH and The Bean that there were deals and they said in unision, "Let's go!" So, off we went with my list in hand. We struck out on a few items, but hit paydirt with others.

The Christmas scrapbooking items on the regular Christmas ailse were scanning at 90% off. Not all items, but many of them. I got four sets of the Jolee's stickers that look like little Santa Suits. I could never use them on a card or in scrapboking - I just love to look at them. And, at the normal prices, I would never buy them. But, they were 39¢ yesterday. 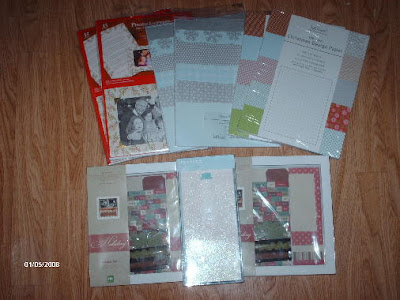 The packs of paper on the right were $9.99 each, only 99¢ yesterday - 100 sheets of patterend paper in each pack. The items at the bottom are $19.99 Shadow Box Kits. I won't use them "as is", but will make something with the shadow box and use the scrapbook-y items in other projects. They were $1.99 each. I put one int hecart and DH picked it up, looked at it and made a "huh" sound. Then he said, "That's a good deal - you should get two." I told him that he was an enabler. He should say, "Do not buy anything else!!!!" But, he was right. It was a good deal! 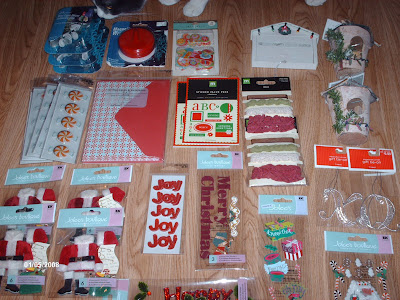 Lots and lots of scrapbooking and paper items at prices ranging from 9¢ to 59¢. Ignore the cat. I do.

I also found two glass and wooden candle boxes in the garden center. I had bought one for myself last week at $4.99 and I thought that was a good deal. But, yesterday they scanned at $1.99, so I bought the last two for gifts. I also found tow nice amyrillis in beautiful copper urns for 89¢ each. They are both beginning to grow, so it will be interesting to watch them.

Today I heard that very large $29.99 willow baskets were ringing up at $2.99 and it is taking every fiber of my being to not go and find some of those. I actually saw them in a stack last week, but didn't know they were considered "Christmasy". Eye-yi-yi.

We went to Walgreen's since we were passing by, but the manager was boxing up the Christmas items and giving dirty looks to anyone that dared cross his box strewn path. I'm used to dirty looks, so I went on in. I really only wanted a new power stake for the yard - one with a timer on it. I grabbed it and left him to his dirty look boxing.

~~~~~~~~~~~~~~~~~~~~~~~~~~
Today was back to the books around here. I am having trouble with the homeschooling thing. We are doing it and spending time with it, but I feel like he should learn something every day in every subject. He says, "We didn't even do that in real school!" So, I am trying to follow the books and fill in with my creativity. But, let's just say the crativity wasn't flowing today. We bought a book on orangutans and read that today as part of our Science lesson. Did you know that orangutans watch people and copy what they do? They have been known to watch the villagers row their canoes to land, tie them up and walk inland. So, the orangutans go down, untie the canoes and row off into the river. That is too FUNNY!

We've also decided to get a lawyer and take all this to a higher level. We were done wrong, the Bean in particular. He deserves to be heard and for someone to know what happened - from the drug interaction to the school giving him the old heave ho. His life will be forever changed due to what happened to him this year. And, mine too, for that matter. Our savings are nearly depleted and the credit card is maxed out - all due to medical bills that were completely unnecessary and not needed. So, we need someone to do what is right for The Bean.

Because of this, I haven't mentioned it lately and I most likely won't be talking about it at all in the future. Mostly because I don't want to add anything that someone might find and read. But, also because I need something to do to take my mind off everything that is happening and that has already happened. So, blogging will be free of legal and other school related talk. I will still talk about our homeschooling studies and ask my dear readers for ideas. (I'm considering a Social Studies project based on "Where my Blog Buddies Live".) Oh yes and he still gets to be a part of the unified Volleyball Team since it is an after school sport. I am very anxious to get him back involved in that and with his friends. He needs it! (Me too - I "coach"!)