The saga with the Bean continued this week. But, Dr. Mom here started her own research and Googled everything imaginable. And, I diagnosed his problem. A Chemical imbalance caused by the two medications he has been taking for his allergies and stomach ulcer. So easy, yet so difficult to figure out. I put my faith in the medical profession to treat him and I diagnosed him in the end! The doctor told me she was proud of me for paying attention to him and researching it and figuring it out. "We're only human in the medical field", she said. "We need good parents to watch their kids."

The counselor and the doctors were certain that he was being bullied or scared or something. He assured me that nothing was out of the ordinary, he just felt different. So, then I started thinking about depression and scary things and really getting scared. So, I made an appointment with a therapist. Meanwhile, last night, I start thinking about the day this all started. September 26th. He was at school and had a clogged head, runny nose red eyes and was just miserable. The teacher and the nurse said it seemed to be allergies to them. I drove him straight to Wal-Mart, paid full price for Claritin-D ("Because it's the best," I said) and made him take one in the car on the way home. And every 24 hours since that fateful day, I have given him a Claritin D to stave off any allergies or head colds. And since that day, his stomach has hurt. Tests are fine. Stomach still hurts. Nerves have started to unravel. Partly from not feeling right plus having everyone tell him his stomach doesn't hurt and that it's in his head. "It's not in my head," he said, It's in my stomach." Smart kid.

So, I Google Claritin-D side effects. *Fatigue *Nervousness *Depression * Abdominal Pain* Emotional Liability: Uh, Hell-O. That is my kid in a nutshell. Then I call the Claritin-D hotline and they confirm those are side effects and they recommend discontinuing the Claritin. (No sh*t Sherlock, I already did that). I went to see the Pharmicist and he concurred that those are very much side effects of Claritin D. Crap.

Yep, drug interaction. A Chemical Imbalance. Stop taking the Claritin D and give him a few days for his blood and head to clear and we ought to be back at Square One again. Oh, Lord. Puhleeeeeze let this be it. We cancelled the Therapist visit after the doctor concluded it must be a drug interaction. Why, Oh Why didn't someone think of this before.......

So, HOPEFULLY *knock wood* salt over my shoulder, etc. THIS IS IT.

Now, who do I bill for my diagnosis? 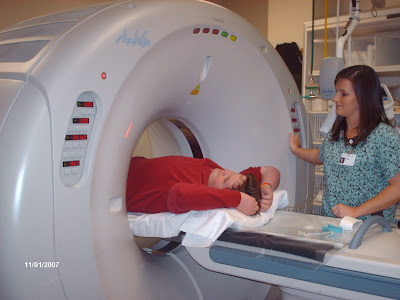 The Bean gets a CT Scan.

I'll be back in the near future to share an adventure or some junk. Or, God willing, B-O-T-H! ;o)

*Disclaimer: I don't have anything against Claritin D, it worked great on his allergies. I just wish someone would have mentioned this or figured it out a heck of a lot sooner.
Posted by Shara at 9:00 PM