Stuck at Home with a Sick Kid

I took The Bean to the doctor yesterday. I really thought it was all just drainage. But, he has an Intestinal Virus. Ick. Nothing can be done about it - it will pass. But, he is uncomfortable in the meantime. The doctor wrote him a note excusing him until Thursday, but then went on to say the might need longer. I've decided to let him ride it out through the weekend. If he went back on Friday it would be test day and he would be clueless about what the test was about. I normally get his asignments for him to do at home, but he's been too sick to try and do classwork. Next week could prove interesting. I'll have to go get an additional note from the nurse as his doctor left on a two week European vacation. Must be nice to be a doctor....

So, other than that, not much to report around here. I am behind on my emailing - I haven't forgotten you Oliveoyl. No finds to report as I haven't been anywhere in days except to the doctor. I did make a quick thrifting pitstop yesterday on the way to the doctor. I had found a purse at a high priced thrift that I rarely frequent last week and thought perhaps, just maybeeeee, they might have one, two or ten more out. I wish! The lovely Pennypincher that always comments on my blog sent me a wonderful book called "Decorating with Collections". I read a big double page spread about vintage purses, Enid Collins purses in paticular. Then last week when I stopped by the thrift, there sitting on a table was a Enid Collins Owl purse called, "Night Watch." 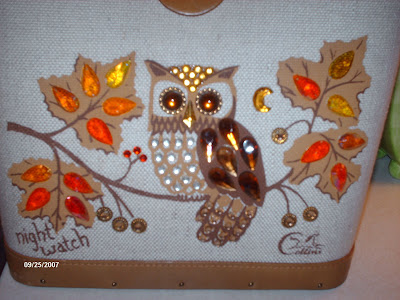 Isn't it beautiful? ha. Actually, it's pretty horendous. But, it's worth $$$ and that is pretty enough for me. I paid $2.00 for it, which is an incredibly low price for this particular thrift. I've seen Dollar Tree items priced as high as $8.00!!!!!!!

I've been super duper crafty this week since I have been housebound. I've been making lots of Halloween paper treat cones. I got crazy today and turned one upside down and made a fancy party hat out of it. I've used up a lot of the paper that I am always buying at Hobby Lobby as well as glittery anything that doesn't move. I spilled an entire canister of silver glitter on the kitchen floor and now all three humans and all three cats have glitter on them. DH will be the talk of town when he goes to work all glittery! I've been admiring all the vintage inspired glittery paper cones and collages on the internet. Not one to go buy something like that, I decided to make some. And it's easier than I suspected and FUN! 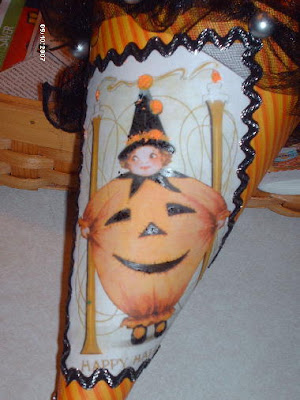 This is the very first cone I made. The ones I have made since are much better. I was just experimenting when I made this one. In fact, I have made some changes to it since theis photo. 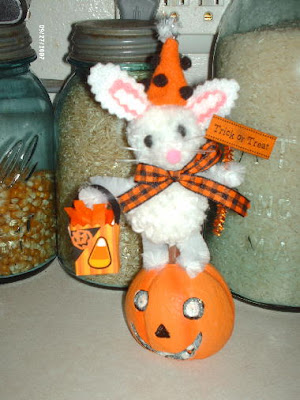 I also made this little bunny out of handmade pompoms, felt, chenile stems and other odds and ends. I saw a lady made them on Martha last easter and fell in love with them. Mine aren't nearly as professional, but I still think she is pretty cute! I've made her a cupcake liner skirt with orange and black glittered edges since I took this photo. I made another one sitting in a tiny chair. She is wearing a pink cupcke liner skirt with pink glittered trim.

Hopefully my next post will be more interesting! And less Viral! ;o)
Posted by Shara at 9:26 PM