Ahh, a normal day here. The Bean finally returned to school. Yesterday about noon, I swear, the light just returned to his eyes and he was his old happy self again. He's off the old Jell-O routine and back to food, but still watching to make sure it is rather bland or at least not spicy or garlicky or anything else tummy-ache inducing.

I took him to school this morning, then I went junking. I found some goodies, but mostly it was nice to know that the Breadman was at work, the Bean was at school and all was normal once again. Sigh with me, please. Ahhhhhh.

This will sound off the subject, but it has to do with my first purchase of the day. I have been downsizing some of my junk, getting rid of things that I used to love but no longer love or need, cullling out the less loved items or lesser qualtiy items. Since I have been home a lot, I decided to tackle my bunny collection. I have three shelves full of ceramic and stuffed bunnies, many given to me as gifts. I decided to cull a lot of them out so my most special ones could shine. I am waaay past the cutesy-wootsey dressed country bunny phase, so out they went. I decided that all the bunnies on one shelf could go with the exception of one special one that I adore. I scooped the ones I didn't want off into a big laundry basket and then whoops - there went the ONE that I wanted to keep - smashed on the floor to smithereens. I was getting rid of about 20 of them, so why oh why did I have to break the ONE I wanted?????

So, back to my first purchase. The very same before mentioned bunny that I broke just two days ago. Mine was gray and white and this one is white, but it's made by the same company and is perfect. He was sort of a splurge at $3.00, but I couldn't chance losing TWO in as many days! 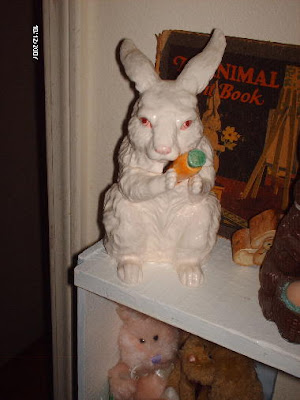 I got this cool old collapsible basket for 25¢. I thought it was for milk or something, but the lady informed me that I could put on the rack on the back of my bicycle to carry my groceries home. Well, lady, I think it has been a few years since you checked out the back of a bicycle! I will use it for magazines or some other junkily use. 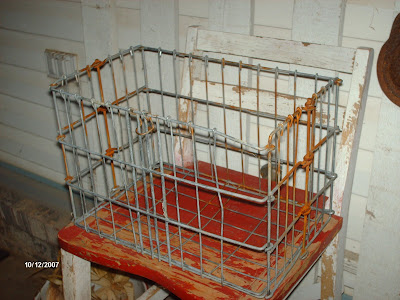 This fun wooden bowl was 50¢. It's pretty big, painted black and is a little chippy. In fact, I got it for a discount when the lady realized it was chipped. That's why I liked it! Chippy! I knew it owuld look good with Halloween Candy - and it does! 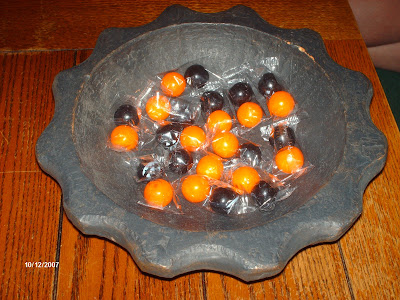 I call this a wheel, but it is really a big old pulley for a well or maybe for raisng hay into the barn. I asked the question, "How much?" and the man said make me an offer. I don't do that, so I moved on to other things. He did tell me the story of the man that used to live there that had recently told him the story behind the wheel/pulley. He said one day he was having a really bad day - no money for milk, no money for rent, etc. and he needed to let off some steam. He picked up the wheel/pulley and hurled it into the woods in disgust. The man haviing the sale had found it in the woods when he was brush hogging. His wife came out to take my money and I told her I liked the wheel/pulley. She said, $4.00" and I said. Sold.That first guy must have been one hell of a muscleman because I could only pick it up and carry it about a foot before I had to set it down. I think it weighs about 40 pounds. 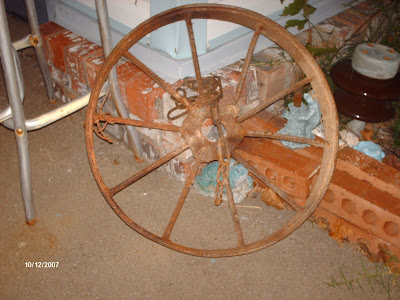 I got all five of these old pixie/gnome planters for a total of $1.00. Not a chip on them either. Two of them are Shawnee. The one in the very front has very old german glitter on the base. Ebay bound, one of these days. 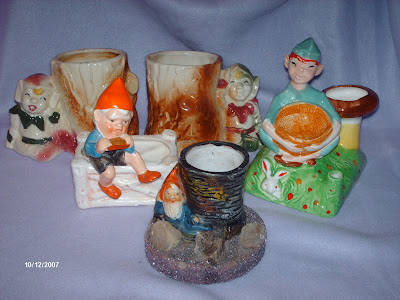 At the same sale where I got the planters, I bought several sets of old salt and pepper shakers. Actually, there was an entire Charmin tissue box full of S&P's. I dug through the box for about 30 minutes trying to mtch up sets, but I only found a few sets. I imagine they were in there, but I just couldn't match them up. I was the first one at the sale and she was still setting up, but encouraged me to dig through the boxes. So, I did. She gauranteed me and the other hard core yard saler that showed up soon after, that this would be "the cheapest garage sale you have ever been to". I thought that was funny because the two of us know our "stuff". But, she was right. She quoted me 25¢ a set on the S&P's, then ended up selling me all the ones I selected plus the five pixie planters for a total of $3.00. (It's funny, I squatted for about thrity minutes digging through those boxes and today I am sore. My first yard saling injury!) 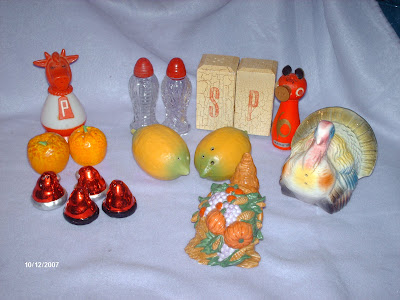 I found this entire set of spice containers in the box too. She only charged me 25¢ because it was a set. Do you think I found them all? There was a small wooden shelf in the box and now I am wondering if that was for these. Hmmm, I think I might have to stop back by and see and see if she got the darn shakers sorted yet. 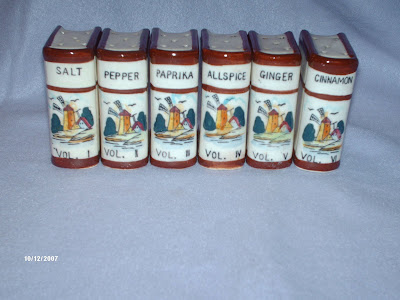 As I was leaving, I spotted a box full of old Ziggy dolls. I think they sell on ebay, so I thought I would dig through the bx and look for the older ones or any unique ones. The girl at the sale said, "Those are a nickle a piece." Then she said, "Or $1.00 for all of them." Well, why not. When I got them home the Bean and I sorted them out and found 32 Ziggy's. Those mailmen guys on the ends are about 20" tall.
Have a great weekend!They date from 1985 to 1999. 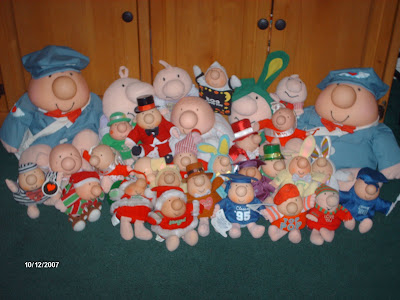