The Bean went back to school on Monday and Tuesday, but didn't look too happy when I left him. He still complained of stomach pain even though he had felt some better over the weekend. Thursday morning he was doubled over with stomach cramps. I called the Nurse's line since the Doctor is still in Europe (grrr) and found out that now the Nuse was taking off for a week too. That's it. Time for a new doctor and to get something DONE. I called the Clinic right here in town and got him in within a few hours. She determined that his stomach issues had started with a virus, but since it had been left untreated without medicine (per the other doctor's orders) that the lining of his stomach was completely gone and the acid was literally eating away at his stomach! Poor guy. She gave him Prevacid, and by that I mean, she gave us the prescription was doubly nice of her. He's had four pills now and he is a totally different kid. Happy again. Funny again. And enjoying his grocereies once again.

Friday morning he had only had two pills in him so he was feeling some better, but still having cramps. I called the school and the counselor rounded up his missing work and some tests. I dropped him off for about an hour to do that missing work then picked him up. At that point he was really starting to perk up, so of course, we went sailing. Didn't find a lot. Lots of junk at the sales I stopped at - but at least we got out and enjoyed the day and the beautiful clear skies. We have been home bound a LOT.

A cast iron match holder. I see these from time to time, but usually get quoted a high price. This one wasn't priced, so I asked. She said, "Would you give a quarter for it?" Like I am going to say, "NO! I will give you a DIME for it! 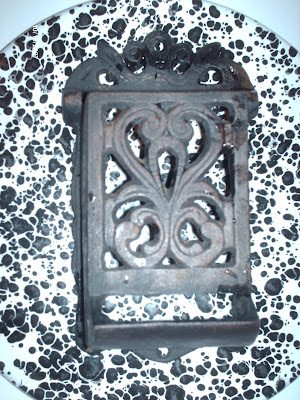 Although, she might have. At that same sale, a man inquired about an entire cardboard box stuffed full of record albums. The lady said, "What'll you give for them?" He laughed and said, "Well, I'd give you a dollar." She said, "Well, you know what, I'll take it" He was even shocked at that price!
This terra cotta bird is pretty big. I looks perfect next to my birds nest on the old $1.00 bench, don't you think? 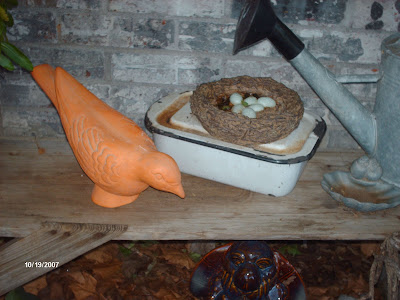 And, yes, I am clearing out some of my bunnies. But, I spotted these and they had to come home with me! These are new repro's, but I love them just the same. They will go in the Easter tub in the garage. The egg was $2.00, the bunnies in the teacups were $1.00 each. 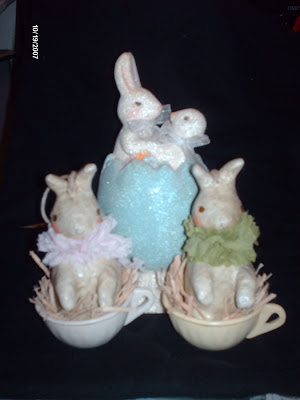 This mirror is heavy cast iron. I am not a big mirror fan, but you just gotta have a mirror in certain places. This isn't old either, but has that vintage feeling. It was only a $1.00, so the price was right for sure. 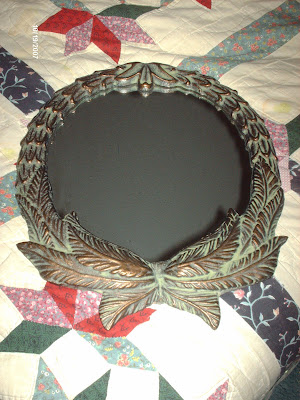 This was my only true vintage find of the day. I spotted this old tin lying on a tarp in amongst a bunch of gen-u-ine junk. I fished out a quarter for it pront-O. I knew it was an oldie and had a story to tell. The patina is all worn off on the edges so I know it was opened and closed often. I wondered what it was used for all those years. 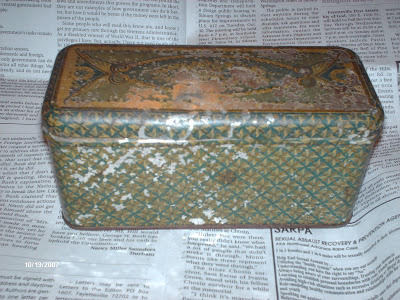 Then I got it home and opened it. There were directions on the inside of the lid. Oh! I would know the history of this old tin and what was tucked away in it all those years!

To fill the "Ladies Syringe", simply fill with water, insert into vagina
and squeeze the bulb."

That's not the story I was wanting to hear!