Thought I would post a few more pictures of my creations. Thanks for all the nice comments. Some of the graphics I "googled" and printed, but most of them came from a line of vintage-inspired scrapbooking paper from Hobby Lobby. Each piece of paper had four or five graphics on it, so one sheet went a long way. 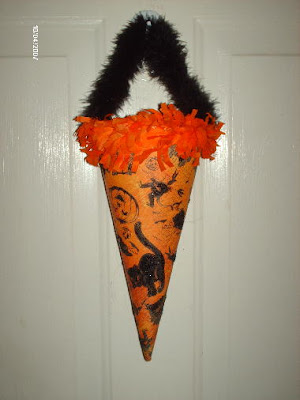 I put black glitter here and there on this one to highlight some of the graphics. That orange "festoon" (that's what it said on the wrapper) came from that $ Shop I spoke about the other day. I got a nice fat roll and it's lasting a long time, but I wish I had bought two. And I wish they had more colors. Here's the one I posted yesterday - I changed quite a bit on it now that I see the old photo. Love that festoon stuff. That black and silver ric-rac is a vintage find that I had in my stash. 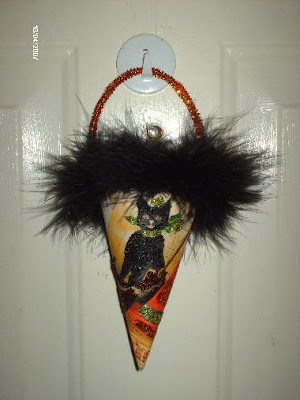 A glittery cat on a cone. That fluffy black stuff was attached to a fru-fru can cozy that I spotted at the thrift for 25¢. I cut off the fluff and wah-lah added it to the cone. It's on it's way to someone..... 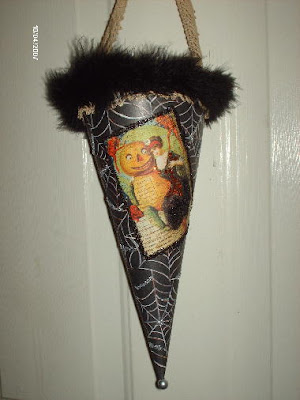 I made this one Sunday. The spiderweb paper had printed images of spiderwebs, so I added silver glitter here and there to make it "pop". I outlined the image with black glitter and topped it off with some fluffy black trim that I found at Hobby Lobby. (I loves my Hobby Lobby!). I added the silver bauble at the bottom at the last minute and liked the way this one turned out. The vintage lace was white and didn't look quite right, so I threw it in the coffee pot and let it soak in the leftover coffee. The bean thought I had lost it at that point. 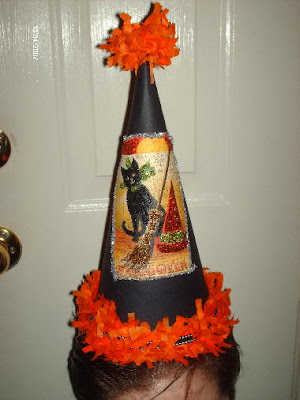 Here's the hat I decided to make. I thought it would be goofy and silly, but I love it. I may have to make the remaining cones I bought into hats. There's black ribbon with white stiching running through the festoon and along the seam in the back. And, yes, I made the Bean wear it on his head. I spared you the face. The "Geez, Mom", face.

He is feeling better and I am so glad of that. The doctor mentioned that if he wasn't better by Monday we would need to bring in an, ahem, a, uh, stool sample. That pretty much got him well TODAY. He feels pretty good until he eats, then he is down for awhile. But, he gets through it. I really think that by tomorrow night he will be back to 100%. I asked him yesterday how he felt on a scale from 1 to 10. He thought for awhile and said, "2". Aww, I thought, poor baby. Then he said, "Now, how's that scale work?" Turns out he felt more like a "9" once I explained it. Time to go back to skool and get yersef an edukashun!

There's a motorcycle rally in town this weekend - nearly 100,000 motorcycles will be present. There's a parade on Saturday of all the motorcycles. It's interesting to see motorcycles go by three across at 35 miles an hour for over an hour non-stop. There is money in those bikes! Fancy! Photos to come. There is also an "Apple Festival" in a neighboring town this weekend. And, in our tiny town, a Diabetes Walk" that will have over 1,000 people walking. A very busy weekend. And tons and tons of yard sales. We will probably hit a few in the morning and call it quits before Saturday. Too much competition on the weekend with all the traffic going this way and that way. I'm in a junk withdrawl, must find junk tomorrow.......
***I finally have a Title Bar - I so happy!!!****
Posted by Shara at 9:29 PM