I hit a few good sales this weekend. DH is still on vacation, so of course, he followed along. I try to be good when he is with me and not buy too much or spend too much. But, I found some good things that I just had to grab! You'd think that he would take one look at the house and my stash of treasures and say, "No sailing for you WOMAN." But, he doesn't - in fact, he carries my things around, loads them in the car and brings them in the house for me. In fact, he even stopped at the ATM for me when I bemoaned the fact that I only had a mere $10.00 to spend. (See, I can say good things about him.)

My favorite Friday find was this: 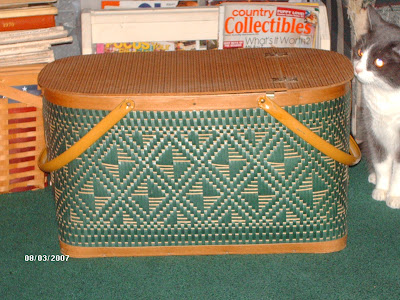 Another Redman Picnic basket - this one is pure perfection with not one teeny flaw. It has the wooden rack inside so you have a cake or casserole on the bottom and it won't get smashed. It is dated March 9, 1977 on the botom - I really thought these were older than that - I don't remember picnic baskets like that when I was a kid. I got this one late in the yardsailing day - after 1:00 PM. It was only $4.00. This seems to be the summer of picnic baskets. I now own eleven total. I will cull out some of the less than perfect ones and either sell them in my own sale or, most likely, demote them to garage storage for craft supplies and foodstuffs. Excuse the clutter and Miss Nosey Cat.

Also, over the course of two days I managed to find six pieces of Matte White Pottery for my collection. Six! 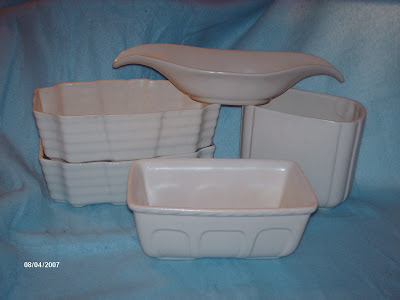 The first one came from a sale on Friday and cost $2.00 and the rest were from the same sale the next day when pieces were reduced to a $3.00 Fill A Bag Sale. So, $5.00 for six pieces of pottery. Fantabulous! It's funny, I see collections of the Matte White Pottery in magazines and they say it is expensive and hard to find. But, so far, KNOCK WOOD, I have been on quite a Matte White Potery Finding Spree. I told DH that each piece was probably worth at least $40.00 and up, but that I was keeping them. Once again, I thought he might tell me to sell them. But, he just helped me put them on my shelf.

The sale where I bought the pottery was an ebay sellers dream. First of all, it was at one of DS's teacher's houses. Her Dad sells on ebay, but he is getting older and starting to sell only smaller items. So, his stash was up for grabs. I bought a ton of pottery pieces from the 1940's - 1960's. I paid $12.00 for three big bags full of pottery - nearly 20 pieces in all - which is all destined for ebay this Fall. They had a huge selection of old light fixtures. I am kicking myself right now that I didn't just buy them all. They had them priced upwards of $20.00 each, but the man was quoting me prices of 3/$5.00 on some of them. They had salvaged them from old houses that were about to be torn down. They had clear glass, milk glass, pink glass, etc. Oh, they were gorgeous. I was hesitant to buy them in fear they would be difficult to ship and store. But, I just know I made a dreadfully bad money making decision. Oh well, live and learn.

We went to another sale at a house where they have a huge garden every year. We usually stop there once or twice a week to buy cucumbers and tomatoes in the Summer. The lady calls DS "Cucumber Boy" because he has been buying and eating cucumbers since he was teeny-tiny. She mentioned that she hadn't seen us this year - I told her we finally wised up and planted out own garden! "I hope you planted that boy some cucmbers!" she said. I got these three pieces of pottery there for 10¢ each. The white one in the back is from the first sale. These will be ebay bound as well. I discovered a crack in the pink speckeled one, so it will go out beside the pink glider. 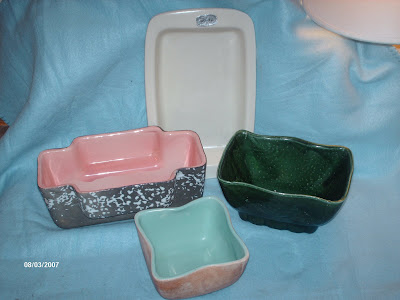 Ss was my helper and deserved something for his hard work. He found a Playstation Game for 25¢, and seven bags of these gold coins. He counted them once he got them home and there are 1,502 of them. That is only a very small portion of them in the photo. And, yes, those are Crown Royal Bags that he stores them in - he has found 19 Crown Royal bags at yard sales this summer. One sale netted him 17 of them. He keeps his Yu-Gi-Oh cards in them, his marbles, his rocks - all sorts of little collections. He has been told NOT to take them anywhere for the fear that anyone that sees them will think he lives with a bunch of alchololics! 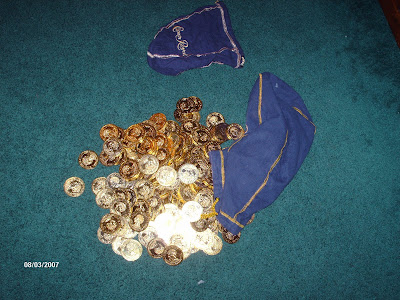 And, you might be asking yourself, "What on earth will he do with 1,502 gold coins? Well, this is one thing: 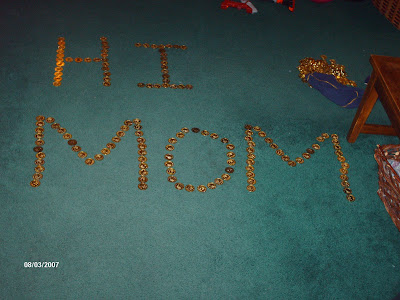 Next time I will tell about our road trips last week. And, I swear to you, there were thrift stores on every corner and I did not get to stop at one single one! Can you imagine??????
Posted by Shara at 11:03 AM