Last Thursday we loaded up along with my Mom and my Step Dad and went on a day trip. All of these locations were only about 45 minutes from home. First stop was the Mildred B. Cooper Memorial Chapel. This was built by Architect Faye Jones in memory of his Mother. It is a beautiful chapel made entirely of steel and glass. It sounds very high tech and industrial, but it is absolutely beautiful. It is extremely peaceful and quiet there.
Sign in the woods that appears to lead nowhere: 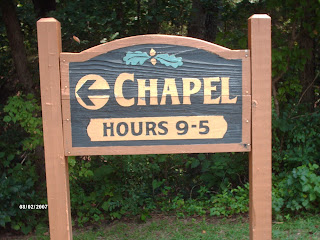 Steelwork above the front entrance: 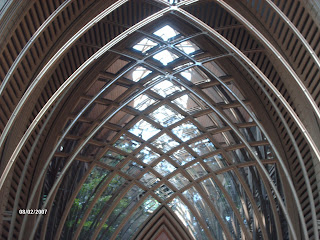 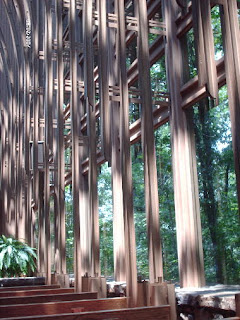 Inside looking down the aisle: 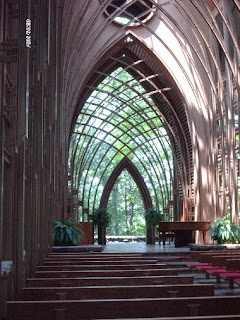 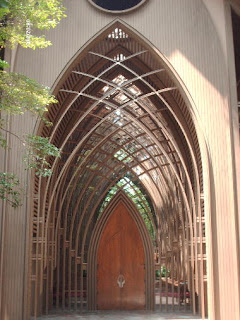 Behind the Chapel there is a small private lake with a dam that runs across the Yop. you can drive across the dam, which is one lane only, gravel ed andnot only is the lake right there to the right, but there is a very, very steep downhill plunge on the left. You can drive over it and turn around in a circle drive then come back over it. The boulders are to prevent you from plunging left or right. 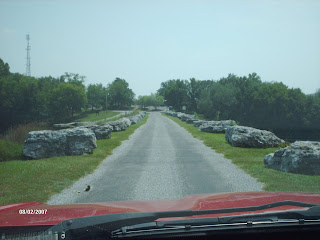 I was assured by everyone in the car that it was a beautiful sight, but as the driver, I kept my eyes straight ahead.

Next, it was on to the Veteran's Wall of Honor. This has been there for over a year and we have yet to have visited it. Which, is an outright shame, because my Step-Father's name is on it. It is beautifully executed and a wonderful tribute. However, it was honest to goodness probably 150 degrees out in that hot sun and I thought I could feel my brain boiling inside my skull. We did not stay long, but will most certainly go back when the temperatures have cooled this Fall. It is really a shame they put it right out in the sun with no shade or covered sitting areas at all since it is for the Veteran's who mostly have some sort of disability condition in the first place.
Entrance to the Wall of Honor: 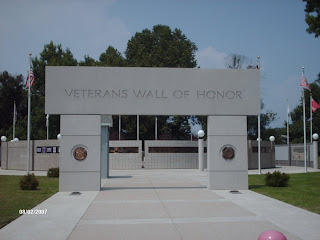 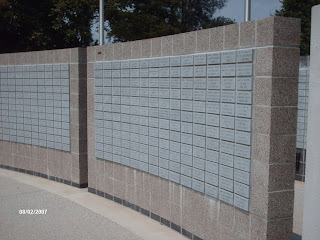 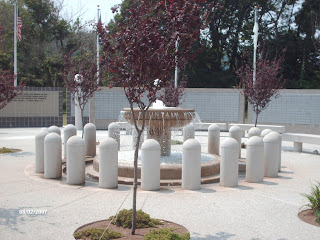 We found his name! 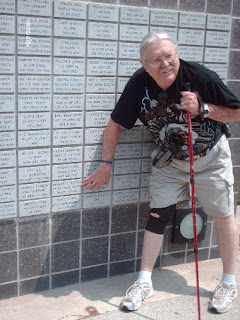 There it is - Raymond C. Clyburn (we call him Clark.) Bad knees compliments of Desert Storm. 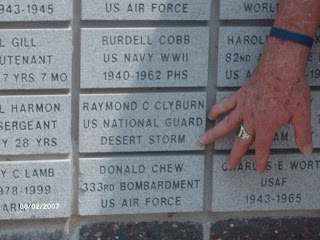 Back in the car, crank up the A/C - head to the Square to visit Walton's Five and Dime which is the Wal-Mart Visitor's Center. This was the home of Sam Walton's first little store which was in comparison to the old Walgreen's or Ben Franklin Store. Now it is a museum and has lots of intersting Wal-Mart related items in it and the history of the Walton family. Sam's first office is replicated inside as well as his office in complete form the day he died. It is interesting to see the differences. His favorite old pick up truck is in there too. There is a note above it that says "People ask me why I still drive a pickup when I could drive anything in the world. What am I supposed to do? Haul my hunting dogs around in a Rolls Royce?"
Wal-Mart Visitor's Center: 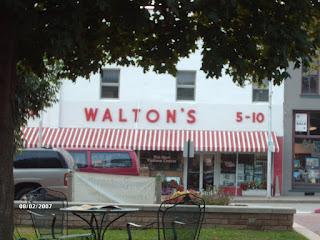 This is the Shrek that was modeled for the Wal-Mart commercials. There were so many cool things in here, but it was all behind glass and nearly impossible to photograph without glare. 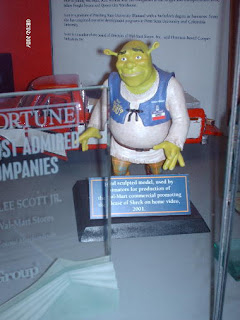 There was a fun display of items that had been returned by customers for unusual reasons. First, there was a tennis racket and someone had whomped the holy crap out of it. Reason for return? "Does not serve well." A big outside thermometer - reason for it's return? "Never kept time well" and an old metal Thermos bottle made in the early 1950's and returned in 1983 because "it leaks." It was tested and found that, indeed, it did leak! The customer is always right! 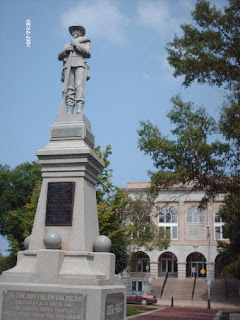 Nice cool fountain that lowered the temperature to only 130 or so. (It was such a hot day). 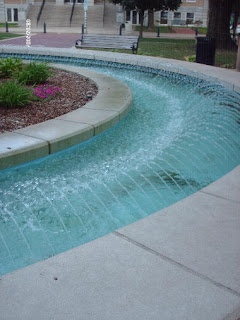 This is an old hotel that is now a Retirement Community. My Step father used to have the run of this whole place when he was a kid. His Grandmother owned a Beauty Shop which was located in one of the small storefronts on the lower level and his Grandfather was the Chef at the hotel. There was a a back entrance from the Beauty Shop into the hotel that lead to the kitchen and all the hidden coridors and he used to run amuck. It was all very "Suite Life" like Zak and Cody. 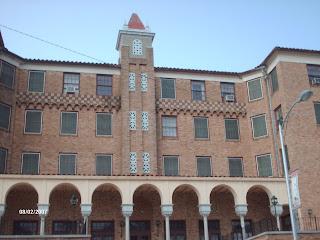 We ended the day by driving around the perimeter of Lake Atalanta and over the dam. We were driving on the vey tippy edge of a dirt road that plummeted right into the lake. As the driver, once again, I kept my eyes focused on the road and the photos taken were few and far between. It was very pretty there and we saw lots of turtles swimmiing in the water. 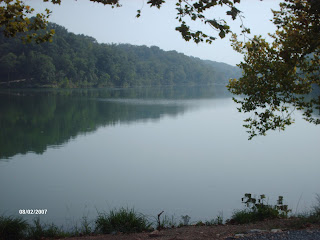 As a young boy, my Step-Father would ride his bike out to the Lake, camp put all weekend and fish for his supper ALONE. I won't even let DS go to the mailbox unattended. My, how times have changed!

School starts on August 20th, so the Day Trips are about to come to an end. We will start our Saturday Fun Days once the temperatures cool a bit. Today we are going school supply shopping. Let's just say that DS is less than pleased.
Posted by Shara at 9:36 PM