Yesterday was a hot day. I mean HOT. The heat index was 108. DS and I got "out and about" as we call it and hit three thrifts, a Rummage Sale and the Grocery Store. The first thrift was a new Habitat for Humanity Thrift that just opened last weekend. They are starting to take donations, but really didn't have much as of yet. They did have an $800.00 chandelier that stood over 6 1/2 feet tall with crystals the size of drinking glasses on it. The lady at the thrift said, "Someone that owns a castle is sure to drop by and buy it". They did have a lot of brand new building supplies - light fixtures, windows, cabinets. doors, sinks and fixtures as well as old ones of the same that came out of old torn down houses. They had an old door that had never been painted and it was all worn and wormy and tattered (you do know that is a good thing to me...). It had a set of porcelain knobs on it as well as old ornate metal plates behind the knobs. It was $10.00 and I really, really, really liked it. But, I did not buy it. I may have to go back and check on it. I have seen desks made out of old doors and this one would have been pure perfection. Well, pure worn, wormy, tattered perfection.

We went to a Rummage Sale at the A&N Augustine Foundation only because the signs on the corner touted it was an "INDOOR SALE." Well, you can't get them for false advertsing - it was indoors alright - inside a ho, humid stinky storage room with no lights or A/C. Ack. It was hot. To say the very least. They did have some box fans, but they were just blowing that hot air around. It was like sticking your head in the oven. I did, however, find several cool things and only spent $2.00. We found a really nice Scrabble game - it is mounted on a lazy susan, has the wooden tiles and all. It is dated 1978 and is brand new. (We just played a game on it. DS's Scrabble paying words are small - WON, ARM, FUEL, FART (yes, he played FART) so we have trouble getting very high scores.)

This picture is a montage of things from the Rummage Sale and one thrift store. 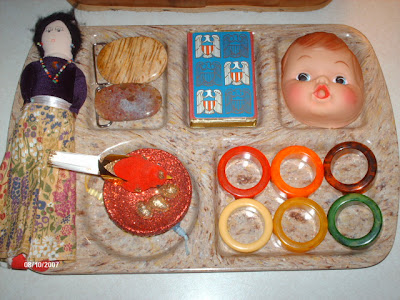 Clockwise starting on the far left. Indian Doll - 50¢
Two polished stone belt buckles - 50¢ each
Deck of old Congress Playing Cards
Old Rubber Doll (Face & Hands are under her head) - 25¢
Find of the Day - Set of Six Bakelite Napkin Rings
Vintage bird in a red glittered nest
Set of Two old speckled School Cafeteria Trays - 75¢ Pair (DS enjoys eating on these at shome as he is a brown bagger at school)

I spotted five of the napkin rings at the rummage sale and knew there should be six - scoured boxes under the table and found the sixth one. Yes! They were priced $3.00 for the set, which I knew was a steal. I grabbed an old berry picking basket - threw in the deck of cards, the vintage bird, a pink watermelon crocheted potholder (yeah, yeah, I know, I know) and the napkin rings plus the Scrabble Game. When I checked out the lady told me $2.00 for it all. So, that was a good deal. I see one single Rootbeer Napkin Ring sold for $15.00 recently. The set should bring at least $50.00. So, even though we about died from heat exhaustion, I guess it was worth it. 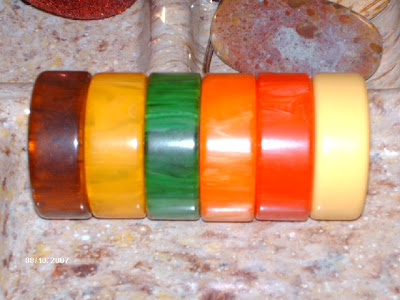 Close up of the napkin rins. I know there is a creamed corn, rootbeer and butterscotch, but I am not sure of the "proper" Bakelite names for the red, green and orange. Anyone? 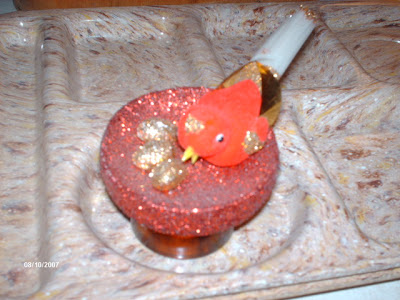 I love this little vintage bird on the red glittered nest. He has a clip on the bottom for clipping on the Christmas tree. As I was leaving, I started to ask if there were more Christmas decorations that I didn't see, because I can't imagine that someone just donated one little birdie on a nest. But, the heat was so bad that I just couldn't bear the idea of going back in there. So, I didn't ask.

This talk of heat and yard sales reminds me of a story about DS. Bare with me while I wax nostalgia - we were going to yard sales one day when he was about three years old. It was very hot, but I kept finding just one more sale and stopping. Finally it got so hot I decided to call it quits. As I was buckling him in his carseat, I said, "Are you ready to go home?" He wiped his sweaty forehead and said, "Yes! Let's go home to the P/Q!" (That would be the A/C to you and me). And he said it Peeeeee-Que! It was quite adorable, I assure you. ;o)

When I got home, I had a nice surprise package from Oliveoyl who sneakily sent me an early birthday gift. I brought it in the house and then the UPS man rang the doorbell delivering my Summer Swap Package from Evelyn. So, I had quite the fun day. DS helped me unload it all. He gets very perturbed that I have to photograph the box, arrange the packages, take another picture, open the items, arrange the items, take a picture of the items, the card, the wrappings, make a list of the goodiesetc. I told him we were going to do that at Christmas too. "You have GOT to be kidding me" he said. As we were cleaning up he asked if I got a photo of the bubble wrap. Ha ha kid.

Photos and lots of details on the Happy Mail tomorrow. Tune in!
Posted by Shara at 3:03 PM