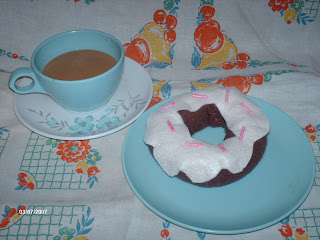 Mmmmmm...doughnuts....Don't you just LOVE chocolate cake doughnuts with vanilla icing and pink sprinkles? And don't you love them even more when they are made of felt and not even edible? I saw these felt doughnuts on several blogs and thought they were fabulous. I toyed around with a pattern and was making it way too difficult. As it turns out, it is really easy once I used my right brain and figured it out. Der. I made this one very, very quickly just to see if it was going to work out and Wah-lah - it did. I bought every flavor of felt, I mean every color of felt today along with some sprinkles, I mean beads and some icing - uh, I mean fabric paint. I'm going to make a dozen and enter them in the fair this year. 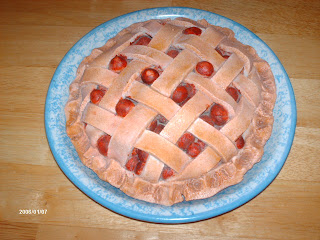 I make these inedible cherry pies and enter them in the fair too. One year I was turned away from the crafting area at the fair and told to go to the food entry division. Guess I fooled someone! 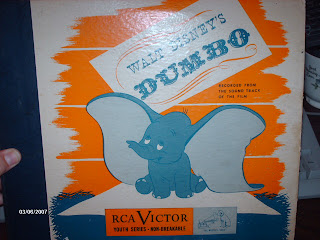 I've been thrifting here and there over the past few days. I bought this Dumbo Record Album set for $1.50. In normally shy away from records, but these are the old thick RCA Victor records and they are dated from 1947 from the original Dumbo Soundtrack. I'm hoping a Disney collector will swoop in on it. I am certainly NOT supposed to be buying any stuiffed animals and I most certainly am not supposed to be buying any bunnies as my bunny collection cup runth over. 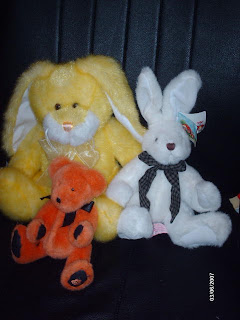 But, seriously, both of these brand new irresistable sweet bunnies were just a mere 25¢ each. The bear is a Boyds and was 25¢ at the Salvation Army. I laid it on the counter and the lady behind me picks it up and starts "Ooohing" and "Aaahhing" - "OH! That's a nice bear! The ones that move their arms are VERY VALUABLE. Oh, And he has a HUMP that makes his especially valuable. I collect bears and this is a a really, really nice specimen..." I think she thought the lady at the counter would hear her and ring up some inanely high price and I would shreik and run out of the store. Then she would swoop in and get it for HER collection - nice specimen my rear! Anyhooo, the nice SA lady said that will be...drumroll...25¢ and the lady behind me did the old, suck air through your teeth in shock move. So, narnee-narnee nar-nar lady. 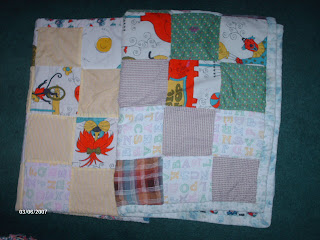 I went to my super cheap thrift on Saturday. DS and I gatered up an armload of items and went to check out. The girl announced my total was a mere $2.75. I said that certainly sounded too cheap. "Oh, the whole store is half price today." Boy, take those parcels to the car - we's gonna shop some more! So, we made another spin around and gathered up $5.00 more. This is the thrift that is so cheap in the first place, let alone HALF PRICE. I got these two handmade baby quilts for $1.50 TOTAL. The thing is at this thrift is they are putting things out all the time you are shopping. I literally have to put blinders on to get out of there. They also save all their holiday items and put them out a the right time of year. There are hundreds of bunnies there - must not look..... 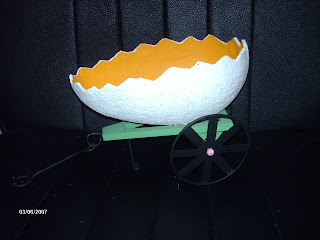 And lastly, I spotted this half an egg wagon at the thrift yesterday. (Pardon the el crappo photo). It is a Dept. 56 item and cute as all get out. It was priced $3.00 and for me, it might as well have ben priced at $30.00. I am so tight. Squeak. Squeak. And like I already said, I do not need anything holiday or bunny related. But, it was sooo cute. Okay, I'll splurge and spend THREE big old dollars JUST THIS ONCE. As I set it on the counter, I had one last monent of hesitation and guilt. Then the lady said, "Oh 50¢ otta cover it." I damn near kissed her.