As usual, I hit a few thrift stores this week.  One stop netted me only a 50¢ Starbucks mug and the other a 1970's 75¢ Parmesan cheese shaker.  Neither really worth the stop, but at lease I found a little something - both headed to the booth for $8.00 each.  I guess if I found $8.00 in the parking lot I would call that a good day.  So, it was good enough, I suppose.

Saturday, I went to the Super cheap Thrift and then I drove a bit out of the way to go to the Summer's Thrifty Flea.  It is in a tiny "town" on the edge of the AR/OK line.  It is unincorporated, so it isn't really a town but more like a spot in the road.  The population is about 900 spread out in the country. There is a wee little post office and a big old school building that the people want to restore.  It is in dilapidated condition, but still a really cool old building.  The thrift store is inside that old school building.  Half of the store is new merchandise or things they think are worth more than a few dollars and, sadly, a whole lot of recently expired groceries.  I was raised on dented cans and freshly out of date canned foods and bruised produce. But, I just don't like to buy it now.  Plus, it is super expensive, in my book.  It it was $2.00, it's $1.25 and it's months out of date.  No thank you.  Now, that I have said all that you are wondering why on earth I went all the way out there to that sort of store.  Well!  The other half of the store is housewares, holiday, clothes and on and on.  You grab an empty grocery bag and fill it up for $1.00.  On my first walk through, I am looking for things I can sell or things I collect, then I look for things I can put in the booth or we can use or I can give to people.  This time I filled up five bags full of all sorts of stuff for a total of $5.00.  *I really don't see how selling things at $1.00 a bag will ever make enough money to restore a building. 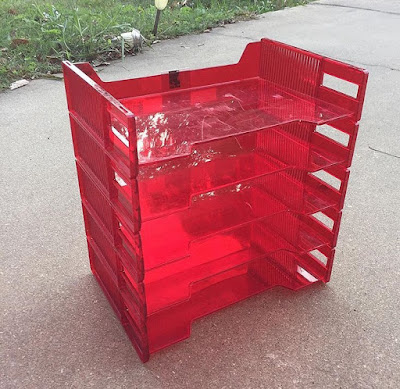 I got random Christmas things I can sell or make into other things, some old kitchen stuff and these super cool old red lucite letter trays.  I have the letter trays in my booth for $24.00, so that was worth the trip, plus all the other randomness I bought.  Sorry there aren't more photos, but not much was really photo worthy.  But, here's a photoworthy photo..... 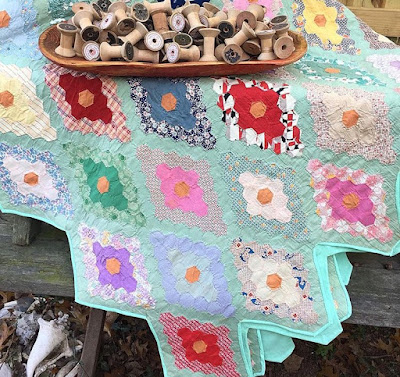 Next to the old schoolhouse there was an old rock building and there was a bunch of stuff spread out in the grass.  I almost didn't walk over there because I could tell it was all old stuff and probably higher than I wanted to pay.  Then, I came to my senses and realized I was pretty much in the middle of nowhere with little traffic, so it couldn't be that expensive.  They had some old furniture, tools and other stuff.  That fabulous quilt caught my eye right away.  It was $20.00.  Now, that's not a yard sale price for me - but it is a yard sale price for a hand stitched feedsack quilt with that fancy edging. SOLD.  I know it's worth a good deal better.  But, I am loving it so much that I have to keep it for now.  It would be great on the table at shows for my feedsack pendants or better yet - on the bed in the #somedayguestroom I am working on.  I already had the doughbowl, but I needed something for all those old spools.  There's 75 big old wooden thread spools there.  They were only $2.00.  I think I cna use them or make something or just sell them.  The labels are old and warrant a bit of research. 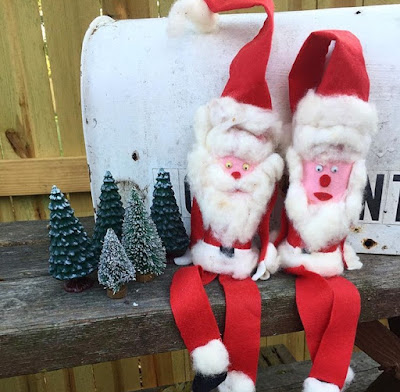 Here is a little bit of the Christmas I shoved in a bag for $1.00.  Those Santa's are TP rolls and most likely made by a kindergartner.  I think they are hilarious. I never pass up a bottle brush tree.  Even the plastic ones. 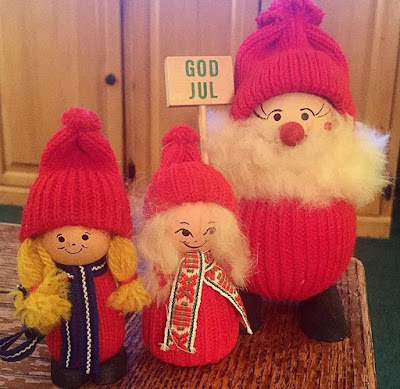 A trio of Norwegian wooden guys from the college thrift that never has good old stuff. 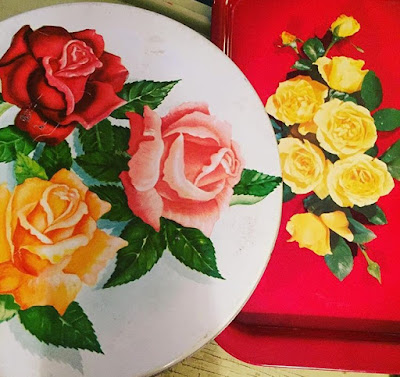 A vintage rose tin and rose tray from Goodwill.  There was a varied amount of rose themed things scattered about Goodwill that day.  Dishes, paintings, figurines, etc.  I bought the two oldest things.  I think Grandma collected roses.  :(

Now for that wishlist item.  I have my wishlist posted on the side over to the right.  That is my dream wishlist.  I also have a mental wishlist that includes a turntable (to listen to thrifted albums), a 8mm film projector (I have a ton of old movies from the 50's I thrifted) and a set of Green Boopie glasses. We had a set when I was a kid.  They sat in the lighted hutch all year long and we only used them for holiday meals.  I felt so fancy to get to use one of those beautiful green glasses!

Fast forward to a quick run into Goodwill on Tuesday where they were just rolling out the carts of new merchandise. 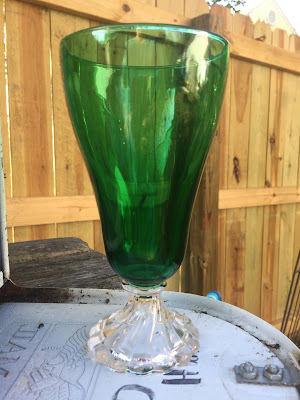 TA-DA!  I saw one, then another and and another for a total of five.  I had found one lone glass years ago, so I now have a set of 6!  And they were only $1.01 each.  A STEAL.  They are pricey on ebay and in shops.  My Christmas table is going to be FABULOUS!

When I paid, they carefully wrapped each glass in newspaper.  When I unwrapped the glasses  - look what I found! 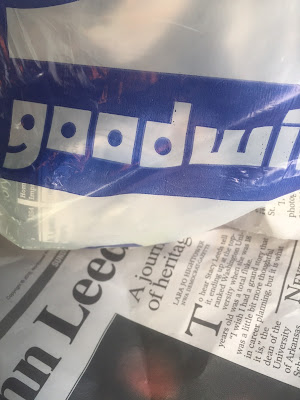 Goodwill used the newspaper with an article written by LARA!  I don't get to see her or talk to her much anymore, so this made me happy,   My thrifting buddy was there to get my beloved glasses home safe.  Thanks, Lara! <3 .="" nbsp="" p="">
The weather finally turned cool over night.  Yay!  There are a few big sales this weekend and two neighborhood sales near me.  I love cool weather and junking.  I hope your weekend has cool temps and cool junk in the forecast too!
Posted by Shara at 12:27 PM