I am working on a Junk Ranch post, but it is slow going.  I am exhausted.  Like I cannot seem to bounce back this time.  I was prepared as usual and had my layout figured out.  I only had to do a bit of tweaking because I looked at the map wrong and Lara was on the opposite side of me, so I flipped my arrangement once I got there.  But you guys.  It was hot.  Like brain melting hot.  I don't know if you all have ever experienced a hot muggy Arkansas summer, but it is like having a wet blanket on top of you in the 95 degree heat.  It is all encompassing and makes it hard to function. 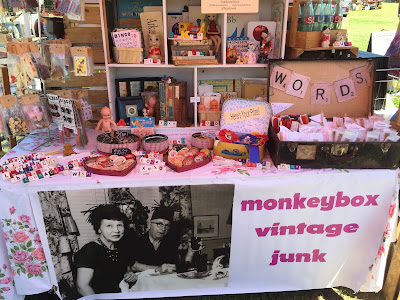 We set up most the day on Thursday, then a 13 hour day on Friday and 11 hours on Saturday which included tearing down the both at 5:00 right when the sun was really beating down on us.  I have never been so hot and miserable for such long hours.  Friday I drank almost ten bottles of water and a five pound bag of ice and I never (excuse the TMI) went to the bathroom all day.  That's a lot of sweating.  I hate summer and the heat, that's no surprise, but this was just awful.  But, no one can control the heat and it is June and it is what it is.  I already told you that I made  deal with the devil to make the rain stop.  Apparently he did stop the rain, but dude - he brought on the HEAT!  And as soon as the Junk Ranch was in the books, the skies opened on Sunday and dropped a deluge of rain. I'm so very thankful that it didn't do that during the show.  Our merchandise would have been ruined. 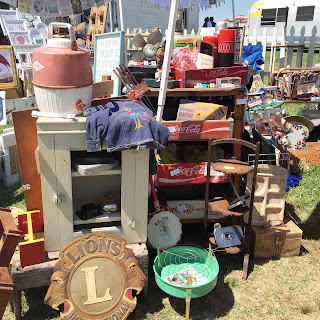 But, despite the heat, I put on my happy face,  got my booth set up and sold my little heart out.  And I did sell - quite a bit, in fact.  I took out three full loads and got it home in two loads.  One load is pretty much tables and set up stuff on it's own.  I have stories to share about certain purchases shoppers made, people I met, people that made a point to find us, what sold and what didn't sell.  But, that will have to wait awhile until I bounce back.  Because I am tired to the bone!  (For the record, Sunday was unload the car, put all the things away, do the dishes and laundry and vacuuming that had gone undone the past four days.  Today was run errands, do more laundry, sort out some of the junk ranch stuff to return to the booths and to sell at an upcoming yard sale.  So, there hasn't been much rest as of yet.)

Thanks to those of you that sent me texts, Facebook messages, Instagram comments, emails and blog comments encouraging me and looking for updates.  It really does mean the world to me that you guys do seem to want to hear all the details and that you want the best for me and this little junking endeavor of mine.  Thanks so much for your friendships!