It's All Coming Back to Me

I am remembering a few more Junk Ranch stories.  I think the fog is finally lifting from my brain! Whee! 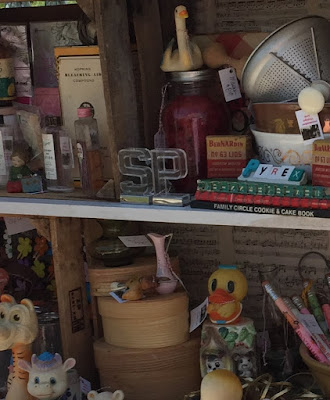 I sold those lucite S & P shakers to a newlywed couple - Samantha and Paul.
S &P.
How cute is THAT?

Also - that old jar full of red BINGO markers?  A lady came up with that and I told her that those were old BINGO markers.  "Don't care.  I'll throw those out.  I just want the jar."  It was priced $12 but I said she could have the jar for $8 and I would keep the BINGO markers.  Deal, she said. 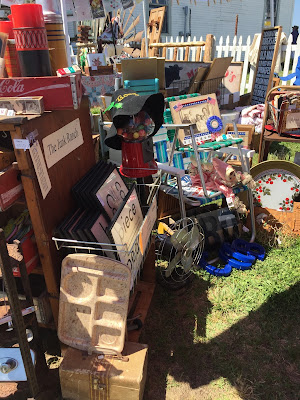 A lady bought those old confetti cafeteria trays to feed her grand kids lunch.  She keeps them some days and the girls call it "jail".  "Now they'll have the trays to make it complete", she said, 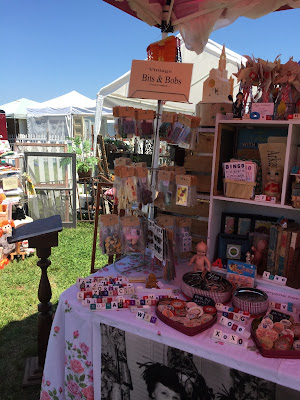 Saturday I put out about three tubs worth of new stuff and I forgot to take photos of the booth once I reworked it.  In those tubs was an old pottery monkey head bottle.  A lady bought it and said, completely out of the blue - "I am going to pour my rum in it and stick a cork in his head" and then she walked away. 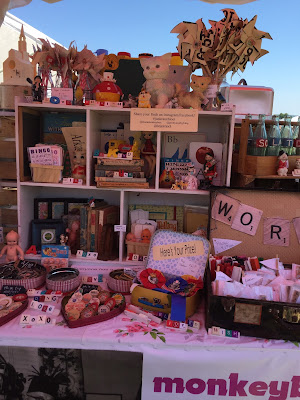 I was helping a shopper carry things to the gate and I left The Bean alone at the table.  A lady came and bought two pinwheels, three little milk bottles and a squeak toy.  She told my twenty year old son, "You sell the CUTEST stuff!"  He said, "Thanks??"  Poor guy, selling squeaky toys in a field by himself.

Those weren't the greatest stories, but at least I am thinking of some!  I think this particular junk ranch is just like Pam at House of Hawthornes said - It's like childbirth - you forget the bad part after awhile!  I have forgotten the heat and now I am in thinking mode for the October show!

Hey - be sure to read Lara's rundown of the Junk Ranch too.  Her photography is just THE BEST.

Speaking of Lara, she was nice enough to invite me to bring some junk to her house for a yard sale on Saturday.  We sure do like slinging junk together!
Posted by Shara at 11:56 PM