Thank goodness I decided to do these phone dump posts or I wouldn't have anything to blog about some weeks.  Not that my phone dump posts are all that terrific, but it's something.  I have my decorating done, but I don't want to start filling the blog up with all that quite yet.  It's pretty much the same as last year and the year before that with a few new things.  Small house plus small spaces equals not much room for changes. But, don't worry - I will have it ALL on here soon.  It's a great way for me to look back over the years and see what is the same and what I have changed up. 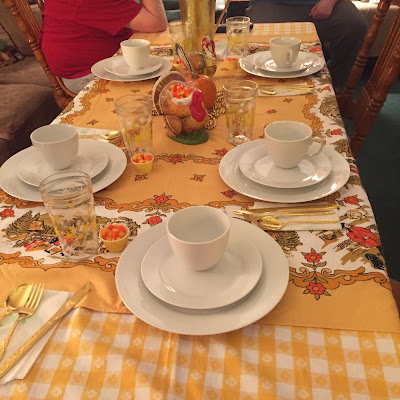 We had our family Thanksgiving dinner on the Sunday after Thanksgiving.  I set the table with what I call my Pilgrim tablecloth (it's more Dutch than anything, but the colors are right). vintage glasses, an old gold Anodized aluminum pitcher full of ice water, the family vintage gold "silver"ware and white dishes.  It looked pretty good.  We don't have a dining room, so for family dinners we clear out the coffee table and set up a table in the middle of the living room. 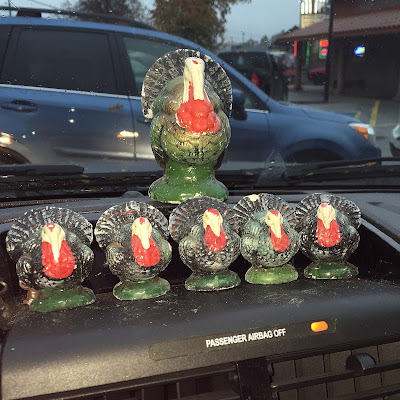 The very next day I went thrifting and found a Ziploc baggie with turkeys in it.  I thought they were Gurley candles so I grabbed them.  But, they are actually chalkware turkeys marked JAPAN.  The folks on Instagram got really excited about them.  They are nice and I am happy I found them before they got damaged in that baggie. 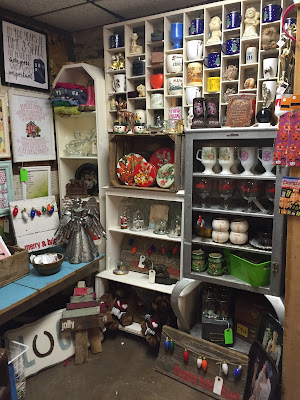 Lara and I met up last week and did a big booth overhaul.  On the other side we had a long table with that cubby sitting on top of it.  The cubby is great for holding smalls and cups and such, but we knew that other side could hold SO much more if we could find some shelves.  Lara and I both went to thrifts looking, but we couldn't find any.  I was on Craigslist looking when a Facebook notification came up that someone in my own store was selling two sets of bookshelves for $15 each.  Kismet! We hated to lose the cubby but then I had an idea that it might fit on top of our one arrangement and it did!  Perfectly!  So we will have all that space for smalls and such PLUS the wall o' shelves. 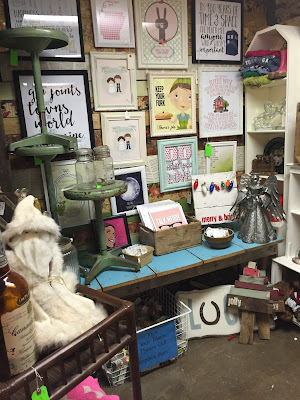 We also thought that maybe the long table would fit in front of the gallery wall and it did - like a glove.  We were on a roll!  I love all Lara's prints on that wall plus the capability of putting some on easels and using the table for more display.  That giant wire basket is great for holding bags of junk, which I am famous for - bags of junk!  Right now I have tons of older toys - Happy Meal Toys from the 80's and a bunch of cake toppers that are actually toys - Batman, Rugrats, etc.  I have a sign on there that says, "Toys Your Mom Threw Away".  They seem to be popular with the college crowd and the kiddos. 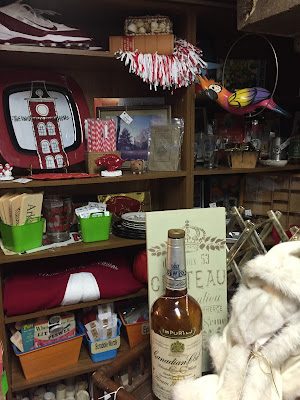 The wall of shelves.  We really jut crammed junk on there that night.  We always have a Razorback section and I put all my ephemera on the bottom two shelves since I got rid on my metal rack.  I sell some, but not enough to warrant that big rack.  Plus, that rack is so cool, I really hate leaving it anywhere  - isn't that silly? 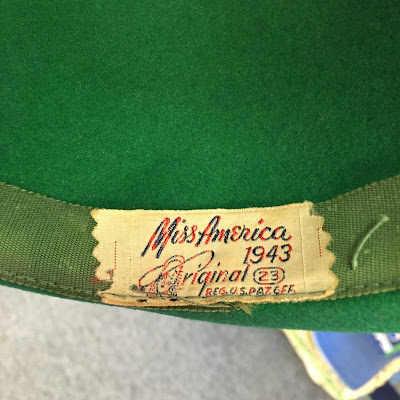 Spotted this old hat at a thrift.  It was in bad shape, but the tag was cool. 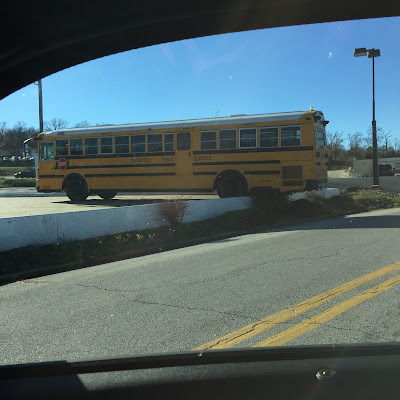 This school bus was backed in the the curb, so it stuck waaay out into the street below.  It looked dangerous and humorous all at the same time.  have I ever told you that when I worked at the school the begged me to be a bus driver?  I cannot IMAGINE me - all 5'2" of me driving a school bus!  Not to mention laying down the law with high schoolers. 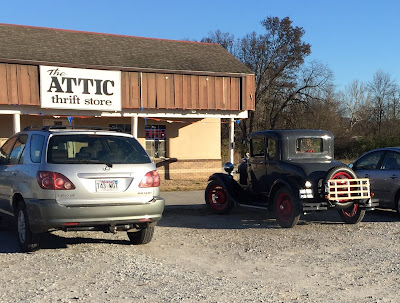 This fun old 1930 Model A had a big Christmas wreath tied to the front grill.  I sent this photo to The Bean and he asked if I had gone back in time. 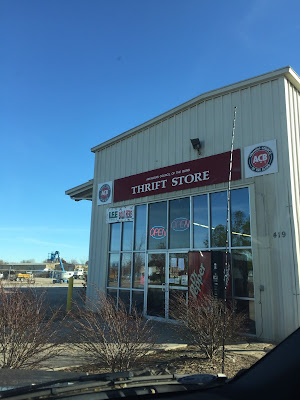 This thrift store.  Oh, this thrift store.  I have a hate/hate relationship with this thrift.  I rarely ever go and trust me, it is OFF the list now.  About a month ago I went in and they were putting an aluminum Christmas tree together.  I asked if it would be on the floor soon and they said it would be the next day.  Now, this store is crazy high on their prices  but sometimes you can find something marked crazy cheap.  That's what makes me go from time to time.  So this tree could have been $3.00 or $300.00.  It's anyone's guess.  My Dad lives near there, so her went by the next day to ask about it.  No one knew what he was talking about (there are only two employees).  He went back four days in a row and it never appeared.  I SMELL A RAT. 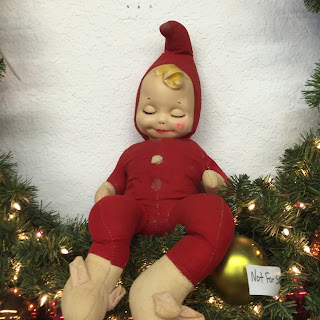 So, Saturday I was driving by and made a stop.  HUGE MISTAKE.  There was an enormous wreath on the wall with this wonderful rubber face elf/pixie sitting in it.  You can see the NOT FOR SALE sign on the wreath.  But the elf was loose, so I asked and was told with a laugh - That's NOT FOR SALE.  Why do you put things out in a thrift store and mark them not for sale?  I don't get it!  She could have been $2.00 or $200.00 knowing that store.  But not for sale, WTH?  So, two times in a month I have left here with a pit in my stomach.  I am DONE. 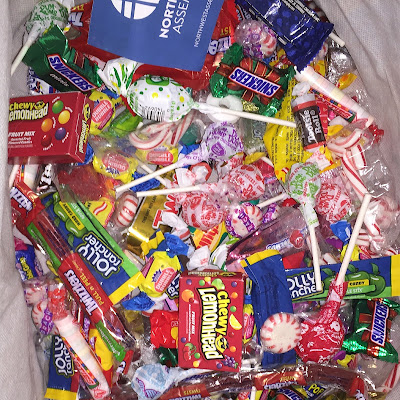 Saturday night we went to the local Christmas parade.  We were right at the beginning of the route and the people were lobbing candy at us like crazy.  I mean, we are three grown adults, we weren't expecting to get candy.  At first it was tiny candy canes that exploded when they hit the payment.  But then I noticed Snickers, Hershey Kisses and GOOD stuff that I never buy being lobbed at us.  SO, we grabbed it - 149 pieces in all.  We would have given it to the kids around us - but there weren't any! 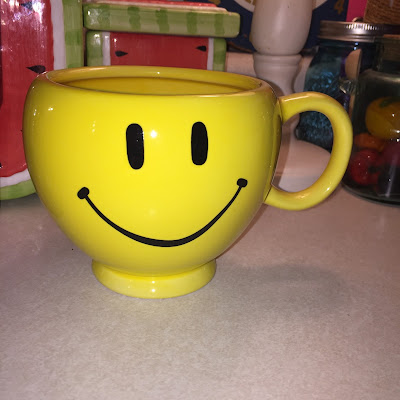 I bought this oversized Smiley face mug for the booth after seeing Chanelle buy them.  The Bean admired it and said it would be perfect for Hot Chocolate, so it's his now.  I like ti when he appreciates my thrifted finds.  (When he was little and it snowed, we would go out in the snow and play.  To get him to finally go inside again, I would bribe him with a cup of hot chocolate.  One random day, his Dad asked him if he wanted a cup of hot chocolate.  He ran to the window and said, "But, it's not snowing?"  He thought you could ONLY have hot chocolate IF it was snowing.) 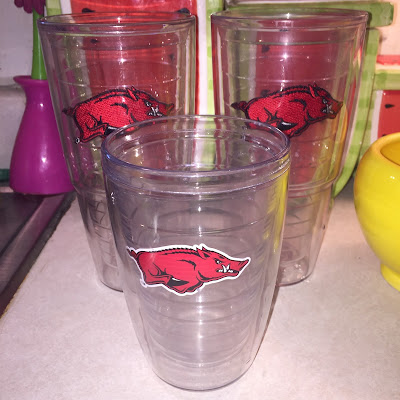 Thanks for stoppingby - I'll be back with the CHRISTMAS WONDERLAND soon.