Instagram is all abuzz lately with the "cute vs. Creepy" factor concerning Annalee dolls, Rubber faced Santa's and Kneehuggers.  I am on board with the Annalee dolls and I do love a good rubber faced Santa.  I will agree that some of those Santa's can look a bit crazy eyed.  But the ones I have are cute.  In my opinion.  I find the kneehuggers cute too.  I'm all about the cute. 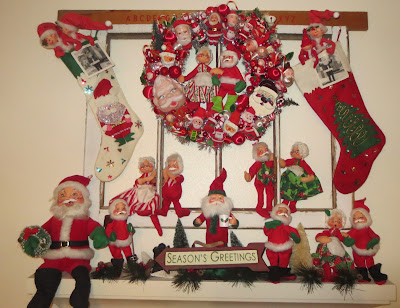 There are all sors of Annalee dolls, but I limit my collection to Santa and Mrs. Claus.  I have been gifted many of these thanks to Heidi and Chanelle.  The rest I have thrifted.  I bought the Santa in the middle of the shelf (holding a coffee cup) this year at an Open house at at Flea Market for $2.00.  I know the Santa wreath is a bit much in this area.  I had it in the booth, but someone dropped it and broke a bunch of the Santa's.  So, I brought it home and doctored it up.  I decided to keep it since most of those Santa's were from my collection anyway. 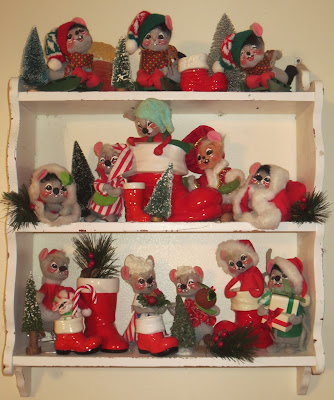 My other favorite Annalee's are Christmas mice.  Word to the wise - I despise real actual mice.  Mice that enter my house of garage are NO BEUNO.  Cute Annalee mice in funny hats are A OKAY with me.  I added in my Santa boot collection - most have names and dates on the bottom which endear them to me even more.  Why did people always put their names on things?  I don't think I have written my name on anything since my Trapper Keeper.  *You have have noticed that I add bottle brush trees to everything.  I have always liked a good bottle brush tree, but this year they are my new obsession.  The old ones with the red bases are my particular favorite. 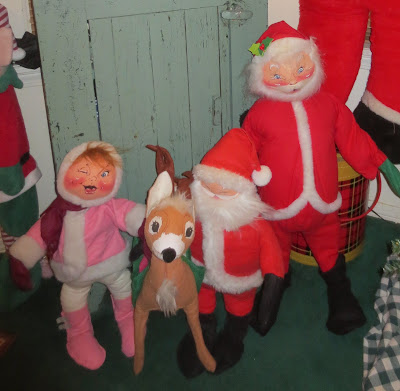 The first Annalee's I ever found.  I have told this story before - but here it comes again.  I spotted them in a thrift store sitting on a couch and I have very clear precise memories of vaulting over another couch to get to them.  I know I am not capable of vaulting over a couch, but I really, really think I did it!  That's my memory and I am sticking to it.  The big Santa came from Goodwill a few years ago.  The boys dropped me off and went to get gas.  When they came back I was standing on the curb clutching a giant Santa.  It was July, by the way.  He was in a big cardboard chimney which I thought someone had made.  It was cumbersome and not my style, so I threw it out.  I recently found out that it was made that way.  I should have kept it!  Gah! 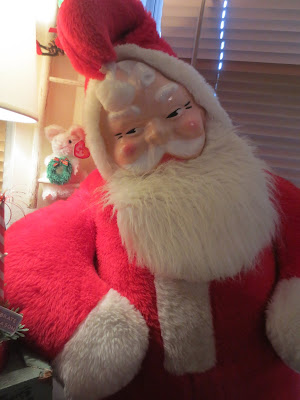 I have a couple of old rubber faced Santas, but this is my favorite.  He is huge - nearly four feet tall. He's honestly too big for me to keep and store, but I do because, well LOOK AT HIM WOULD YA? He also has the charming backstory of coming from a yard sale for $2.00.  That endears him to me even more. 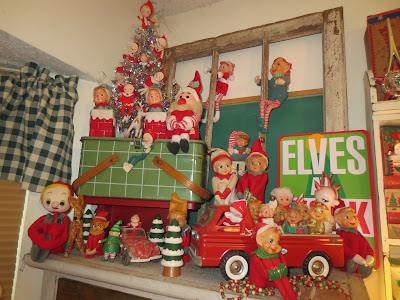 Kneehugger paradise.  I have been collecting these for a long time.  Long before that Elf on a Shelf nonsense.  (It's not nonsense - I would have fell for it hook line and sinker if he was popular when The Bean was little).  But, now everyone loves kneehuggers and they are super popular.  Therefore, they are hard to find.  I don't think I found any this year, but my girl Carol sent me a box chock full of bottle brush trees and kneehuggers for my birthday. 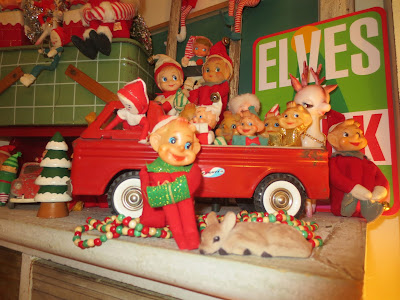 Old truck full of kneehuggers.  It's a MUST HAVE. 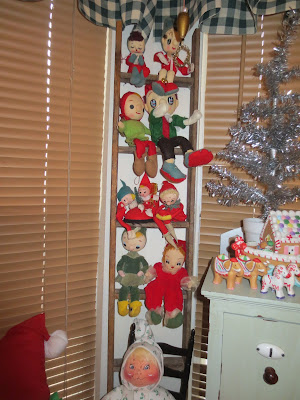 I call these kneehuggers too - but I guess they are more elves than anything.  Hey - lookie there - another Annalee doll!  ebay sent me a $10.00 gift certificate on my anniversary, so I bought that doll. Gee, I am WILD aren't I? 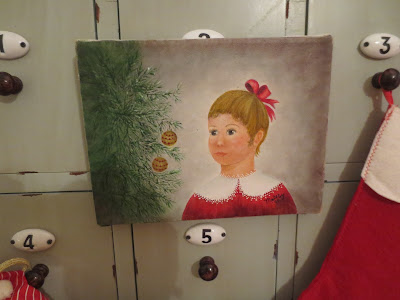 And now - a not creepy, but thrifted item:  I thrifted this little oil painting last week.  Isn't it sweet? It's dated 1980, but it looks 1880 in style to me.  She could use a few more ornaments on that tree, couldn't she?

There's always more.  Also, I went to five thrifts today and all the Christmas was 50% off.  I actually found a good amount of vintage - all destined for the Junk Ranch next October.  But, I will try to get some photos before I box it all up.

***My name really is Shara Lee.