"My friend Carol gave the writing prompt: "How about what you would do if you won the lottery? I know we all DREAM about it."  So since the Powerball is at HALF A BILLION DOLLARS, this seems like a timely post.

Son of a nutcracker!

They say money can't buy happiness, but I am pretty sure I could be pretty damned happy with a half a billion in my bank account.  *After taxes would still be a whole LOTTA cash.

So, what would I do?  I would travel within the United States.  I don't fly - I've only taken three trips by air in my adult life. I am suffer from terrible motion sickness so it is not fun for me to fly. The first trip was from Tulsa to St. Louis which is straight up and straight down.  *PUKE*  Then we got on another plane and flew non stop from St. Louis to Hawaii.  We flew and we flew and we flew for hours and THEN the pilot announced we were JUST NOW getting to the ocean.  "UH, perhaps we should stop for some FUEL????"  *MORE PUKING*  Then, we got on another plane and flew from one island to another.  And then.....we got on a freaking BUS and drove to the other side of the island.  Puke, Puke, Puke.  It was awful.  (Until I woke up in freaking PARADISE the next day...).

So, short story long as I tend to do - I would get one of those huge RV's that you see on Sunday afternoon on The Travel Channel - "EXTREME RV's."  It would be like driving down the road in a luxury suite from the Bellagio.  Except, I would have that thing vintage-d OUT.  It would be like a huge Airstream full of vintage goodness. Lots of places to sleep for all my friends.

I would travel from one coast to another - Grab The Bean, swing by for Lara, then down to Texas for Carol then up to New York for Sue then down to KC for Marci and Laura, swing up to get Heidi and Melissa, then on up to get all my Portland buddies like Amy, Laurie, Kathy and Erica.  We could hit all the junk shops and junk shows along the way and it would be MY TREAT!  Vintage goodies for everyone!!!!  Who's IN? Drop me a line and stand by the road - We'll swing by for you!

I would have to come home, so I would have  nice house.  Not a huge mansion.  Well, it would be huge, because honey, I could buy a lot of vintage goodness with half a bill'.  There is a huge pasture across the street from where I currently live and I have often talked of "when I win the lottery" I will buy that huge piece of land and build a great big house right in the middle of it.  It would have the best of everything as far as what I think is the "best".  None of those foolish gold toilets or crystal chandeliers as big as an iceberg.  I would buy all new things for the house but it would have an overall vintage feel. 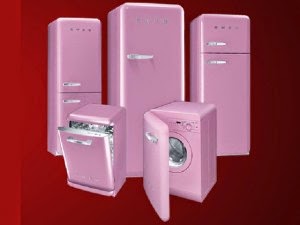 I'd have pink Smeg Appliances and awesomely vintage looking things everywhere.  Even know all I really want in life is a bright white kitchen and lots of shelves to hold my things.  I think I could swing that with my new fat bank account.  Nice big TV's in every room including the bathrooms.  An awesome sound system because I am a music lover.  Maybe I'll spring for a private concert from Justin Timberlake.  A bit of a splurge.  :)

I would have a huge pool that looked like the ocean - but only deep enough to stand up in since I can't swim and I really don't want to swim.  I just want to splash around and float.  (I mean, what else will I have to do on the days there aren't any yard sales?  Well, OF COURSE I would still go to yard sales.  You can't squash that habit that easily.)  Hey, since I am splurging, perhaps JT would like to be hired on as my POOL BOY?  I'd have the Pool Master guy design it so it looked like it had been there forever - lots of organics and boulders.  There would be an island in the center and the Treehouse Master would design a tree house to go on the island.  There will be bridges from the treehouse to the house.  (I have thought about this - trust me).  There would be a hard surface that would come out and cover part of the pool so it would be a dance floor.  I would BLAST "Uptown Funk" and I would DANCE.  Now, I do not dance as a general rule.  Because I think people are pointing and laughing at me when I do dance.  But, since I could pay people to hurt those people, dance I will.  (Picture Elaine from Seinfeld with a bit of Master P on Dancing with The Stars.)  'nough said.

I would hire someone to cook for me.  I cook everyday from scratch and I get so tired of the mess and the work.  I also think I would try more things if someone else cooked and placed it in front of me.  "Oh, that was delicious!"  What was it?"  "Truffles in a brown butter sauce with blah, de de blah, blah, blah."  "Oh, gross.  But YUM!"  Since money is no object, I would eat lots of healthy things like seafood and organic fruits and vegetables.  But, then all that healthy eating would go down the drain.  I used to dream of my own self service ice cream machine like they have down at the Chinese Restaurant (my favorite thing there), but I think I would put my house on the Blue Bell Ice Cream route and have him deliver all the ice cream.  ALL THE ICE CREAM.  Every flavor in every size.  Mmmmm.

I would still be thrifty as far as not blowing money on crazy things.  I would follow a budget and live my life much like I do right now.  I would just be FILTHY FREAKING RICH!  :D


Good luck to all of you on the Powerball drawing.  If someone other than me is going to win, then I hope it's YOU!  Just send the Blue Bell guy over my way just once, okay?
Posted by Shara at 11:23 PM