My Head is Spinning

You might remember that I was on the hunt for a revolving spinner rack from Harbor Freight.  They are all over the internet on blogs and on Instagram.  I love the good old hardware spinner racks, but I will NEVER find one in my price range, so sometimes new is okay as long as it looks vintage. 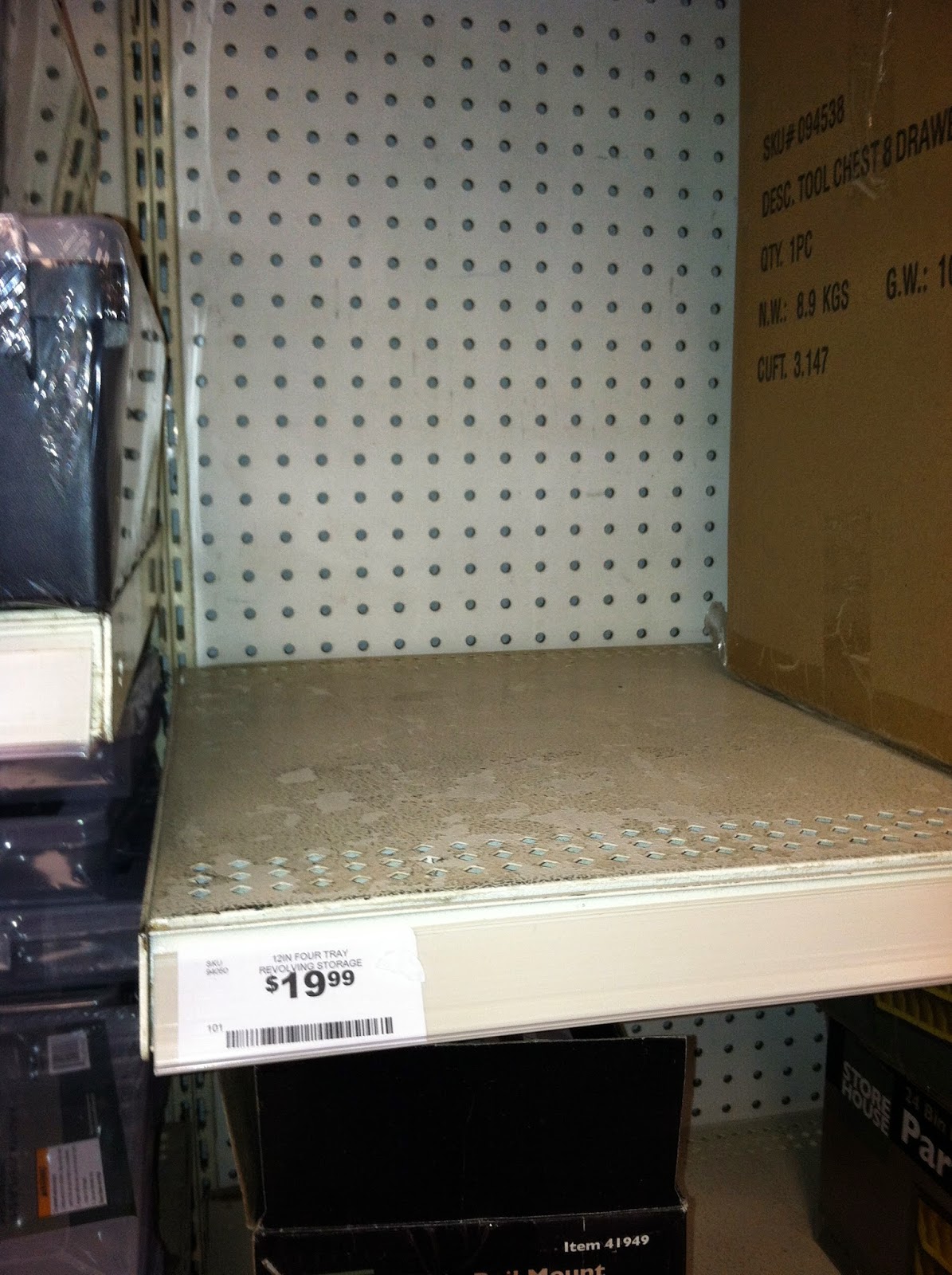 I went once and the shelf was empty.  Wah-wah-wah.

One day a couple of weeks ago, I was looking for an excuse to get out of the house, so I called and TA-DA! - they were IN STOCK!  Zoom!  Zoom!  There was one on the shelf and I clutched it to my chest so no one would attempt to wrestle it away from me.  (No one tried).  When I went to pay, the nice girl at the register, said, "Oh, were you the one that called about this?"  I said "Yes!" and that I appreciated her telling me they were in stock.  She then said the loveliest thing EVER, "I had one under the counter for you so you would be sure to get it."  I asked if I could buy them BOTH and though surely she would laugh and say, "No!  Don't be so greedy! Save one for someone else!"  But she said, "Why of course!" 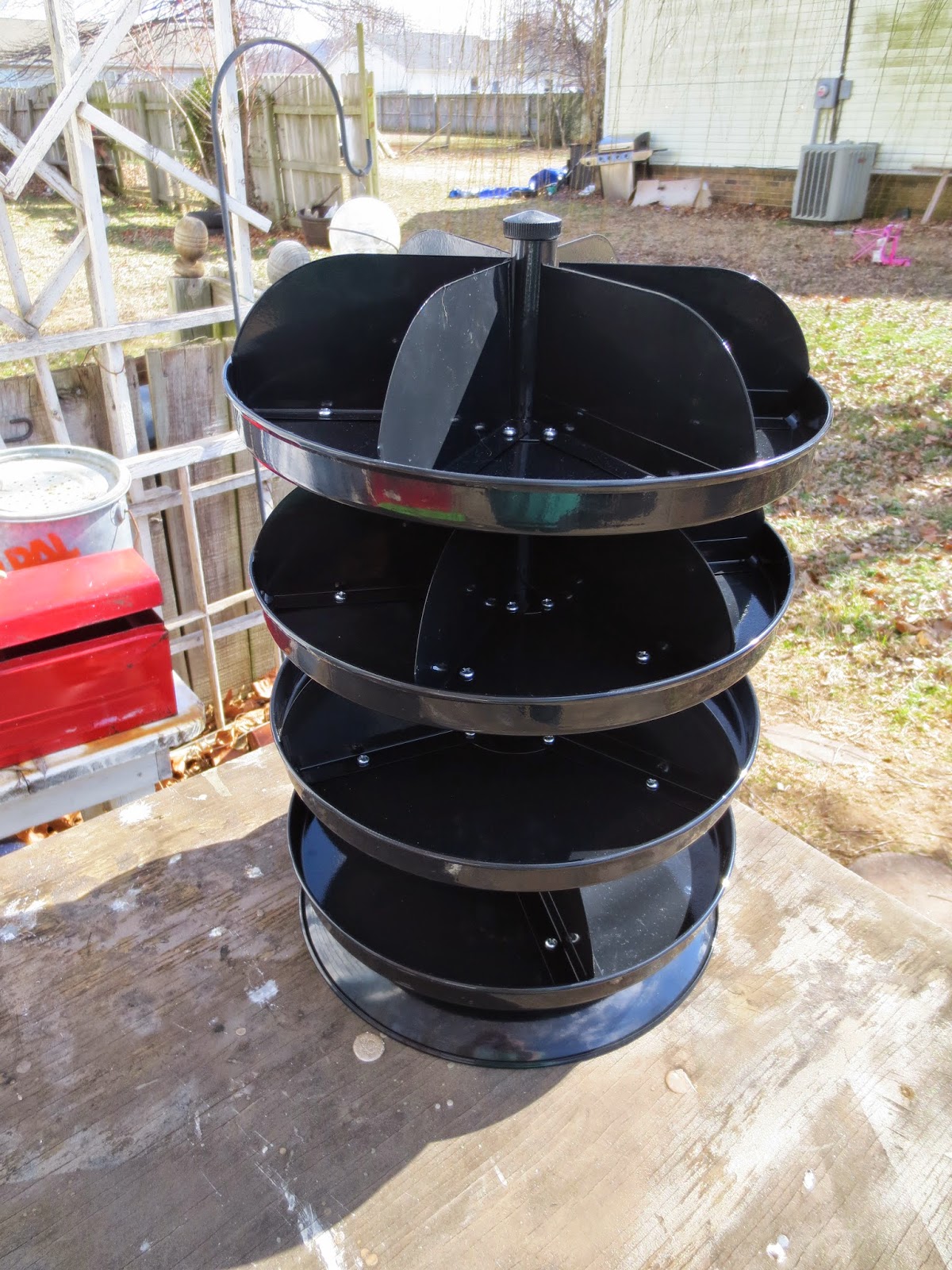 I went home and between The Bean and I we managed to put it together.  It is simple enough to do, yet it seemed daunting when I opened the box.  There are twelve dividers that make six sections on two trays and six dividers that make three sections on two trays.  (WHUT?) Each section is held in place by three screws, nuts and washers for a grand total of 117 pieces of hardware including putting together the base.  The bag of screws is about as big as a bag of pinto beans.  But, it went together easily enough.  (My neighbors are pigs - ignore the mess). 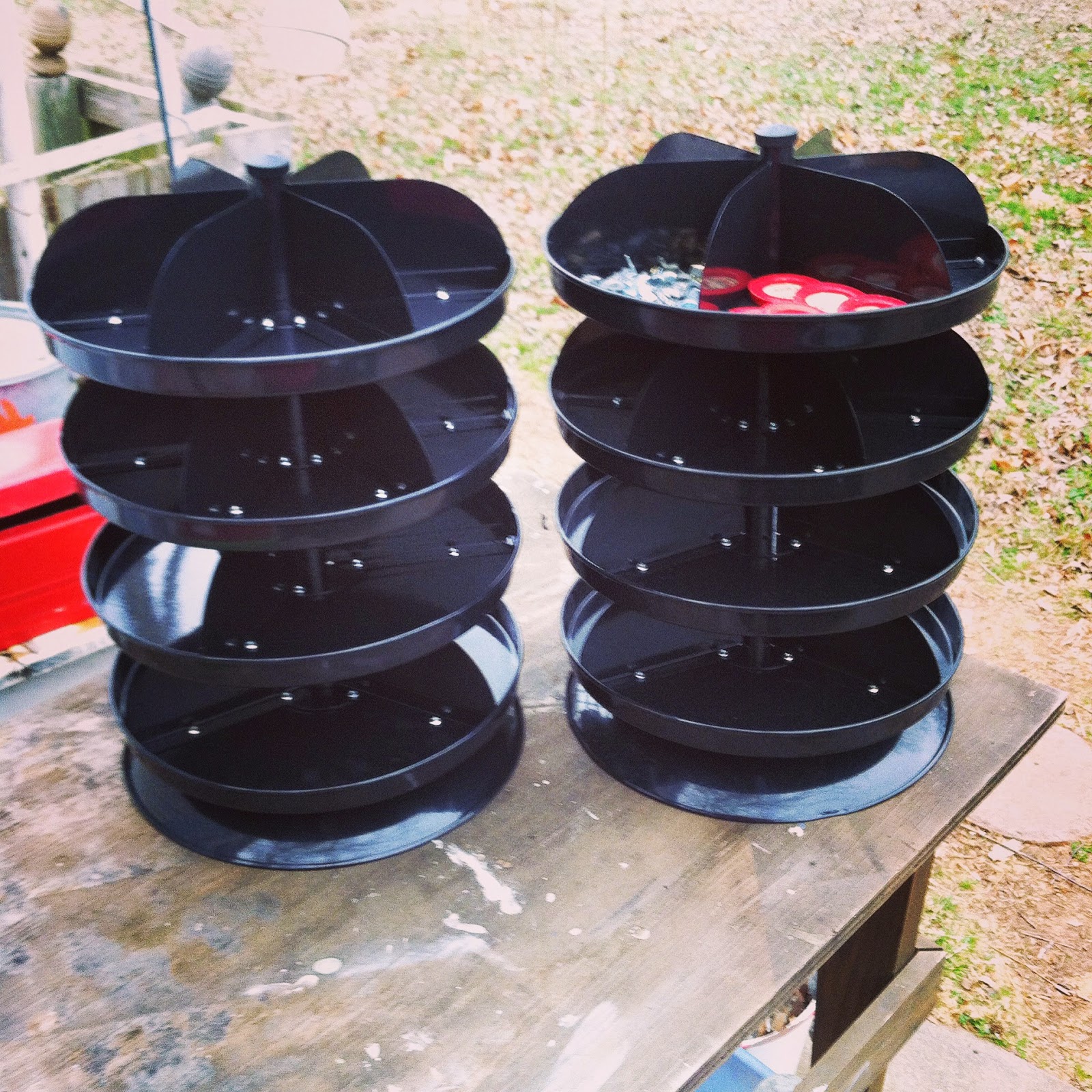 A few days later we put together the second one while we watched "Ellen".  I save a lot of projects so I can do them while I watch "Ellen" and not feel guilty for watching TV in the middle of the day. 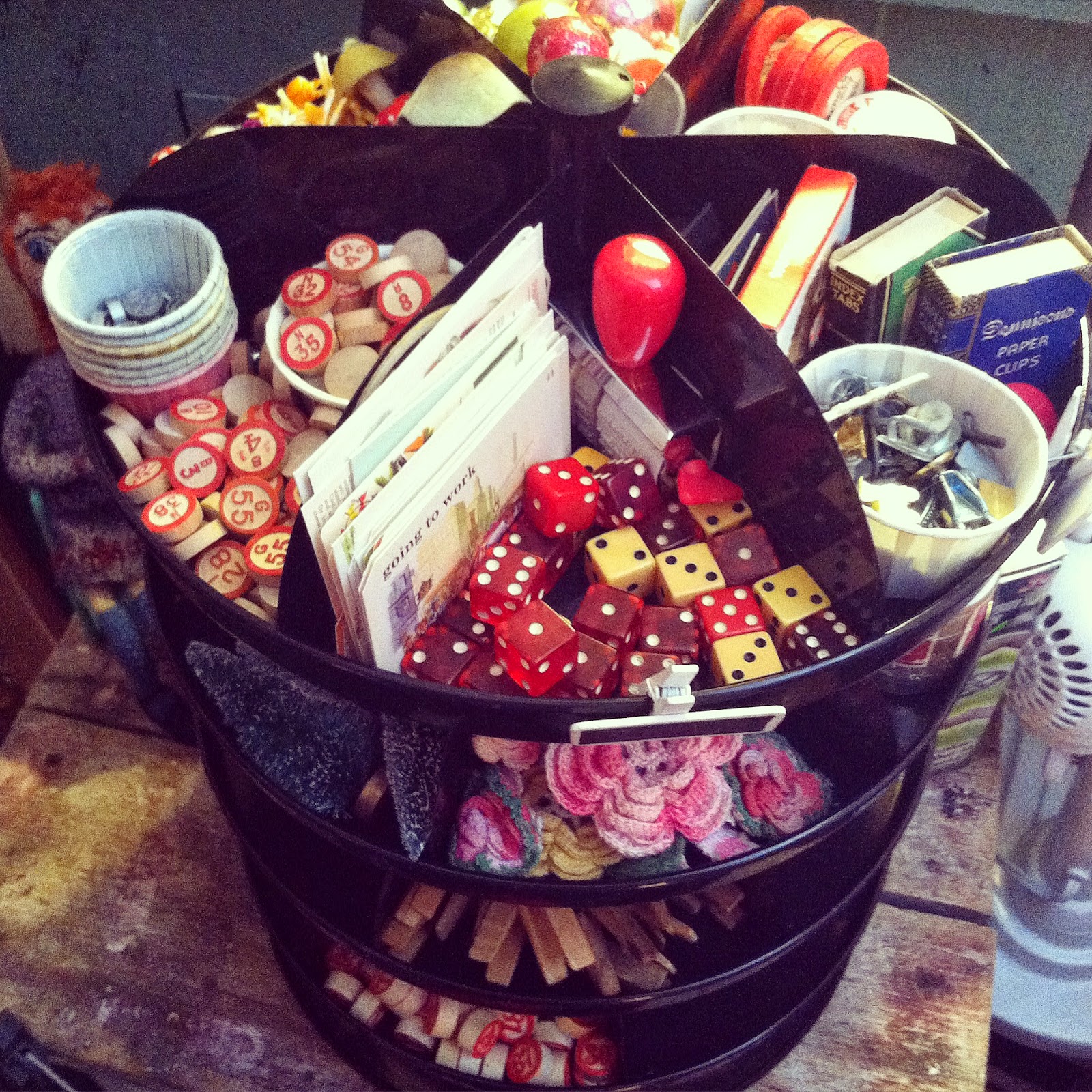 I had intended to paint them.  And, I still might.  But, once I started filing it up with my DOODADS, I just couldn't stop.  One is for ME and my craft supplies.  One is to use for old keys, chandelier crystals, pocket telescopes, flash cards, card packs, Bingo cards and all that little stuff I like to sell at shows 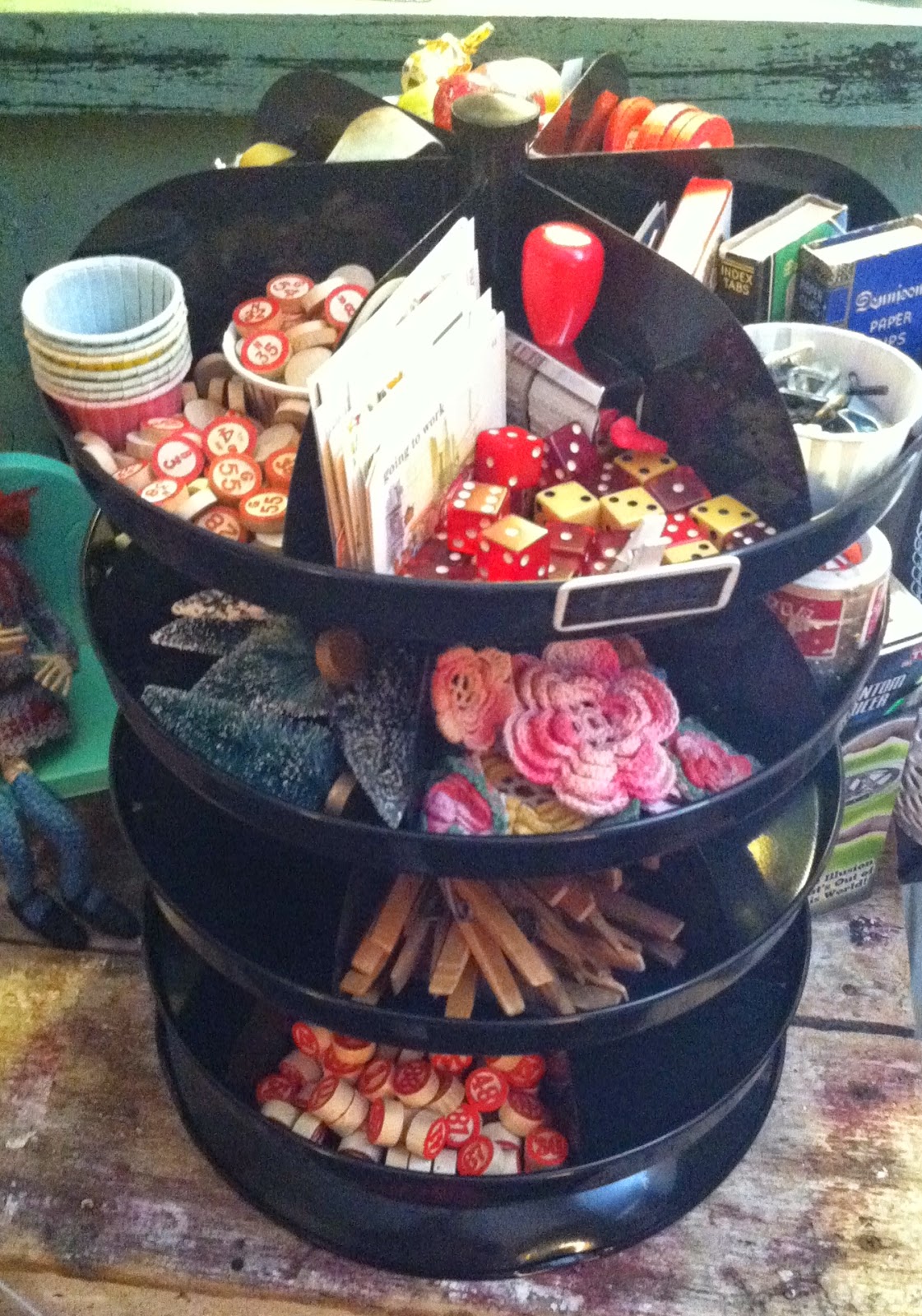 Since I have so many things that I want to put in it and most of it is tiny, I decided to re-do the racks and make mine with all the six sections shelves and the one for shows has all the three section shelves.  I think that will work best for my needs. 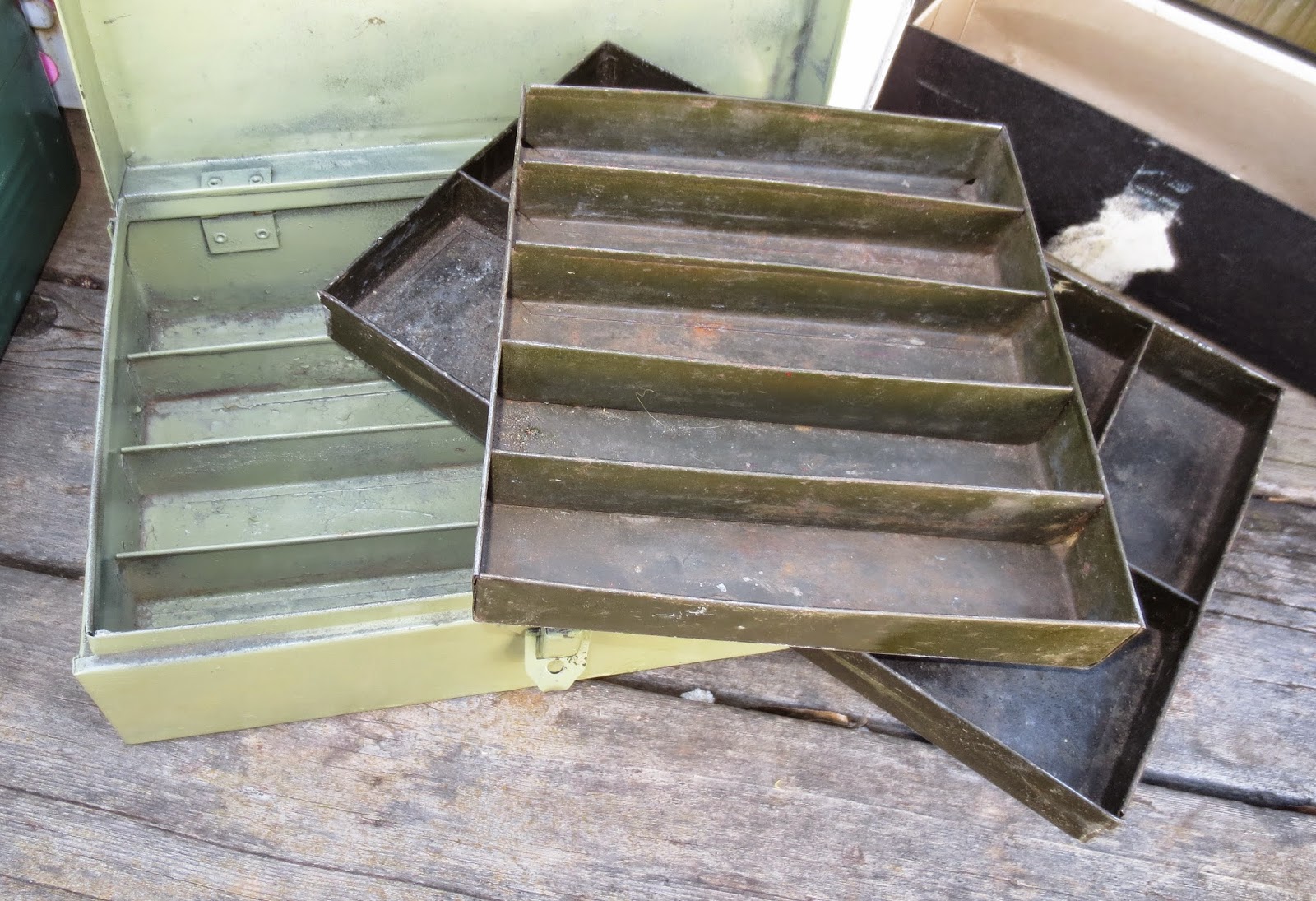 I am hoping that between this new rack and this old divided box I bought the other day, I can wrangle all my most coveted crafty things in one area and have it look good too.  At least that's the plan, Stan.

(Also, who am I kidding if I think that I will be able to leave that other rack just sitting in the garage for months at a time all empty and alone???????  I am picturing my cake topper. birthday candle collection in it already!  I could dump it out and still use it for shows.  Right?  RIGHT? BUELLER?)
Posted by Shara at 11:20 AM