The Week in Junk: Not Much, But Anything Is Good

We have been having an uneventful Winter here with some days being worthy of Capri pants and t-shirts.  But, about two weeks ago the bottom fell out and the temperatures fell and we even had a couple of snowfalls.  Wheeeee!  Yes, I love snow and I prefer cold weather.  The first snow started with sleet and ice so the roads were really bad.  That all melted off and it just stayed cold. 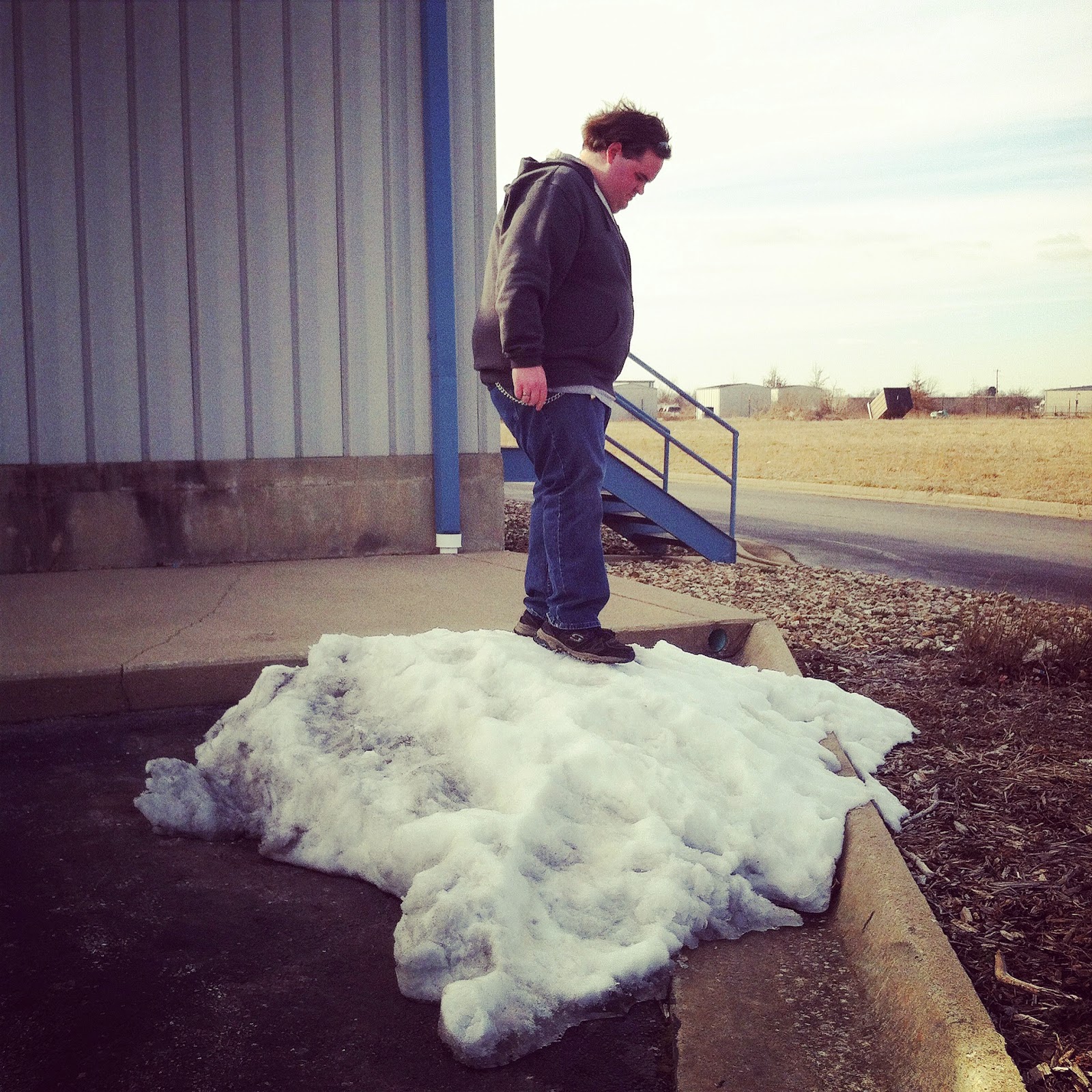 Monday, there wasn't any snow in the forecast at all.  I looked out the window about 4:00 and mentioned that there were some snowflakes falling.  Fast forward an hour later and it was white on the grass - thirty minutes later the street disappeared, the grass went under the snow and we were suddenly in a Winter Wonderland!  I posted a photo on Facebook and people five miles away were commenting "What?  What snow?"  It wasn't even falling there.  It seems that it really only happened in a small radius around my area.  It was really weird.  By noon the next day it was all gone again. But - there's more in the forecast this weekend.  Sorry Winter haters - I like it.  (Not sure I would enjoy seven month Winters like some people have or seven feet of snow like others have though...)


What?  You didn't come here for the weather report?  Sorry, Charlie.  You came here for JUNK. Well, the junk is in short demand as of late.  And the big booth is absolutely stagnant.  No sales whatsoever. I am really frustrated.  I know it's Winter and cold and blah, blah, blah, but I have NEVER had such horrible months as January and February.  The booth is fully stocked and neat - no messes because NO customers are in there messing it up.  It is really just SO frustrating.  Because nothing is selling, I don't really need to be out looking for MORE junk.  But that is what I do, so that is what I have done. 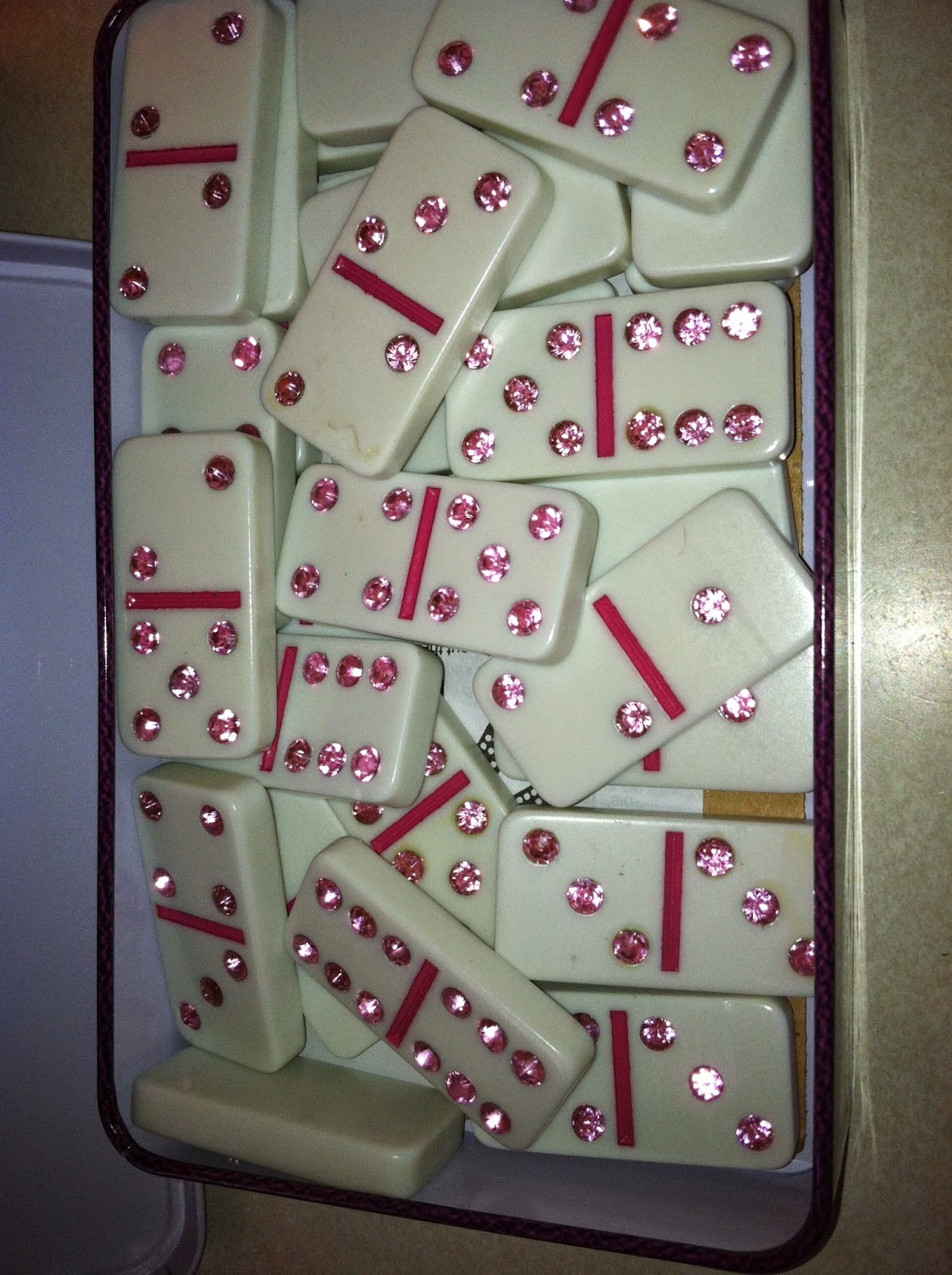 A set of pink rhinestone Dominoes.  I might turn these into necklaces.  They aren't vintage.  But, they will fit into my game piece necklaces and I think little girls (LIKE ME) would love them.  They are quite bling-y. 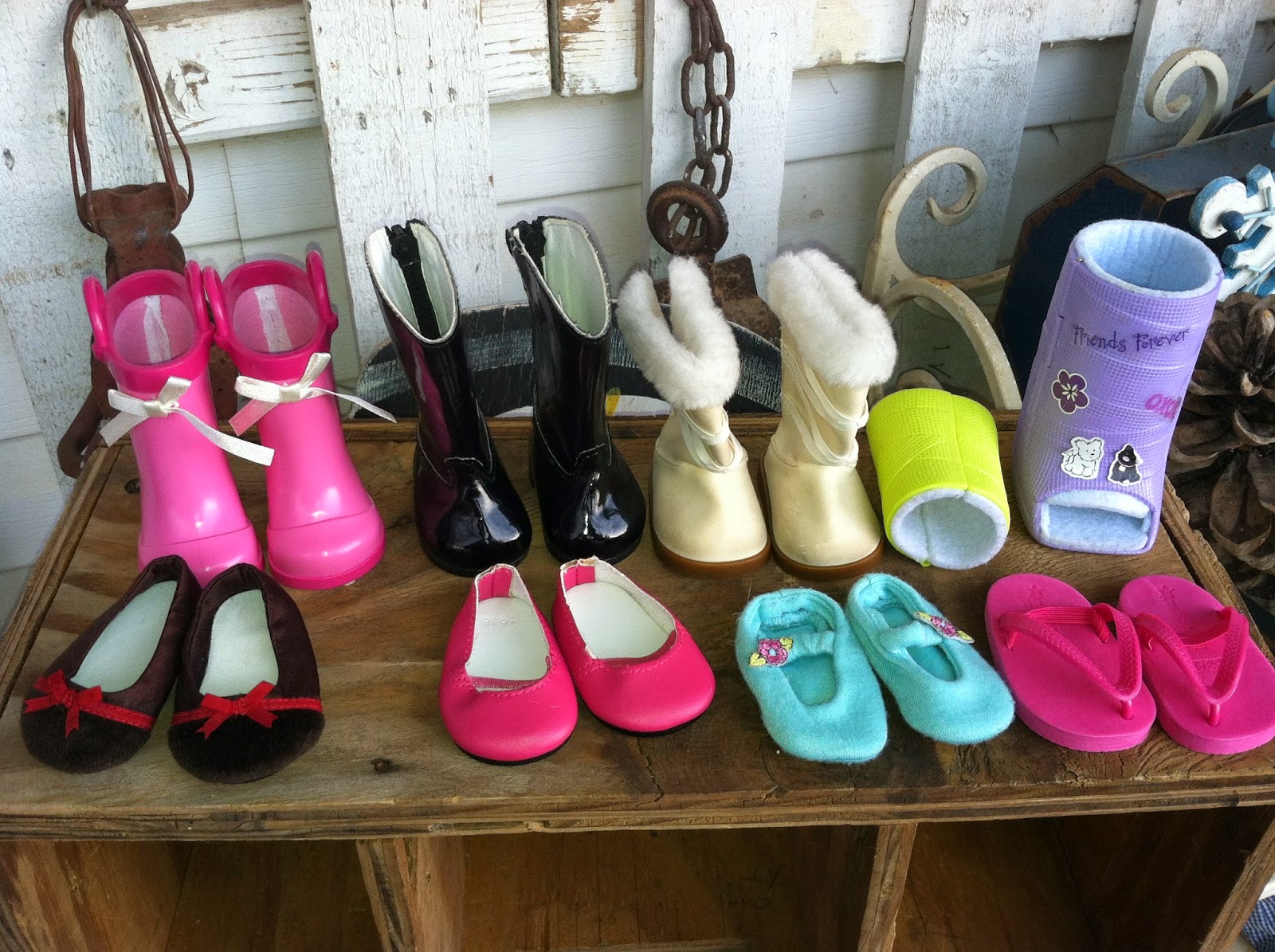 I got all of these American Girl doll shoes and an America Girl Wheelchair complete with crutches and casts at the Hospital Auxiliary store.  When we checked out, I was visiting with the lady telling her how sorry I was that her husband had recently died.  (I have known them since I was six years old.)  She was talking and I was talking and I wasn't paying attention when she said the amount I owed so I just handed over the money and left.  I was about two blocks up the street when I said, "Did I just pay TWENTY EIGHT DOLLARS for that stuff?"  The Breadman said that I had.  "Whaaaat?"  He said he thought I knew it was going to cost that much.  Uh, NO.....  When I got home I tallied up what I bought along with the AG stuff and it should have been about $15.00.  So, I overpaid $13.00.  Ouch.  But, I chalked it up to it being a Little Old Lady Thrift store and she is my friend and it is a charity store.  But still, oowie.  Luckily, the wheelchair looks like it should sell for about $30.00 on it's own.  (And, a couple of days later, I had a notification that I had won a full size Samantha American Girl Doll and book set in a sweepstakes.  So, there's more AG stuff to sell!) 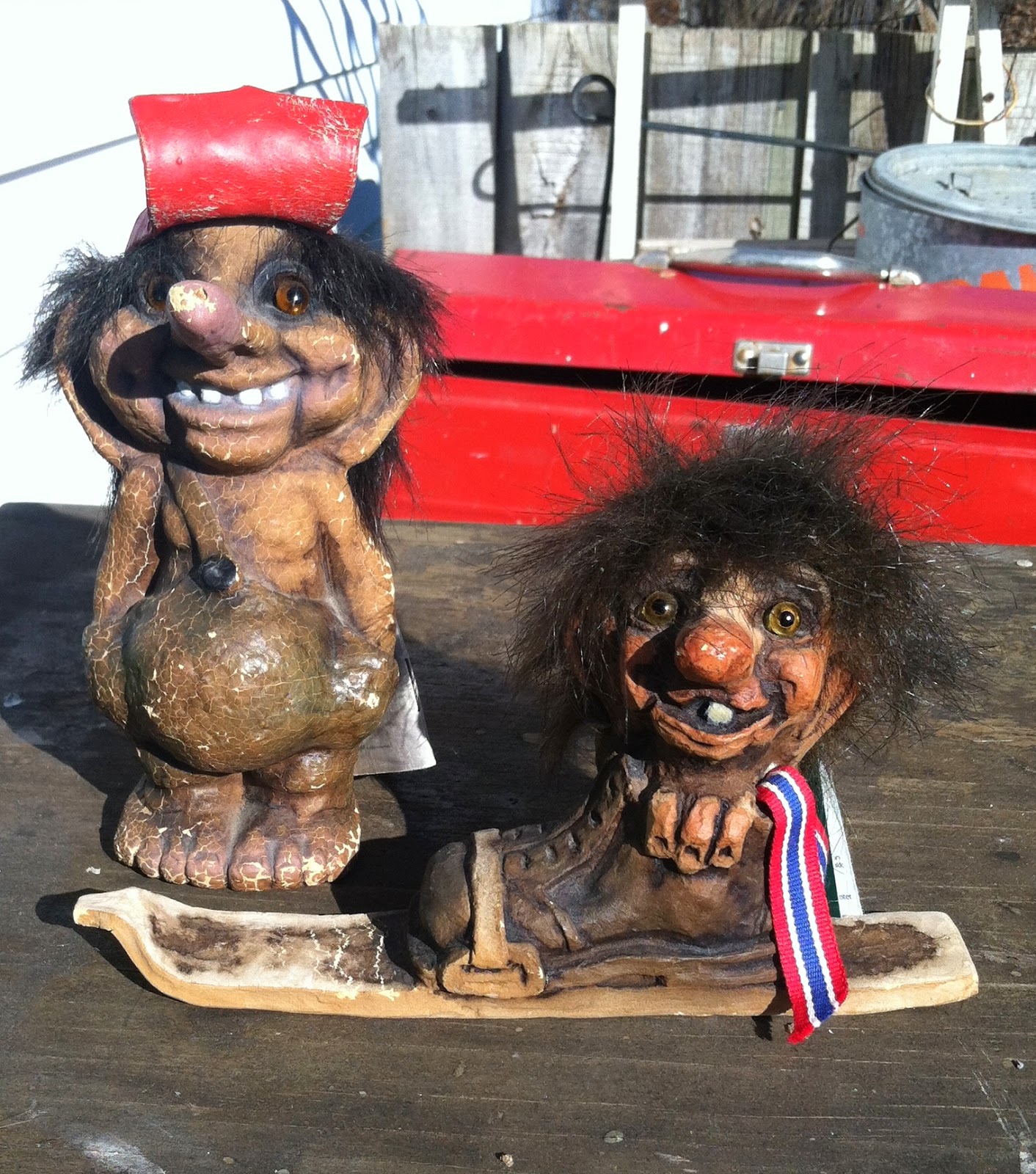 I found these two vintage Ny Form Trolls from Norway yesterday.  I have them on ebay and HOPE they will do okay.  eBay is so fickle right now.  They are quite ugly, but quite collectible. 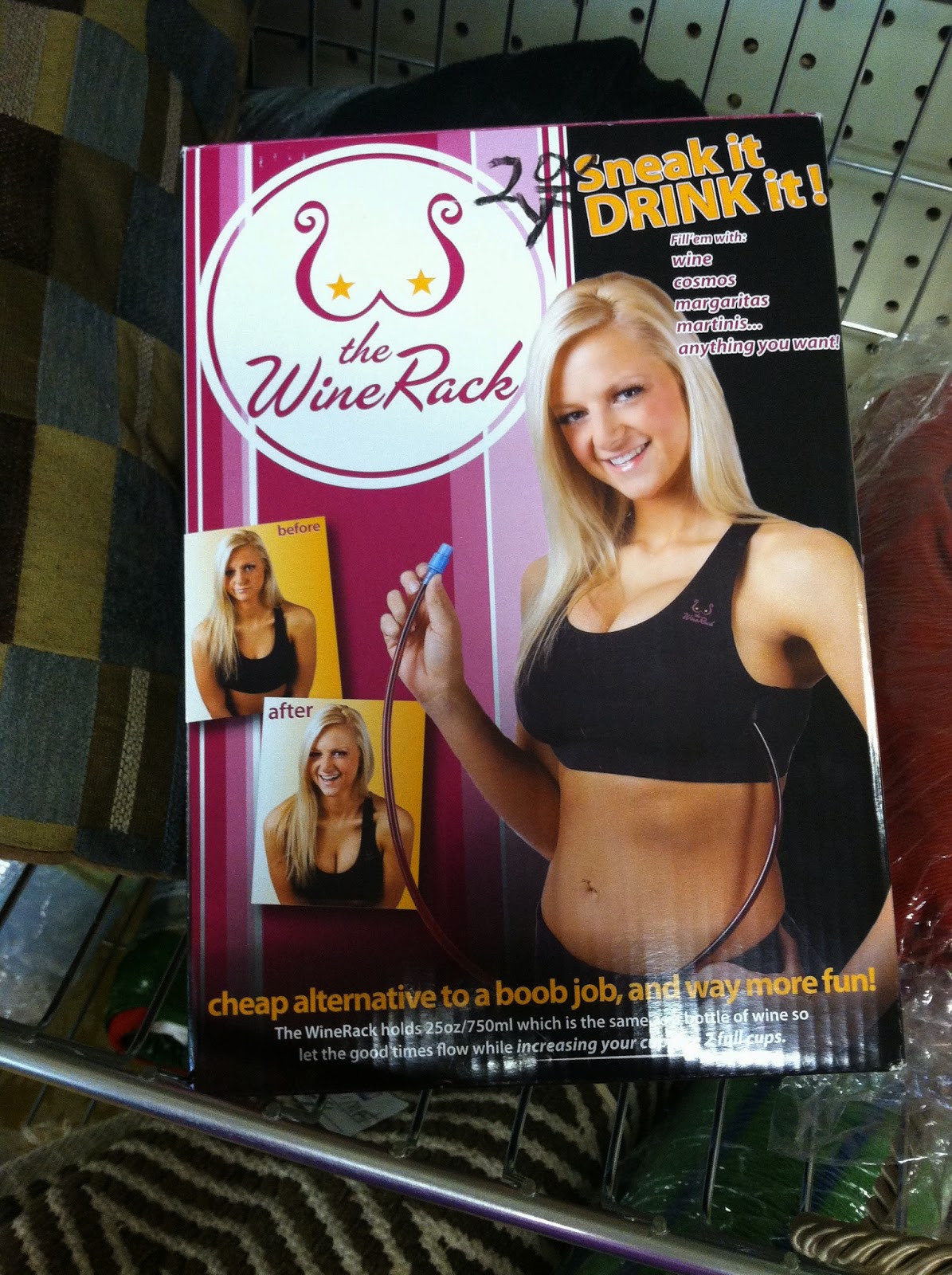 Oddly enough, The BEAN found the Wine Rack Booze Bra at the thrift.  We had seen it on "World's Dumbest" on TV.  I put it on the shelf, then decided on a whim to look it up on ebay.  They tend to sell for about $40-50, so I bought it.  It is new and unused and I cannot imagine anyone actually using it as intended, but it sure is an interesting thing.  Right? 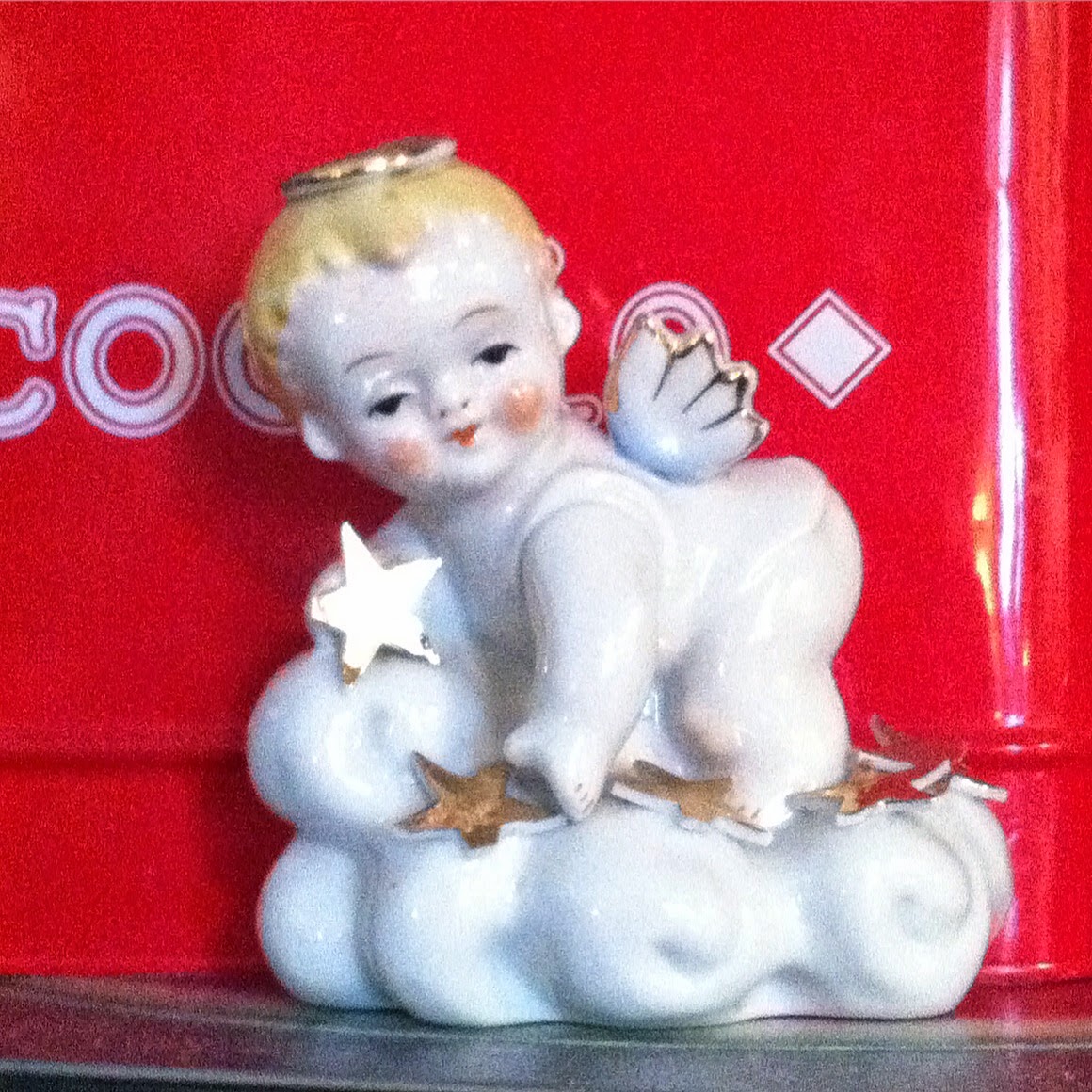 This wee little pocket almost missed my attention at Goodwill.  It was on a shelf full of Made in China tacky little figurines.  He is really quite charming. 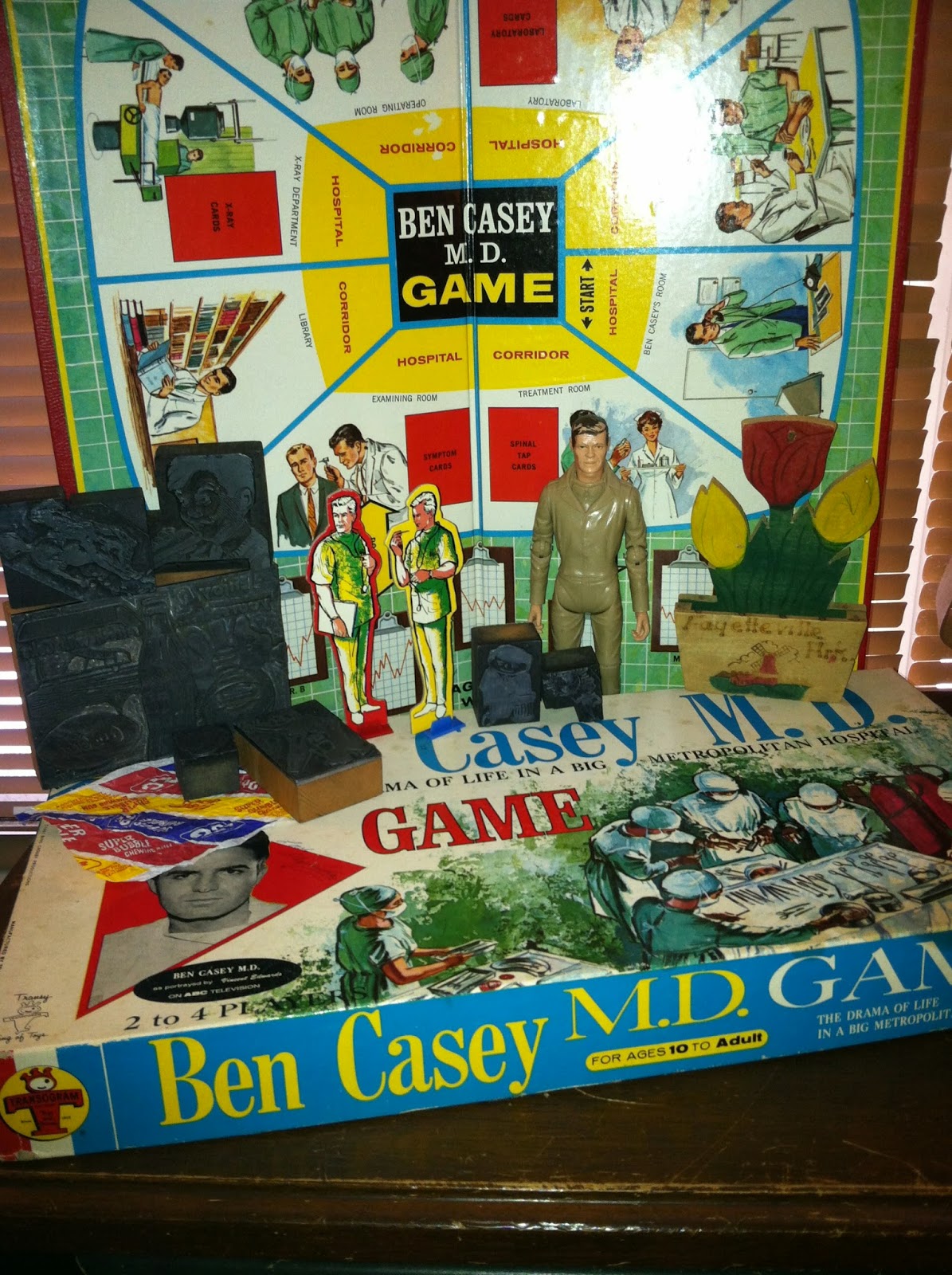 This old Ben Casey MD game is fun with all the old graphics.  I am not familiar with the TV show because I am far, far too young to remember it.  HA HA HA Oh wait, I Googled it and it went off the air the year I was born so I AM too young to remember it.  Whew.  That was close.  I was almost old for a minute.  In that picture there is an action figure I have yet to identify, an old Fayetteville, ARK souvenir wall pocket and a bunch of printers blocks. 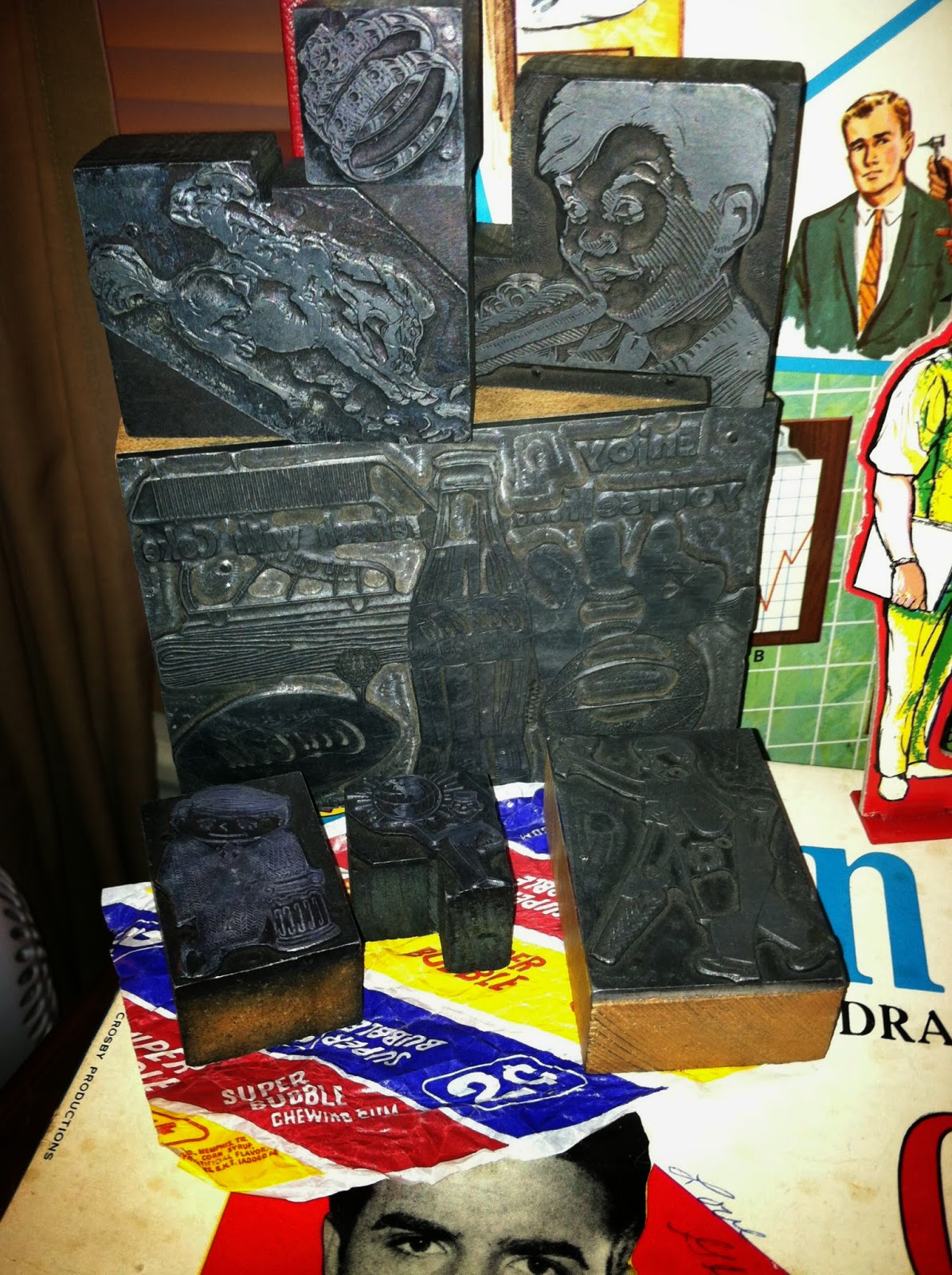 I spotted the Ziploc baggie full of printers blocks at a thrift not exactly known for having much vintage.  I grabbed it then I worried about the price because I have seen random things in a baggie priced $25.00.  These were priced $2.00 so I threw them in my basket.  When I went to pay, the checker said, "Oh my.  I can't believe you found these on the shelf for $2.00.  I had these in the back for someone to research, but apparently they decided not to do that."  She laid them on the counter and I could tell she was not happy.  She kept doing big deep breaths - the time you fill up your lungs then puff out your cheeks and blow all the air out at once. She kept muttering and shaking her head while she rang up my other items.  Then she looked up and me - reached out and put her hand on my hand and said, "I am very happy that you are buying these.  I think they might be worth some good money - so be sure to research them and enjoy them.  I am happy for YOU to be buying them!"  I thought that was nice of her to say that because I certainly wasn't doing anything wrong.  I just found them and bought them. 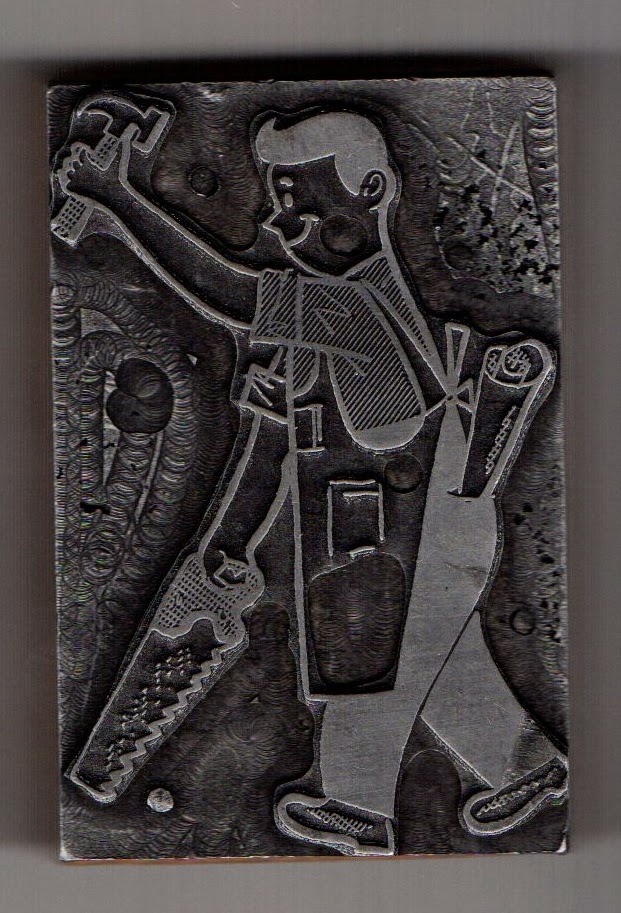 There was this lumber yard block. 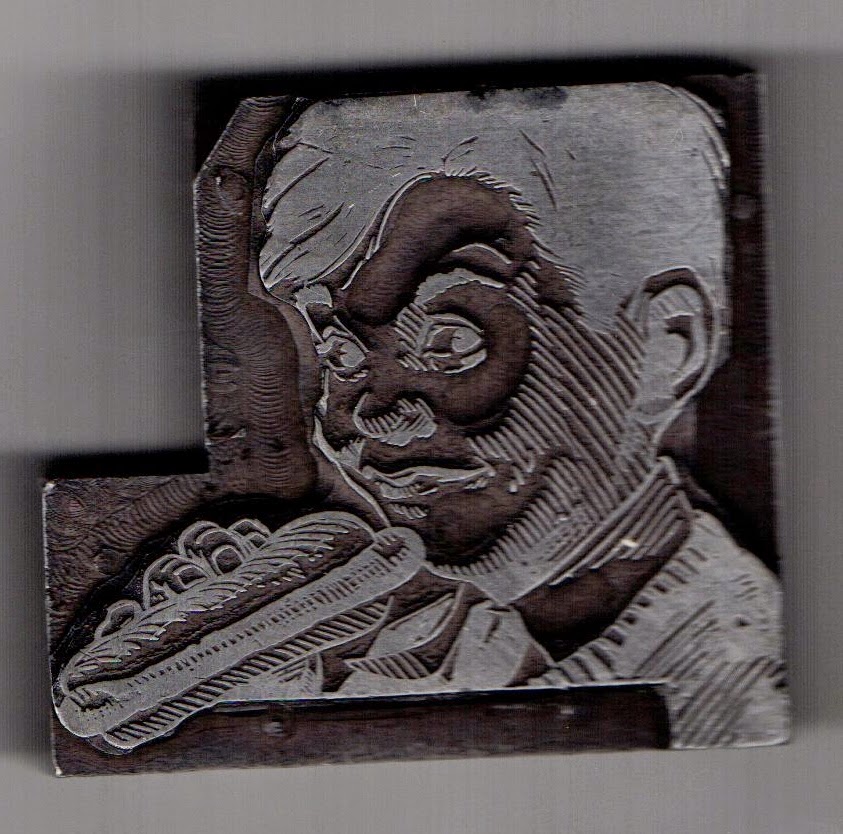 A boy and a hot dog. 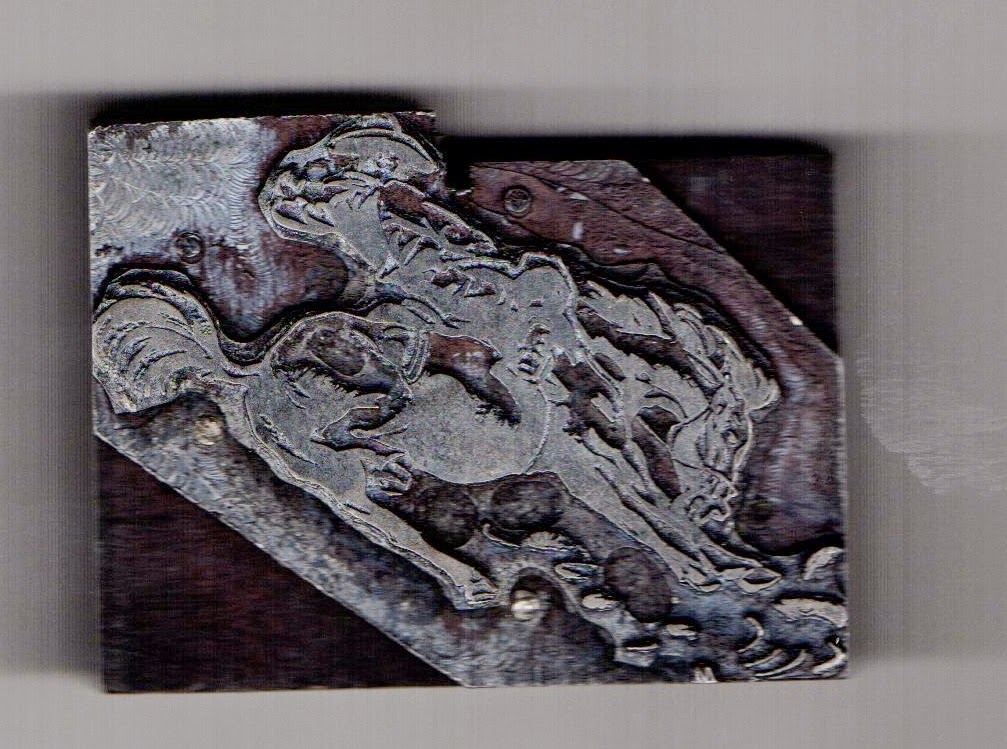 A cowboy on a wild horse. 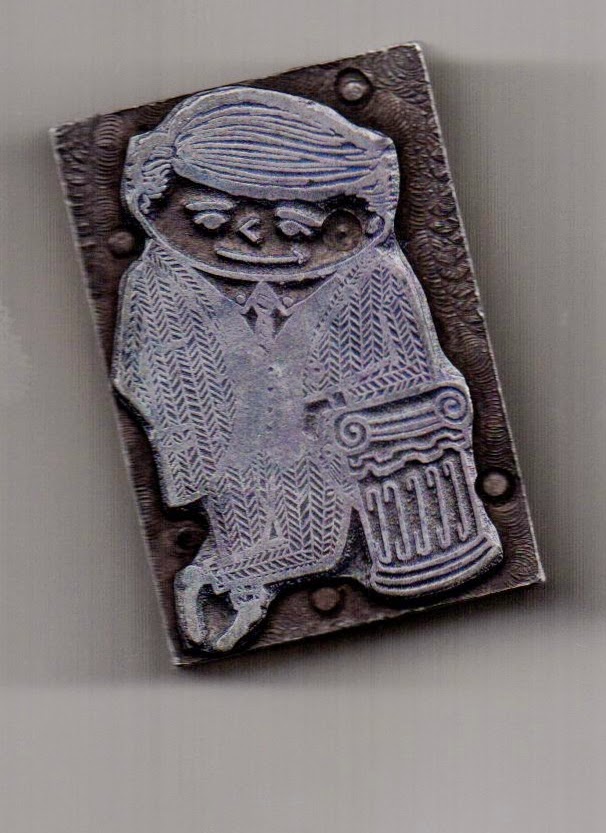 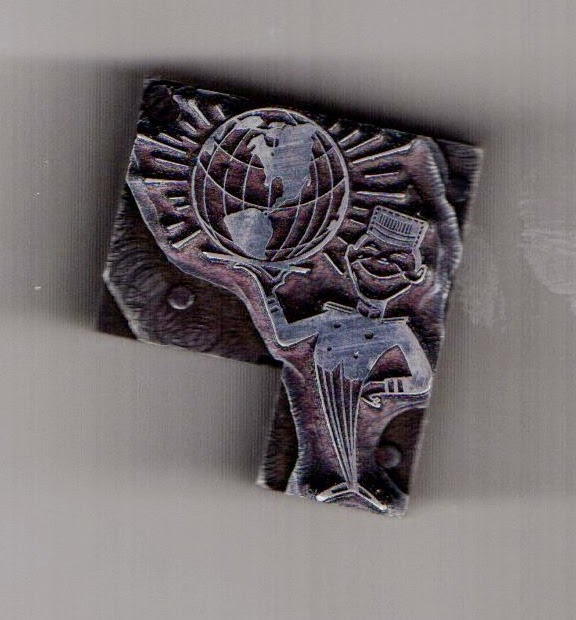 A bellhop holding a globe. 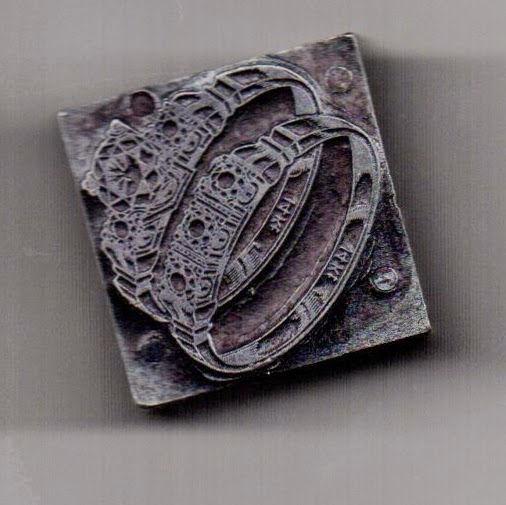 A set of wedding bands. 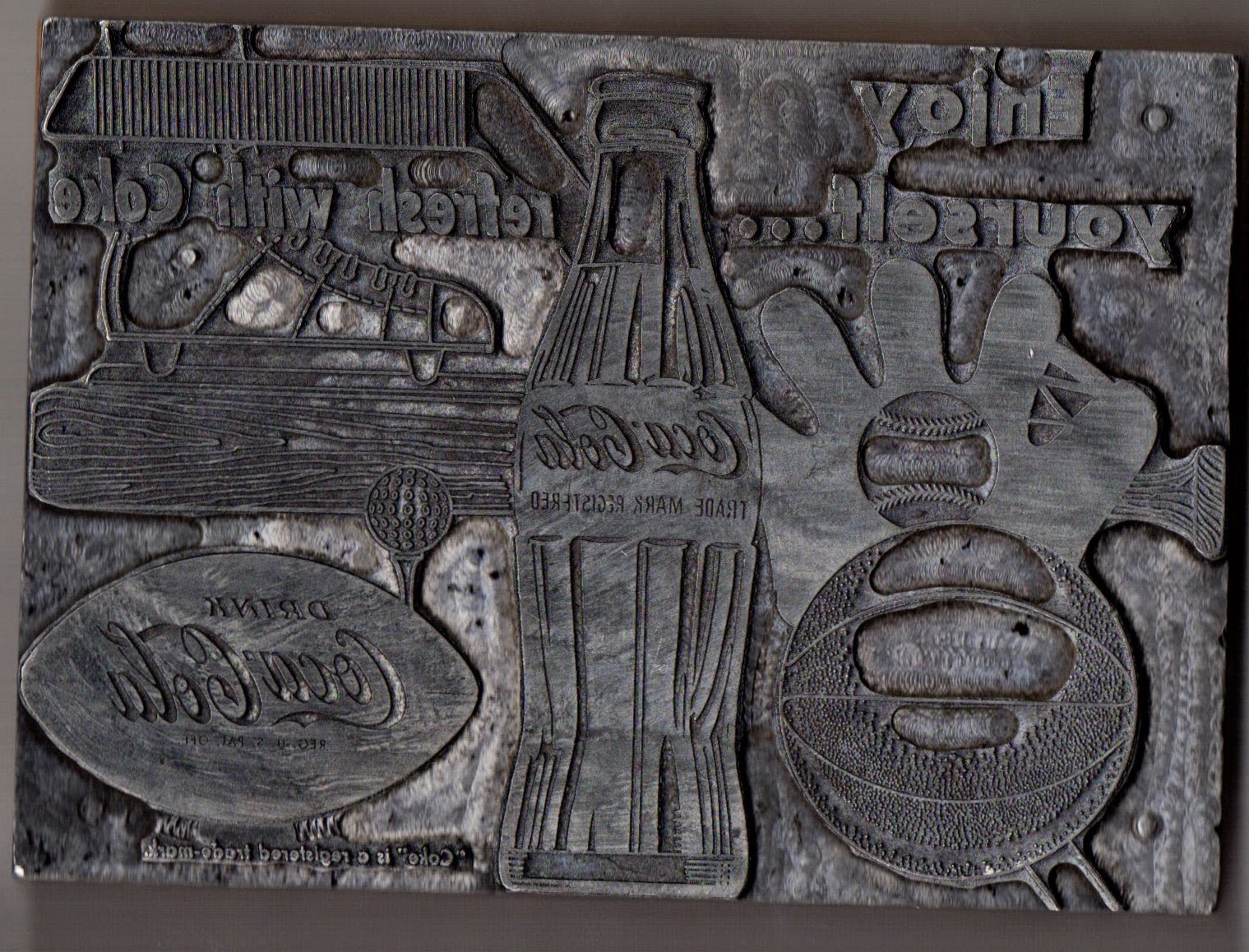 And this.  A Coca-Cola printers block.  I got pretty excited when I saw this one.  It looks newer as far as Printer's blocks go - I mean they haven't used these in forever.  But, I bet it was closer to the end of their use when this one was made.  It's big  - about 5" long, so you can see the graphics on it on display.

So, there you have it.  A few things - mostly all for sale.  The little wall pocket will stay with me, but I think that is it.  Oh, I did buy two watermelon potholders for my collection, and a gorgeous vintage feedack -  all three for the princely sum of 75¢ - that I intend to keep.  Greedy, greedy me.
Posted by Shara at 11:46 PM