We moved to Arkansas from Kansas in 1972.  We bought a house out by the lake where mostly retired people lived.  My Dad was 34, my Mom was 28 and I was 5.  When I started school that Fall, the big yellow school bus drove all the way out to the lake and picked me up.  When I would get on the bus, the driver would pick me up and sit me beside him on the Emergency Medical box.  That way he could keep an eye on me and know I was safe.  There were some Jr. High and High School kids on the bus, but I was the only Elementary student on the bus for FIVE YEARS.

Because we were different than most people in our neighborhood - and by that I mean - YOUNG, they paid a lot of attention to us.  And not good attention.  Like making sure my Dad mowed and my Mom kept the house clean.  One set of neighbors came up one time and casually asked if they could look in our basement because someone had stolen their Grand Piano.  First of all, there are NO basements in Arkansas.  NONE.  Secondly, thanks a lot lady - we didn't take you piano.  A few months later they invited us to dinner.  After sending some time with me, they told my Mom, "She is surprisingly bright - considering her parents."  She said that TO my Mom! 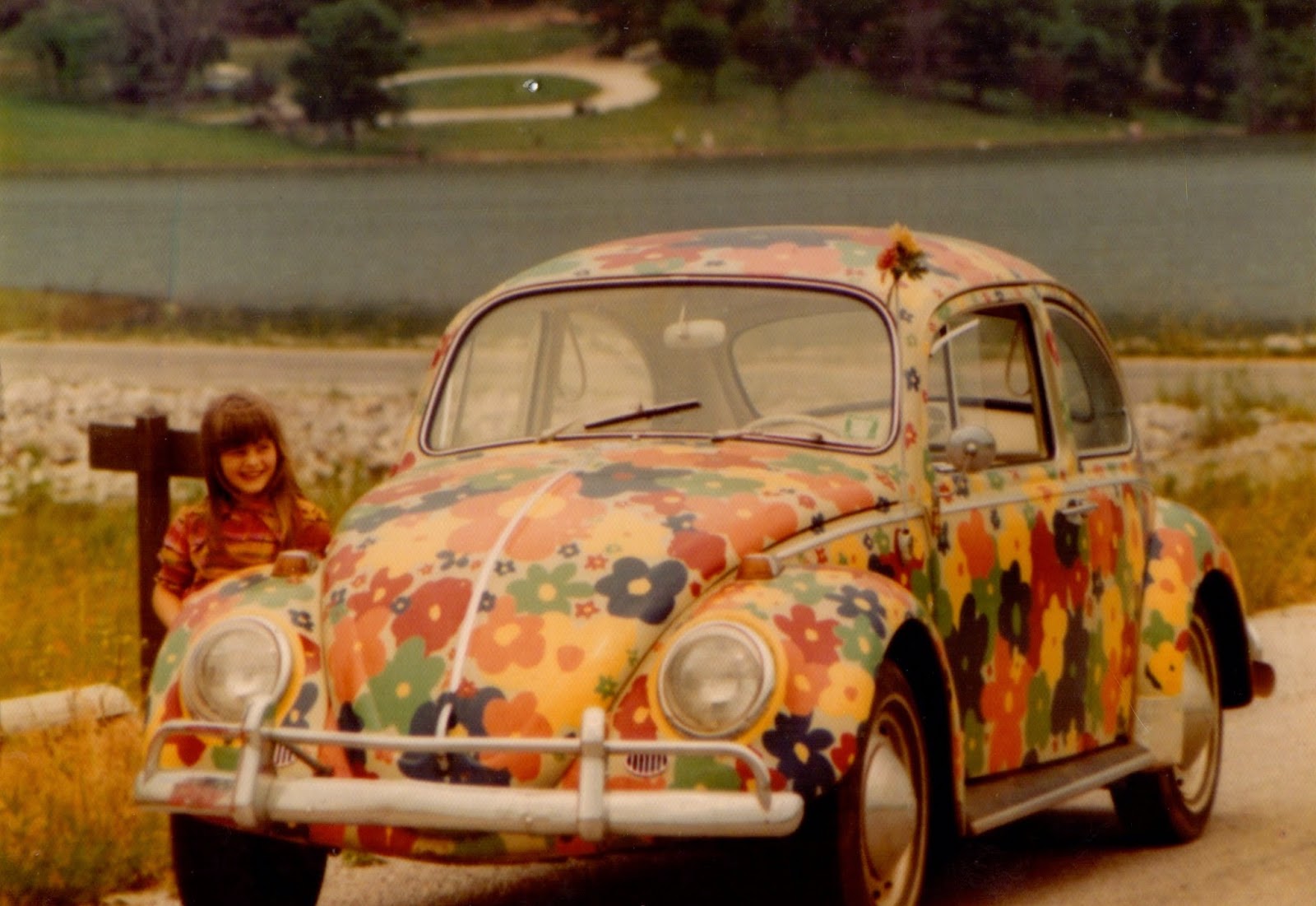 My Dad bought an old white VW bug and my Mom thought it would be fun to paint daisies on it.  So we did.  She outlined them and we all painted them in and painted the centers.  My Mom drove it all the time and we got quite the looks and smiles.  One time, my Mom and I were in town and a Police Car came up fast behind us with the blue lights flashing and he sirens whaling.  They made us get out of the car while they searched it.  They said a bank had just been robbed in a nearby town and the description of our car matched the description of the getaway car.  Because, as you might imagine, flowered covered VW bugs were EVERYWHERE and made excellent getaway cars due to their ability to NOT STAND OUT.  Anyway, they decided they *might* have the wrong people and let us go.

My Mom would often pick me up from school if she happened to be in town at that that time of day. She would sometimes bring our monkey, Amanda with her.  At that time, schools were long buildings with floor to ceiling windows.  As soon as the kids heard the putt-putt of the Volkswagen coming up the circle drive -they would all make a mad rush to the windows to see if the monkey was there that day.  I was in my classroom and I knew that my entire class had their noses pressed to the windows.  But it was years later that she told me that every.single kid in the school was lined up at the windows.  And the teachers.

When I was in the 3rd grade, my Dad was coming home from work in the flowered VW and he rolled it down a huge hill.  He rolled and rolled and rolled and then bounced off the side into a ravine.  He really should have been killed.  No one wore seat belts and I doubt the VW even had any and if there were - they were just lap belts.  He walked all the way out of the ravine and up the other side of the hill and knocked on a door for help.  When they opened it, he was covered in what appeared to be blood and brain matter.  But it was, in fact, most of a flat of garden tomatoes that he was bringing home that had pummeled him and splattered all over him in the accident.  I remember that he was really upset about losing those tomatoes.

While we waited in the Emergency Room waiting room, my Mom got out a cigarette (which she only smoked when stressed or with a cocktail.)  She stuck it in her mouth and then noticed a sign on the wall that said, "NO SMOKING".  She walked over to it and started banging her fists on the sign saying, "DOES THIS MEAN I CAN'T SMOKE?"  I think she was a bit stressed out.   They sent him home and he was in bed for about two weeks.  He turned purple from his neck to his toes, but nothing was broken or injured.  He was just really really banged up.  The day after his accident, we had a multiplication test in school and I didn't do well.  My teacher made me stay in at recess and told me that I needed to study and get a better grade to make my Dad happy since he was at home in bed.  DUDE - I was scared to death and worried - that is why I didn't do great on my test.

The VW sat in a field for many years and then it got hauled off to the scrap yard.  I never even knew a photo of it existed until my cousin sent me this photo this summer.  It sure brought up a lot of memories!
Posted by Shara at 11:39 PM