I never really leave my booth at The Junk Ranch.  I feel bad leaving Lara to watch over my five thousand items while she's trying to sell her items.  I do have to make a bathroom run every once in awhile though.  (This may be TMI, but at The June Junk Ranch - none of us used the bathroom ALL DAY LONG.  And we drank and drank and drank.  And by none of us, I mean NONE of the vendors.  It was so weird.  Super hot and dehydrated, I guess.  It was such a relief to come home and finally .....well - YOU KNOW.  SO much in fact that Lara texted me to let me know she had finally well, YOU KNOW.  It's like "We're going to be okay!  Hooray!"

On my last run of the day, I spotted some vintage Christmas in a booth so I detoured a minute to check it  out.  I had sold all my vintage ornaments, so I thought if they had some I might pick them up.  They did have a few boxes, but they were a bit ordinary and they were a bit high for me, so I was about to leave.  But then I spotted a big cardboard box on the ground and in it.......Elves, pixies and other cuties.  OH MY.  I had seen a lady carrying around the cutest vintage Santa earlier and I yearned for it so much I considered bonking her on the head for it.  She was older, I could have taken her.  :)  But, she was also my friends mother, so I held myself back.  It was SO hard.

Flash forward in that box  - an identical Santa!  I couldn't find a price, so I asked.  The price was more than I usually pay for things - $5.00 each -  but let's all remember that I am the cheapest person ever.  I dug in the box and came up with six that I loved and she made me a group deal on them (without me asking).  I paid $20.00 for all six, but I had just sold something for $20.00 that I paid $1.00 for - so I like to think I paid $1.00 for them.  (Junker Math).  And, really, $3.33 each is actually a super good price, I think you will agree.  She told me that the box was overflowing that morning. Lara knew her and she is a local person so I cannot imagine where she found a hoard of such cuteness locally!   And WHY DIDN'T I FIND IT FIRST? 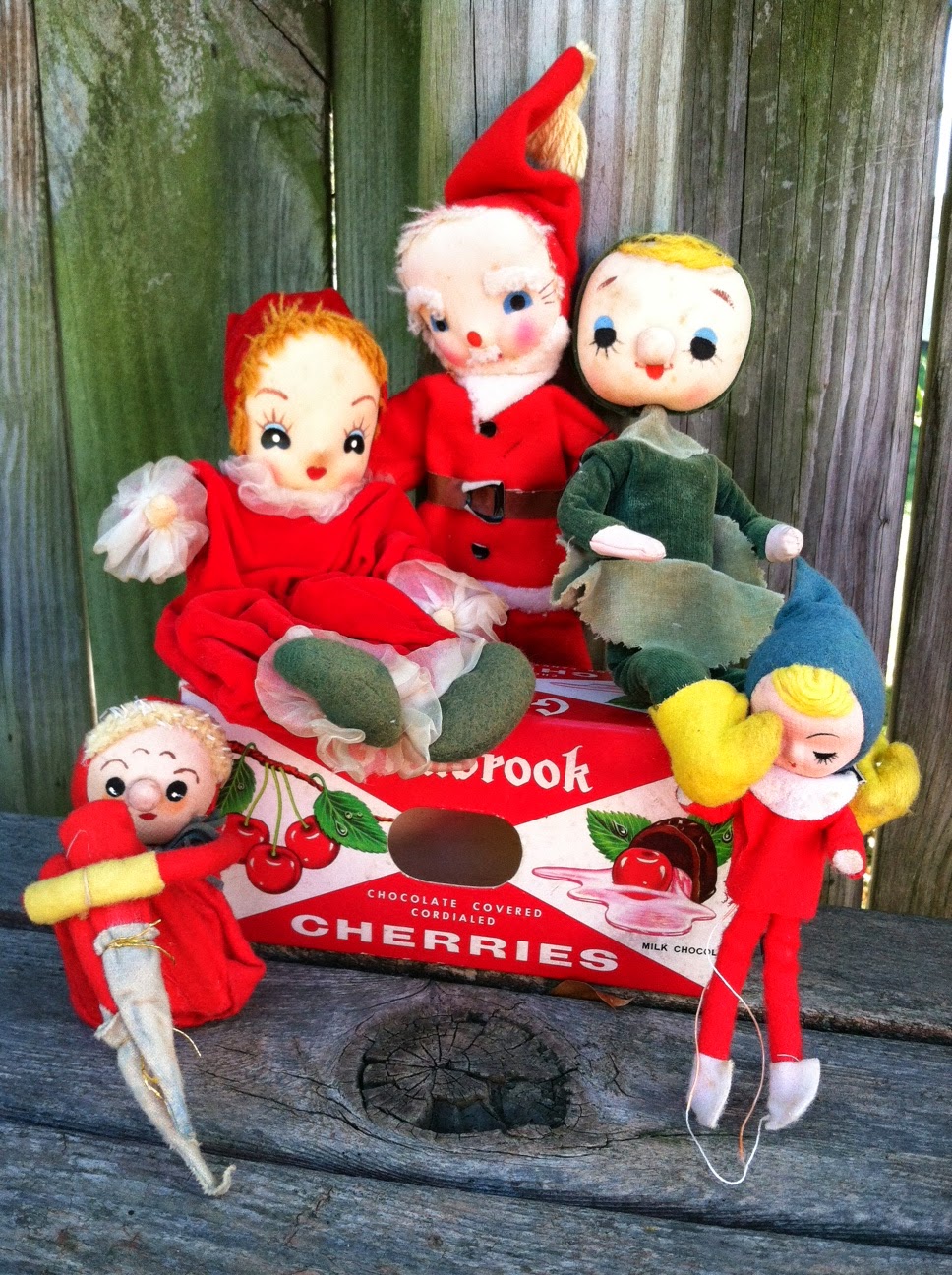 Aren't they just the BEST?

They are sitting on the Chocolate covered Cherry box that Marci brought me all the way from Kansas. 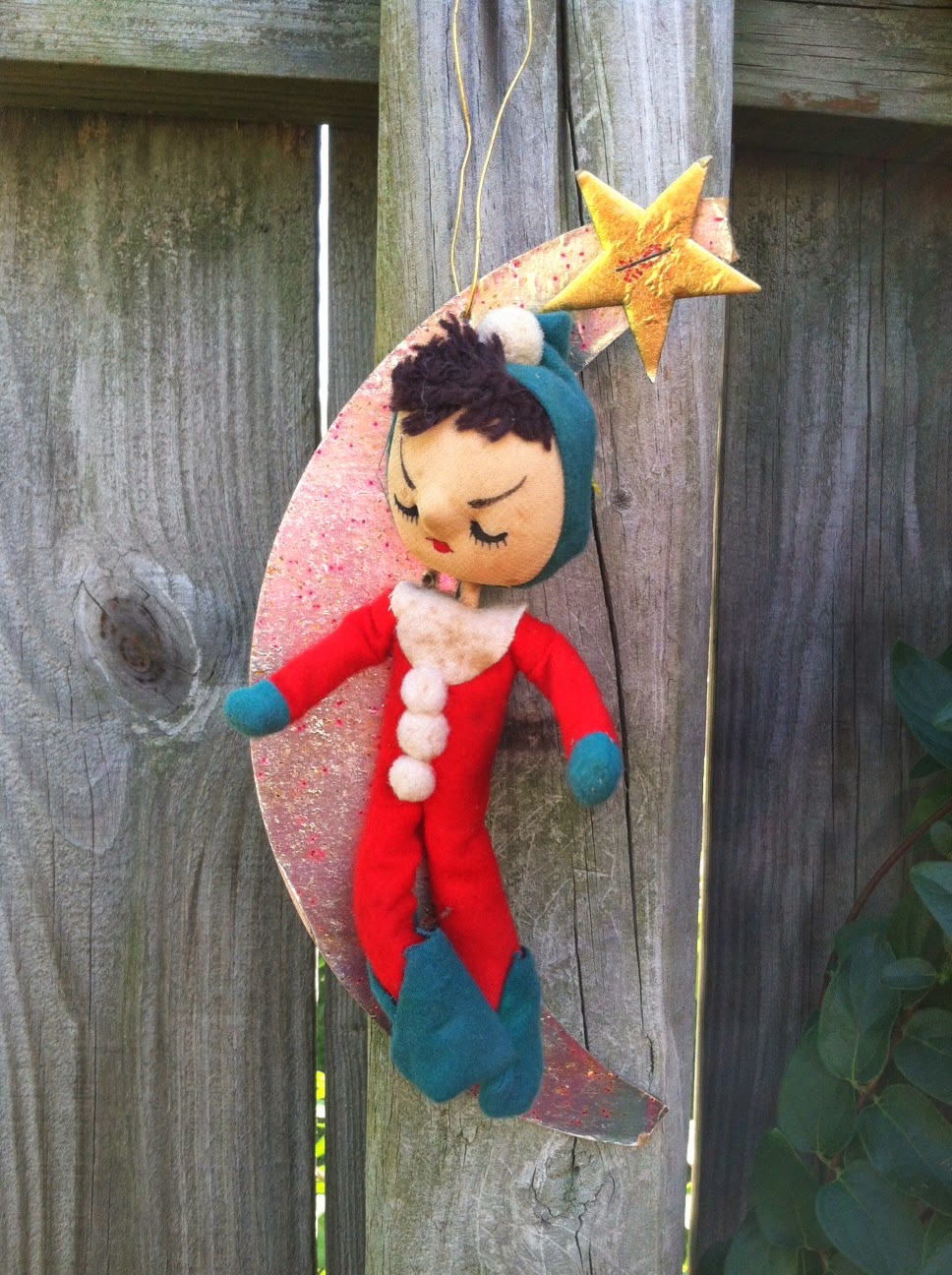 This one on the paper moon is a favorite.  I have never seen one like this - SO CUTE! 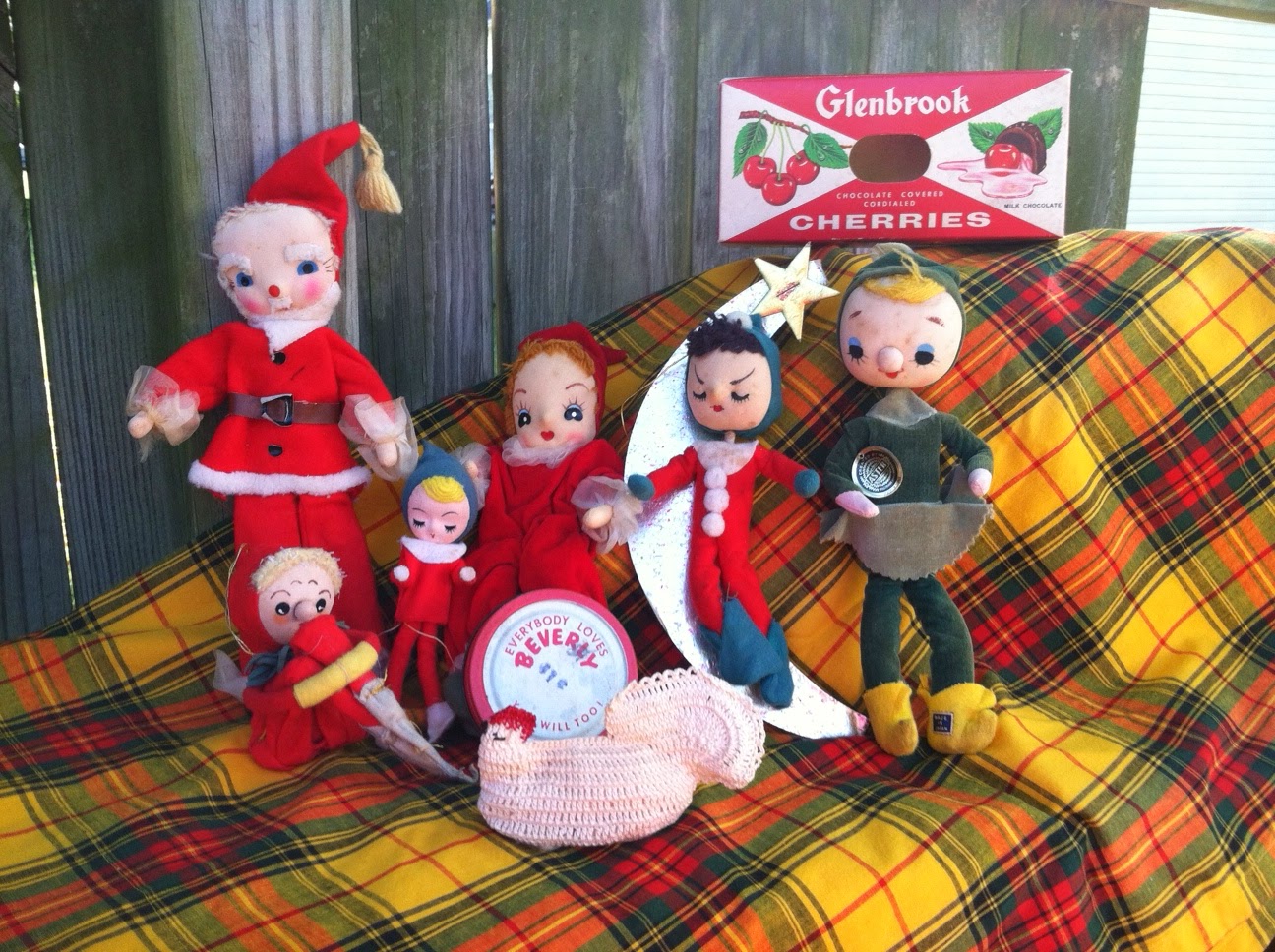 On another bathroom run I scored the plaid tablecloth for $1.00, the little crocheted chicken for $1.00 and the old jar lid for 50¢.

Just enough junk to make me happy.  I sold a lot of stuff, so I thought I needed a little something for myself.  You do that too - RIGHT?  (Tell me yes, okay?)