I got up at 6:30 Sunday morning which is just an ungodly hour to me.  I had one half of a cup of coffee because I knew the bathroom arrangements at a Street Fair would be a little, eh - gross.  I met my booth partners at the Wal-Mart parking lot at 8:10 and we were off to set up.  We got there about 8:30 and were still able to drive down to our spots.  As luck would have it, our spot was at the end of a driveway to a a vacant house, so we were able to pull in to the driveway and park right there.  There had been the possibility of having to park blocks away and carry things trip upon trip and I was really, really not looking forward to that part.  To say the least.  So having the car right there was wonderful for unloading, for not having to unload the cooler, for an emergency phone charge (or two) and for an occasional "I need to go to the car for something" lie to get away from cigarette smoke.  A side note to the cooler - I ate a banana in the morning and couldn't find a trash can, so I laid in on the back bumper of the car.  Flash forward to 2:00 this afternoon when I notice that banana peel still on the bumper after a ten mile drive, stoplights and a drive thru Popeye's run.  I'm sure we gave people a laugh at my banana peel. 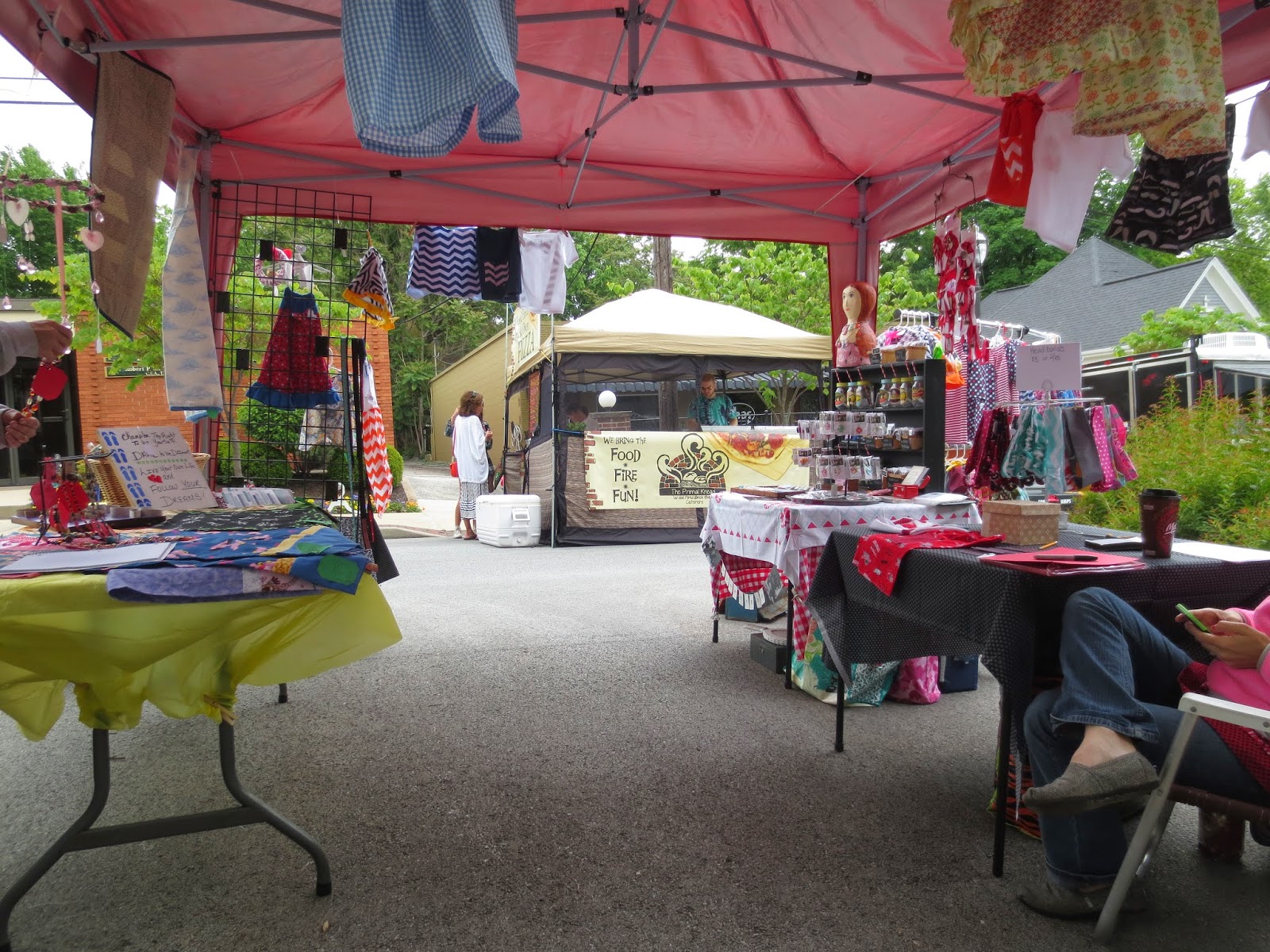 From the back looking in.

There were to be five of us setting up, but one had a son graduating and was so busy that she just never got her stuff gathered up, so she was out.  Another lost her car keys and couldn't drive (oh my) so she was out.  So, that just left three of us.  We designed our layout so that people needed to step in and I know now that was a mistake.  It got so crowded that people could only walk past.  They would stop, but they couldn't really come in and circle back out because of the crowds.  Nest year we will set it up across the front of the tent and out into the sides more. 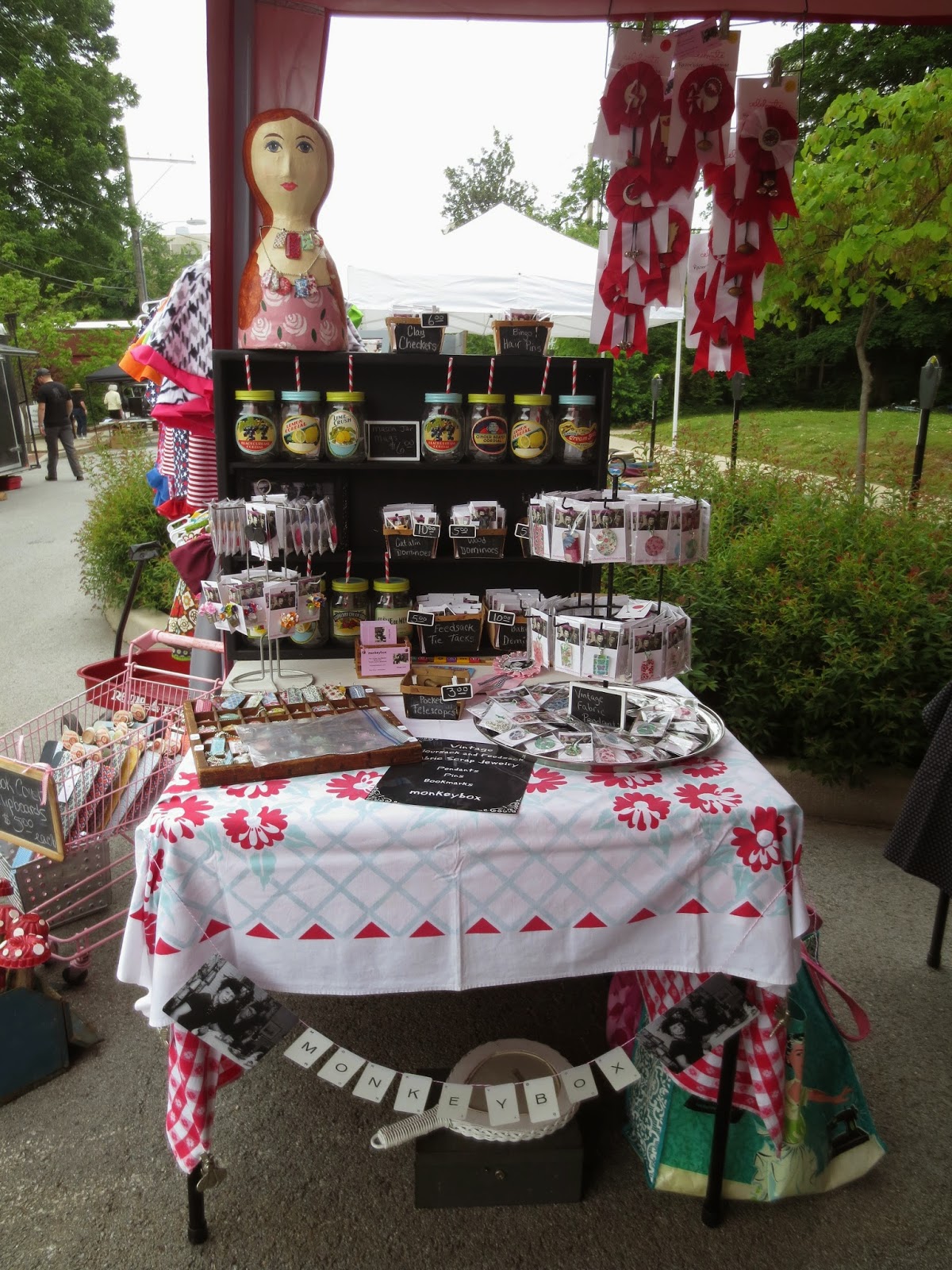 Luckily, my things were on the side that people could see so I did make a lot of sales.  A lot of sales doesn't necessarily mean a lot of money when most of my things are under $10.00.  I was pretty happy with the amount of things I got into my small card table area, but it still didn't' seem too crowded.  Somehow we turned the table the wrong way and I didn't notice it until I was done so the tablecloth isn't long enough, but that's just something I noticed. 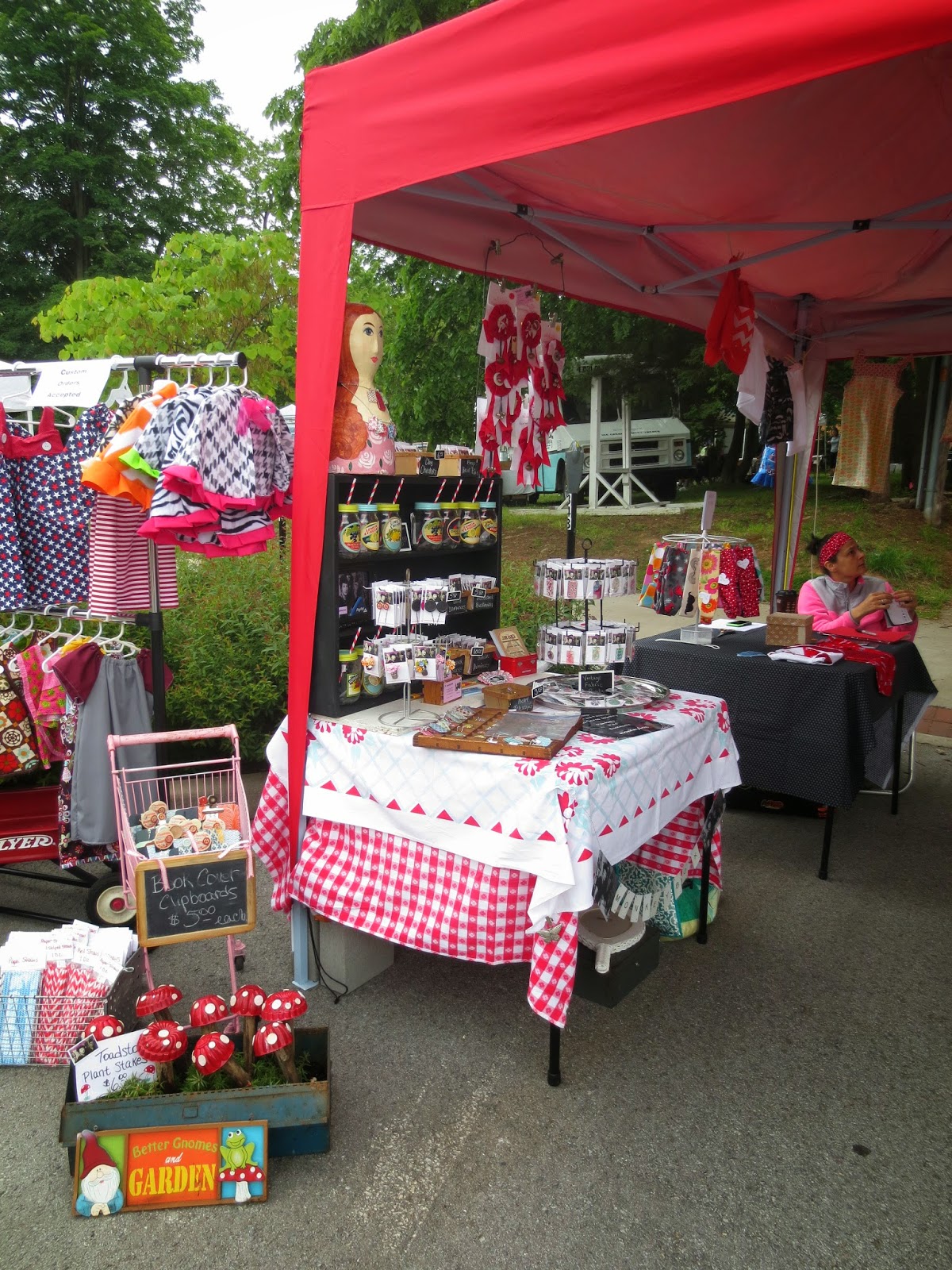 This is how it looked when you walked past.   I didn't really know my booth companions very well before yesterday, but we had SO much fun.  We all enjoyed people watching and man, were there people to watch! 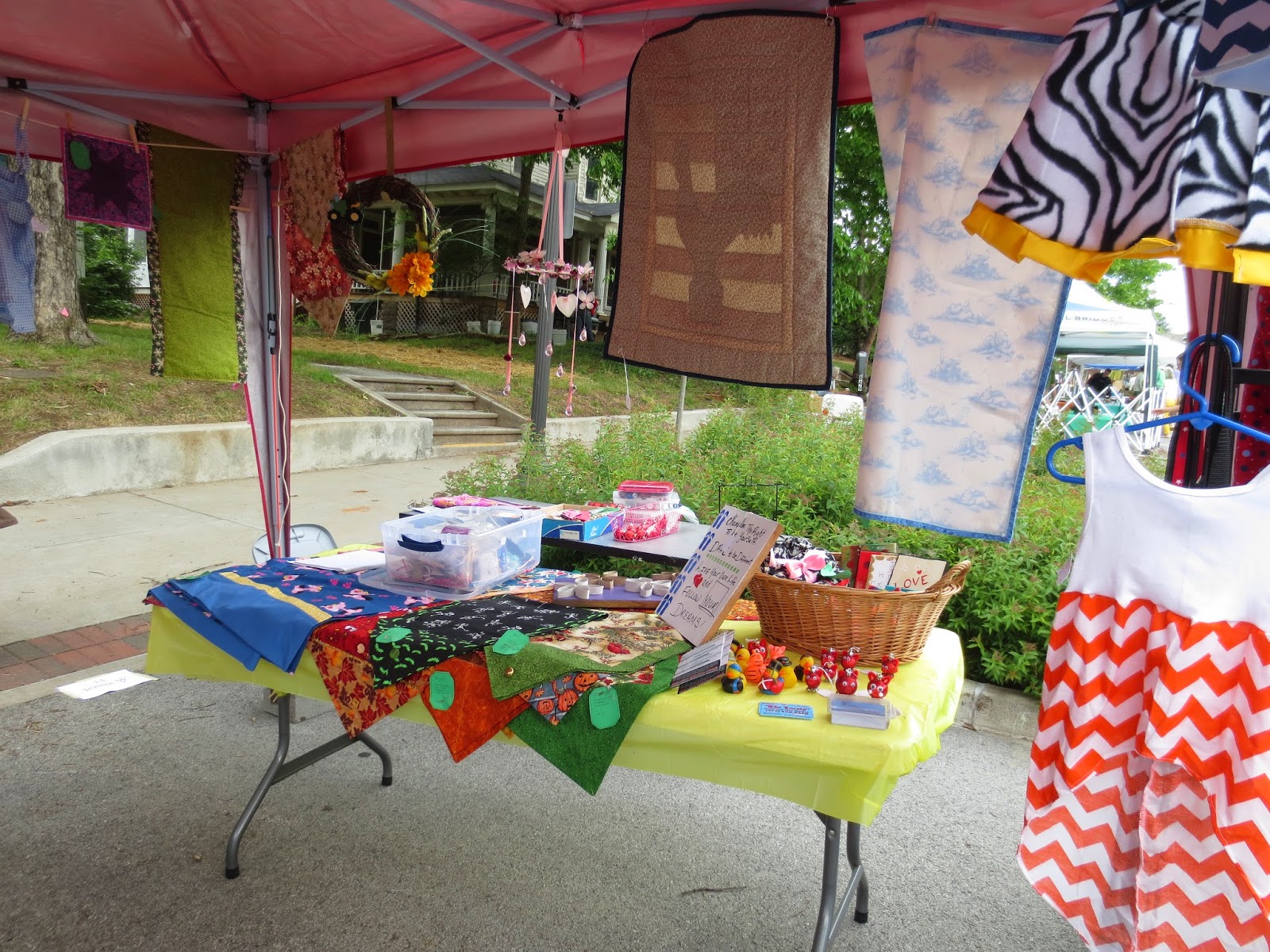 One of the ladies only brought a few things and she sold about three things, but she was super happy about it and ready to do it again. 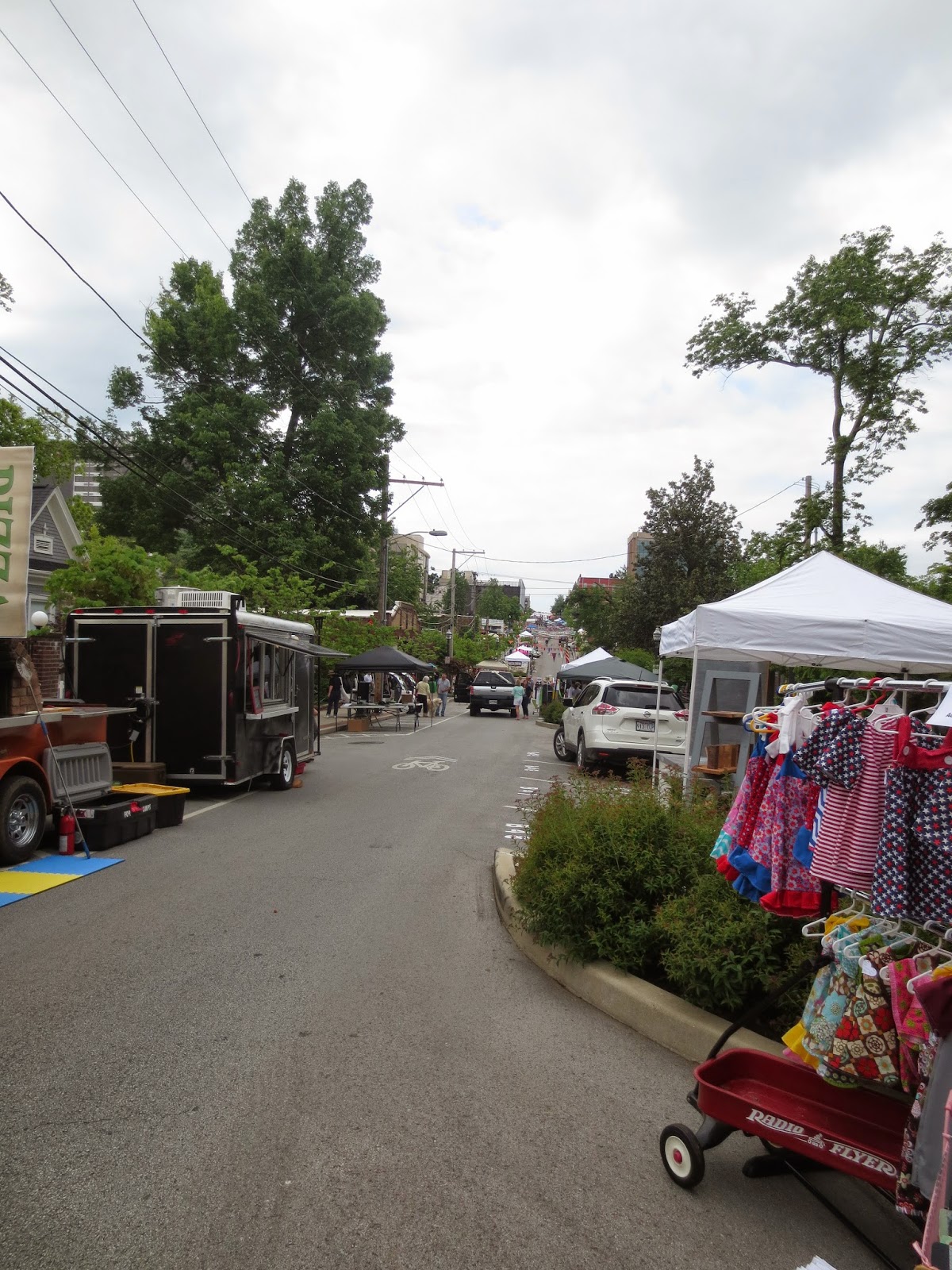 Here's the street early in the day. 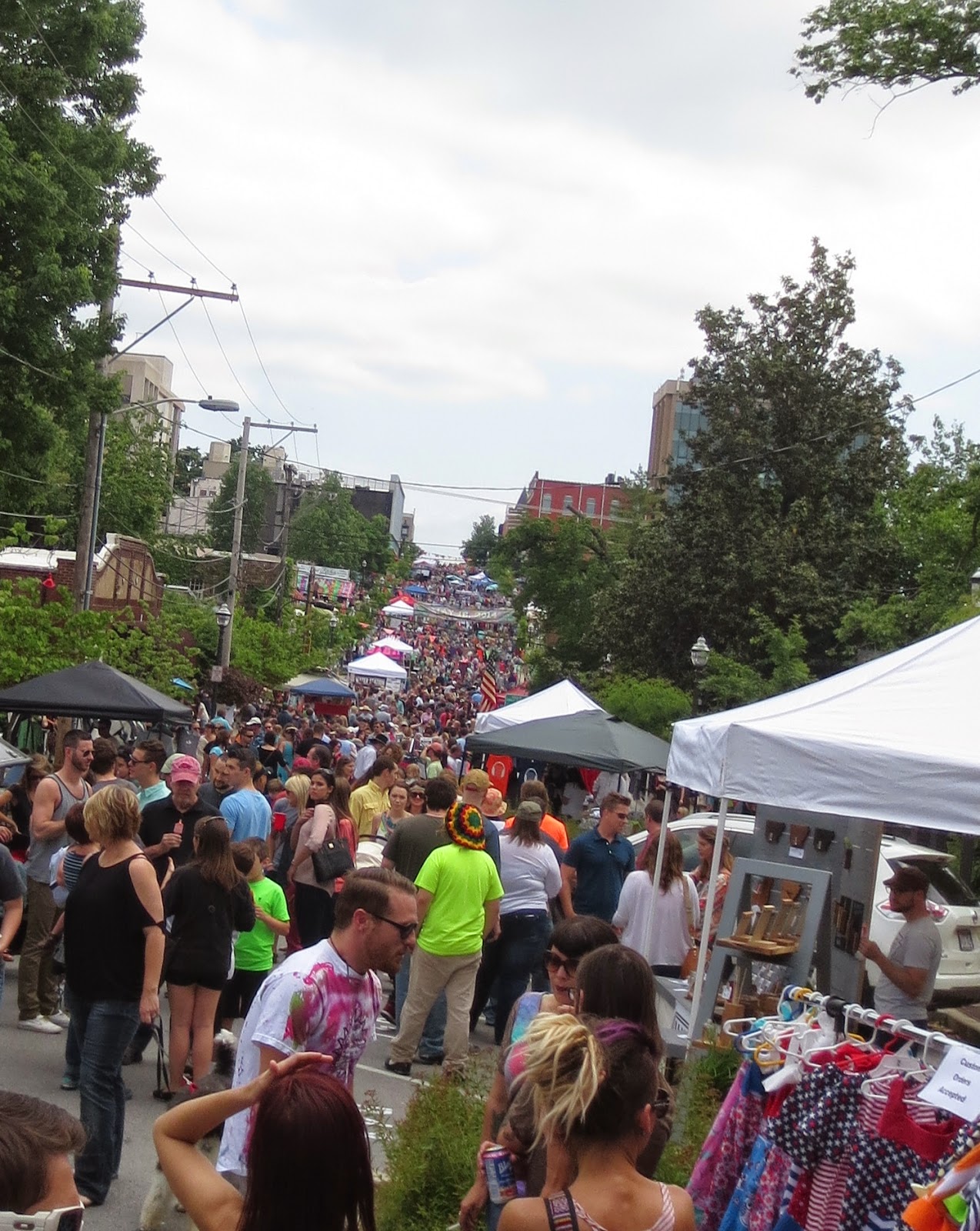 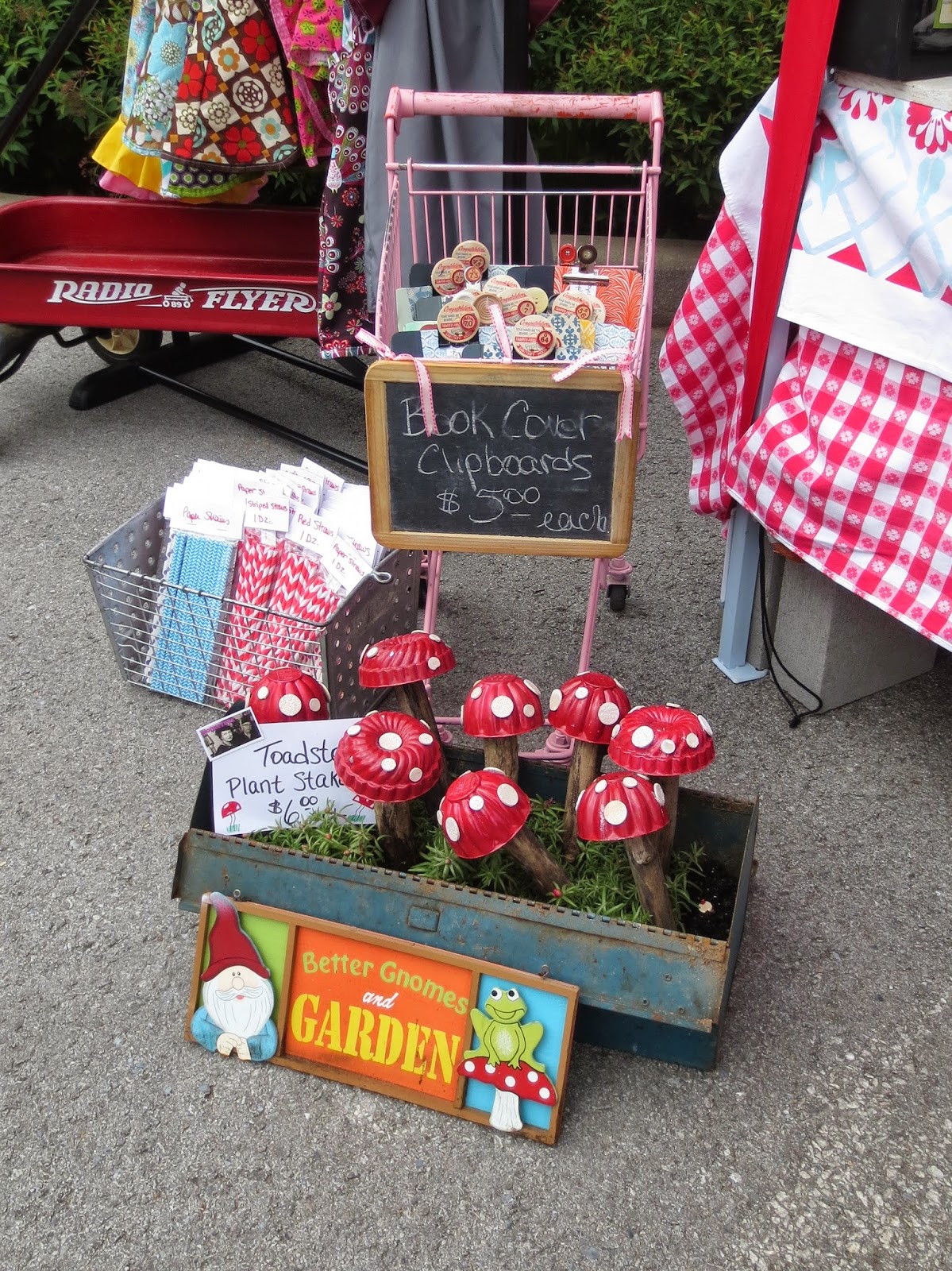 I sold a lot of the upcycled Book Cover Clipboards.  Several people wanted to know where I got the book covers and how I rounded the corners and where I got the milk cps and BingO pieces I added to them.  I assumed they were going to try and make one, but they ended up buying them.  Two young girls told me that they were Nurse's and they needed clipboards to fit into their scrubs pocket to keep track of things.  One said her Grammy played Bingo and that she would alwsys think of her when she saw that BINGO marker.  Oh that reminds me of a story!  This older couple came in and they saw the BingO hair pins.  They looked through them, but didn't pick one up,  When I went to talk to them, they asked me if I happened to have any  with "O69" on them.  I looked through them and I didn't.  Then the man  - who was in his late 70's told me that they play Bingo and O69 is a "private joke" with the Bingo Caller.  Uh, I don't think anything concerning "69" is a "private joke".  They ended up buying some anyway. 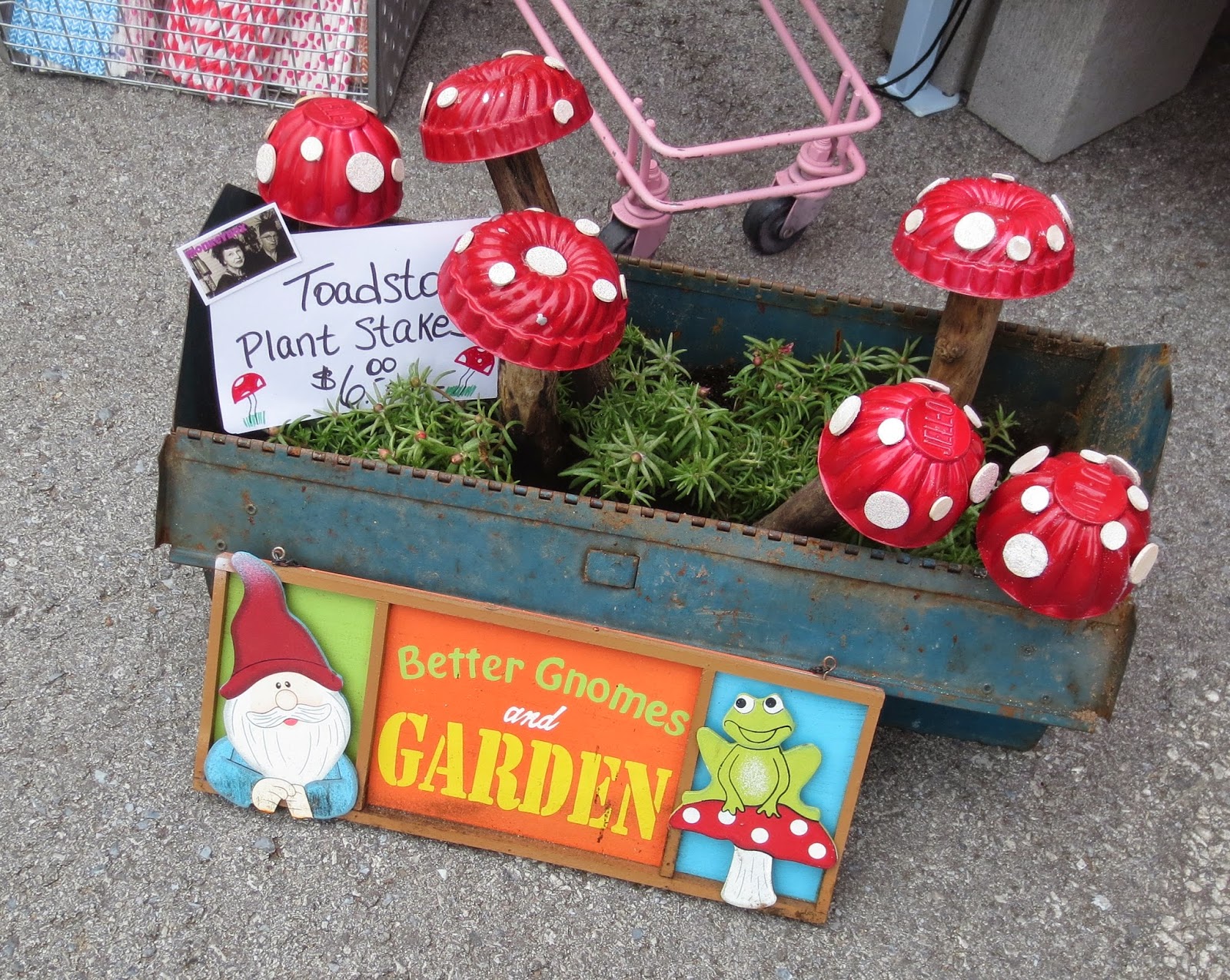 I sold almost all of the toadstools.  I think I could have sold a lot more than I even made.  But since they were on the ground, once it got SO crowded, no one could really see them.  I need to make more for the Farm Fresh Junk Sale which is June 12th and will be here before I know it.  PANIC! 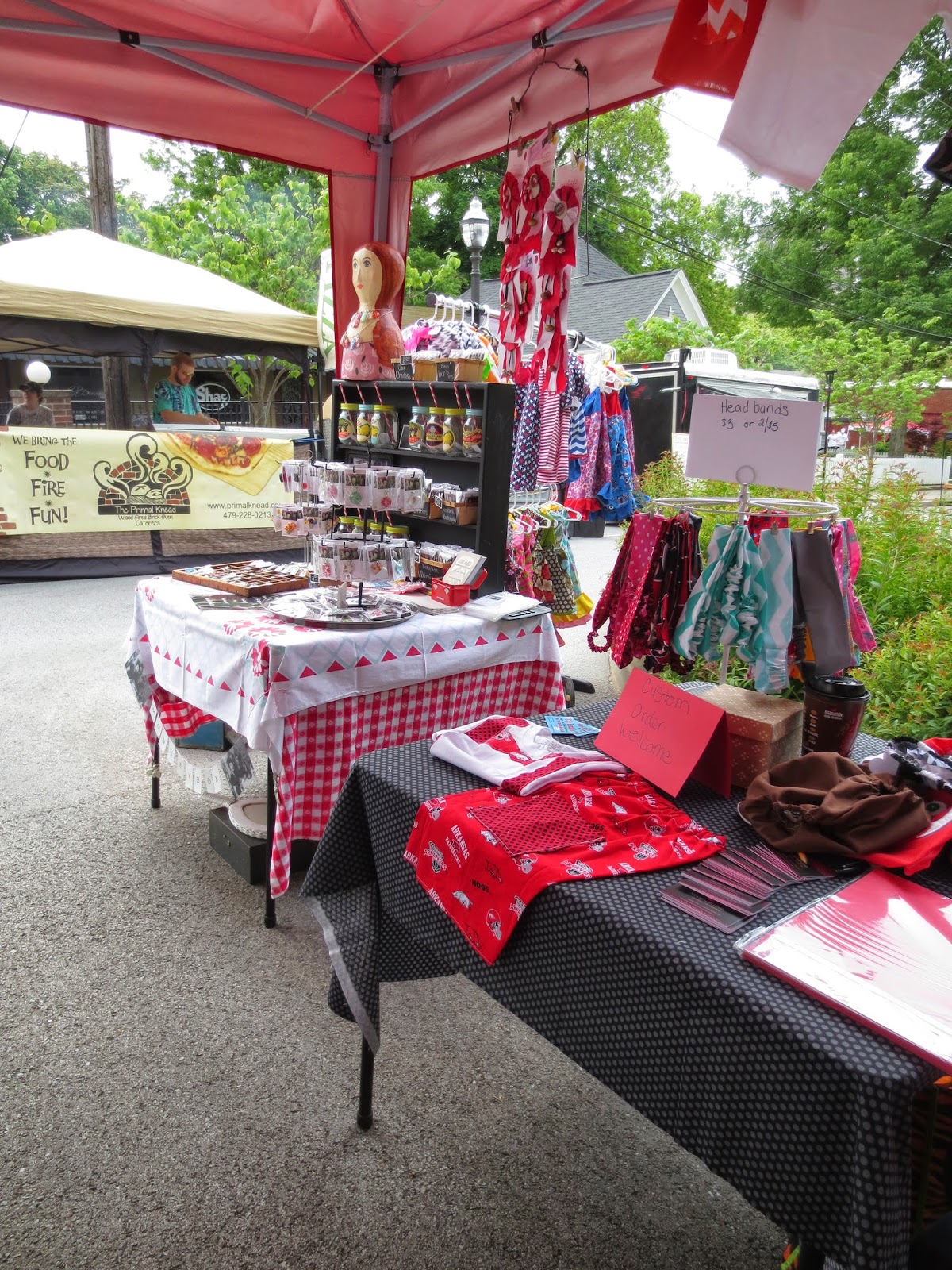 I know now that if I would have put my jewelry more outside the tent and in the sun that it would have gotten more attention because people could have seen it when they passed.  I did sell some and that made me happy.  Some were to little girls that "like the pretty colors" and didn't care that it was 80 year old vintage feedsack material.  *sniff*  But, at least they liked them. 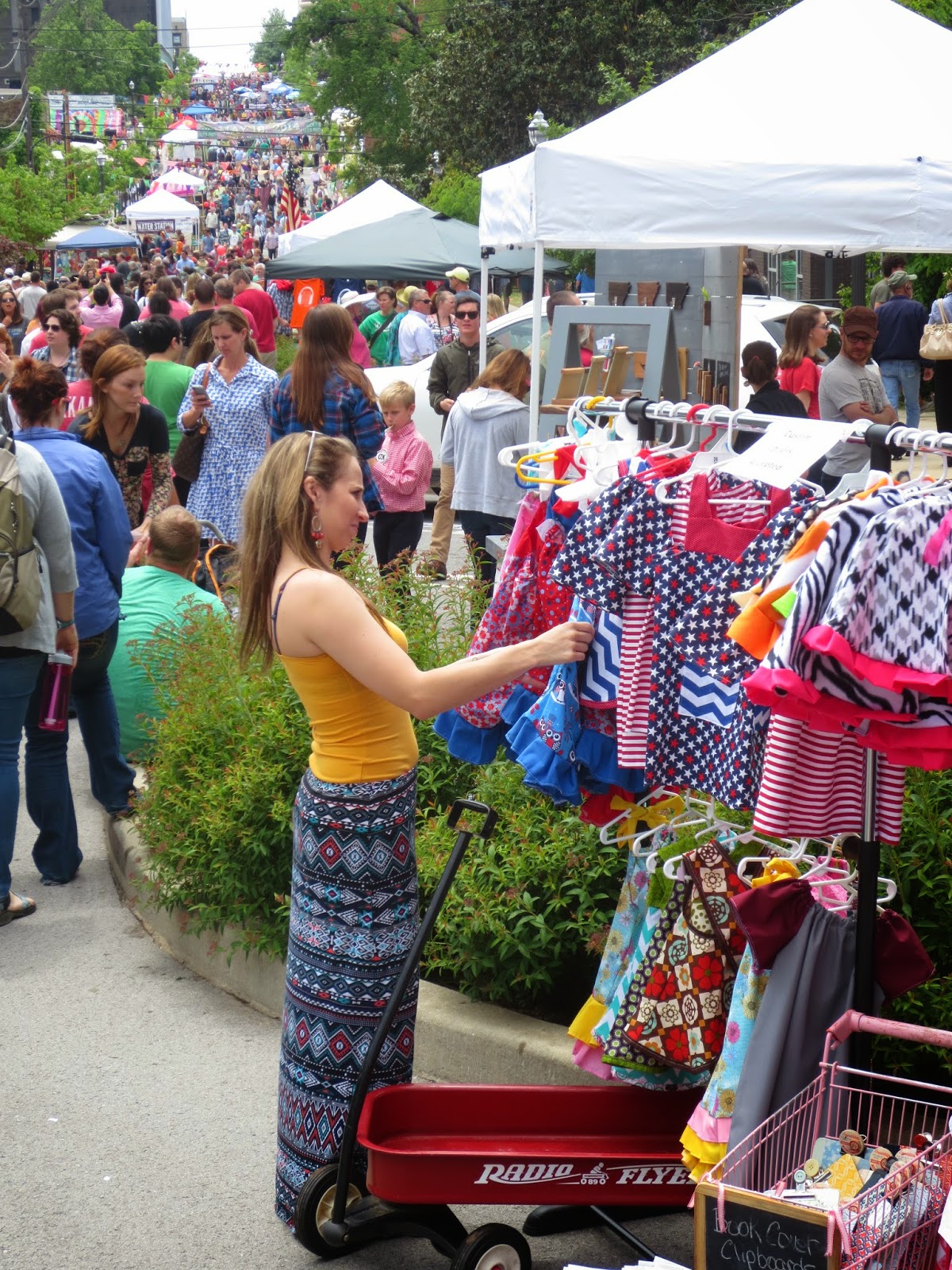 All in all, it was a fun day, I made some money, learned some things and had a lot of fun.  It's all a learning curve and every venue is different.  I really had no idea how HUGE this event would be or the crowds that would flock down that street.  I also learned that standing on concrete for eleven straight hours will wreck your knees for a day or so.  I am bad about not sitting down -  I like to stand and talk to people.  For the junk sale, I will take a stool so I can perch some times and take the proverbial "load off".

I wanted to thank everyone for all the nice comments and the well wishes.  Doing these events is really way outside my comfort zone since I am actually kind of an introvert and not too confident in the things I make and do.  I don't know how to handle compliments (or criticism for that matter).  Some people have husbands out of the country for most of the year and have three kids to wrangle and LOTS on her own plate, yet she texted me "Good luck and I'm thinking of you" the day of the event.  Other people actually came to see me and my set up AND brought me a delicious Cherry Limeade* from Sonic.  She also brought her delicious little ones who saw me, shouted out my name and excitedly grabbed my hands (which I have been waiting for them to do!) and then yelled "Let's go to the BOUNCEY HOUSE, Shara!"  I hated it that I couldn't go with them.  Some day soon I am going to hold those tiny hands and have some fun with them!

One of my booth partners manages a Spa on Block Street so we had the key to an actual restroom.  Yea!  But, it was about two blocks away, around a parking lot, and up a flight of stairs.  Too much work!  So the yucko porta potty it was......TMI?