Stop! Thief! (And An Auction!)

There was some big excitement at the Flea market last weekend.  They caught a shoplifter!  A girl in her twenties or so came in with one of those empty drawstring bags on her back.  She proceeded to make her way through the store filling up that bag with THIRTY items! 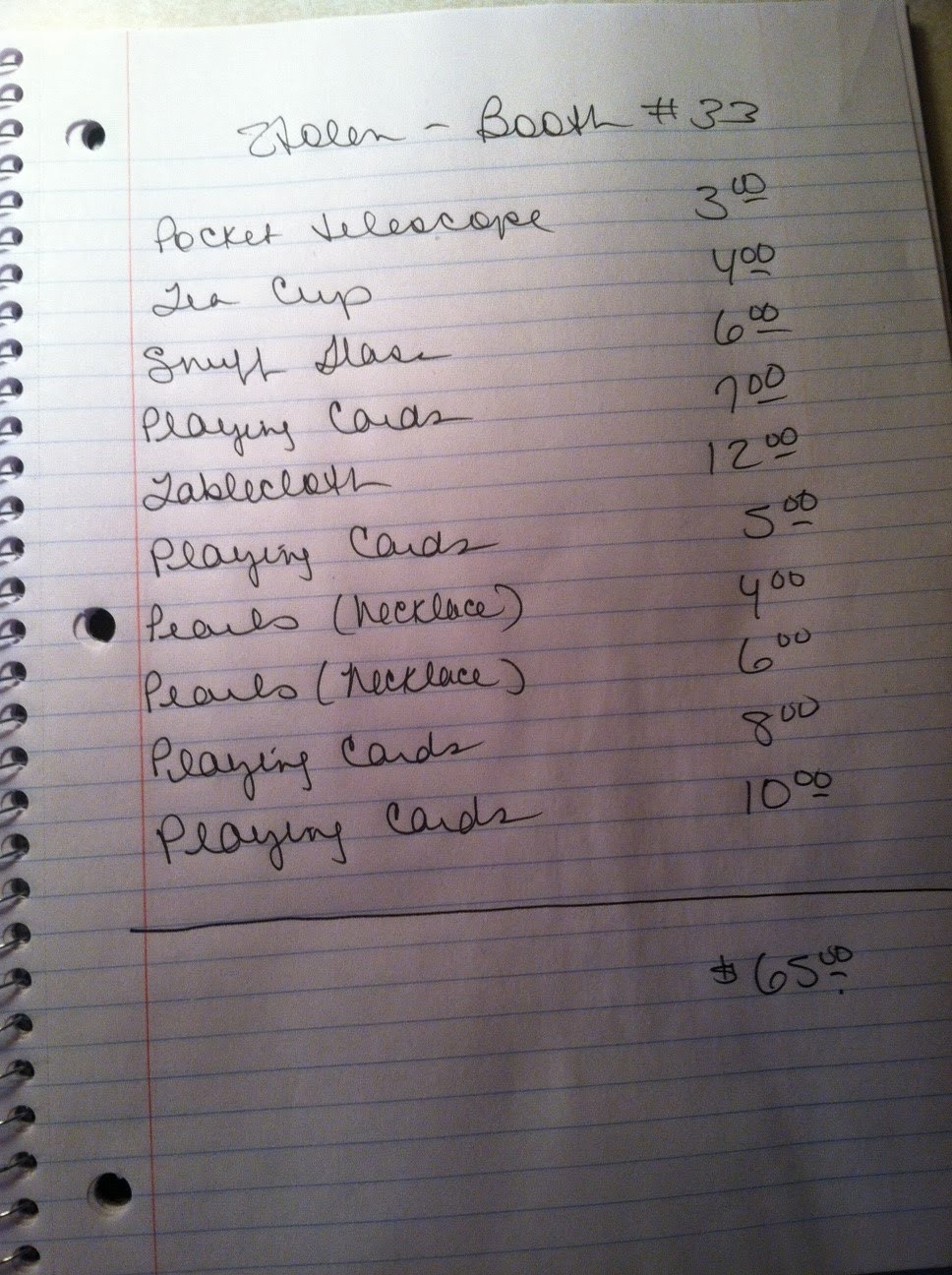 I'm not sure if it was a compliment or not, but TEN of those items were from MY booth!  $65.00 worth of junk.  I knew that they had caught her with a bag full, but I didn't know what she had taken.  The police had sent over a list of booth numbers, so I knew I was missing something.  I wasn't expecting it to be that many items or that much money, I know that!  Now the items are being held as evidence and they won't be returned until the court hearing.  But, at least I will get it back and it will still be good to sell.  When I worked at the grocery store people would steal cigarettes, meat and medicines and then the Police would hold it as evidence and return it all out of date and not good for anything but the trash.  (They did dump the meat and just keep the packages, in case horrible gross things are going through your mind.) 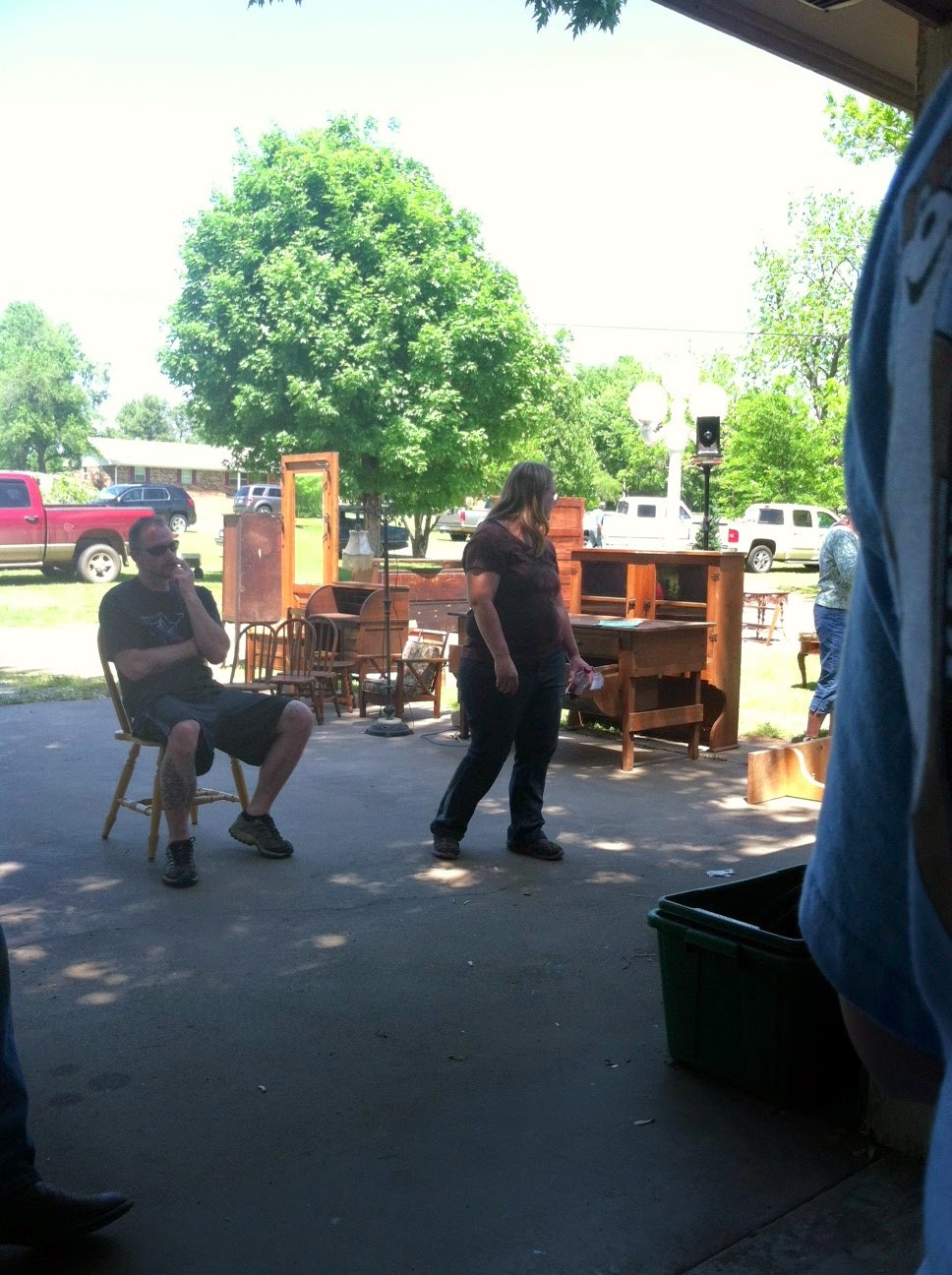 I stumbled upon an auction today.  I just saw the sign and ended up stopping for about three hours.  I knew almost everyone there, which was weird.  I forget how long I have lived in this tiny town.  One of my friends was there, so we hung around together.  I found out tonight that it was her very first auction!

There was a ton of gorgeous solid oak furniture, pie safes, loads of old collectible dolls and tons of other very nice things.  Things sold for a ton, but then again, it really was a deal.  I'm just too poor/cheap to buy furniture.  But some of that stuff was amazing and sold for not much at all. 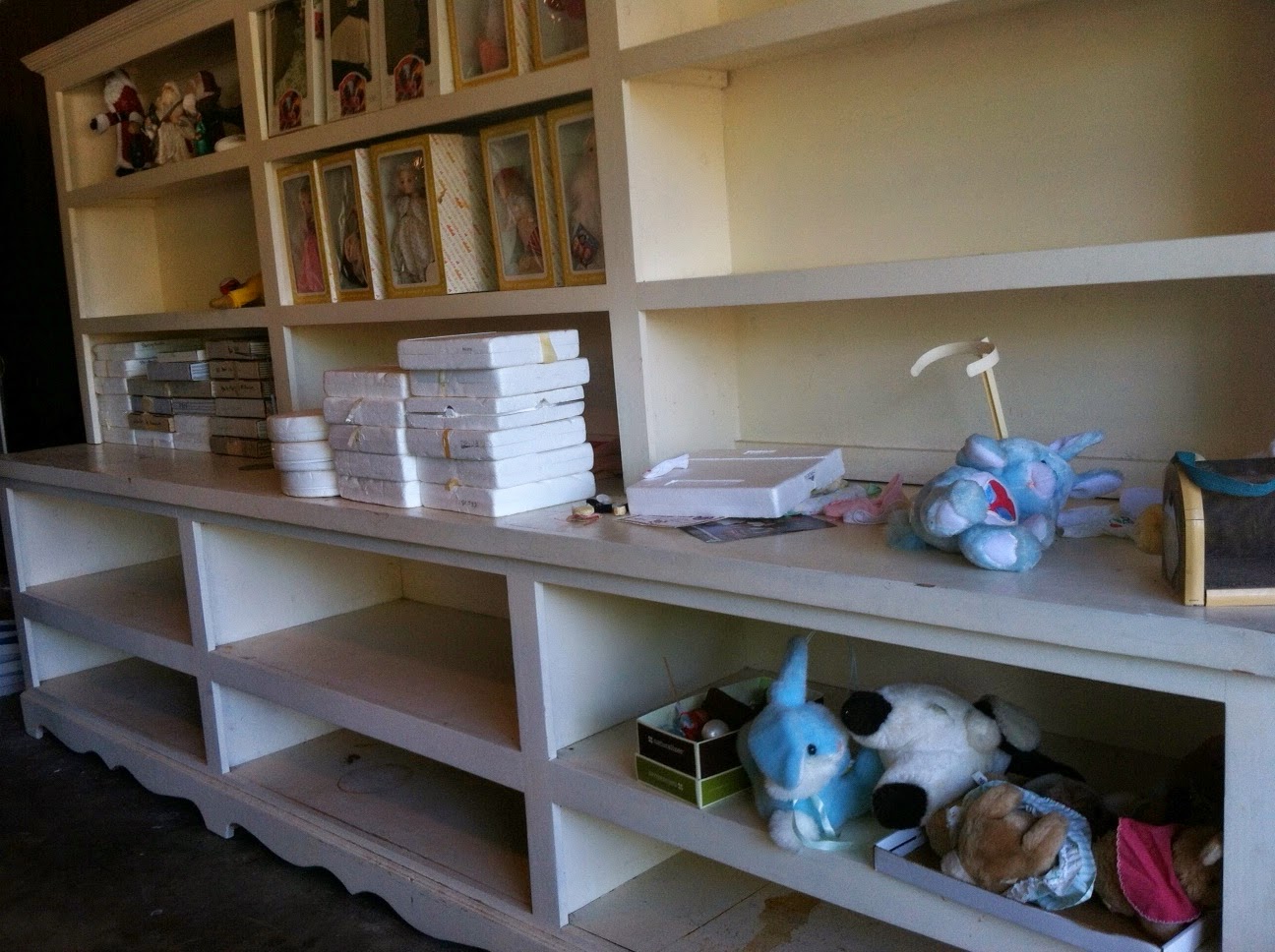 This white cabinet was out in the garage.  It was that about fifteen feet long and seven feet tall.  It must have been in a department store at one time.  It was white and really amazing.  I kept envisioning that center section cut out with a big screen in the middle and then pottery-palooza on the shelves around it.  It only sold for $40.00.  I about threw up.  I bet you could have sold it for $1,000.00 to a store.  Gah!  Granted you would have had to go rent a truck to get it home, but man, what a deal.  When they were auctioning off all the dolls and collector plates, this older man beside me did a huge expel of air out of his mouth and said, "Come ON" under is breath.  I said, "That's how the ladies feel when they auction off tools!"  He looked at me and for a minute, I thought he might hit me.  But, then he laughed and said, "I guess you're right.  Maybe I'll just go get some air." 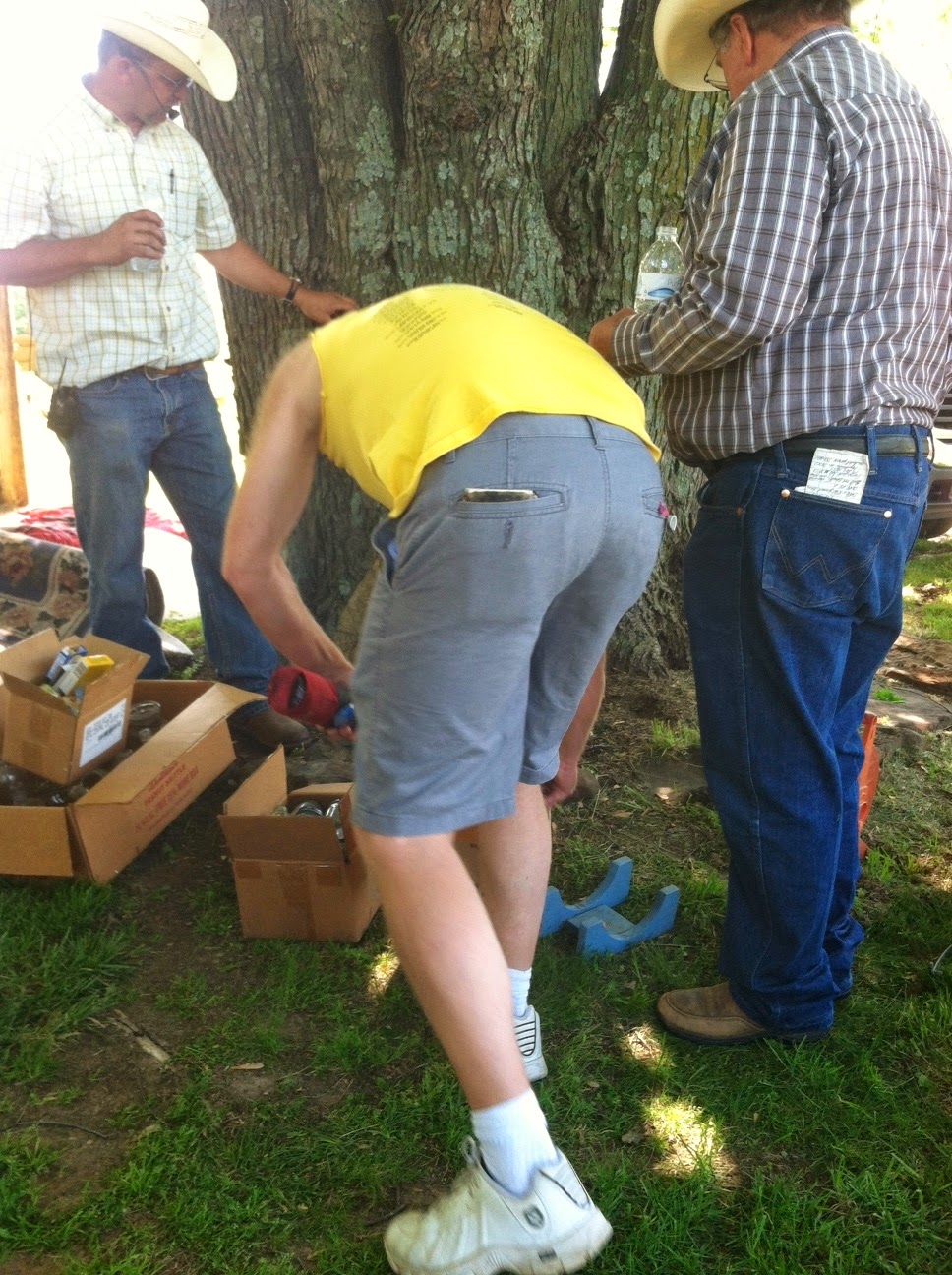 This guy in the yellow kept bidding on and winning almost everything.  I know he must have spent several thousand dollars on furniture and things.  Here he was the high bidder of choice on a bunch of boxes full of old jars.  The bid was $12.00 and he ended up taking all of them.  There was a big box of old played with, but still fun vintage, toys that I wanted.  I was only going to go to $8.00, but I ended up going to $20.00 because I knew he was going to outbid me anyway.  And he did.  When my friend and I were leaving, we asked him if he had a shop somewhere.  He told us that he had lost everything but the shirt off his back in a fire a year ago and he was trying to replace it all.  Then I felt kind of bad about the bidding.  But, then again, that was a box of old junky toys - not furniture or appliances.  So, I guess I don't feel that bad.

I ended up bringing home a carload, but two boxes went to Goodwill and one big bag went in the trash.  I had a questionable moment of bidding where I bought a Cabbage Patch Doll and some Eden Beatrix Potter stuffed bunnies.  I got them cheap, but I don't know why I really bought them. 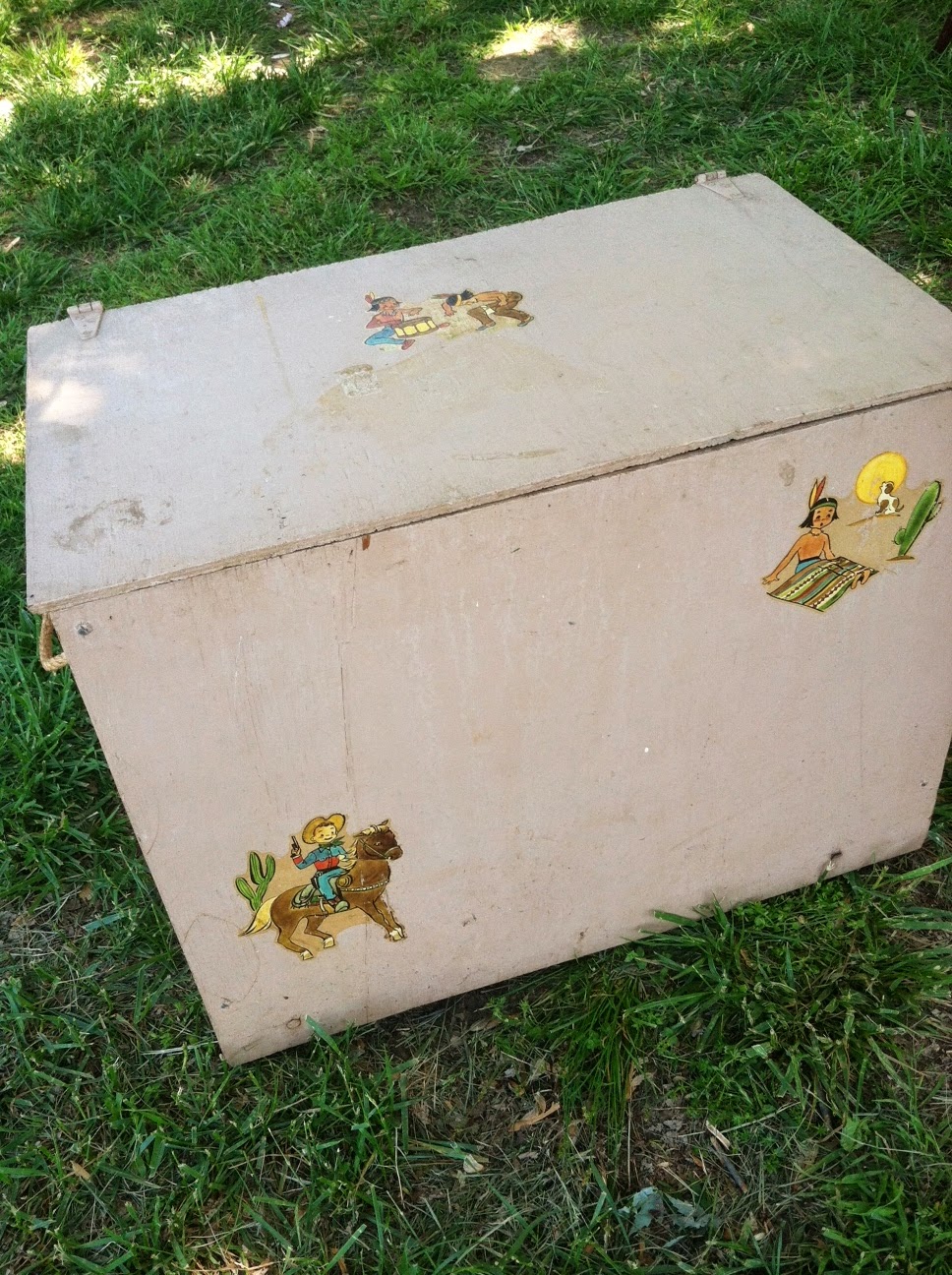 I got this old toy box for $3.00.  I loved the old cowboy decals on it and the fact that it is pink.  I will clean it up and use it in the booth or take it to the Barn Sale.  There were about nine old baseballs in it too - really old ones that are all brown.  I can sell those for a couple bucks each too. 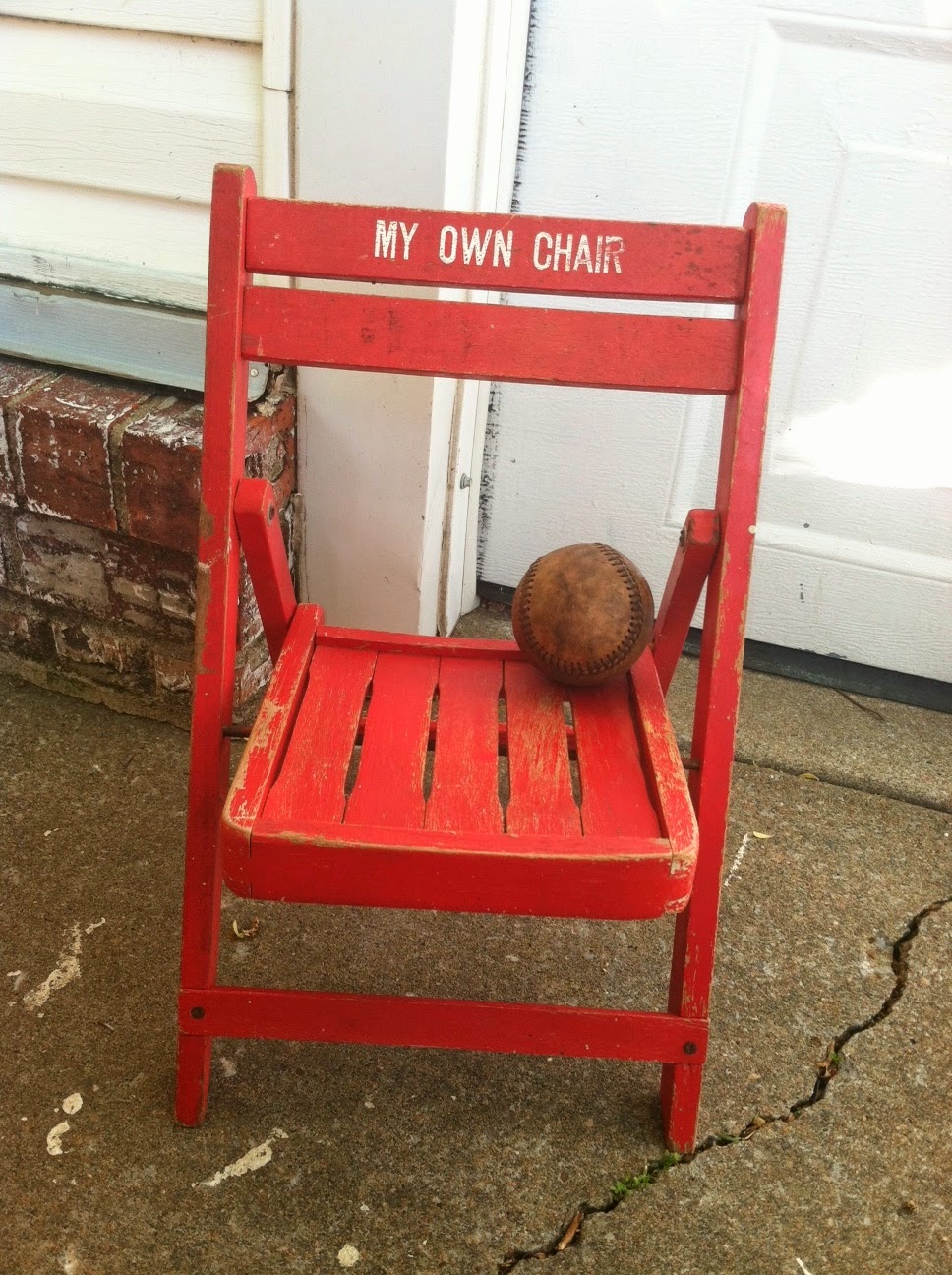 This little chair was the one thing that I really, really wanted.  And, I don't know why - I have no real use for it.  But, golly, it is adorable.  It is about two feet tall and folds up.  I got caught up in a bidding frenzy and paid $15.00 for it - which really was too much.  But, I got it and I love it and I will say it is my Mother's Day gift to myself.  Thats one of the old baseballs there in the seat for scale.

Around to the side of the house there was a bunch of old junk out of the shed.  I didn't take any photos, but for $1.00 a "lot" I got a box full of old trampoline springs, a big bushel basket full of old letters and a old wooden box full of glass gallon jars.  The letters all have have nail holes in them and were taken off a sign of some sort.  I'll have to sort them out and we'll see if we can figure out what it used to say.  I really only wanted the wooden box, but the glass jars are good too.  Lastly the trampoline springs - I saw "cat tails" made out of them for the garden.  Now, will I actually use all these things and complete these projects - WHO KNOWS!

My last item is actually my very favorite and guess what?  I found it in the trash pile! 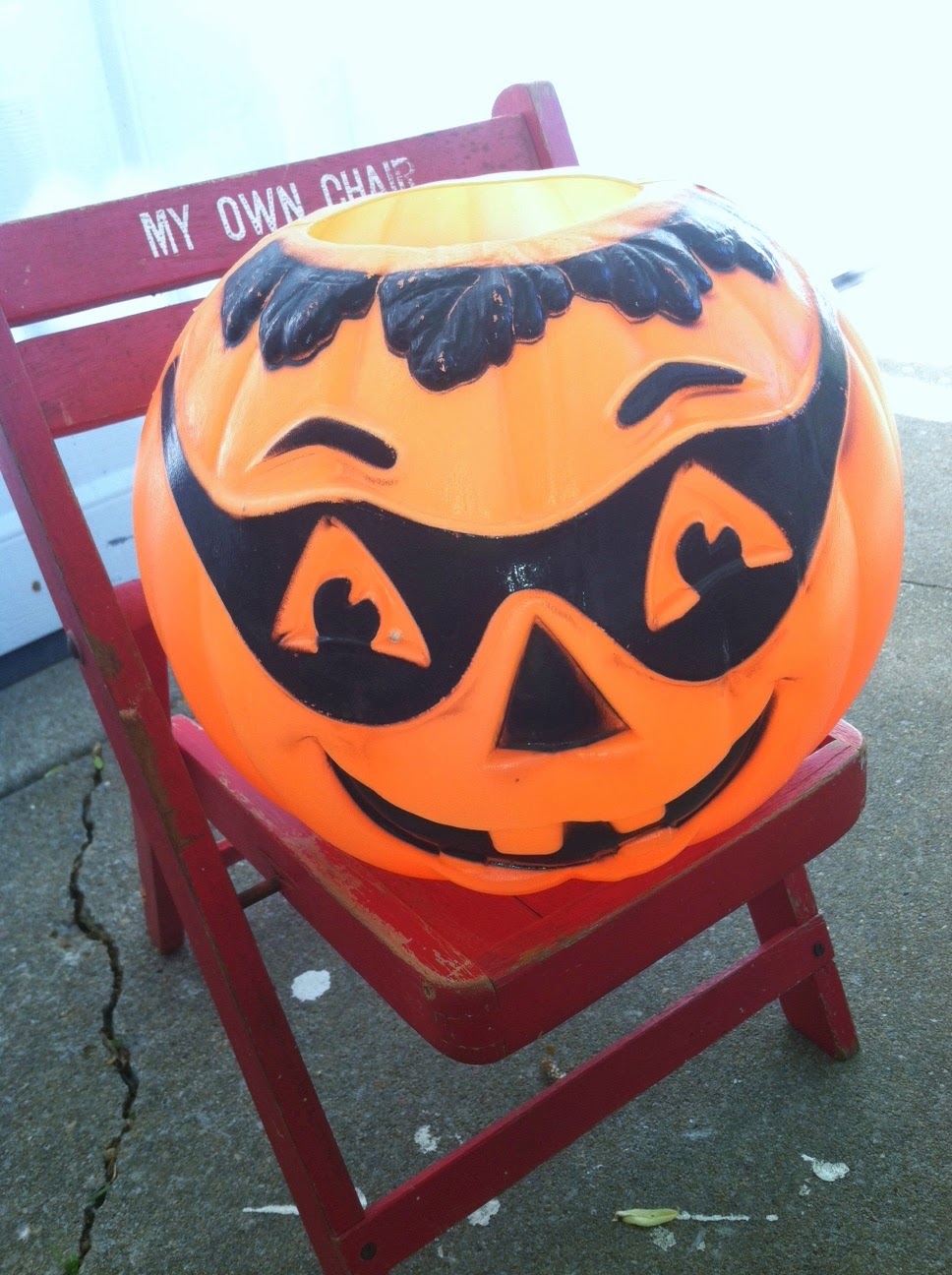 I thought it was just a run of the mill Trick or Treat pail, but I it looked a bit big so I picked it up.  When I saw that masked face I knew I had struck gold!  Such a happy find.  Literally - a find!

I had a good afternoon of people watching and junk buying.  It was a fun day!
Posted by Shara at 11:28 PM