Today was the big NWA Largest Yard Sale out at the Fairgrounds.  I don't know who ran this, but they did a really good job.  The advertising was everywhere - full page ads, road signs, billboards, Craigslist and Facebook.  I would guess there were at least 200 Vendors set up inside and outside.  There was a mix from really yard sale junk to vintage items and antiques.  There were new things too like Longaberger, Avon and Thirty one.  I imagine it was like most of the flea markets and swap meets that I know a lot of areas have once a month.  We just don't have things like this ever.  So, it was fun.

I got there about 11:00, which I KNOW is a disgrace to anyone that calls themselves a die-hard yard saler. But, I have an excuse.  I have been sick.  Luckily I only got the woman-flu so everything still got done around here.   I haven't left the house all week, so this was my first attempt to even get dressed all week.  But, I wasn't about to miss this sale!  You know Lara - she was an early Bird in line at 6:00!  I don't know what she got yet - but I know she was out of money at 7:15 - so she must have found some great stuff!

Admission was $3.00 a head, but someone handed us both extra wristbands when we walked up, so we didn't have to pay.  Thanks strangers!  That gave us an extra $6.00 to spend.  :) And when we left, a nice lady loaded us up on a golf cart and took us to the car.  Hey - maybe I looked sick!  I hadn't thought of that - poor Shara got herself pity wristbands and a pity ride!  Heck, I'll take it!

So here is where I should post a million photos, but I didn't take a single one.  It was so crowded that you could barely get up to the tables inside buildings.  And, forgive me for this, I know I will sound HORRIBLE, but I swear I got behind every little old lady pushing a Rollerator at the entire sale.  Poke, poke, poke.  Yes, I understand the irony because I will be one of those ladies pushing a Rollerator when I am old - I will be yard saling long after I should have given it up! 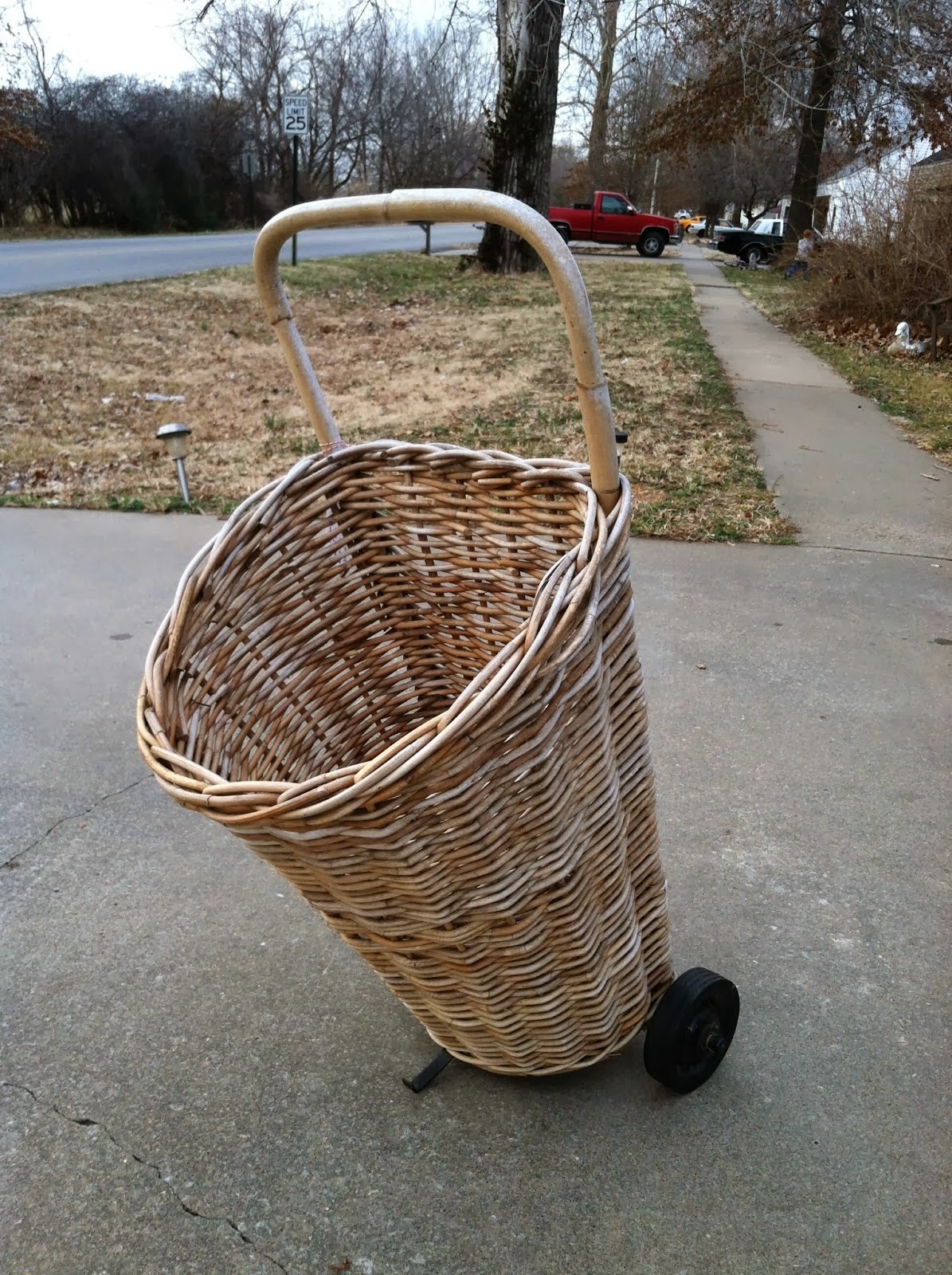 I also took my French Market basket and people either had to come over and asked me where I got it and fawn over it OR they had to *sigh* and give it a dirty look for pushing it in their way.  Hellooooo - I saw five different DOGS in STROLLERS that took up twice the space my basket took.  DOGS!

I did manage to find a few things.  You guessed that, right? 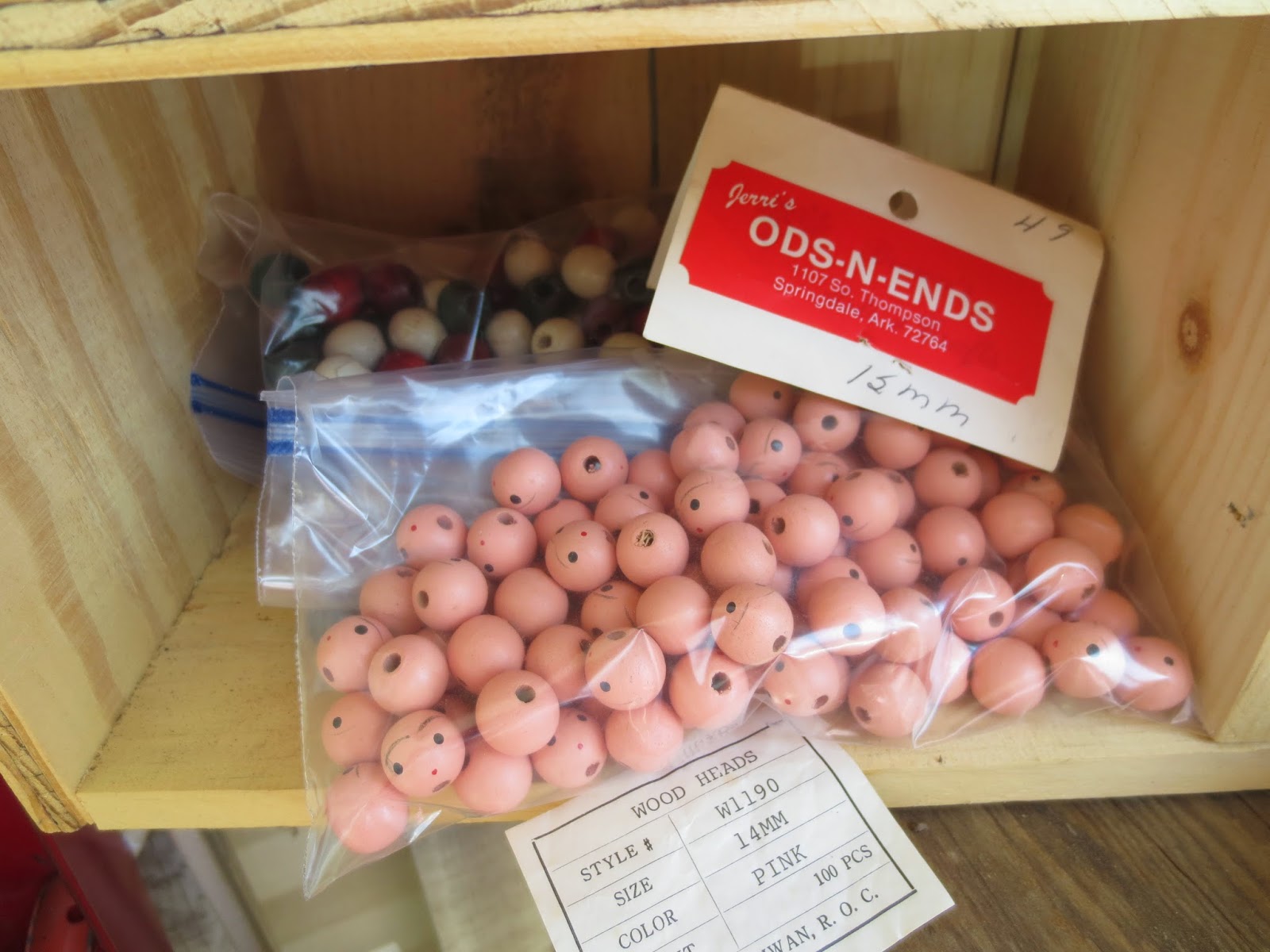 My first purchase was a long strand of red, white and green beads from a Christmas tree.  I take those apart and use them to make beaded dolls.  The next booth brought me a new old stock baggie of 100 wooden heads.  Exactly what I use to make beaded dolls! 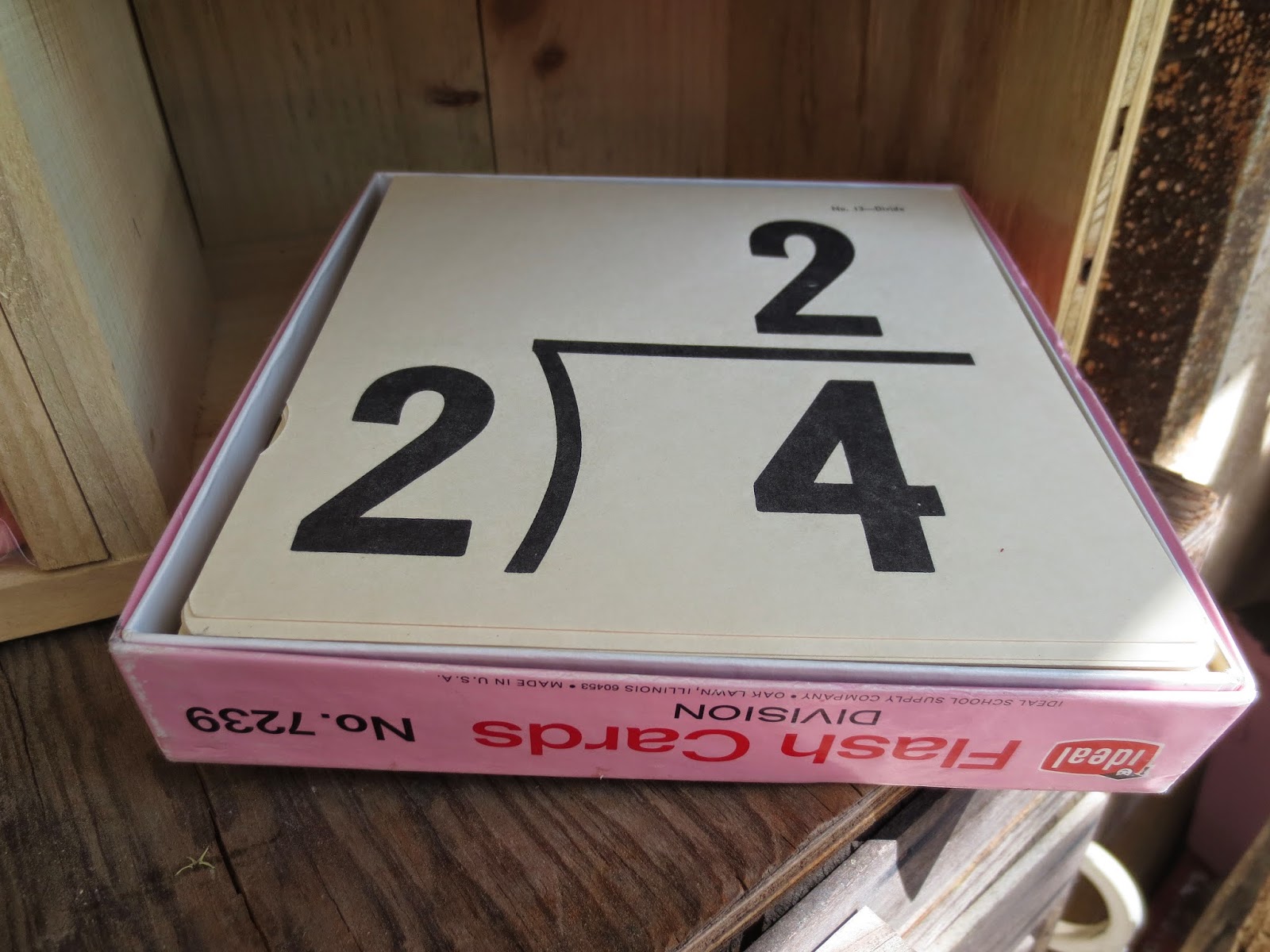 A neat old box of Flash Cards.  I bought two other boxes, but they aren't old like these.  The man told me that he, his wife, his parents and her parents had all been teachers for over 40 years each.  That made me wonder what other cool old school stuff I had missed.....especially when he only charged me 25¢ an item. 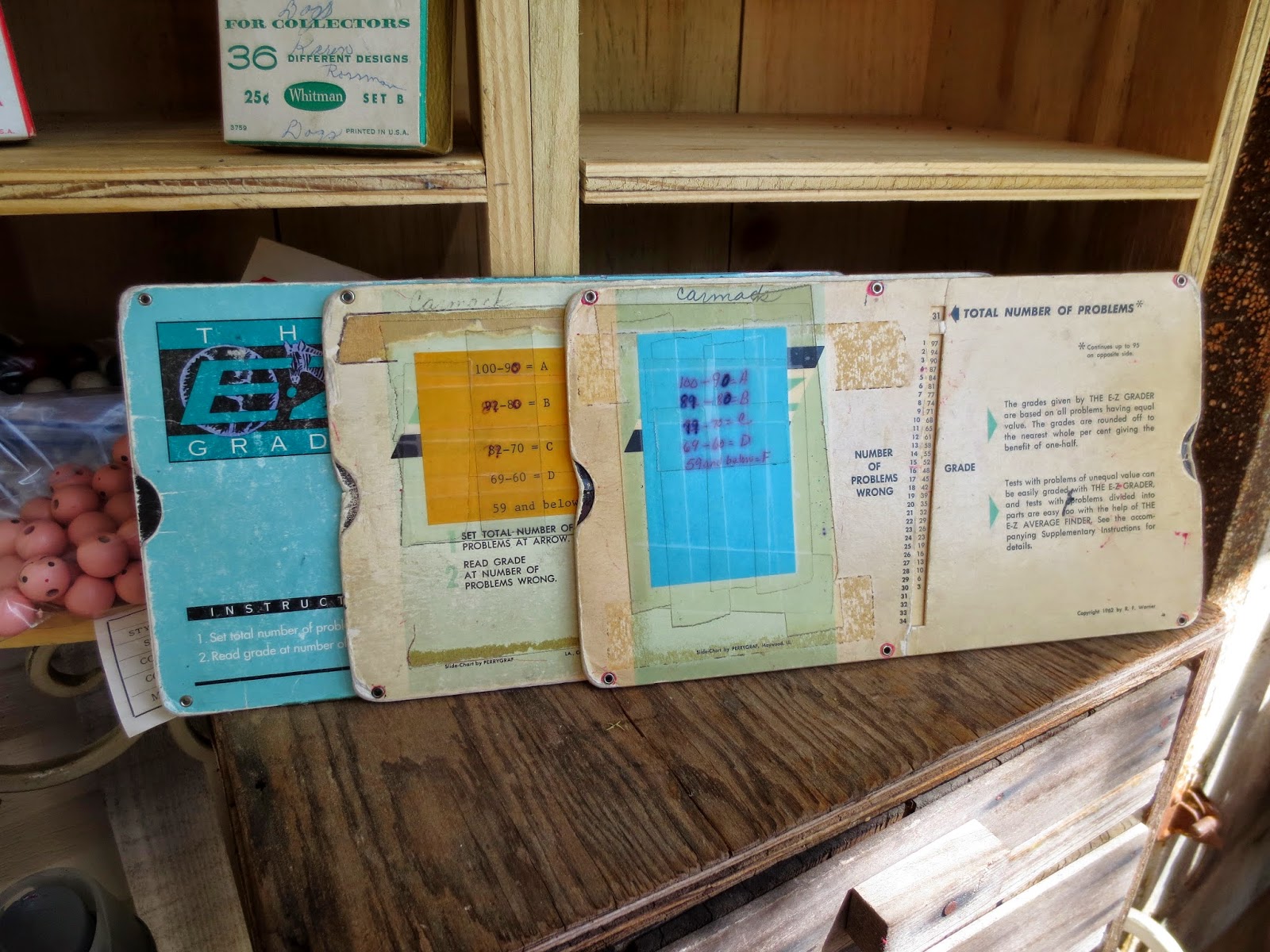 He let me have these three old graders for 25¢ total.  I don't know why I bought them, but when I saw them, I remembered different teachers letting me help grade papers and I had to use one of these to figure up the percentage.  I was usually the Teacher's Pet.  I don't know why though. 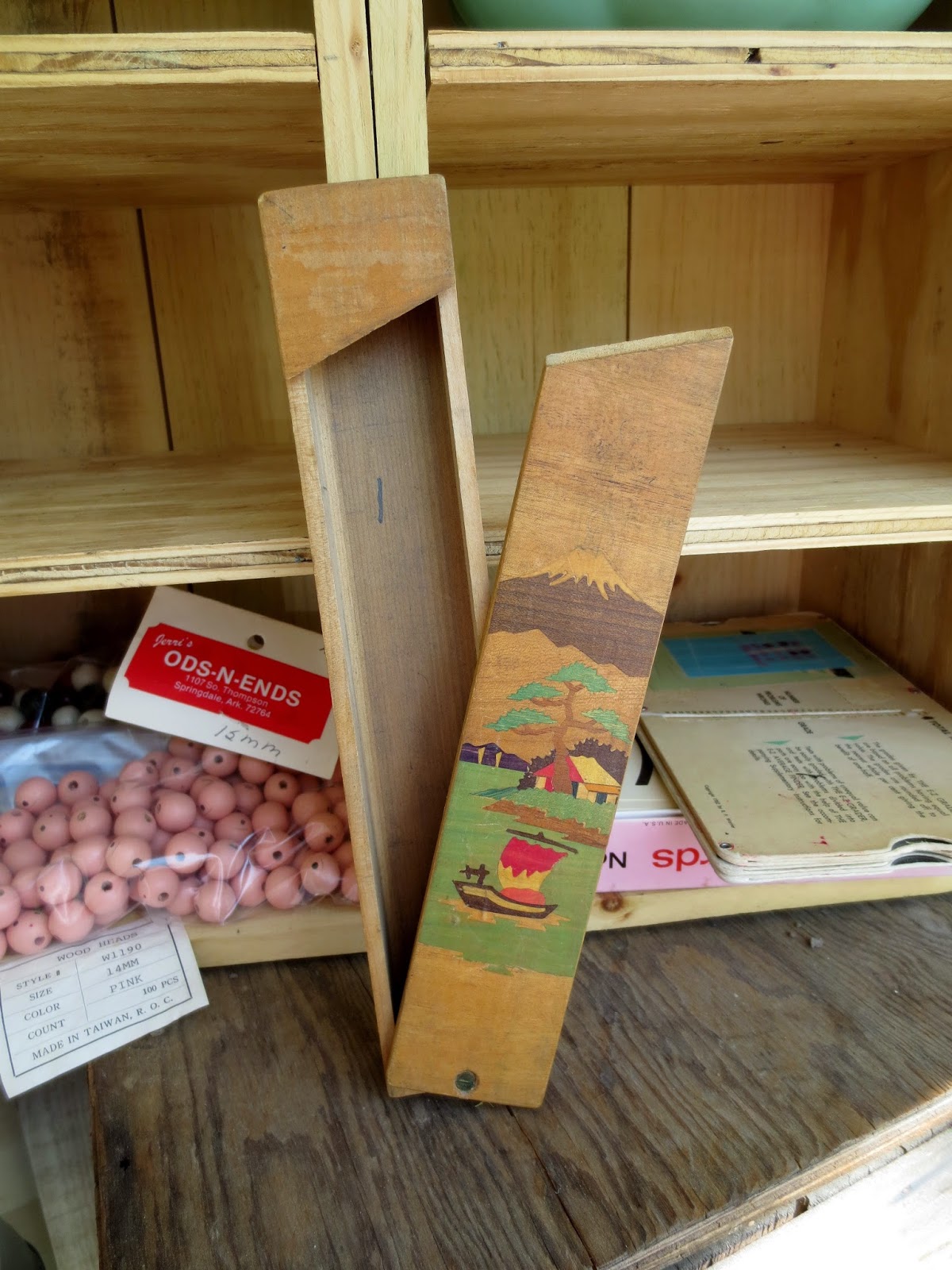 One of the thrift stores had a booth set up and it was real bonafide crap.  I did find this neat old hand-painted box for $1.00, so I bought it.  I think it is a pencil box? 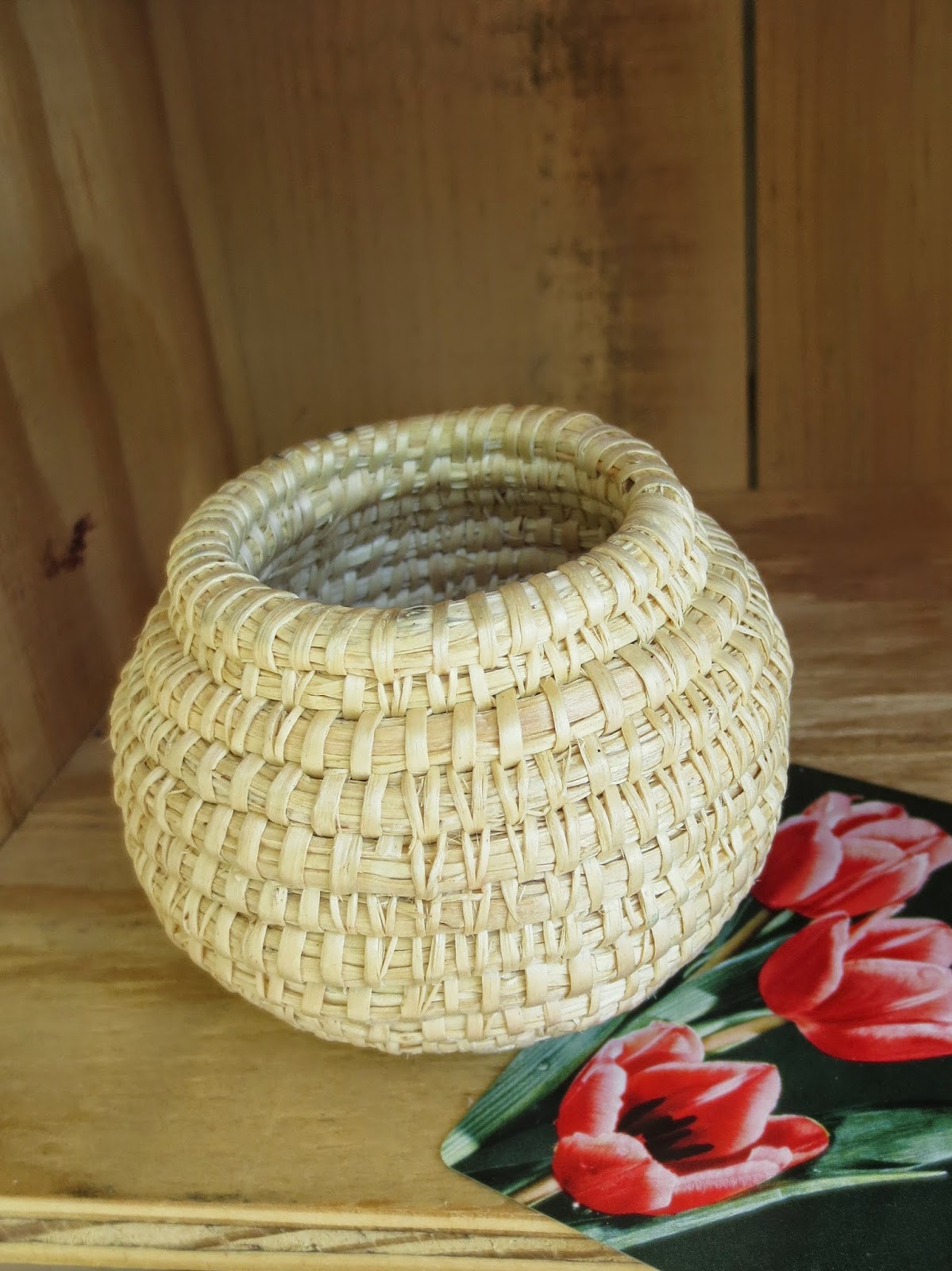 I reached under a table and pulled out a box full of linens in one booth.  The lady said, "Oh, I forgot I had those - thank you!"  There weren't any linens in the box that I wanted, but this nice handmade sweetgrass basket was at the bottom.  She let me have it for half what it was marked since I found her linens.  That's a playing card beside it for scale.  I love finding little baskets. 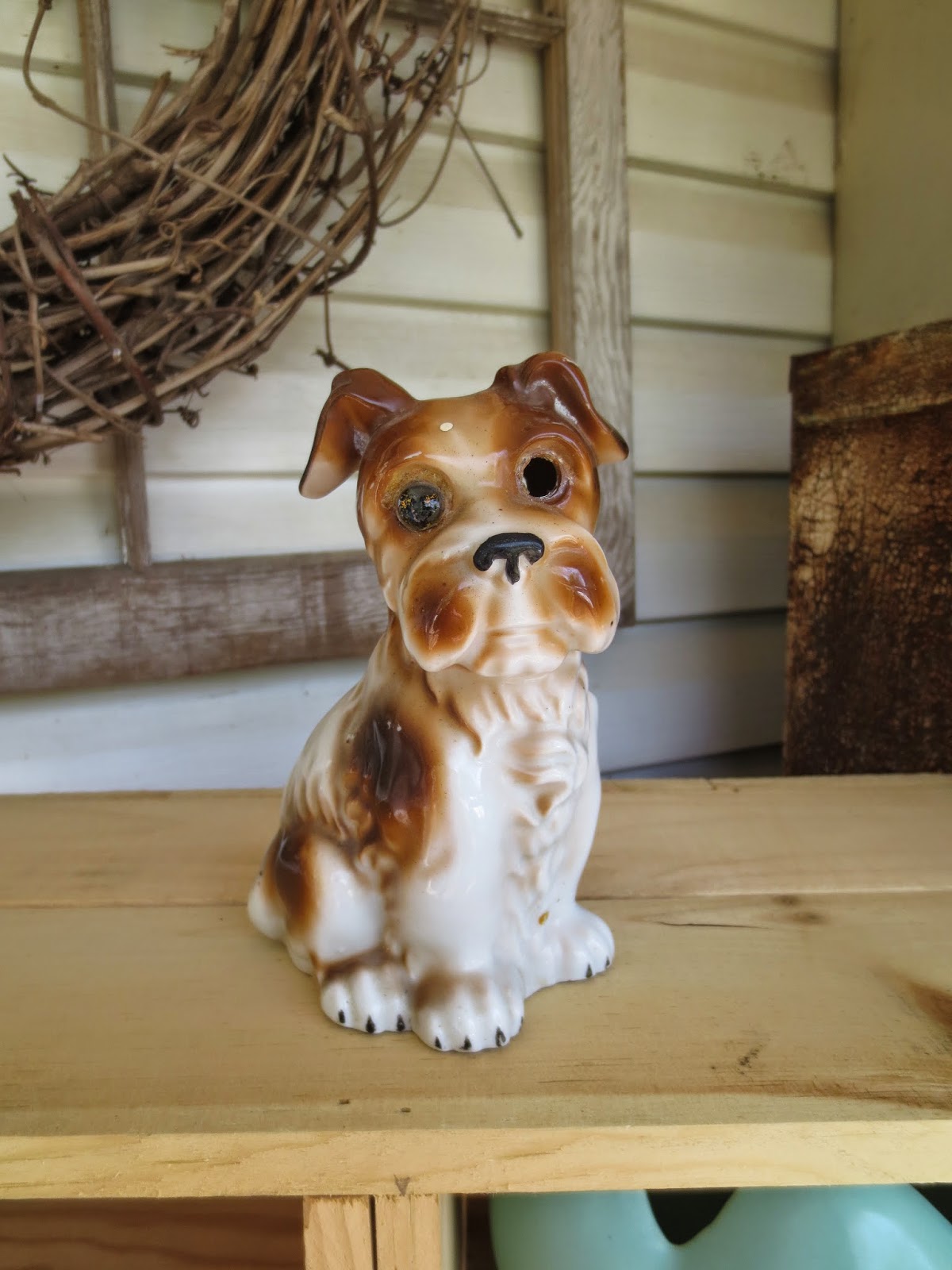 This pitiful dog was too cute to leave behind and especially for 50¢.  He's missing an eye in the photo, but I have it and I already fixed it. 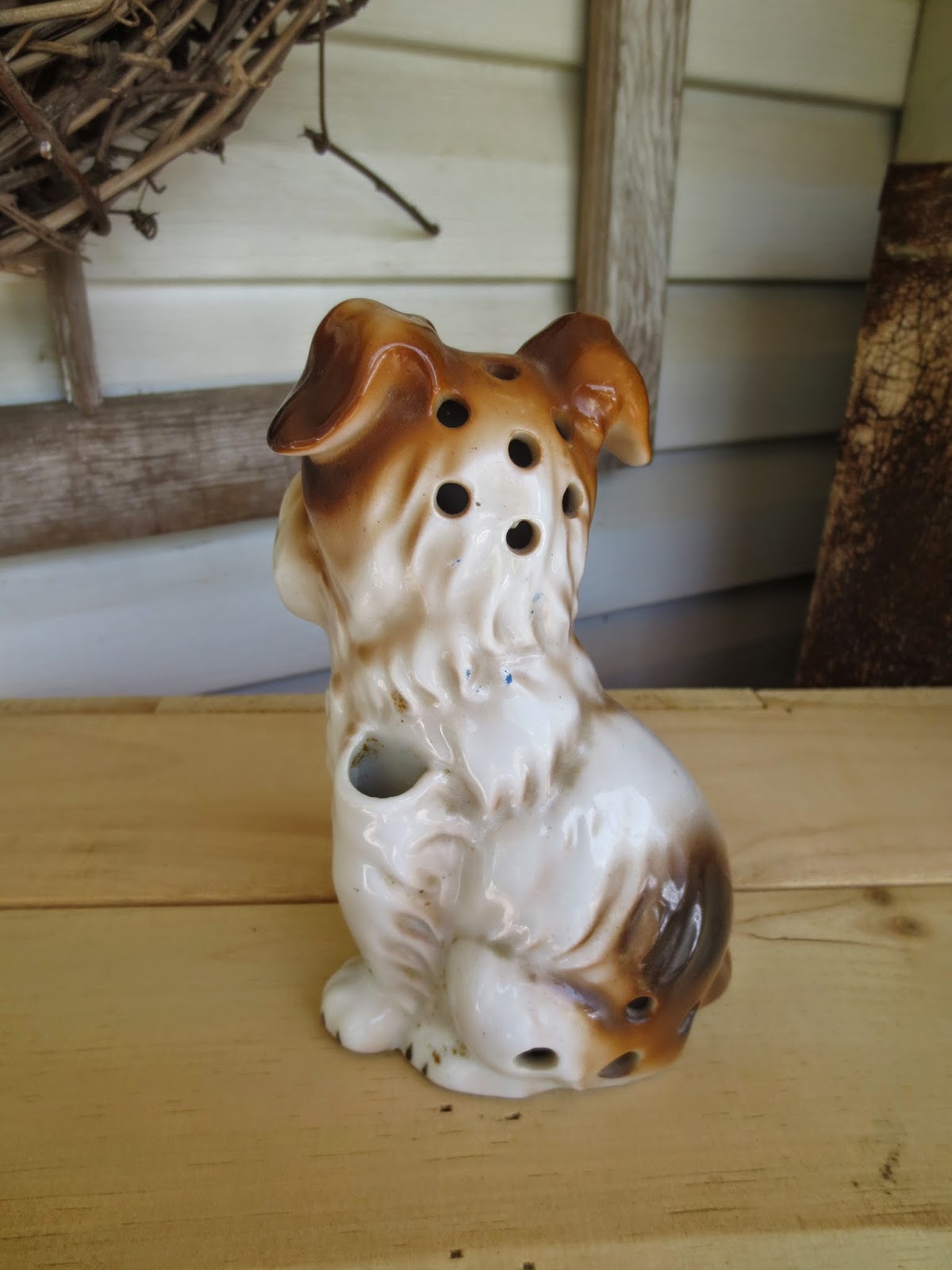 He has a purpose in life, but what it is I don't know.  Maybe a toothbrush holder?  But that would only hold one.  Hmmmm.  Those holes top and bottom are odd too.  Ideas? 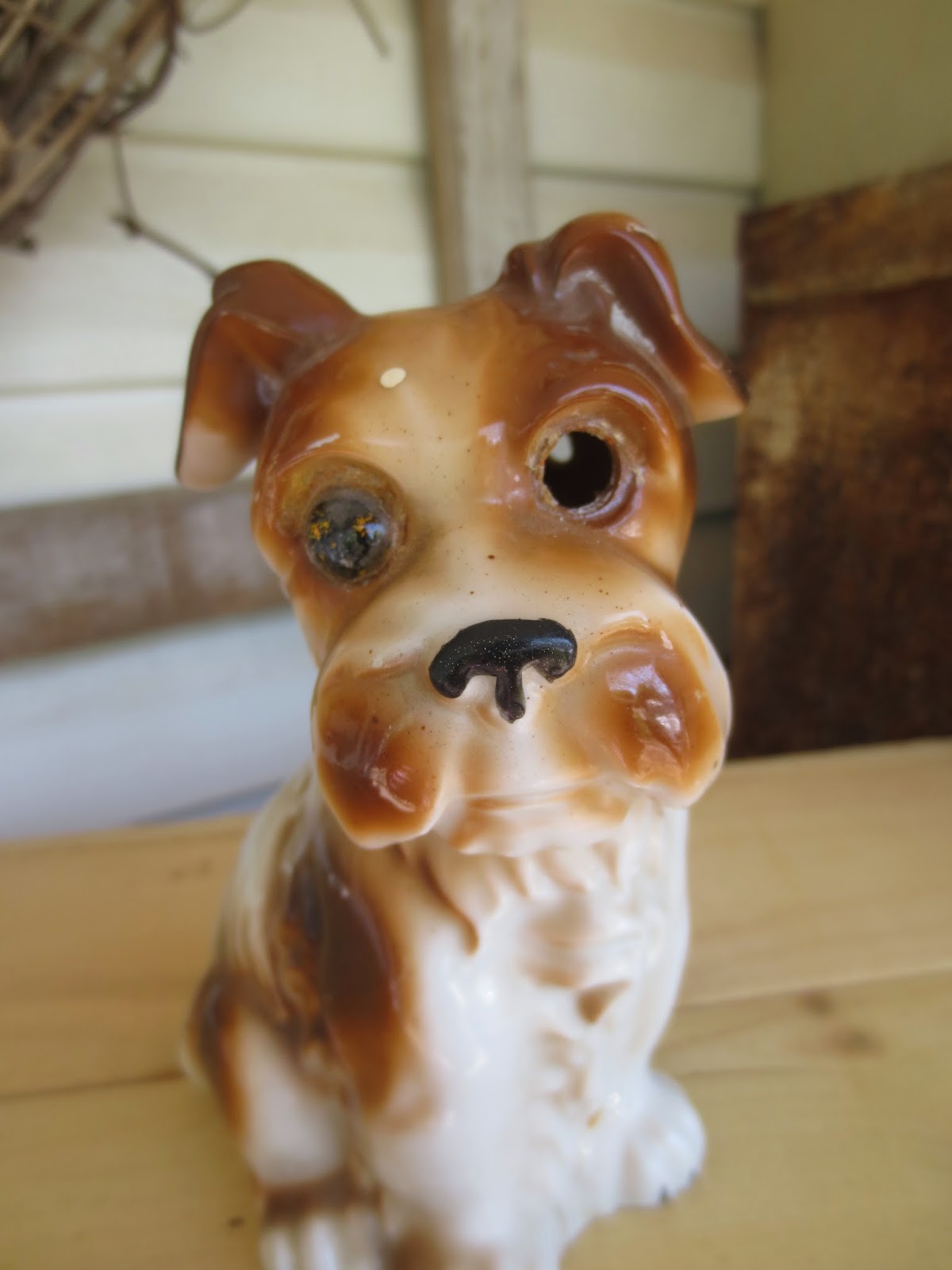 He's pretty cute - even more so now that he has two working eyeballs.  :) 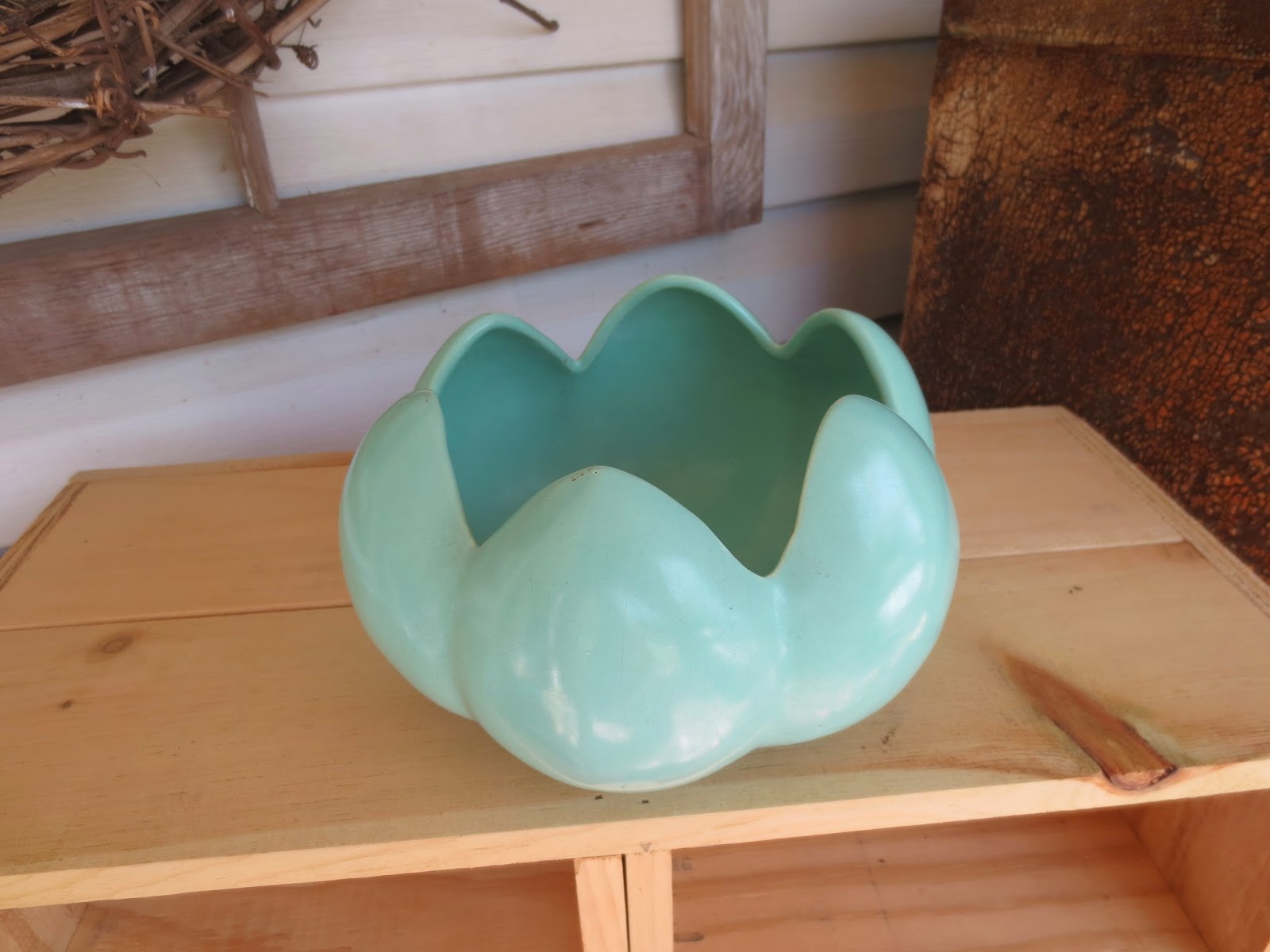 I saw a lot of pottery.  But, most was out of my price range or not my style.  This is the only one that had to come home with me.  It has that cold touch to the pottery so it's old and just the loveliest color. 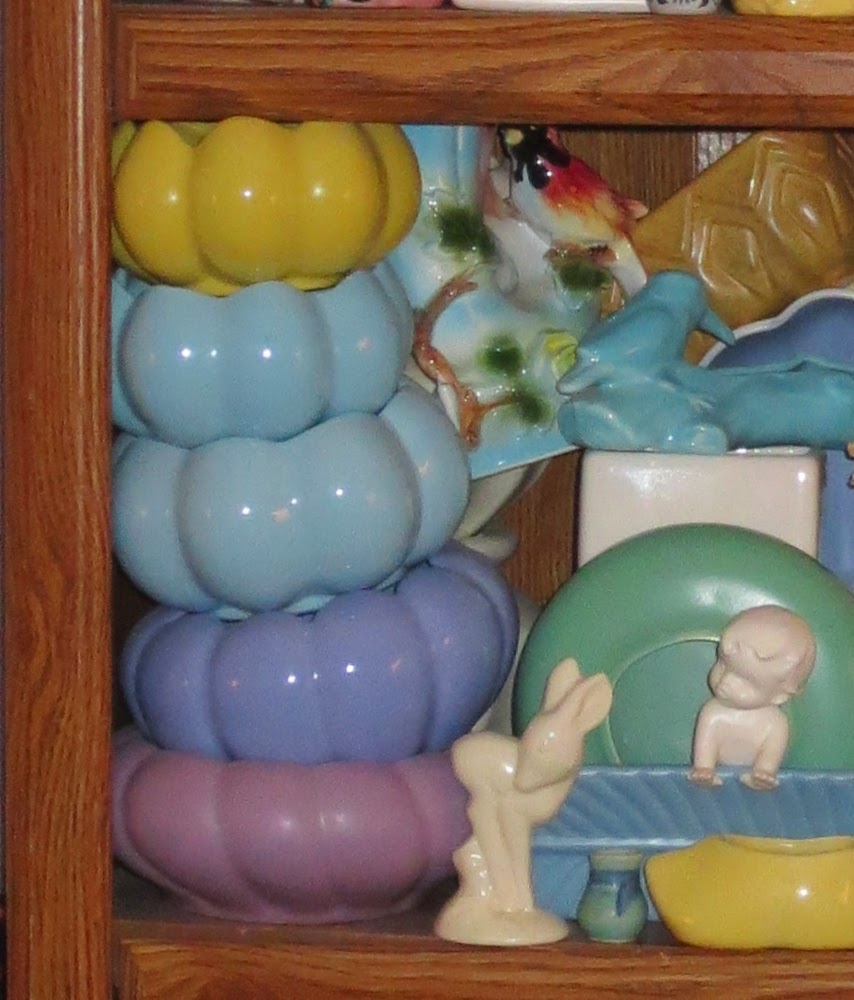 I have a few others in this style already. 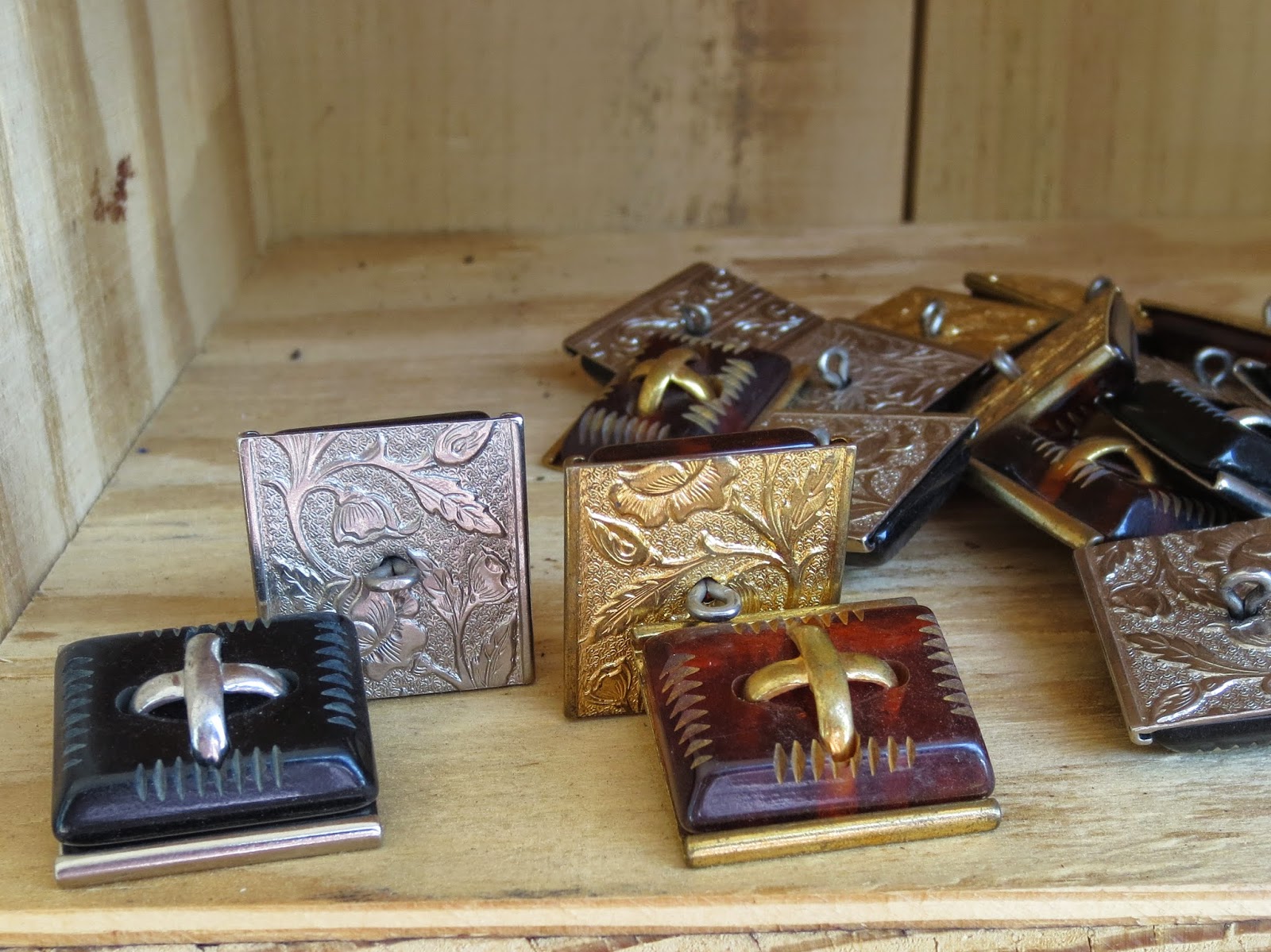 These buttons were 10¢ each.  There are black on silver and amber on gold.  I think the backs are almost prettier than the fronts! 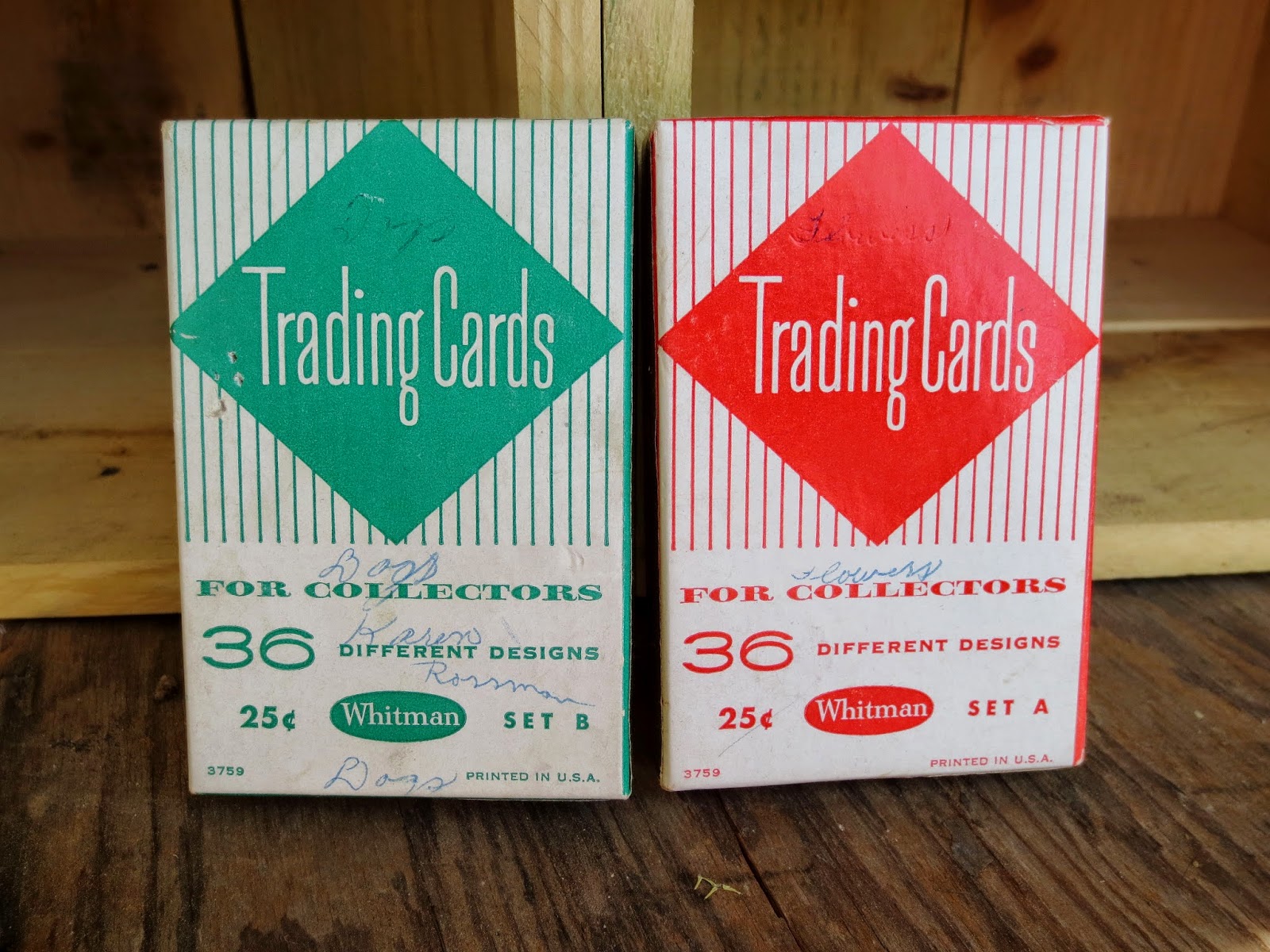 I bought these card packs not really realizing what they were until I got them home.  I paid $2.00 for the two boxes.  The same man had six more boxes sitting beside these, rubber-banded together for $22.00.  I paid $1.00 a box for these two so I don't know what his logic was - he told me that he couldn't think of any reason anyone would really even want them.  That's when I should have piped up and offered him a $1.00 a box when he said that.  DANG IT cold medications why do you make my brain so dumb?

What was inside to make me all giddy?  Well, they are playing card trading packs - one each of all different types of playing cards.  Apparently people used to trade them - or maybe kids did.  They are blank on the backs and do not have the card faces on them.  I only pulled out a few to show you - I like to take my time and look at wonderful things like this later when I am done with my chores and can take the time to enjoy it. 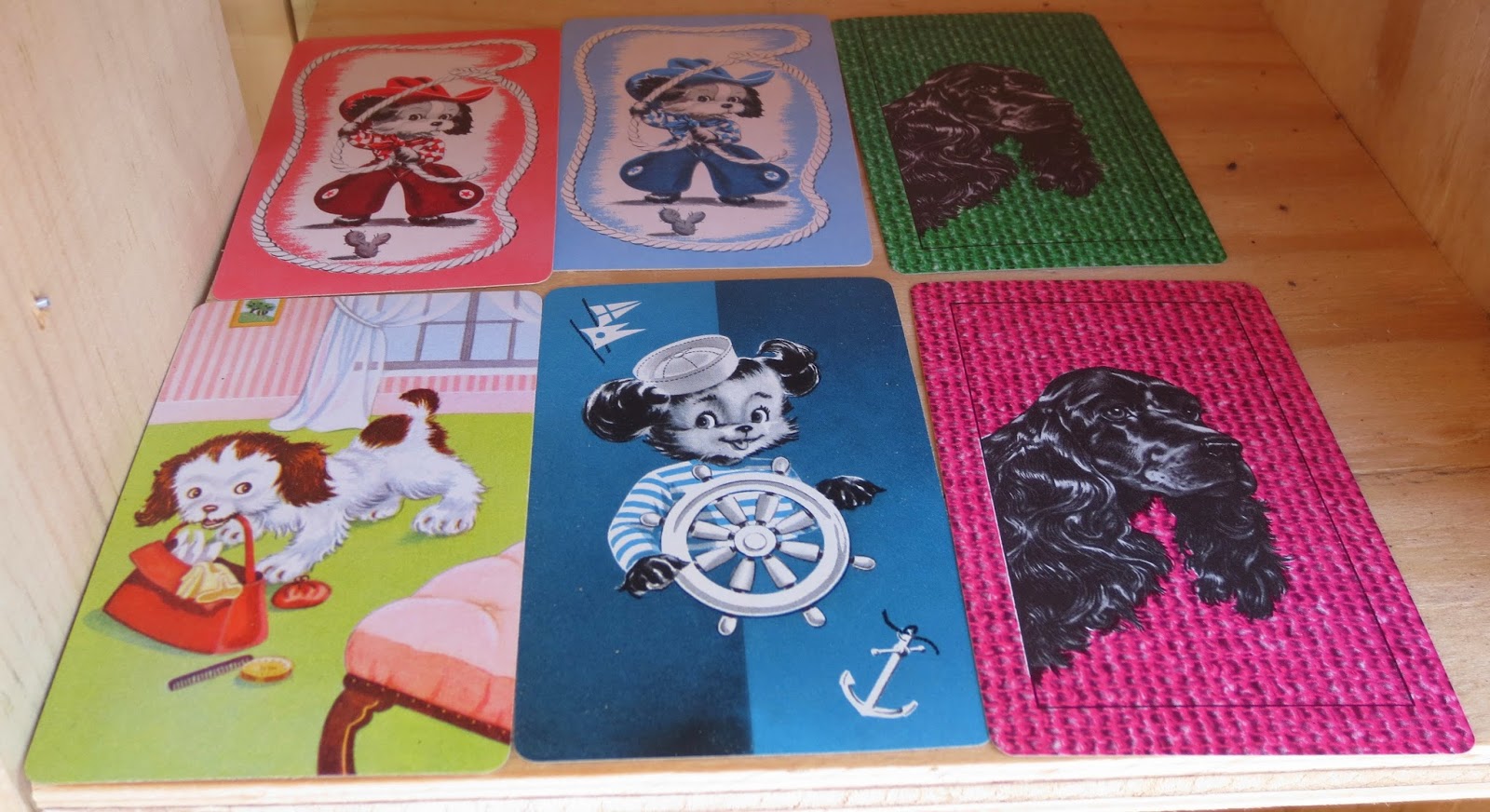 One box is all dogs.  SUPER cute, adorable dogs.

SO CUTE.
(Really the dogs on the plaid cards will eat your face off, but I don't want them to hear me say that, okay?)
AREN'T THEY CUTE?

The second box is all flowers.  I'm not usually a flowery person.
But these are AWESOME.

Hey Mister, if you are reading this, send me those other six boxes of cards right.now, OKEY DOKEY?

So, that is my day that the NWA's Largest Yard Sale.

We now resume our regular schedule of Muscinex, Robitussin and Alka Seltzer Cold.