It Was A Good Day

On Saturdays, The Bean still has his Saturday morning sleep late, eat cereal and watch TV routine (who wouldn't want to still have that life, right?) and The Breadman has a nap and/or watches some sort of a sporting event involving a ball.  Since they are "busy" I usually head towards the booth to straighten it up and hit the Super Cheap Thrift along the way.  Of course, garage sales too if I can find any.  But, yesterday, I implied I was going to the booth (where neither of them want to go or ever do go) and instead went into THE BIG CITY and went thrifting.  I didn't end up finding a lot, but I did enjoy a little bit of ME time. I may or may not have even gone to the old timey greasy drive-thru for an order of hand-cut hand-breaded onion rings and a Vanilla Coke, neither of which I EVER eat and eaten them in the car ALL BY MYSELF.  I did feel a little guilty when the boys announced they had each eaten a nineteen cent packet of Ramen for lunch. Ah, heck, I didn't feel guilty ONE BIT.  :D  (There was a ton of good food in the house, they just like Ramen.) 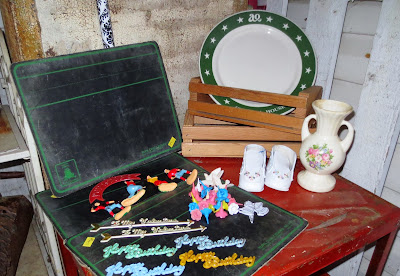 The days loot.  My first stop I almost left empty handed, but then I found the two wooden crates for 50¢ each.  They originally were for holding cassette tapes, but they work to hold about anything. 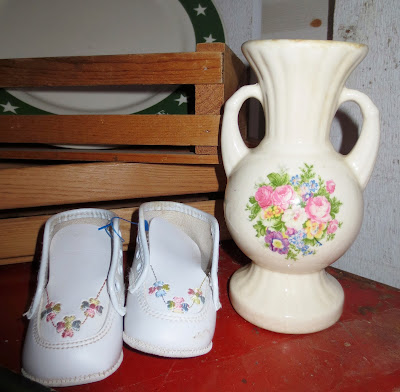 The piece of pottery was 99¢. The little flowery baby shoes were $1.00.  The potter isn't my usual style as I am not a flower person.  More on that in a minute. 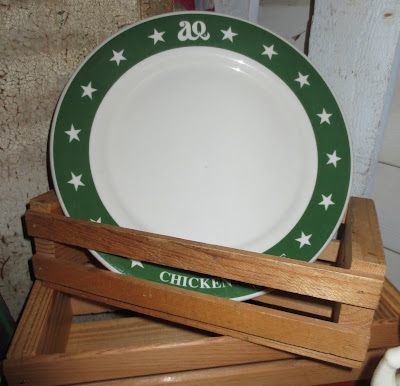 The AQ Chicken House has been located in Springdale, AR since 1947 and it is world famous.  Bill Clinton loves the place.  President Bush ordered food from Air Force one and they landed to pick it up on the way through.  There is a book in the lobby to sign and there are very famous signatures in that book from all over the world to politics to celebrities.  EVEN ME.  This is a Buffalo China plate  - I don't know how old it is, but I think it should be a quick seller in the booth. 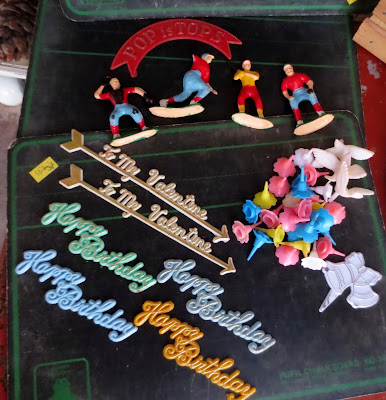 I hesitated for a bit on this big bag of cake decorating things for $1.99, but then I decided to go ahead and get it.  Sometimes I am silly about things.  Thank goodness I came to my senses.  In the bag were all these great old cake toppers, seventeen metal Wilton icing tips and some cake decorating booklets.  I have a special fondness for those sweet "Happy Birthday" toppers.

"Pop is Tops" is a good one too.  Does anyone call their Dad "Pops" anymore?

Those old blackboards in the background are Happy Hoppy Pupil Blackboards for handwriting practice.  I found them at the Salvation Army.  When I was walking in the door, Lara was walking out.  She had a few books and things for the kids, but didn't find much vintage.  I almost didn't go in, but I was happy I did after I found the three blackboards.  I think they surely must have put them out while I was shopping or Lara would have found them first.  If she would have, I would have been as happy for her as she was for me. 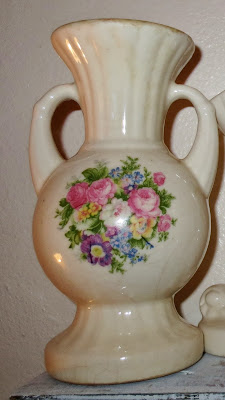 So, about this piece of pottery.  It's matte white and old and really sweet, but I don't usually like flowery type things. 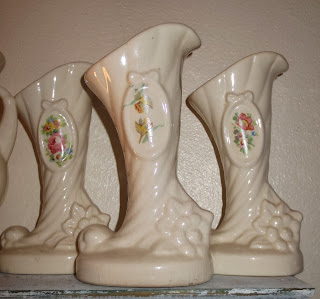 But, one by one, over the past few years, I have found these three mate white vintage vases with flowers on them.  And, I sort of fell in love with them. 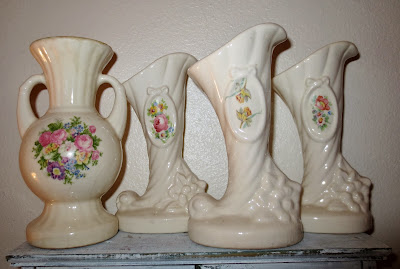 And this one fits right in.  So, now, I apparently collect sweet old flowery vases.
Not that that's a bad thing, necessarily.

The last find which was a really, really good and HAPPY find! 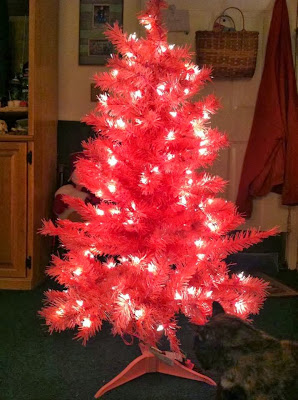 A beautiful PINK tree.  It's not old, it's brand new.  It was in the still sealed Walmart box.  But, it's a lovely shade of pink and pre-lit.  When I set it up and plugged it in, well, it just glowed this lovely pink shimmer.  The best part was it was priced $5.00.  No, wait, the BEST part is that it was 50% off so only $2.50.  I swore I wouldn't put the Valentine's Day stuff out until February 1st, but now I am DYING to put this pink tree out with all my hearts on it.