The Weekend in Junk and a Story

I went out to the booth to straighten up today and hit the Super Cheap Thrift and a few yard sales along the way.  Today was Customer Appreciation Day at the Super Cheap Thrift  - they were having a cookout with hamburgers, hot dogs, chips, cookies and a drink all for FREE.  I didn't partake of any of it, but I thought that was really nice especially considering that the prices in the thrift are SO inexpensive and they give out vouchers and groceries and help people all the time.  Then when I got to the Flea Market for the Anniversary bash, people had brought in a ton of food and goodies.  I ate a couple cake pops and OH MY goodness, they were SO good.  They weren't on sticks, so they were really just big truffles.  Mmmmmmm.  I took Entenmann's donuts poured into a serving bowl and everyone thought I made them.  Who makes a hundred tiny powdered donuts?

On to the junk of the day.  And a story.  There's always a story.

I followed great big giant signs that touted a HUGE sale.  When I got to the address, there wasn't a sign, but I could see some things in the garage.  Most of it looked like Christmas stuff, so i decided to stop even though it didn't look too promising.  When I got into the garage - it was all Christmas - every single thing.  And, a lot of it was vintage.  Some of it wasn't the best quality or things that I like, but a lot of it was. 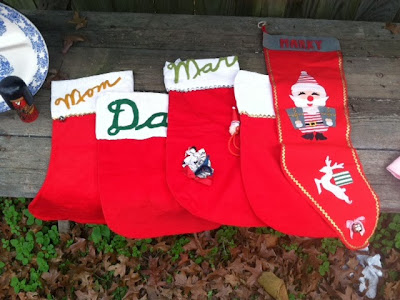 Handmade corduroy stockings - Mom, Dad, Mary and a blank one.  The one on the end says MARKY which is a funny cute name. 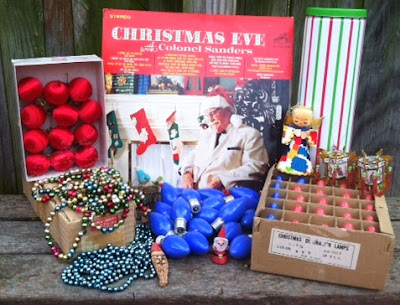 A box of smaller satin covered ornaments for crafting, a handful of vintage ornaments, a tall tin, a case of pink and blue ornaments and a handful of extra blue ones too.  The glass garland - in it's original box, was the first thing I spotted.  My heart fluttered - I do love that stuff SO much.  $1.50 netted a long strand of turquoise and a long strand of variegated colored beads along with a bunch of cheap plastic beaded garland that went to the wayside. 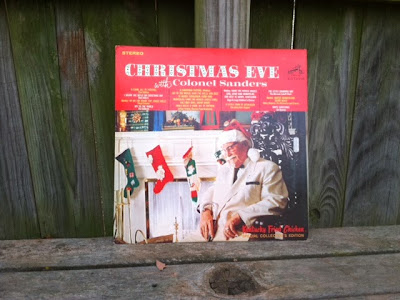 There was a big box of all Christmas albums.  I flipped through them and knew I HAD to buy this one - Christmas Eve with Colonel Sanders.  (Shhh- I think he's asleep!)

As I was looking through the albums, I noticed the same name on the back of each on - Gring.  It was a name that I remembered from my childhood that I hadn't heard very many times in my life.  When I was paying, I told the older lady having the sale that I knew some people with that same last name.  She said that she couldn't believe that I knew anyone else with that name since it was so unusual.  As we talked, it turned out that it was her parents that I knew - back in the early 70's.  They lived out at the lake where we moved when we came to Arkansas.  They were an older couple and didn't seem to think my parents had the brains to raise me (I don't know why they thought that) and seemed to think that my parents had stolen their grand piano and put it in our basement (there are no basements in Arkansas).  Once, they told my mom that I was "surprisingly bright considering my parents".  SHE TOLD THAT TO MY PARENT!  Of course, I never mentioned this to the lady today, I led on like they were just a lovely old couple up the road.  I liked the Mom and Dad stockings up until I realized exactly who Mom and Dad were - they are priced and ready to go to the booth now. 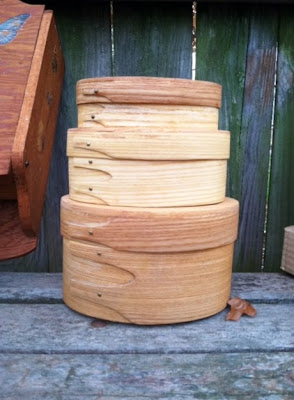 A set of three a handmade band boxes.  They are signed and fit inside each other - $1.00, 75¢ and 50¢ each specifically.  I think they might be worth selling on ebay. 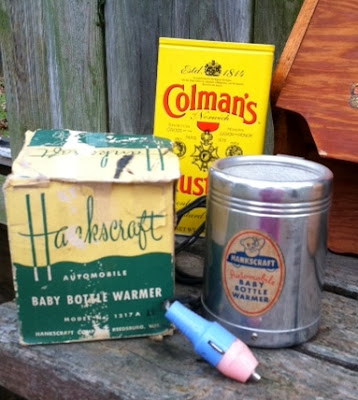 A big Mustard tin for crafting and an old Baby Bottle Warmer to keep in the car.  I won't be keeping it in the car, of course. 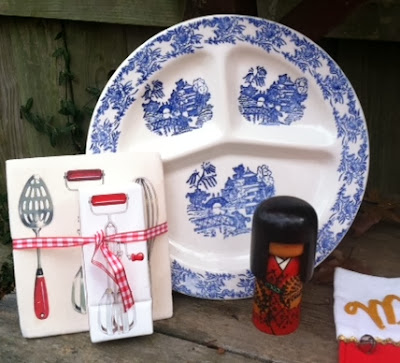 A floursack tea towel and bar of soap, a divided dish and a Japanese doll.  One sale I went to was donation only, so I gathered up a few things like the tea towel that I might not have ordinarily.  The big dish ended up having a crack in it, that I didn't notice.  Bummer. 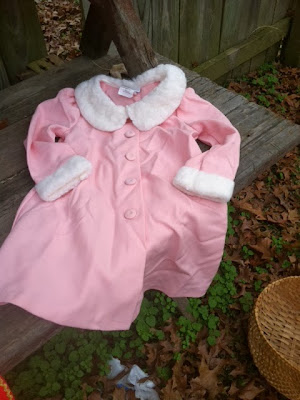 Hazel got a new vintage coat.  Because it is getting cold, you know. 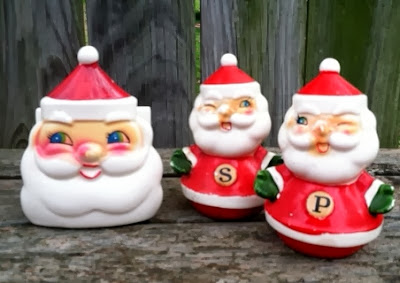 I had just found these Holt Howard Salt and Pepper Shakers in the garage in my stash the other day.  Today, I found the matching Holt Howard Napkin holder.  I "may" sell it, but I'm not sure yet. 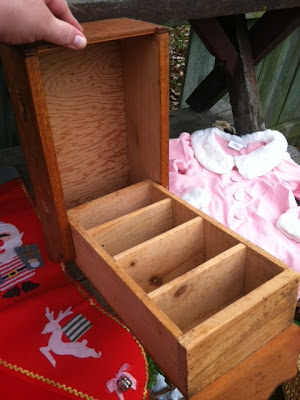 At the donation sale, I got this old handmade box that hangs on the wall.  It opens out to these compartments.  I think it might be for spices, but I really don't know.  Any ideas?  It is unattractive brown plywood and it has ugly butterfly decals on it, so I am really planning on parting it up.  I like the divided box either as a box or a shelf.  The rest will go buh-bye.

I got all my things set up for photos and the camera battery died before I could even take one photo.  So, these are bad phone photos.  Sorry about that.

Tomorrow is dry run day for the Bazaar - set up in the driveway so the neighbors can think I am completely nuts  - again.  Oh, and guess what?  There is SNOW in the forecast - in November in Arkansas.  That's just cray-cray.  (I'm too cool, huh?)
Posted by Shara at 11:43 PM