Chalk It Up To Experience

Lara and I went to the High School to set up our booth on Friday evening.  We had been working about fifteen minutes-  setting up tables, getting out merchandise, chatting and admiring each others things when I noticed that all the organizers were sitting by the door.  Just sitting there.  I JOKINGLY said, "You guys aren't just here because of us, are you?"  Long..........long..........dramatic..........pause. "Weeeeeeeellllllll, it's okay," they said.  I was under the misguise that there would be LOTS of other people setting up.  I guess I was el wrongo.  So, we skedaddled out of there and went home to return the next morning to do the rest of the set up.

When I got there Saturday morning, the room had filled up with lots of vendors.  But, I noticed that there were a lot of things like jewelry parties (*Cough* pyramid scheme! says Lara), Avon, Scentsy, Tupperware, Thirty One totes and the likes.  Now, there is nothing wrong with any of these companies, but it isn't what I was expecting there.  That's when I got a little worried.  Also, most of the vendors had a long table set up across the width of their area with some things scattered on the table.  That's was it. 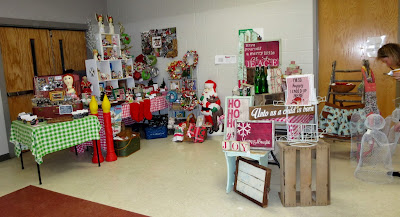 Here is our area.  BOOM!  Color!  Appeal!  Something for EVERYONE!  Hand crafted - you got it.  Vintage - yes sir.  Attractive displays?  Uh huh.  Lots to look at!  Plenty to see! 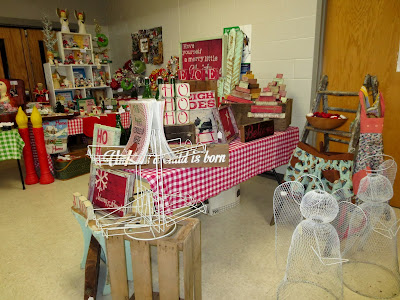 Let's look at Lara's side for a minute.  She makes these amazing wooden signs and trays with her new fancy tools.  She is SO talented!  She also had wonderful prints, handmade aprons and wooden Christmas trees. 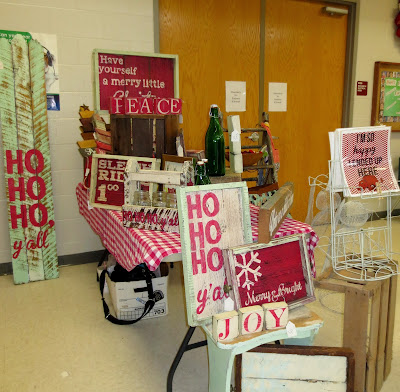 "HO HO HO ya'll."
HOW FREAKING clever is THAT? 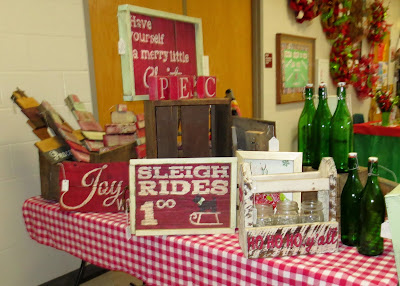 I loved all her colors and the pop of green with the glass bottles.  I had the extra tablecloth and it was the perfect red to match the paint on all her things.

*Can you see those mesh wreaths in the next booth - I HATE MESH WREATHS.  But , you know what?  She sold every one but ONE of them. 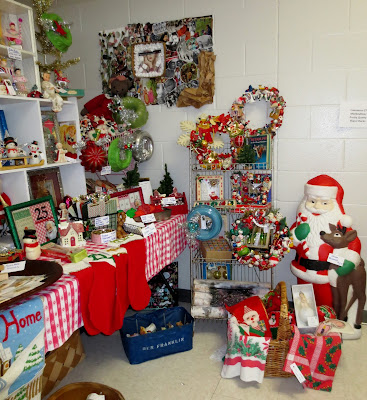 Then there's Shara - "Let's take everything we own because then there will be enough for everyone that comes to the Bazaar and there will be no need for fistfights in the area over any vintage or handcrafted goods" attitude. 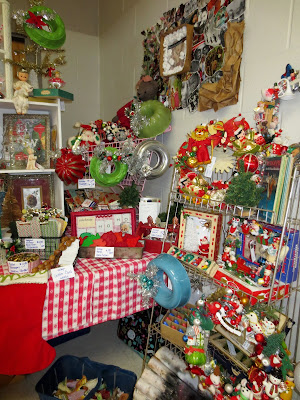 OH MY GOD.  I see a bare spot.  I could have crammed something in there.  Dammit.

*I was in that corner for five hours and I never could figure out what in the world was going on with that poster on the wall.  It had styrofoam peanuts and magazine clippings and it made no sense whatsoever. 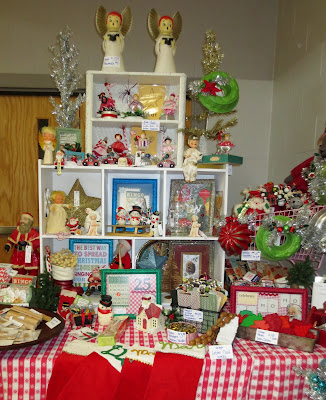 I filled up the cubbies, stacked things on top and that just wasn't high enough, so I put the angel blow molds on top of that!  Just in case Shaquille O'Neal came  I wanted something at his eye level. 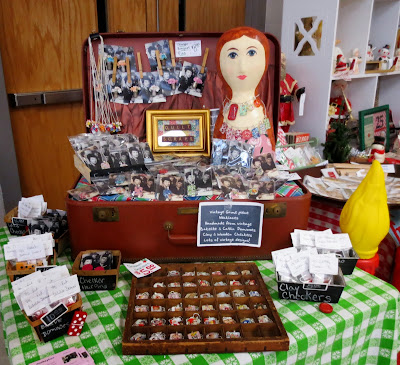 I took all my jewelry.  I have been stymied by why the Feedsack Pendants don't sell as well as I had hoped they would.  They do sell, but I thought they would do better overall.  So, on Friday night at 11:00 I was in the shower and I decided I should call them "Quilt Scraps" instead of Feedsacks. 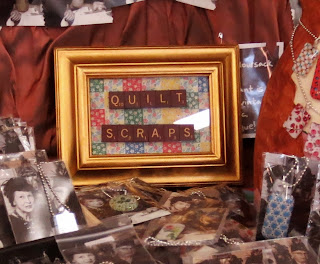 So, at midnight, I was making a sign that said "Quilt Scraps".  Seeing as how I was to be up at 6:00, that wasn't the greatest idea.  But, I do like the name and the sign.

The Bazaar began at 10:00, so we got all set up, ran to the bathroom then came back to man our booths.  Change at the ready, area looking good - ready for the masses.  I looked towards the front door and.......*crickets.  Not a person waiting to get in.  Slowly a few people did come and it was actually sort of steady for the four hours.  Well, for three hours.  Maybe just two and a half hours....ANYWAY.......It was SO weird.

People would come back towards our area and  literally just walk right past Lara's cute trendy wonderful stuff like it wasn't even there.  What the hell were they thinking?  A few would venture into my area but they did a quick one two glance and the left.   Empty handed.  I would hear, "Oh how cute" or "Oh, how neat."  I would see people holding things, but then they would just put it down and walk away.

In between our area and the area next to us, they had placed the big industrial sized trash can and that was also the only place we could squeeze in a few chairs to sit.  We hadn't planned on sitting, but hellooo...there was nothing to do......no sales......no customers.  We would be sitting there and here would come this big group of people smiling and holding their sample plates of Jalepeno Jelly on a cracker and we would think "Oh good!  Customers!" and then they would walk right up to us and fling their trash over our heads into the trash can and just keep right on walking.

Also, we noticed that SO many people were carrying these identical shopping bags so I finally asked a lady what everyone was buying.  She opened it to show these Razorback pig ornaments that a lady had made out of a red plastic ornament, red jingle bells, and googly eyes.  It was cute, but the kind of cute like when your third grader makes it school and you HAVE to put it on the Christmas tree, but you kind of stick it in the back so no one can really see it, kind of cute.  Once we saw that, we realized that there was just a different type of clientele coming through those doors.  They weren't going to "get' our stuff.  (We really just told ourselves this so we wouldn't cry.)  I KID!

I did sell some stuff, but not a whole lot.  I sold three necklaces, but not one other thing I made - except for a Magic Santa Skeleton Key, I forgot about that.  I sold those %$#@^& Scrabble words.  WHY do people like those stoopid things?  I mean, I am glad they do, because it is easy money, but gosh, why can't they buy something I MADE or that has vintage character?  Not Scrabble letters that say CARDINALS.  Booooo.  After rent I made $63.00.  Granted, that is money I didn't have before, but it was a LOT of work to set up and haul all that other stuff.

Now, having said all that - I did have fun.  I enjoyed the day.  I was with The Bean and I had the pleasure of spending the afternoon with Lara.  Bless her heart, after rent, she made $8.00.  I really, really do not understand why people didn't buy her stuff.  In the words of Macklemore - "It is f'ing AWESOME.  I'm surprised she's still speaking to me after all that work for $8.00.  But, I ran into her at an Estate Sale today and she had ample time to bonk me on the head in the basement in retaliation.  But, she didn't!

The good news is that we both have booths and we already priced our things, so all we have to do is take it out there where people GET us and LIKE us and WANT our junk.  It will all be okay.  For the record, we heard through the grapevine that the advertising person for the event flaked out and never did much.  They only had a sign by the road and I guess people just didn't know about it.  They did get $50.00 times thirty vendors, so the fundraising part on their part worked.  It just wasn't great for us vendors.  Now, on the flip side, this is the Bean's graduating class and the same three Moms doing this event were there same three moms (along with me) that used to do the carnival, the PTA, the Hospitality Committee, Teacher Appreciation, etc., etc., etc..  Out of a class of three hundred kids - there are only a handful of parents that help with the events.  It is hard to do it all.  So, I can understand that part too.

Lara just posted her view too.  I haven't read it yet.  I hope she still likes me!
Posted by Shara at 11:15 PM