The Booth, A New Boyfriend and Some Christmas Junk

Yesterday I went out to the booth and got a wild hair and slapped up a bunch of signs that said "50% off the ENTIRE booth."  I had just pulled all my jewelry and ephemera items to take to the holiday Bazaar and I saw a lot of stuff sitting in that booth that has been there awhile, so I just decided to have a big old sale.  We are having our Open House Anniversary Affair this weekend, so it promises to be a busy weekend.  I will keep it all half off until I stock it with Christmas the week of the 18th.

While I was working the booth, a nice (and kind of handsome) man came into look around.  He started asking if I was "the shopkeeper" and asking for different things.  He had an accent, so I asked him where he was from.  "I am visiting from Norway," he said.  He asked if I had things to go in a Diner or a Service Station.  I asked if he owned those places and he told me that he was building a full service Diner and an operating Service Station at his HOUSE of his own amusement.  He whips out his phone and starts showing me pictures of his many, many cars - '63 Split Window Corvettes, dragsters and boats, his Diner,his service station, his car lift, his house.....and on and on. He tells me how he comes to visit his friend in the area and goes on buying sprees and then ships things home.  I ended up selling him $50.00 worth of old pennants to hang in the Diner.  He had never heard the word "Pennant" and kept calling them "Peanuts".  It was all very interesting.  So, long story short, I have decided to move to Norway with Johnny.  :D

After I worked the booth, rearranged the booth, pulled items for the Bazaar, came home and unpacked the car and carried things into the garage and into the house, of COURSE I would want to go to a thrift store and look at MORE stuff.  But, I did.  I did have donations to drop off, so why not have a looksie, I say.  I was looking specifically for salt shakers and satin ornaments. 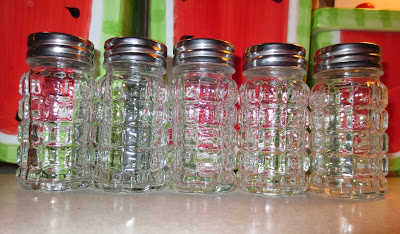 I had luck in the salt shaker department.    The plan is to make snow globe ornaments in them.  I put the Breadman on Salt Shaker finding duty.  He was quite pleased with himself when he found five glass salt shakers.  He also had two ceramic carrot shaped S&P's in his hand, and I honestly have no idea how he thought I was going to make snow globes in carrots, but at least he tried.  The Salt Shakers were $3.99 minus 75% off, so about 99¢ or so for all. 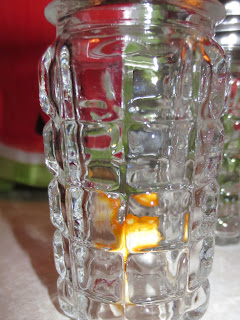 Which would have been an excellent deal IF you could actually see the things inside them after I made the snow globes.  Can you see the deer in there?  No, no, you cannot.  Back to Pinterest for ideas.

Today I hit three thrifts in search of vintage Christmas.  There is a LOT of Christmas out there, and some of it is vintage if you look hard enough. 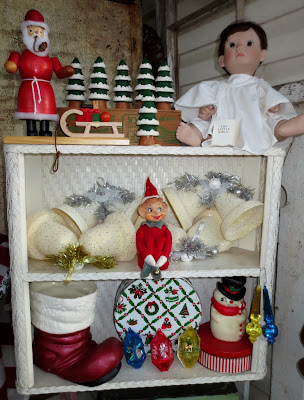 Today's finds.  I found the Redmon Shelf outside at the Salvation Army for $2.00.  It matches the Bassinet I got a week or so ago perfectly.  I'm going to use it for display at the Bazaar and then use it in my Office.  And, by office, I mean room full of crap with a computer in the corner.  The Doll is a Lee Middleton Little Angel.  He is signed and like new and really has just the sweetest face.  I had planned on doctoring him up and Christmasing him up, but he seems to sell for pretty goon money.  So, we'll see. 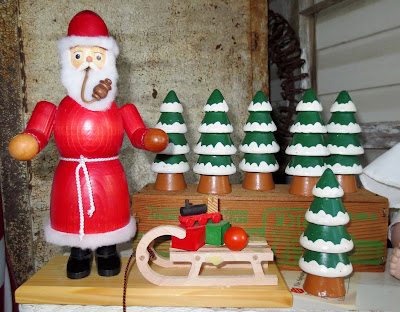 I love these German Smokers.  The Santa and Sleigh are one piece and the trees were bought at an entirely different thrift, but it all goes together perfectly.  The old Kraft Cheese box was 99¢ and will make good display or storage.

These glittered bells look old but feel kind of new.  Either way they will be good on wreaths or used in some fashion. 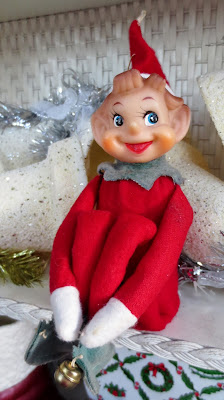 The Kneehugger was hanging on a display that said all ornaments - 25¢.  If he would have been my only find today, I would have been happy.  He has jaunty bells on his shoes.

The jumbo Santa boot was 75¢ - I' d like to put a big bottle brush tree in it and glam it up with mini Shiny Brites and mercury glass beads.  At the Salvation Army, they have a big Christmas display set up in the vestibule.  I spotted one of those plastic dime store Santa and reindeer that everyone loves, so I grabbed it.  But, when I checked out they told me that it was for DISPLAY ONLY.  I can see using a tree for display, but a silly dime store decoration?  Silly.  I wanted that thing! 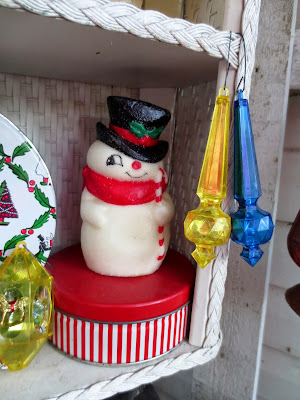 A vintage snowman candle that wasn't priced so the lady just threw it in my bag for free. Some old plastic ornaments that I have never seen before, and a red and white striped tin.  I think the tins are just from Fiji's or one of those cheese and meat order places, but I like them for adding eight to displays.  And for storing bits and bobs. 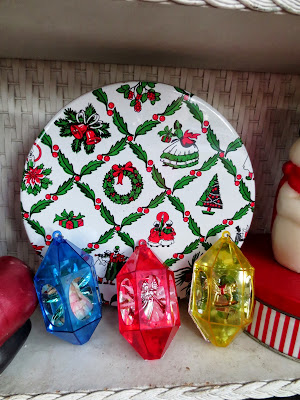 A fun old tin and some more plastic ornaments.

In the ten minutes it took me to take these things in and gather up the next load, it got dark.  Of course that was at 5:00.  So, this bad photo of the rest of the junk is on my stove.  How pin-worthy!  :) 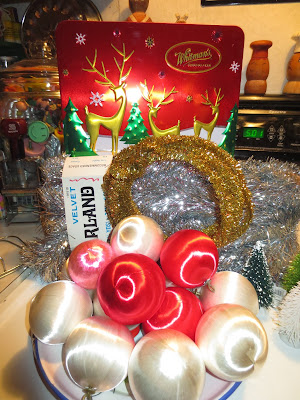 A big Whitman's tin for 25¢ - I keep all my craft supplies in these old chocolate tins, a big package of silver garland for wreaths, a bundle of vintage pipe cleaner material for crafts, and some satin covered ornaments that I went looking for in the first place!

There is so much Christmas in the thrifts, I have to be careful and shop wisely!  Otherwise, I'll fill up the house and go broke!  I think I did okay today and I only spent less than $10.00.

Are you vintage Christmas thrifting yet?