The Weekend in Junk

Saturday morning I had the alarm to get u and go hit a few Church Sales and some yard sales.  I won't tell you what time I set the alarm for because some of you would be, well, alarmed, at what time I was getting up. Let's just say that some of you die-hard's would have been up, gone, shopped, had a Starbucks and donuts and been back home before I was even planning on getting up.  I am just not a morning kinda gal.  Ok, so now that I reread that, I suppose you are thinking I slept in until about noon.  I was planning on getting up at 7:30, but when I woke up, it was raining, so I rolled back over for another hour and then I got up to do a weather check.  It was still wet and dreary, but I knew the Church Sales would still be on no matter what the weather, so I downed a cup of coffee and hit the road.

Church Sale #1:  (If you read YSQ, forgive me for the obvious cut n paste)

Church Sales are few and far between in my are, so I was happy to find one. I got there after the sale had been going for three hours. Remember that. THREE hours.

As I got to the back of the room, there was a table full of old rusty junk - wrenches, a level, some weird what nots off old stuff, and I don't really know what any of it was originally, but it was cool and I like junk I can re-purpose. Things were priced 10¢, 25¢ and 50¢ so I started gathering up an armload.

As I was putting about the fourth thing in my had, a man and a woman from the church walked up and started discussing the pricing. Someone had sent them back to remove all the prices and then place a Make An Offer sign up. He (whoever that is) felt it had been priced too inexpensively and wanted higher prices). Even though the table was still full three hours into the sale..... Anyway, I said I would put my things back and they both said NO you already had them, go ahead and take what you want. So, I picked up a few more things and went on my way. 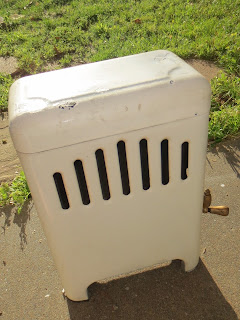 I walked around holding my rusty junk and looked for other things.  I spotted an old enamel heater.  I remembered that Laurie bought one in Texas and schlepped it all the way to Oregon in her suitcase so I figured I had to buy this one.  I have no idea what to do with it, so I can't wait to see how she re-purposed the one she bought!  It was only $1.00, so I am sure I will figure out something. 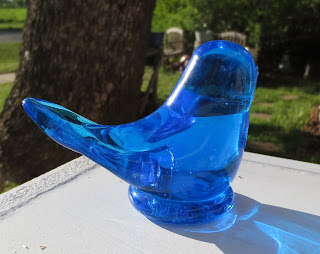 I also found a Terra Bluebird.  These things are at every single sale around here.  But, I always buy them if they are 25¢-50¢.  This one was a quarter, so it fit the bill. 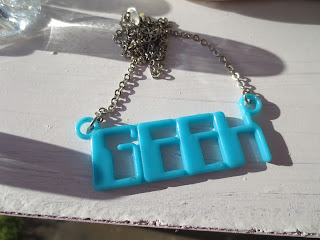 Oh yes, and this.  A GEEK necklace.  "Geek" is a big word in my family.  I answered to "Geek" as a child and considered being a Geek a good thing.  I think it means more of a computer nerd now and not a Circus Sideshow act like we all meant it.

When I was done shopping, I went outside on the porch to check out and the man looked at my stuff and did a big puff of air out of his mouth indicating he was NOT happy that I was buying these cheap things. I told him that someone had told those people to raise the prices, but they said I could have it at those prices. But if he didn't want me to have them, it was okay. He said it was fine he wasn't going to argue over it (with the people, not me). But! Then he opened the door to the church and made all the workers come out so they could look at my items and then he went on and on and on about the prices and it being too cheap and how they should have been priced higher. Meanwhile, I feel about two years old and about two inches tall standing there even though I did nothing wrong. My total came to $3.00, so I gave him a five so maybe he might feel a little better. As I walked to the car, I could still hear him telling them what a bargain I go and how much money they just lost.
So, if it really was such a great deal for me and such a big loss for them, how come those things were still there three hours into the sale? It kind of knocked the wind out of my sales for the rest of the day. I didn't do anything wrong, but I kind of got made into an example. 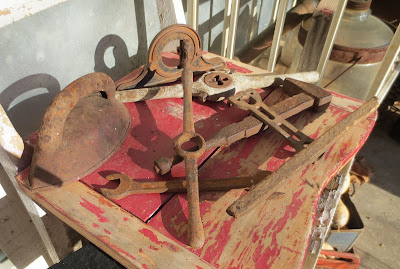 Oh, well.  On to the next Church Sale that was supposed to be a half a mile up the road.  But, I never could find it so they must have cancelled it due to the rain.  I spotted a yard sale sign up the street, so I followed it. When I got there, the yard was jammed pack with STUFF and I got really excited.  Then I realized that it was mostly all new old car parts and car manuals and manly stuff.  They did have some other stuff like books, but each one was wrapped in Saran Wrap with a price sticker on it - the kind like Grocery Stores use.  I hate it when yard sales price things with a sticker gun.  I don't know why, but it seems too professional to me.  Plus, they never price things lower than $1.00!  So, I left empty handed.

On to the third supposed Church Sale of the day.  I found it, but it was mostly books, some junky toys and lots and lots of clothes.  I left empty handed again.

I decided to give up and hit a couple thrifts.  The thrifts have been better to me than yard sales lately. 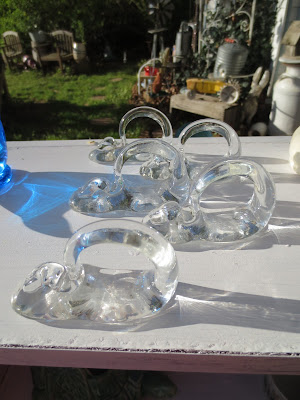 I found this set of hand blown glass napkin holders/place markers in a baggie.  They had the ungodliest ugly flowers hot glued to them.  They were hideous!  They were in the final week so they were only 50¢.  I took a chance and soaked them in water all night until everything popped off.  They are really sort of pretty.  I'm trying to think of another use for them other than napkin rings. 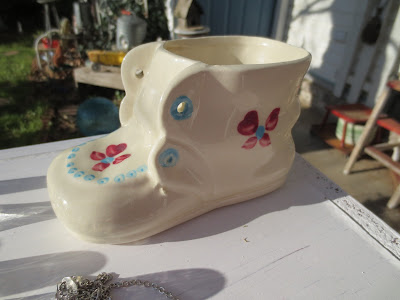 A baby shoe planter.  I don't usually buy baby planters, but this one is heavy pottery and really cute.  Plus, in the words of Macklemore - IT WAS ONLY NINETY NINE CENTS! 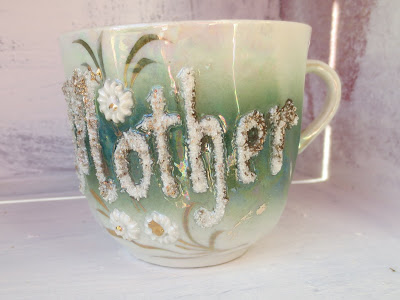 A sweet Mother cup for my collection.  Hey!  I need to get my Mother's Day stuff out.
It's purt near here! 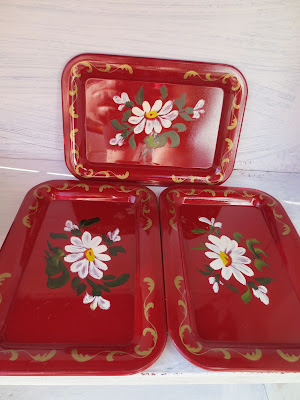 Three small toleware trays.  I'm a sucker for these but I don't know why. 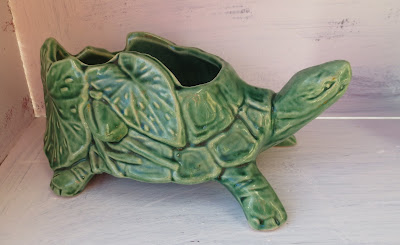 There was a lady standing in front of the shelf where this old turtle planter was sitting and I didn't want to be rude and snatch it out from her, so I waited.  I did chant under my breath, "Step away from the turtle...Step away from the turtle" and shot daggers through her with my eyes.  Luckily, she moved on and I grabbed it.  I knew it was a cool old piece of pottery when I saw it. 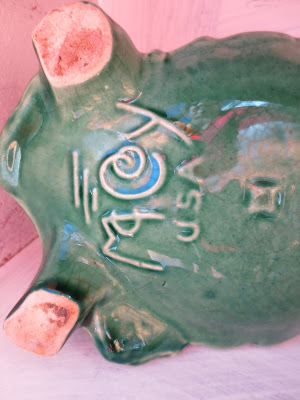 And, I knew it was a good one when I saw that McCoy mark.  Score.  When I checked out the lady admired it and asked me what I thought it was worth.  She said she LOVES it when someone finds a treasure and it is worth something.  She also told me that she had a collection of turtles that her co-workers had given her over the years.  I thought that was really sweet until she told me they gave her turtles because she was a slow worker.  She kind of hung her head and said, "I wasn't slow.....I was thorough."  She did pat the turtle on his head as I picked him up.  He will live in my pottery collection. 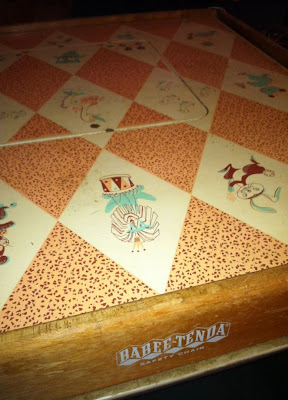 Today I went to a sale and picked up a vintage Babee Tenda childs table.  It's missing the baby seat, but the graphics on the top were just too wonderful.  I already have one of these with the baby seat in my garage, but the top is just plain.  So, I am going to swap out the tops and keep the sweet graphic one and sell the other one.  I only paid $3.00 for the one I have and $5.00 for the one today, so for $8.00, I have two.  Not a bad deal! 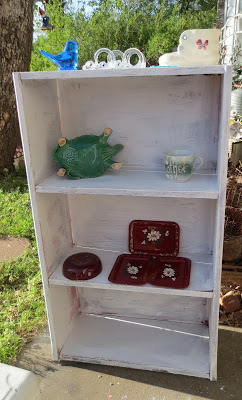 And, this old wooden shelf for the booth.  It was red but I slapped a very bad coat of white paint on it.  I staple old flash cards and marquee numbers to the sides so it fits in my booth and I fill up the shelves with so much stuff that you will never be able to tell the paint job looks like someone from the School for the Blind painted it.  :)  Plus, I have learned that if you paint a shelf really nice - people want to BUY it!

Did you find any good junk this weekend?  I'm hoping for some sunshine next weekend a a TON of sales. 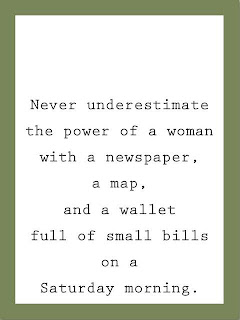