It's been awhile since I took you on a tour of the booth.  I think I had mentioned the possibility of expanding into the small booth to the right of mine.  I was planning on it, but then the current vendors decided to stay, so that fell through.  Then the vendors in the booth on the left of me decided to vacate, so that became available to me.  But, it is the same size as my booth - about 7' x 8".  I cram a LOT of stuff in my booth so I really didn't think I could come up with that much more stuff to keep mine properly stocked and fill up the new space too.  So, I am still in my one area but that is okay because it works for me.


The flea market is an old building that was once the town's doctor's office and it has been rehabbed many, many times. Several times I have been working in there and an old man has said, "I was born in here!"  The first time, before I knew it used to be a doctor's office, I thought "WTH?" It has bare rafters inside and you can see the old star joints in the walls, pieces of old tin ceiling and parts of old bricks.  I think it is kind of neat in there if you know the history.  Other people think it has an unfinished look to it.  Fluorescent lighting is scattered throughout the building.  With the high peg board walls, a lot of the booths are kind of dark and shadowy.  So, each vendor has found some sort of old lighting or chandelier to hang up for their own lighting.  Somehow, I lucked out and got the only full complete light fixture in my booth.  So, it is very well lit and easy to shop.  It is, however, difficult to take photos due to the bright light.  So, bear with me. 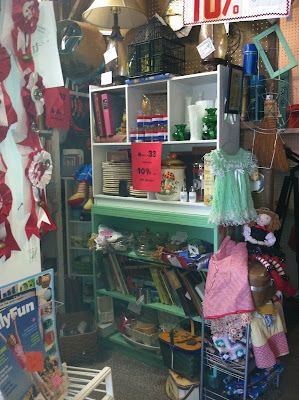 As you can see, I like to cram it full.  I took this photo before I straightened up. 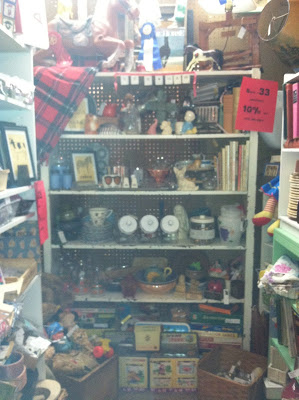 The back wall.  More stuff and stuff ans thing and things. 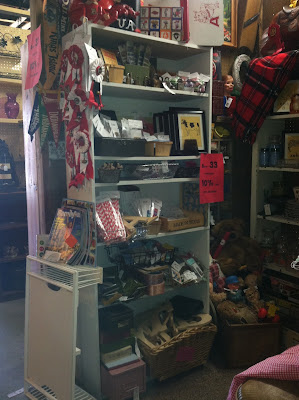 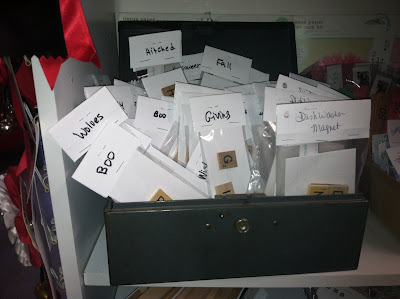 I made all of the Scrabble tile words and attached the tiles to card stock with double stick tape.  Then I put them in my car overnight and guess what?  i twas cold and all the damn letters popped off the cards.  At least they are still in order and they make sense, but I was so happy to have figured out a good way to package them. 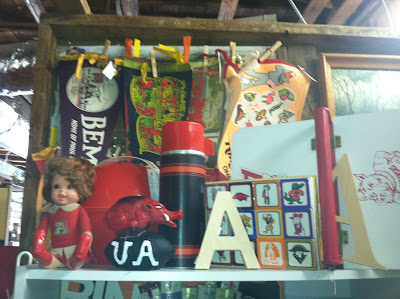 I was saving all the Razorback stuff until Fall, but then I decided to just throw it on top of the shelf now.  Vintage Razorback items always do well for me.  Those old pennants came out of someone's trash many years ago.  I like them hung up plus they do sell. 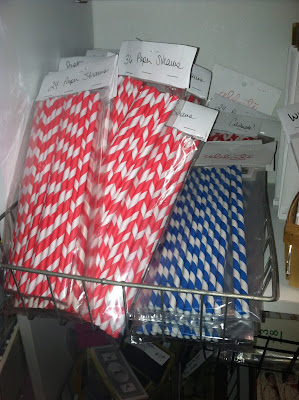 Packets of paper straws in 12, 24 and 36 count packages.  I have red and white, blue and white and red, white and blue.  I want to find some black, green and orange for the other holidays.  And pink.  I love pink! 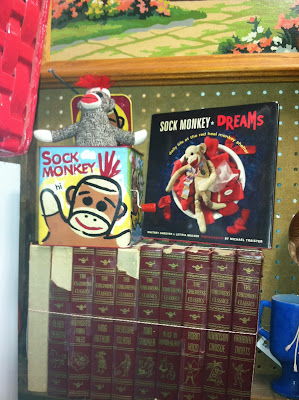 There are 2x4 beams that run along the middle of the booth, so I cram stuff on there too.  No wasted space in MY booth! 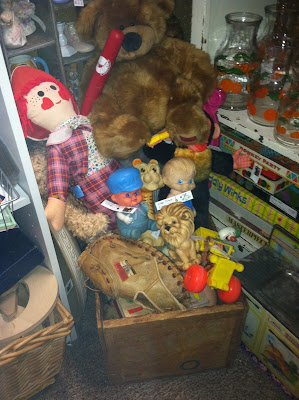 The toy box full of all vintage toys.  It's usually a big hot mess on the floor when I get there to straighten up.  I think some parents park their kids in there to play while they shop.  I'd prefer they didn't do that, but what are you going to do, right? 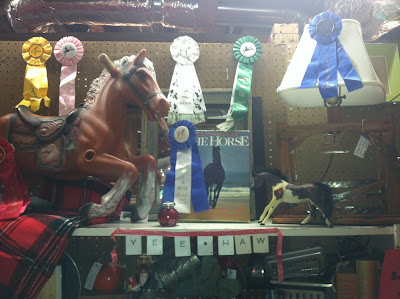 I bought this old plastic Hobby Horse at Goodwill last week and that spawned a horse themed display.  I sell a lot of those horse ribbons, so I added them, a wool throw and a horse ranch lamp.  I found the Horse Encyclopedia and the plastic horse on the way to the flea market at the Super Cheap Thrift.  Kind of kismet. I don't know if any of it will sell, but at least it's different that most of the other booths right now. 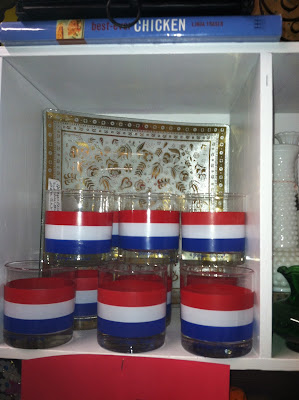 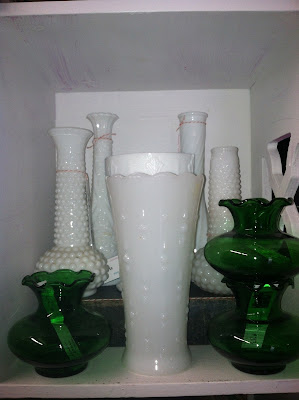 Milk glass.  I SWORE I would never buy it.  But, it's hot in weddings now and I'll squeeze a dime out of anyone anyway I can. 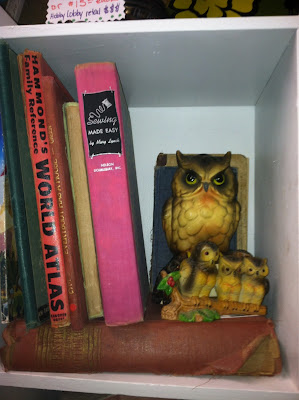 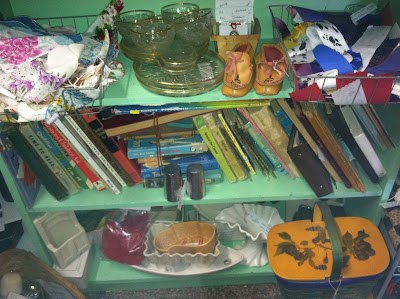 My vintage hankie collection (yes, I am selling off one of my collections), books, pottery and more horse ribbons. 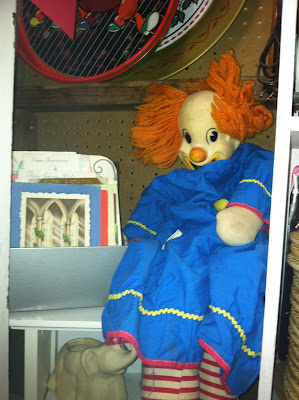 This clown freaks out many people that come in my booth.  He's kind of the mascot of the flea market.  He made the Facebook page awhile back and, for the most part, people FREAKED OUT about it.  SO, I stuck him in the back corner for an added "ACK" from people.  He's actually a Bozo the Clown and kind of cool.  Albeit a bit scary. 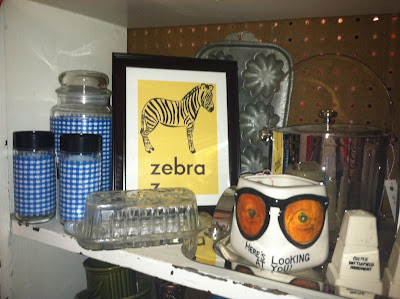 How about that "Here's looking at you" glass - with those creepy googly eyes on it? 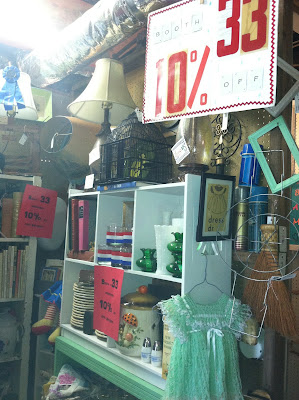 Cubbies full of stuff.  Flash cards, vintage baby clothes, frames, lamps and a bit of everything.

Sometimes I wish I had one of those froo-froo booths that are all one color or all one theme.  But, I get a lot of compliments on my things and the fact that they are all vintage and unique.  So, more STUFF is what I will sell.

If you're ever in the area - I'll give you a tour!