The Week in Junk: Thursday Edition

Wednesday I dropped the boys off at the movies and went to meet my Dad for an afternoon of thrifting.  He goes to garage sales on his own, but he never goes to thrift stores unless he's with me.  I take that back, there is one thrift that gives away of high dollar Bakery bread with any purchase on Thursdays.  So, occasionally he goes and buys a 50¢ book and scores a $8.00 loaf of bread.  He never buys anything at the thrifts, but he likes to follow me around thisclose to see what I pick up.  Then he wants to know why on EARTH I am buying THAT.  I gave him a crash lesson on upcycling and repurposing.  The last time we were together, I bought an old time card holder and he really didn't understand that one.  It works great for holding flash cards at the booth though!

We went to three thrifts and I only spent about two dollars at each one.  It wasn't the best day for finding good stuff.  But, it's always fun to go thrifting even if you don't find a carload of good stuff. 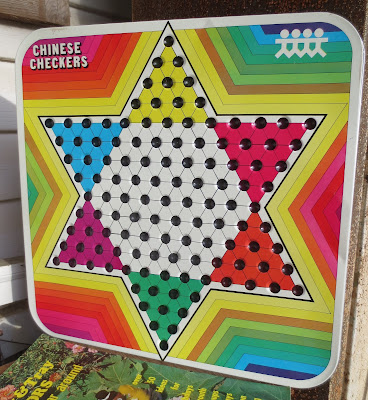 The first thing I bought was this old metal Chinese Checkers game.  It was still in the box with the marbles too.  I have sold five of these so far in the booth as wall art.  So, to the booth! 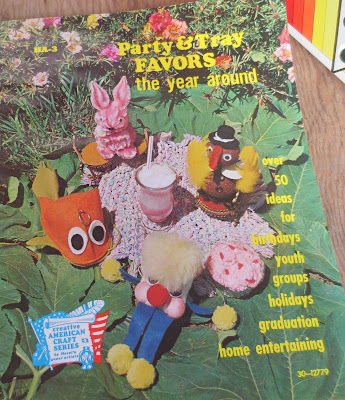 At the same thrift, they have a never ending supply of vintage party decor and craft booklets.  I picked up three copies of this Party Favor booklet.  There are some pretty funny ideas in there.
*Keep one, sell two* 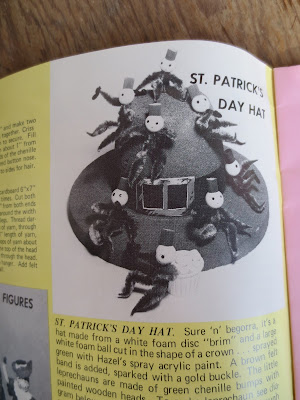 Including a St. Patrick's Day that is a match made in heaven for Laurie.

The second stop had me purchasing some items that the checker asked, "What's THAT?" 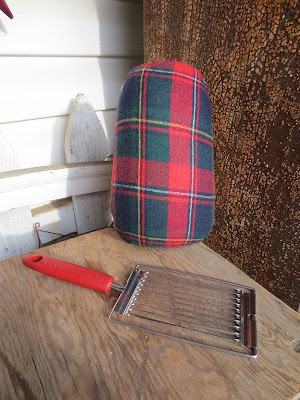 The egg/tomato slicer had her baffled first.  Then she picked up the big plaid egg and said "What is THIS?" 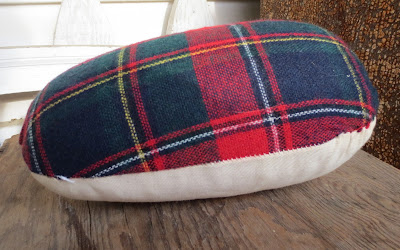 I told her that is was a form for sewing sleeves on dresses and shirts.  "Oh, you are smart" she said.  No, not smart, I just have a whole lot of useless knowledge in my head about junk!  I was thinking about re-purposing it into a cat or a Santa, but I see they sell for about $25.00, so I might throw it on ebay. 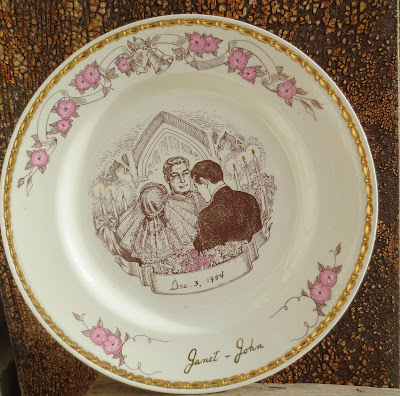 When she saw this old plate she said that they had made bets that it wouldn't sell since if has names on it.  I think the sweet vintage graphics outweigh the fact that it was "Janet and John" anyway.  Next year will be their 60th Anniversary.
*Booth*

At the third thrift, I was looking on the shelves with the Fisher Price plastic toys.  My Dad really wondered why I was looking at that stuff.  But, I have learned to look everywhere at the thrift.  Because, you never know what you will find anywhere.  It was at that moment that I spotted IT.  The thing that I knew I was meant to find - the reason I stopped at that store and the reason I was looking in Plastic Toyland. 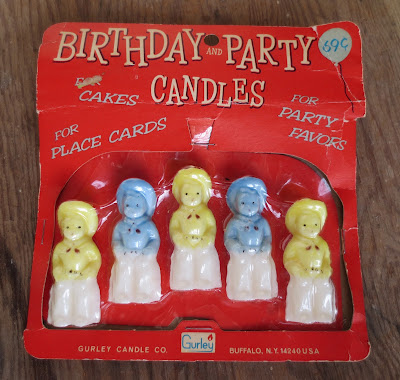 Vintage Gurley Birthday Candles.  In the original package.  Not melted.
And, they are cowboys to top it all off! 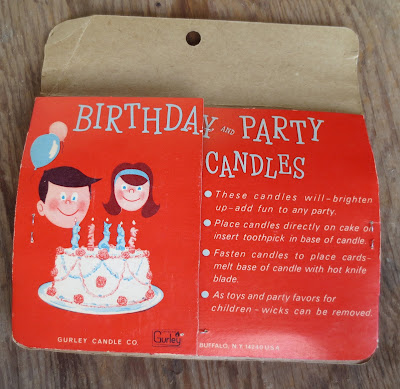 Asking price of these fabulous little candles?  50¢.
MINE, MINE, MINE!
This was one of those finds that I clutched to my chest and hid from other people in fear of being attacked by jealous shoppers.  No one else would have even wanted them, I'm sure.  But, golly, they made my DAY!

Today I went out to re-foof the booth and stopped at the Super Cheap Thrift along the way.

Since my Mom went home, we have found there are things that she needs to make her day easier or things that her therapists or the nurse have suggested she should have available.  Today I found three things for her - things I wouldn't have even noticed when I was thrifting in the past.  Just another reason to always look at the thrift before you go buy anything new.  Well, almost anything.....:) 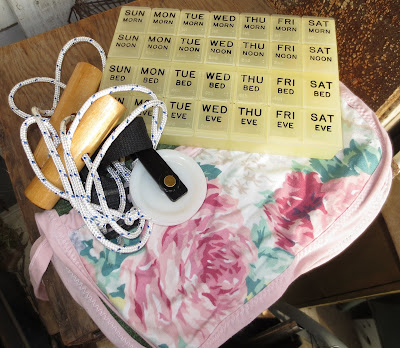 The Nurse wanted her to have a second pill box, the therapist had mentioned a pulley exerciser and she was saying she needed some sort of a way to carry things in her wheelchair.  So, I found a pillbox, an exerciser and a pouch that ties on to a wheelchair for the remote, glasses, etc.  *She can walk and does, but she sits in her chair instead of trying to maneuver her recliner right now. 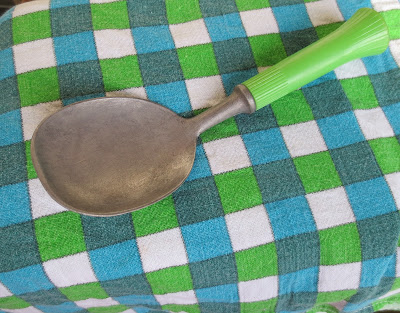 Other finds included an old ice cream spade.  I love these and always pick them up when I find them.  The checked tablecloth isn't especially old, but it's not especially new either.  I seem to have a crush on checkered tablecloths lately.  I keep picturing a wedding with a checkered tablecloth, an old thermos and a picnic lunch packed in a vintage picnic basket for each group of guests to eat picnic style.  Yet, I know NO ONE getting married.  But, does that stop me from buying these things and thinking about that wedding?  Nope. 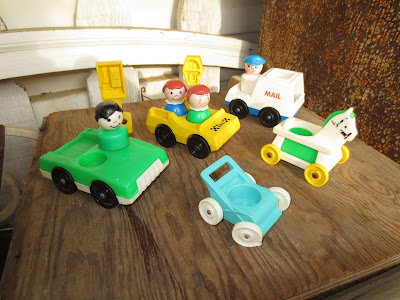 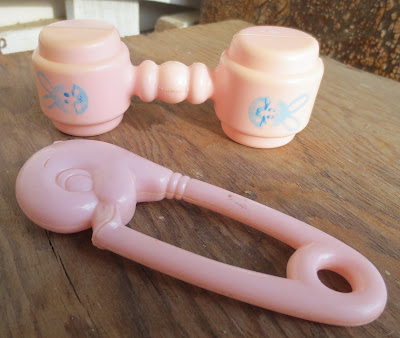 Two old hard plastic rattles.  Blue bunnies on one, a duckie head on the pin.  I found these mixed in the baby department with the new Gerber stuff.  Like, I said, you have to look everywhere!
*Keepers* 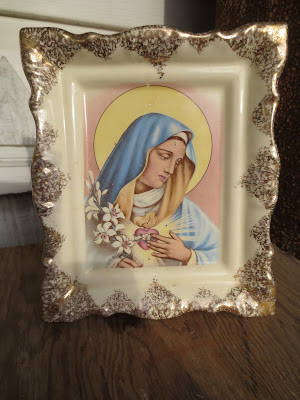 I'm not much on religious things for the booth, but the pink in the background of this sweet vintage planter sold me.  I think it's super sweet and will surely speak to someone.
*Booth* 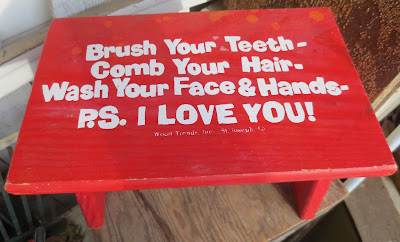 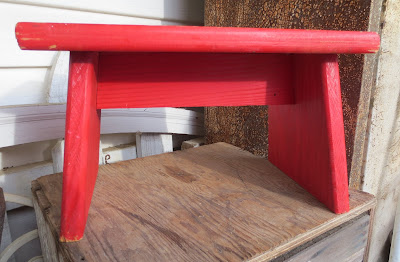 Since I am vertically challenged, I keep a variety of small sturdy stools all around the house.

There are a slew of sales this weekend.  Including TWO Church sales within eye shot of one another.  it sounds like super fun right now, but when the alarm goes off and I have to think of actually getting up and going - not so much.  I am so not a morning person.  But, we'll just have to see what I decide when the time comes.

Hope you find some good junk this weekend.