Wednesday is errand day at my house.  The Breadman is off so we usually go grocery shopping, pay bills and do whatever we need to do.  But yesterday I decided to do all that stuff a day early.  That left today a clean slate.  I suggested that they boys stay home and watch the nine hour movie "The Hobbit".  Okay, it's really only three hours, but I simply do not have time or the willpower to sit through a three hour movie in one sitting.  I've read the book and I know the movie is good, but I am just not into it right now.  So, the boys stayed home to watch that and I decided to hit as many thrifts as I could before I went to see my Mom for the afternoon.

Now, in theory this sounds like a great plan.  In actuality, it was kind of a waste of gas.  But, I enjoyed myself and I did end up scoring a few good deals at my very last stop.

First stop was a thrift that used to be in a huge location then they relocated to a much smaller location.  I went once and found it to be not great, so I hadn't gone back.  I decided to give it another shot today, but it still wasn't that good.  I did find a nice soldered pendant like I like to wear for $2.00.  They also had a grocery cart full of new calendars from Barnes and Noble.  I got The Bean a Hunger Games calendar and I got a 365 Cake calendar.  A different cake for every day of the year.  Great Googley Moogley.  Just what I need to look at every single day.  CAKE!

On to my second stop - a big thrift - giant in fact.  It used to be a furniture store.  It is packed to the gills, but I honestly could not find one thing in there worth buying.  Not even things that were overpriced or cracked or anything - nothing was my style or stuff I like to resell.  On my way to the door, I walked up the kitchen aisle one more time and spotted one small thing that at least made the stop worth it. 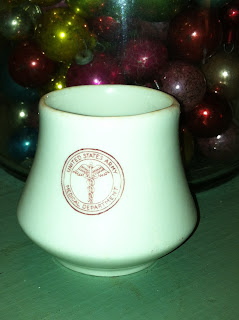 Okay, so it didn't really make the stop worth it.  But at least I didn't leave empty handed.  That's a no no!  This little piece of stoneware/restaurant are is marked United States Army.  I'm not sure what it is - I thought it was a little creamer, but it doesn't have a spout.  Or a handle.  Maybe a toothpick holder?  Or a mini spittoon?  Or a cotton ball holder.  I kid.  Except maybe about the toothpick holder.

Third stop and I was out of time.  This had to be the place to find something.  This was the Goodwill across the town where I usually leave empty handed. 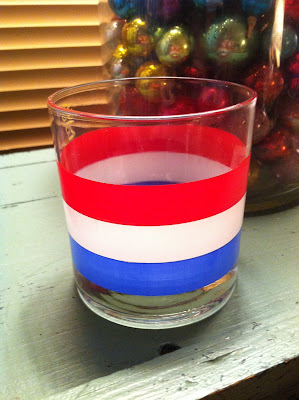 I spotted this rocks glass on the shelf in the glass section.  I thought it was colorful and would be good booth fodder. 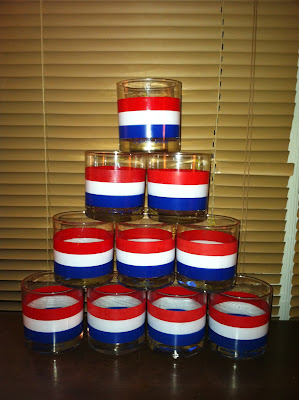 Especially since there were ten of them. 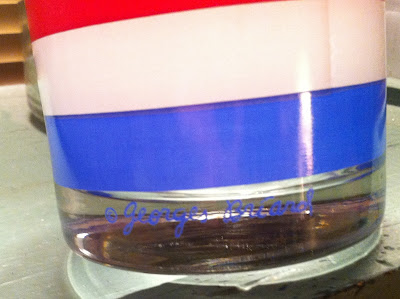 Then I picked one up and saw the name Georges Briard and knew I had found something good.  I'll put them in the booth this summer with my Patriotic/BBQ summer display and see what happens.  That mid century stuff is hot, so hopefully I'll get a bite on them.  I'd put them on ebay, but the idea of packing and shipping ten glass items is just not appealing to me. 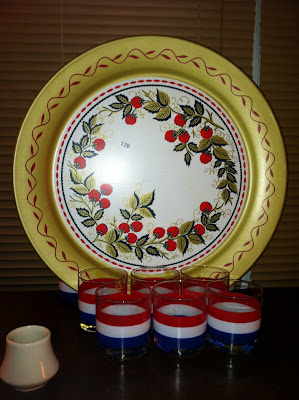 I also found this giant tray with raspberries on it.  You can see how big it is behind those rocks glasses. 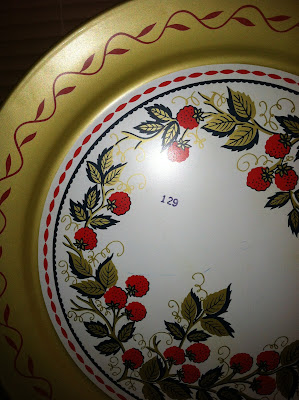 I like the raspberries.  I don't think I've ever seen anything with raspberries as a motif before. 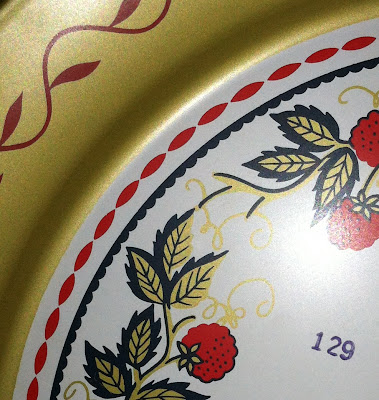 See where the store marked it with an old Garvey marker?  $1.29.  Poor placement for the price as far as aesthetics   But, I think it adds to the vintage charm.

So, that's it.  Just a couple of things and all destined to resell.  Still it was nice to get out by myself and take my time poking around in stuff.  There are a few sales in the paper for this weekend, but there is also a mix of snow, sleet, freezing rain, ice and regular rain coming.  So, I don't see any of those sales actually happening.  But, soon!  I just know it!
Posted by Shara at 11:30 PM