Today The Breadman got home early from work and decided to take a nap.  So, The Bean and I slipped out to hit some thrifts all by ourselves.  Dad just doesn't "get" thrifting, but he always tags along.  He kind of hovers over me and cramps my style - I need to look at EVERYTHING and he doesn't understand that.  But, I have found vintage pottery with the gardening stuff and other things that were in areas that they shouldn't have been in the first place.  So, I really do HAVE to look everywhere and at everything.  The Bean is used to that and he has a route he takes too - books, music/DVD's/video games, glass case in the front for knives and swords and the toy area to look for Nerf Guns.

We went to three thrift stores.  Left empty handed at Goodwill.  I usually find something, but nada today.  On to a thrift that used to be my favorite, but it has moved to a new location and it is "eh" at best.  I spent twenty five cents there for a 1937 book entitled, "Food for Fifty". 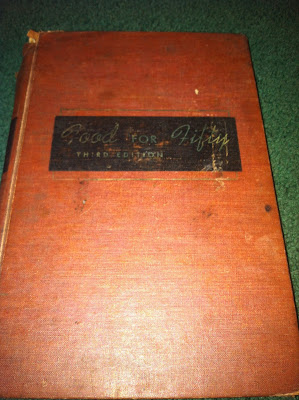 Because I very often have 49 of my best friends over for dinner. 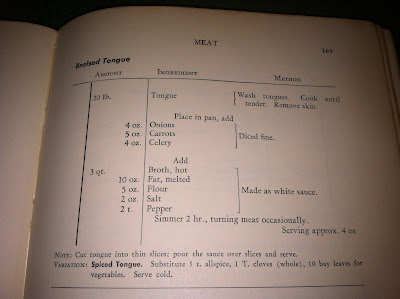 And, they LOVE *Braised Tongue*!

Can you believe they think you need 20 pound of tongue for 50 people?  That's a lot of tongue.  My Grandmother loved tongue.  (That is a weird thing to type). She would ask me to look for it at the grocery store every time I went shopping for her.  When I would come in the door she would say, "Did they have tongue?" and I would say, "Not today."  But, I never, ever looked for it.  Not once.

Despite the tongue recipe, there are some interesting recipes.  I was reading the pie recipes and the Bean chimed in that a pie for 50 people would be a really, really BIG pie.  I hated to tell him that it was actually a recipe to make 8 normal sized pies.  He looked at me and said, "Well, duh. I was kidding."  I can't tell him that I had actually thought it was a recipe for one huge pie myself.  :( 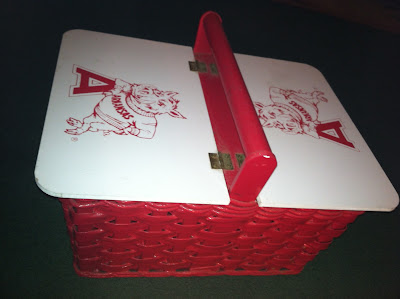 My big splurge of the day was this older Arkansas Razorback Picnic Basket.  When I brought it in, The Breadman said, "Finally a picnic basket I like!"  But, too bad - it's going to the booth.  I spent $15.00 for it, but I know one sold for about $50.00 at the booth last Fall.  So, I will make it part of my (much hated and dreaded on my part) Razorback display in August.  Those "Roadhogs" with the huge RV's and deep pockets just love that vintage razorback tailgating stuff. 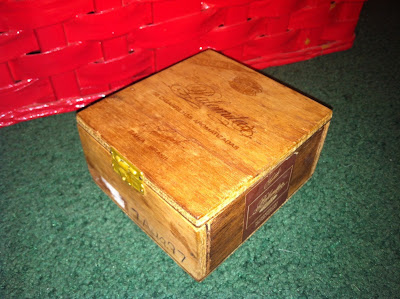 This tiny cigar box will go in my cigar box collection.  Oh, yes, I collect them.  Surprised?  I thought not. 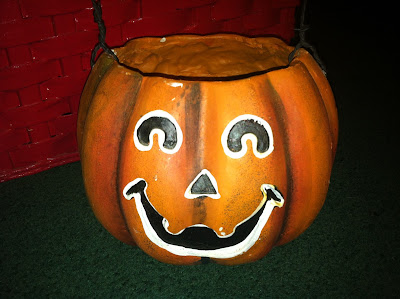 A large paper mache pumpkin that isn't old but looks it and that is good enough for me.
Especially since it was only 25¢. 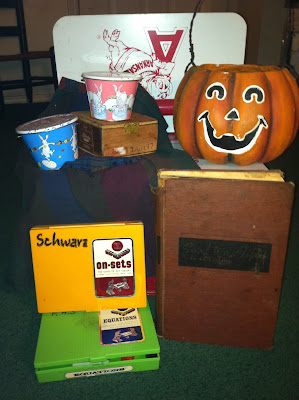 I also found two old Math Games, two Easter pails, and a vintage apron to round out the day.  It's all for resell.  Except that Food For Fifty book.  It will be resold eventually, but I've got some Scrapple to make first.

Have you found any good junk lately?  I'm just scrapping by on what I find lately.