I wasn't sure I would get any Christmas Candy made this year.  But, a few days ago I decided rather than making a HUGE mess in the kitchen and making a million dishes I could make one kind of candy each day with minimal messes.

Well, that was good in theory, but once we got started, we just kept on going.  I usually do things like this in the afternoon once my usual chores are done.  But, since I am at therapy with my Mom from about 2-6:30 every day, I had to start early in the mornings.  It's hard to get your sweet tooth going at 9:00 am.  But, I prevailed.  :D

The thing about the Christmas Candy we make - well, the Fudge we make - we have no recipes.  We make different things each year and we completely wing it when we make it.  Every thing we have ever made has turned out pretty darn delicious if I do say so myself.

The secret to our concoctions is sweetened condensed milk and Vanilla Almond Bark.  One one pound package of almond bark and a half a can of condensed milk is the base for all of these creations.  Break up the almond bark, microwave it for two minutes, stir until smooth then add the condensed milk and assorted goodies.  This is by no means suggesting that this is easy or hard or that anyone would want to make it.  It's just the way we "wing" it and the yumminess that prevails in the end. 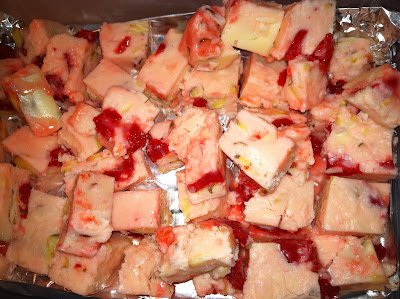 This one has a jar of Maraschino Cherries and a big handful of sliced almonds added in.  I drained the cherries, cut them in half then let them dray a while on a paper towel before I added them into the mixture. 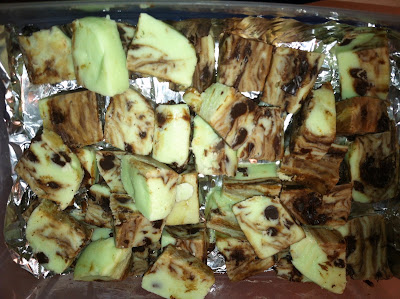 This time we added Mint Extract - about a tablespoon full and a half a bag of semi-sweet chocolate chips.  I added half of those chocolate chips to it so they sort of melted, then added in the rest when I had the mixture in the pan.  That was there is a ribbon of mixture of mint and chocolate and a bite of a chocolate chip too.  We added two drops of green food coloring to give it that minty color. 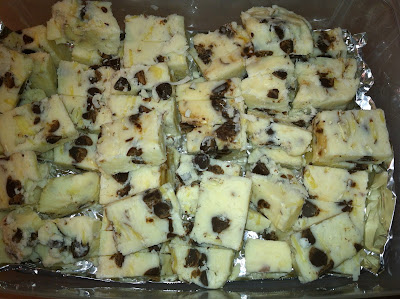 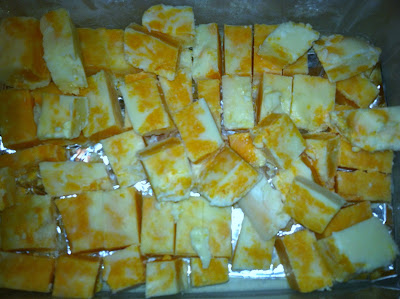 We went to a Craft Fair this Fall and bought some fudge at the Fudge Stand.  One of the flavors they had was Creamsicle.  I couldn't think of how on earth they made it.  Orange extract has a true orange flavor and  that isn't what Creamsicles taste like.  I had been thinking about that fudge for a couple of months and knew I HAD to figure it out.  So, I made the almond bark/condensed milk concoction - poured half of it into a bowl and the other half into the buttered dish.  Then, I added....are you ready?  A package or unsweetened orange Kool-Aid to the rest and stirred it up.  Poured that on top of the vanilla portion and swirled it with a knife.  Once it set up and I cut it - I kid you not, that stuff tastes exactly like a Creamsicle.  Whodathunk it?

Did you make candy this year?  What kind did you make?
Posted by Shara at 11:32 PM