The Week in Junk & Hospital Talk

Ah, now you weren't expecting that Week in Junk title from me now, were you?

But, first an update.  Wednesday afternoon an doctor showed up in her room and said, "I can put cement in your back and fix it so you won't have to wear that brace anymore."  WHAT?  We were beyond excited.  Thursday he came back to look at the brace, pulled her blankets down and looked at it, commented on her neck brace and said he would think how to make her comfortable, then said they would be up to get her in a few minutes.  Three girls came and got her and off she went in the bed.  They told me to wait in her room for a few hours and she would be back.  So, I turned on the TV, got settled in a comfy chair and got out my bag of Christmas Vanilla Tootsie Rolls (that I had found the day before on a quick trip out the day before) and got ready to wait.  But, a few minutes later, they cam rolling her back in and she was sobbing.  The doctor hadn't noticed her broken arm when he looked at her (helloooooooo???) and you have to hold your arms above your head when you have the procedure done, so it was a no go.  She was devastated that she would have to keep wearing the brace.  Within twenty minutes it was decided that she didn't need to be in the hospital anymore and they whisked her back to the Rehab Hospital.

When she got there, she felt better.  She said, "I am in the same place I was this morning (still wearing the brace), I didn't go backwards."  She is alert, feeling medically fine and ready to get going on her therapy. In fact, she had three hours of therapy today and she got out of bed for the first time in two weeks and sat in a chair all day.  She was elated to get out of the bed!  She had been tripping on Percocet earlier in the week and was not herself - crying in the night, paranoid, scared of everyone and thinking she was in trouble with everyone.  She took herself off all pain meds other than Tylenol which is amazing considering she has a bruised tailbone, pinched spinal cord, broken shoulder, broken vertebrae in her back and can't feel her hands.  I had been with her for 14 straight days and I could talk her out of her fears.  I was worried to death all night about her.  This morning the phone rang and it was the Rehab Hospital.  I about went down on my knees.  When I answered - It was my Mumsie!  She told her therapist that she wished she could call me to tell me that she had a great night and morning and he said, "I can call her and you can talk to her."  It was the first time in two weeks that I have talked to her, so it was a nice treat.  he said he can do it every day, no problem.  Her hands will get better in time and then she can call me herself.

So, I hope and pray she is on her way to getting back to herself again now.  It is so nice to be in my own house in my own bed.  The Breadman and The Bean have been running things around here and really helping me out.  The Breadman put a hold on the new job, and that was fine with the employer, he needed to help me and be there for our family for awhile.  The job is his when he's ready.  It's kind of weird that he never, ever missed work for 16 years with his old job.  He only missed two days that I can think of and that is when I had surgery.  But, all this with my Mom happened when he didn't have to leave the house for 15 hours a day.  The boys have been doing things around here and that helps a lot.  (Except no one has swept the kitchen floor in two weeks - what's up with that?)  :D

The hospital and rehab hospital are side by side and .9 miles from a Goodwill and a huge thrift store.  So, occasionally, I have made a mental break run to look for vintage Christmas.  Only a few times though because I felt guilty going.  Today I stopped on my way to see her because she needs some odd shaped little pillows to shove under her broken arm and under her head with that stupid neck brace.  But, since I was there.......:) 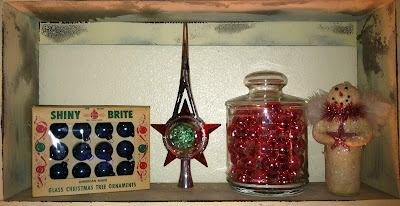 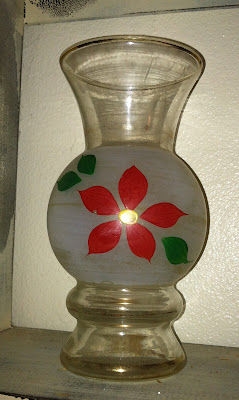 Gay Fad Poinsettia vase.  I have a customer that buys all the Gay Fad I bring in for her Mother who lost her entire collection in a fire. 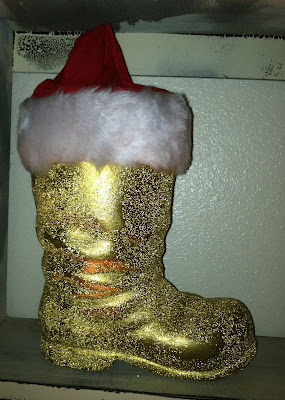 This gold glittered candy container is about ten inches tall.  It is looks new, but I assume it's old.  It's paper mache and covered in gold glitter.  It came in a bag with a few other good old ornaments including a German bobblehead which I cannot find in my current airhead status. 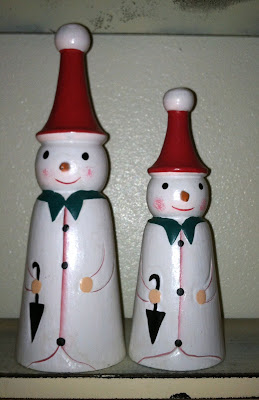 These two snowmen are new, but they were just too whimsical to leave behind.  I'm not sure if they stay with me or go to the booth.  But, if I know me, and I think I do, they will probably stay with me this year anyway. 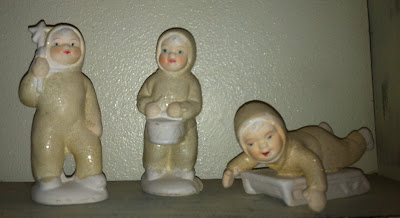 These snowbabies were in my own booth.  I bought them a few weeks ago and took them straight to the booth.  Today I looked at them and thought, now those are cute.  So, I brought them home.  Originally I thought they were just cute, but today I realized that they are kind of old too.

Two other finds lately, but not thrifted. 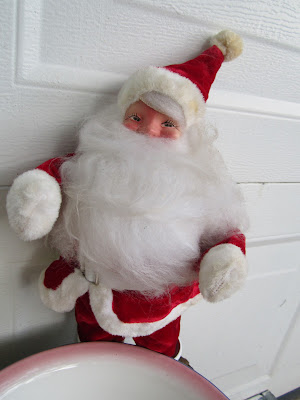 I bought this old Santa in October for 25¢.  I was a going to put him on ebay, but I decided to throw him in the booth with a $25.00 price tag.  One of the other vendors saw it and asked if I would do a trade.  She makes these great handmade signs so I requested a sign that said GROCERIES.  I've always wanted an old Grocery sign to hang in my kitchen.

It's about four feet long and 15" tall.  I think it's great and I only have a quarter invested in it! 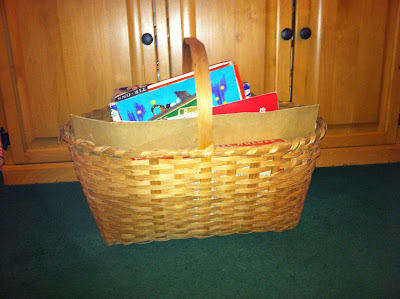 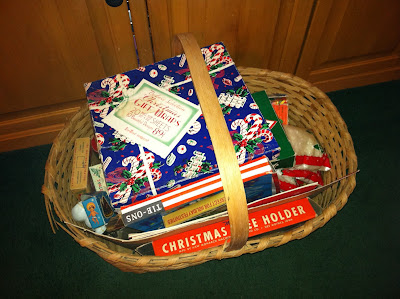 I wish I could trade and barter for goodies like that every day!

So, thanks for reading the longest blog post ever and for all your good wishes.  **Fingers crossed that everything continues to go well with my Mom.**  And, that I get back in the junking spirit.

*Also - I started decorating for Christmas!  Yeesssss!
Posted by Shara at 11:15 PM