A Tisket, A Tasket, A Different Type of Basket

A couple of weeks ago, my neighbors were having a yard sale.  They were still bringing things out when I stopped.  They used to own a Radio Station and a Mexican Restaurant (not at the same time) so they had some different things like industrial coffeemakers, thirty five sets of glass salt and pepper shakers and other oddities.  Since none of it was the sort of thing I usually buy, I had to take a second look at everything with new eyes.

Source: littlebirdiesecrets.blogspot.com via Shara on Pinterest
(I do wish I would have seen this photo on Pinterest before I passed on all those glass shakers though.  I have a metric ton of glitter and I could have filled them all up.  Oh, well.)
Anyway, some of the shakers were in a red plastic hand held shopping basket.  I had one from a Drugstore, but it cracked and I can't use it anymore.  I used that thing all the time - I carried things to the Flea Market, packed things in it to take in the car, packed bulky picnic items, sorted Christmas ornaments in it and so on and so on.
When I realized that I was looking at a shopping basket, I asked if it was for sale.  I do see them from time to time, but they aren't normally for sale.   The girl said, "It is for sale and we have more."  Then she pointed to the other side of the driveway. 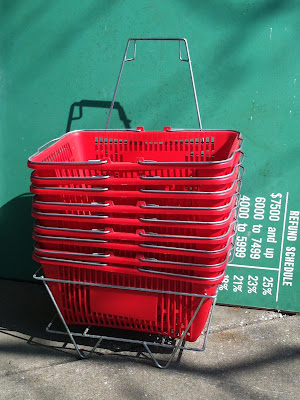 Yeeeees.  An entire rack of baskets!  Ten baskets!  Woot!  I paid $15.00 for the whole thing, much to the chagrin of the man buying the industrial coffeepot that was oogling them too.
I really, and truly thought I would sell them to the owners of the Flea Market.  I asked but they didn't think they needed them.  (I always grab a handheld basket at places like that, so I think the DO need them)  I thought I might put them on Craigslist too.  Because, they are meant to be in a store, right?
But, you know me.  They are in my garage and I am using the HECK out of them.  I used them to sort my Easter items.  I used them sort items at the booth.  I used them to sort some craft supplies the other day.  I love them!

Source: google.com via Shara on Pinterest
The only thing better was if I could have found a set of the old collapsible shopping baskets.  But, until then, these are pretty darn handy!
*Baskets are in front of a HUGE chalkboard headed to the booth.  It's about five Feet tall.  Fingers crossed it will sell f-a-s-t!
Posted by Shara at 10:55 PM