Last Thursday I made a ten minute run to a yard sale at the other end of my street.  The ad said they had 50 tackle boxes and lots of lures.  I know nothing about fishing stuff, but I figured if they had all that old stuff, maybe they would have some other old stuff too.  I was wrong.  Just a lot of stuff in general.  So, I dropped any hopes of finding Vintage and just looked at what they had instead. 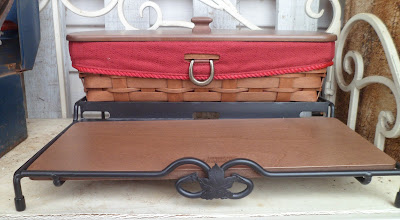 When I spotted this basket tray wrought iron thingy, I thought it looked like Longaberger.  I see Longaberger at sales a lot, but it almost always has $20 or $30 prices on it.  I always look at the price though, because you just never know.  This was priced at $4.00 and included the basket, lid, fabric liner, plastic liner, wooden divider, two smaller dividers, wooden tray and wrought iron tiered holder.  I knew it had to be worth more than $4.00, so I picked it up. 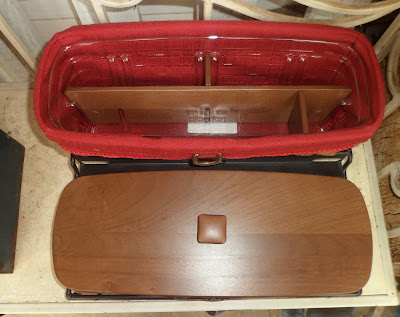 When I paid, the lady said, "I never did use that thing."  I asked what it was for and she said, "I thought Bagels and stuff".  I didn't think that was right and I was glad she hadn't used it.  When I got home, I did some research and discovered that is was a Charging Station and Mail Sorter.  One had recently sold for $128.00 and there was one currently on ebay with a BIN of $104.00, so I decided to list mine at a BIN of $100.00 just for fun.  I thought someone would bid on it and that would be the end of my BIN.  I started the auction at 20:30:29 and it sold at my BIN price at 20:34:08.  That is less than four minutes!   I can't even imagine how the buyer found it that quickly.  But, I am glad she did!  After shipping (I undercharged a couple bucks because I ended up needing a bigger box that I anticipated), ebay fees, PayPal fees and bank fees - I still cleared about $80.00.  Not a bad return on my ten minute stop and  four minute sell time!
Posted by Shara at 11:29 PM