Much to *The Breadman's chagrin I am indeed "dragging in all that Christmas Crap".  I feel like I am running behind, but that is partly because we had Thanksgiving nearly a week early, so it feels like I am a week late in my decorating.  I have to keep reminding myself that it isn't even December yet!

*If you read my previous post about putting him on a time out for saying that.......A few hours after he said it and he was a grouchy bear all day......he ended up getting very sick with a stomach bug.  Oh, the sounds I heard in that bathroom.  He vomited for hours.  It passed quickly, but it was not a fun day.  No sirreeee.  He's still not a holiday fan, but I will cut him a little bit of slack since he did get sick.

On the line of complaining - I have done my fair share of that in the past week.

One day last week, I was running late, so I decided to pickup some pre-made General Taso Chicken and a bag of veggies for dinner. 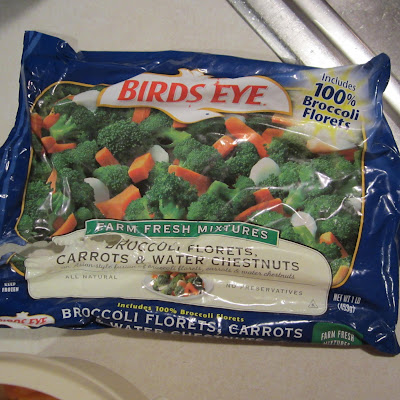 I bought this bag of BirdsEye BROCCOLI, carrots and water chestnuts to make a stirfry.  I love broccoli  - it is my favorite veggie. 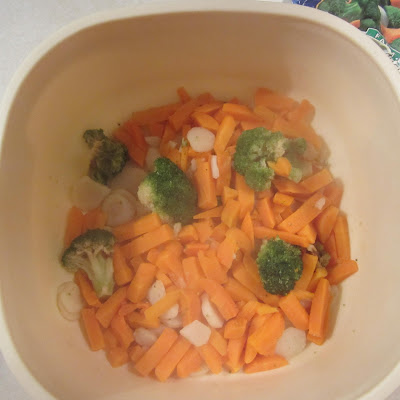 When I opened the bag, here is what I found.  Four pieces of edible broccoli, one piece of hard brown broccoli and a zillion carrots.  Ick.  I wrote the company and they are sending me a replacement product coupon.  So it does help to complain.

Saturday night, I had a rather unpleasant experience with a local Dollar General employee.  It actually had nothing to do with the store, but the employee.  We had gone to a Christmas parade and people were parking up and down the street an in parking lots.  The police had all the streets blocked off, so you couldn't even shop at any of the local stores during that time even if you wanted to, and who would bypass going to a parade just to go shop?  Anyway, as the parade was coming up the street, an employee came out and started YELLING, "I am having all the cars TOWED in the DG parking lot".  He walked up and down the street yelling at everyone, ranting, throwing his arms in the air, etc.  He had the phone to his ear saying, "Yes, come immediately, I need a tow truck!"  He really made an ass of himself and did not represent the DG company in a very good light.  What a way to treat people that were going in there buying drinks, snacks and even gloves before the parade and might have gone back after for some items as well.  I had intended to go in for a few things, but changed my mind after his little rant.  What a way for a company to represent themselves in a time when they need business and want shoppers to come in this time of year!  When we got home, I decided to contact customer service and let them know what happened.  Well, yesterday, I had a very nice message from the District Manager who was not at all  pleased about what had happened and promised me that he had spoken to everyone and that would NOT be happening again.  It was really nice to see that people do care about customer satisfaction. That goes a long way with me in how I see a company.

I often write companies and tell them that I LOVE their products too.  I don't just complain!