Yesterday I went to one good yard sale and bought a lot of things.  Well, I really only bought three things.  I take that back,  I only bought two things - one was free.  I bought a microwave cart which, upon getting it home won't fit where mine is now.  Drat.  It is nice - expandable Butcher Block top, doors and drawers for storage.  I think I might try to work it in somewhere else in the kitchen to hold my Kitchen Aid and use it as my Baking Station.  That will be a someday project as a lot of JUNK will have to go first!  The second thing that I bought - I actually bought 50 of them.  I bought 50 Beanie Bear Teddy Bears.  Now - before you think I have officially lost my mind.......they were mint with tags and tag protectors and they were only a quarter each, plus the lady ended up only charging me $10.00 for all 50 of them.  I consistently sell them in the Flea Market for $3-$5 each, so it is a definite money maker.  (Minus the ones that The Bean stole for his collection like the Princess Diana Bear, The End, etc.)  And, the free item, was a Redmon Baby Bassinet that matches my picnic baskets.  I have not allowed myself  to buy one, even though I do see them from time to time.  I have no need for it and I have no room for it.  But, geez - it is like new, it was in the FREE pile and the guy at the sale loaded it for me.  You can't get it much better than that!
Today The Bean and I went to the Farmer's Market with my Dad.  Our Farmer's Market is very full of vendors with fruits and vegetables as well as baskets, pottery, jewelry and other artsy items.  There is also a vendor that sells cinnamon rolls as big as your head and other gooey delights.  I go in mind to buy fresh produce, and I do, but somehow something gooey comes home with us too.  Today we chose a Elephant ear - a piece of puffed pastry dusted with sugar and cinnamon.  It makes a huge mess to eat it, but that's half the fun! 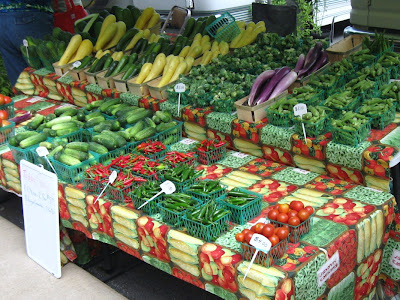 The Farmer's Market also features tons of artsy folks playing music in different areas, guitar cases open waiting for donations.  Today I had the misfortune to stand in a long line this.close to an Accordion player.  Not to be mean, the Accordion is a darn fine instrument and hard to master, I am sure.  But, it was right beside me, very loud and oh, so annoying. 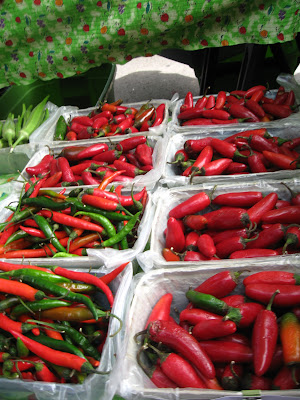 ﻿
The Arkansas Farmer's Market has a wonderful program for Senior Citizens that gives each household a voucher for $50.00 worth of Fresh Produce.  My Dad gets the vouchers and invites us along to help him shop and he shares the bounty with us.  I used to feel guilty if he gave any of it to us, but he has to spend a minimum of five dollars at each booth and for five dollars you end up getting twelve huge ripe tomatoes or twenty cucumbers - it's more than he can eat before it gets bad.  I think in time they will adjust the vouchers to two or three dollars each or the Vendors will come up with smaller baskets to buy for that amount.  Between what he bought, what we bought and what we shared, we ended up with tons of wonderful fresh veggies and a bag of ripened peaches that I cannot wait to slice up.  Also, my first garden ripened tomato on a TBLT* is on the list tomorrow.  (Turkey Bacon, Lettuce and Tomato).  Mmmmmmmmmmmmmmm. 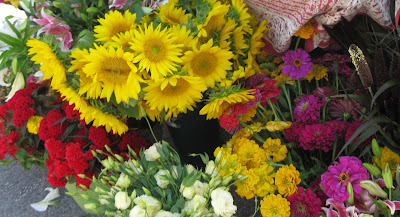 Nearly everyone buys a huge bouquet of fresh flowers.  There are so many to chose from and so many varieties.  One Vendor had only sunflowers and they were gorgeous. 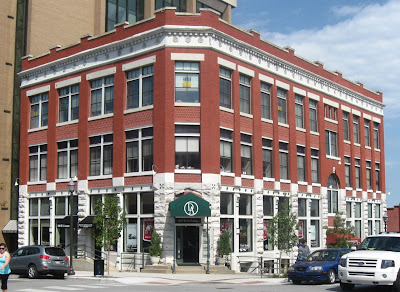 After we shopped, we did one of my favorite things - watched the people come and go.  Most people bring their dogs, so it is a spectacle of people, babies, kids and dogs.  One lady even had her cat!  I saw a Great Dane big enough to ride and a teeny tiny bog smaller than my hand wearing a teeny tiny orange Polo Shirt and every sort of dog in between.  I also love the old architecture around the square.  This building houses a very upscale jewelry store, but people were going in and out of it like it was the Dollar Store.  I think I would be nervous to even go in the door! 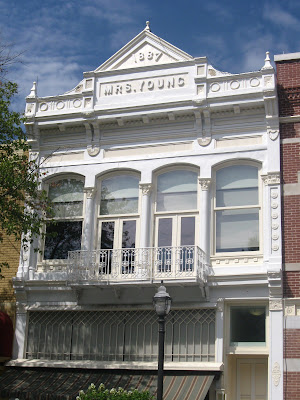 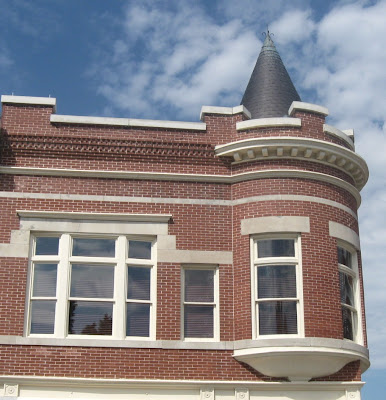 This is the second story of the bank.  I love the little turret on the side.  I bet whoever used to live there looked out the window and watched Mrs. Young next door!
And lastly, I spotted this sign as we were walking around: 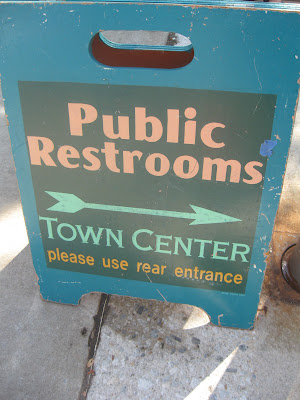 Rear entrance...snicker...is there any other way?
So, what did you do this weekend?
Posted by Shara at 10:51 PM