Life has returned to normal and I have managed to fit in a little junking again.  I thought I would be sick of stuff after the Estate Sale, but none of that stuff was my taste and I had touched it and looked at it all for so long that I was ready to get out and look at some different junk.  Does that make sense?
On my birthday, after we all went out to eat, I snuck next door to Goodwill for a late night junking trip.  I had no idea that Goodwill was open until 8:00 at night.  Although, honestly, if I am not home by 5:00 pm, I think I will turn into a pumpkin.  I just don't like to be out at night - even when it does stay daylight until 9:00.  This is the Goodwill that opened about two weeks ago (the one I forgot to go to on Opening Day!).  When it first opened, it was full, but not stuffed and prices were a bit higher than I liked.  But, this week, the store was packed to the gills and the prices were much more reasonable.  I had a $20.00 Birthday Bill burning a hole in my pocket, so I shopped until I dropped! 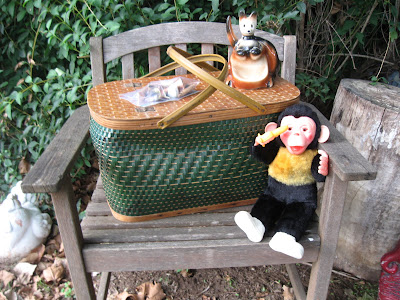 When I saw the Hawkeye Basket, I held my breath until I looked at the price.  It was the first thing I saw and I wanted it!  $5.00 was the magic price, which also happens to be my max price.  Whew.  The Kangaroo Valet is always a good seller - it was in Pulp Fiction - so people collect them.  The baggie is chock full of miniatures for my Itty Bity Collection.  The Rubber  Face monkey will either live with me or go on ebay.  Haven't quite decided yet.  You know me and monkeys, right?
Speaking of monkey's - Let's take a time out from junking to show you one of my birthday presents.  Let's see if you can guess.  I am in my mid 40's and my Mom bought it for me.  Hmmmmmm...what would she buy me? 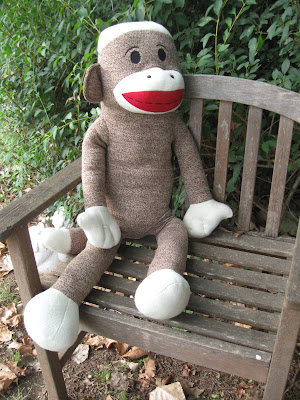 How about a giant sock monkey?  Makes sense, right?  It's just what every gal needs.  For the record, I think he is wonderful!
Okay, back to the JUNK! 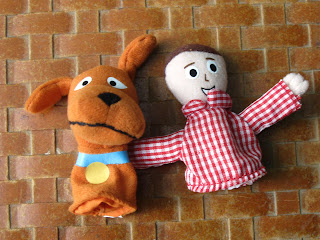 One last silly find at Goodwill - a set of Davy & Goliath Finger Puppets.  I loved Davy & Goliath when I was a kid.  "Oooooooooooooh, Daaaaaavy."  I bought a few other things, which in my advanced age, I forgot to photograph.  Harhar.  I got a Wilton Pewter ABC Baby Cup and a few other things too.
Today, I dropped the boys off at the movies to see Captain America***.  (I simply could not go see one more movie involving Super Heroes, Robots or Talking Cars!)  After I dropped them off, I had an ALL ME day.  I went to the Flea market, a Thrift Store, Hobby Lobby and Joanne's (my first trip there) all by myself just like a big girl!  I only looked at what I wanted to look at  as long as I wanted to look at it.  It was awesome. 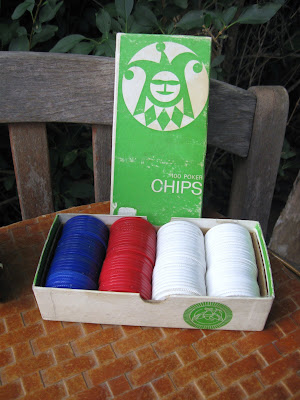 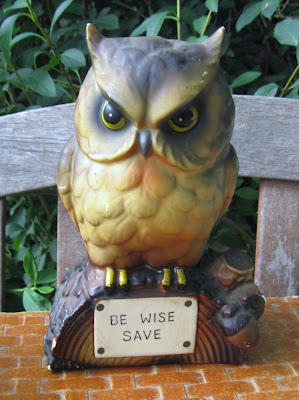 An Owl Bank - Be Wise.....Save.  Going to the booth because owl sell like hot cakes.  Figuratively speaking. 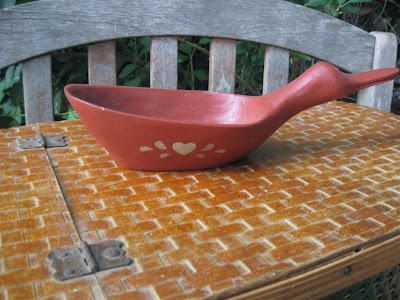 I had been looking at this old scoop for a few weeks.  The color coded tag had finally worked down to the 25¢ bin, so I bought it.  I am ho hum on the color and the heart is very 1990's County to me.  But, the scoop (yes, it is shaped like a duck too) is hand carved and cool.  Maybe a coat of white and some scuffing up will revive it. 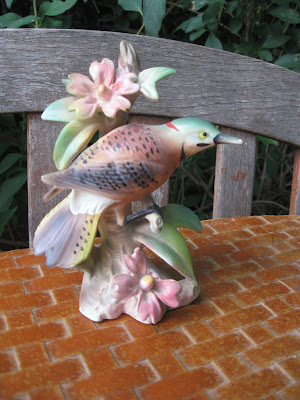 Another item in the 25¢ area - a sweet bird figure. 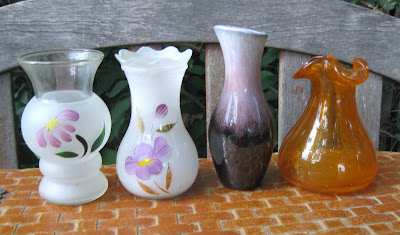 Four small vases the first two will go to the booth, the pottery piece will stay with me and I strongly suspect The Bean will snag the orange glass piece for his collection.  Those first two have a name, but it escapes me - anyone? 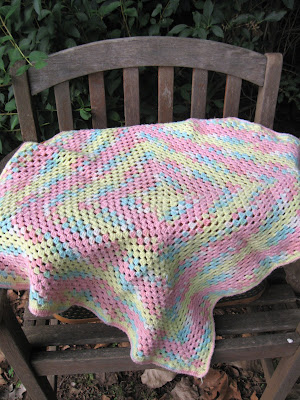 The last thing which I really did not need, but seems to be my newest obsession - a crocheted baby blanket.  It is tiny and perfectly done.
Tomorrow there is a sale close to me that is a house full all for sale.  The ad reads, "No offer will be refused."  Boy, are they going to wish they had never put that in the ad.  I know from experience - people are CHEAP!  (Even cheaper than me!  Shock!)
***When I dropped the boys to see Captain America, I had tossed the idea around of going to see "The Help" by myself.  I've never been to a movie by myself and I decided against it.  When I was leaving the theater, a bus from the local Assisted Living place came pulling in.  The boys told me that when they got drinks, there were nine people in wheelchairs and three on Walkers waiting for refreshments.  When "The Help" let out, they had to wait while the people literally rolled out of the theater in wheelchairs, rollerators, walkers and canes.  It was a funny sight when we are used to families and couples at the movies.  Good for them for getting out and going to the movies, though.
Posted by Shara at 10:24 PM