There's Gold at the End of the Rainbow

...and pink and red and orange and lilac and yellow and gold and green and lime and blue and indigo and silver and brown and...and......and.....more on that later.
I went to a Rummage sale today.  A real honest to goodness RUMMAGE SALE!  It was advertised as a "Crafters Dream" in an old trucking company office packed to the gills, room after room of STUFF.  I'm there! 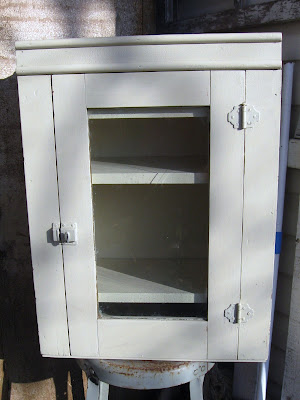 The first item I found was this fantastic chippy old cabinet. I lurve this thing. I should sell it. I should, really I should. But, I ain't a goin' to!!!!!!!!!!!!  It is about three feet tall and heavy as heck. 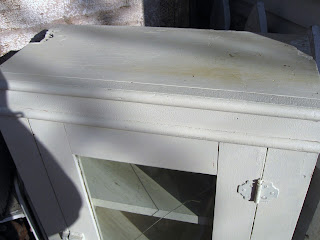 The boys already took the broken glass out of the door.  I hated it that the glass was broken, but had it not been broken, I doubt I would have scored this little jewel for the $12.00 I did pay.  Love it!  I am going to put a piece of screen in the window and fill it with all sorts of vintage goodness. 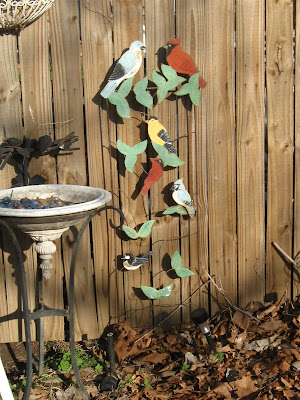 This sweet birdie trellis was $2.00.  I have a wild grapevine planted there and it will take the trellis over before long. 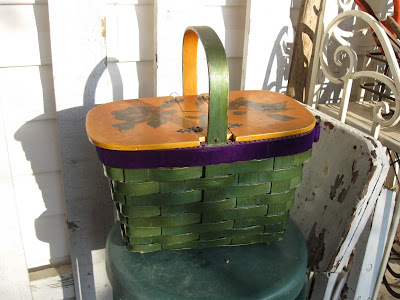 This 1970's decoupaged purse caught my eye, but initially only because I really needed something to hold all the little stuff I was carrying around.  So, I grabbed it to use as a shopping basket. 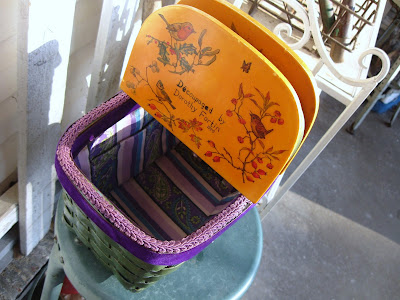 But, then I took a better look at it and decided it was pretty cute, so I bought it.  It will be sold somewhere, someway, someday. :D 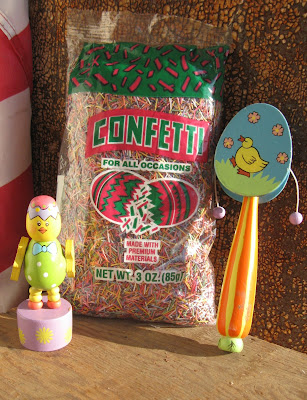 An old bag of Easter Confetti, meant to be used in Cascarones, which are confetti filled Easter Eggs that are broken over people's heads (ouch), a vintage Chicky pencil sharpener and an old wooden Easter noisemaker. 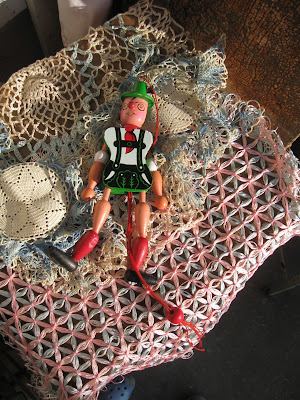 A fun old German wooden puppet (I have three now...uh-oh...another collection...) resting on a bed of a few of the thirty handmade doilies that I bought for a total of $5.00. 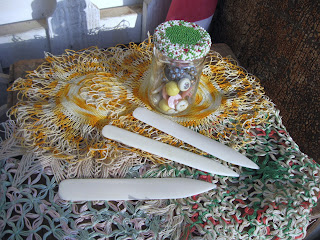 There are some beautiful doilies and tons of pretty pieces of handmade lace in those thirty pieces.  When I asked how much they were, the lady quoted me $5.00 for the pile, so I didn't even look through them.  Once I got them home and sorted, they are some of the most well done pieces I have ever seen.  Also an old jar of buttons with a hand beaded jar lid and three bone folders.  I have been trying to find a bone folder forever.  Now, I have three!  :)
Okay, now here's where it gets a little crazy.  As the ad said, there were a ton of craft supplies - mostly scrapbooking supplies.  I bought a bunch of envelopes, blank cards, envelope templates, Dresden, stickers and some other things mixed in amongst all the punches, ink pads, embossing powders, etc.  I don't do scrapbooking, and nothing was priced, so I didn't ask about much of it.  But, that's when I spotted the........glitter.  Loads of glitter. 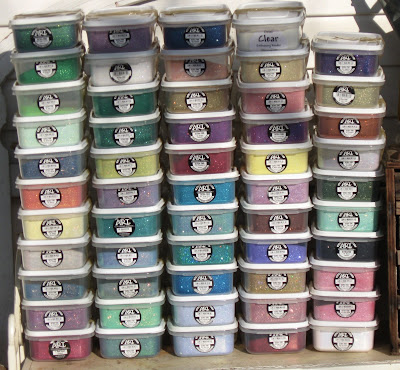 Freaking tons of beautiful glitter.  It is Art Glitter by Beverly Trombley.  I didn't know it was fancy pants glitter.  I just knew it was pretty and there was a metric ton of it.  Each of those containers holds 12oz. and they are all about half full.  I thought I would see how much they were and pick out a few if they weren't too expensive.  The girl shrugged and said, "I've been selling them for 50¢ a box."  Great Googley Moogley!  And then, I heard myself say, "How about if I bought it ALL?"  (Thinking in my head, "What am I going to do with all that glitter?")  So, she came around and counted it all up - there were 54 containers so that would be $27.00.  "How about $20.00 for it all?"  "I'll take it!" 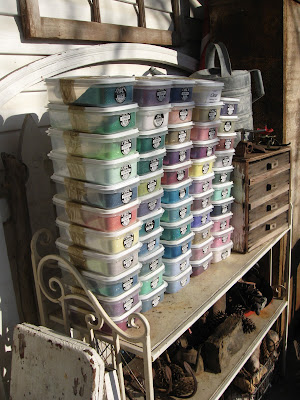 Glitter on the highway,

Glitter on the front porch,

*Name that tune........(They actually had this album at the sale and I didn't buy it.  I realize now that was an Epic fail on my part considering all that fabulous glitter I drug home!)
Posted by Shara at 11:13 PM